When I went to work at the Visitor’s Center today, the sky was sunny and blue.  There was not a hint of the predicted thunderstorms.

It was muggy this morning and the heat rose during the day.  By early afternoon, I had to close the door and turn on the air conditioning.  I was looking at things on the computer when I began to notice that the sky was getting dark.  I checked the weather report again and it looked like we were in for four hours of thunderstorms.  I went out to bring the American flag in and the wind almost blew it away.  I had just barely gotten it in when I began noticing raindrops on the window.  I opened the door and took a couple of pictures. 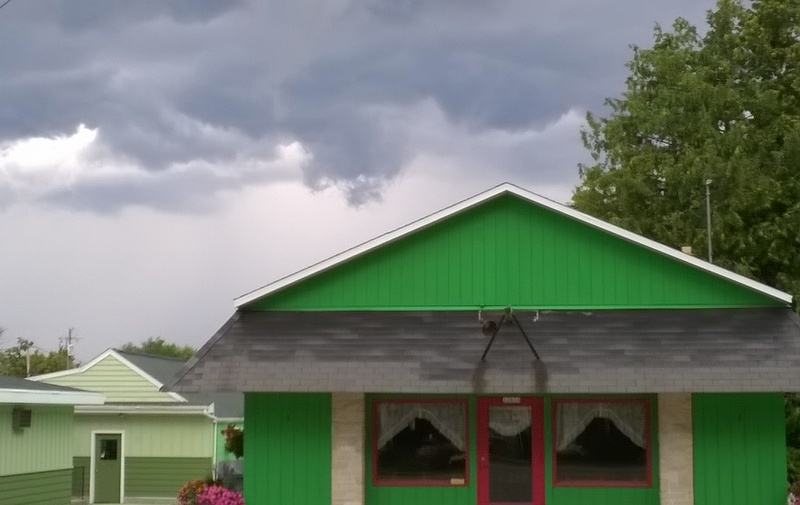 One of my visitors this morning was asking if there was going to be a tornado. Given the heavy wind and these clouds, I was beginning to wonder too. 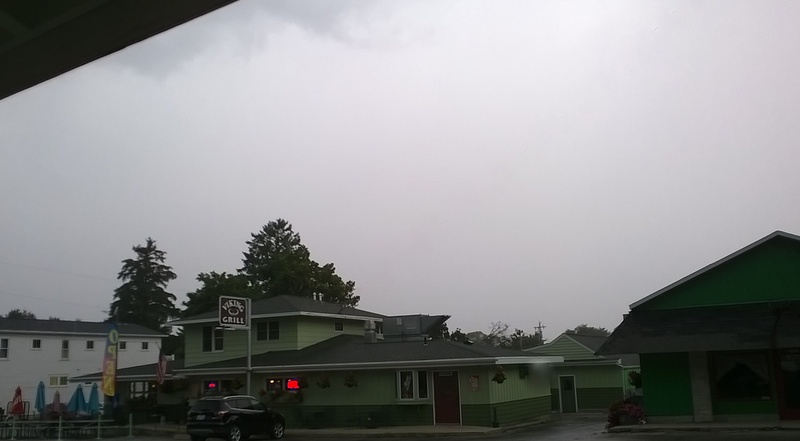 A few minutes later, it almost looked like night!

I don’t usually sweat it when there is a thunderstorm, but being in the tiny Visitor Center with the wind blowing as hard as it was and the rain beginning to come down so fast it was flooding the yard in front of me, I called Mark and asked him if he could come home early and pick me and my bicycle up at 5:00 when I got off work.  As it turned out, by the time he arrived, giving me the evil eye, the storm had blown over.  He had a bit more work to do so I rode my bicycle home.

When I got home, I noticed a reminder that we were supposed to go to a picnic at 6:00 this evening for the volunteers who worked the Antique Tractor Show the weekend before this last.  I called Mark and reminded him, not knowing he was backing into the back driveway at that moment.  We went to the picnic which was held inside a barn since the ground was still wet.  They were serving left-overs from the tractor show.  I had pulled pork, sweet potatoes, salad, baked beans, and a piece of strudel.  Mark had brats and so much other food that he used two plates and then went back for dessert!  The food was good and everyone was friendly to us even though we don’t officially belong to the Liberty Grove Historical Society which put on the tractor show.  We had a good time.

We arrived back home and had just gotten inside the house when we saw the sky light up and heard more thunder.  I went out in the rain and got this picture of the sky from our back deck…

Kind of an odd pinkish/purplish color.  Can you see a heart in the branches?

Anyway, tomorrow is supposed to be nice again.  We’ll see what the morning brings!

I wanted to give an update on my pastor, Nancy.  I believe she left today for Cancer Centers of America in Zion, Illinois and won’t be back until Thursday.  She told us yesterday that they have what they call “Mother care”.  The mother of the man who started these centers went through cancer treatment and was not treated well.  He developed these centers to treat everyone like he would have liked for his mother to be treated.  Nancy said that they have lined everything up for her.  She will be staying somewhere where she will only have to pay $25 per night.  There is shuttle service from her lodging to the treatment center. They have given her vouchers for three meals a day in their cafeteria.  At least on this first trip, they will pay mileage for her trip there.  They will be doing some testing and come up with options for her treatment.  You heard me right: Options!  They will leave the choice up to her between several options they will present her with at the end of this stay.

She said that God has also produced a change in her thinking.  A couple of weeks ago, she was digging her heels in and saying, “I don’t want to have chemo.”  Now she’s saying, “Bring it on; let’s do this!”  She said she might even ask them to give her her first treatment while she’s there this week.  She’s tired of waiting and just wants to get things going.  Please continue to pray for her.