First, some news about my pastor, Nancy.  I believe I had last told you that she was not going to have a mastectomy.  That was the news she told us all when she sent a phone call out to the church.  Ten minutes later, the oncologist called her and told her that not only was that still a possibility, but the doctor wanted her to have a port put in to start a sixteen-week course of chemo.  My pastor was too devastated to call back.

The next Sunday she told us the bad news and said she will likely be sick and lose her hair.  This last Sunday, there was further word.  Even with the fundraising drive that has been going on for her, Nancy and Dave were being asked to pay $20,000 for just the first two weeks of chemo and they were feeling the weight of how much this would cost due to the fact that her insurance wasn’t going to cover it.  Finally, they decided to call her insurance company and see what suggestions they might have.  In the course of the conversation, the woman they were speaking to said, “We are contracted with Cancer Centers of America. If you go there, you will never see a bill.”  Making the change delays her treatment a bit, but she said they both felt this burden lift when they decided to go with Cancer Centers of America.  Furthermore, the closest center is only three hours drive from Sturgeon Bay, so the trip there will be easier than the one to Chicago would have been.  Nancy was sporting a cute new haircut on Sunday in preparation for losing her hair when she starts the chemo.  Praise the Lord for the financial relief, but please continue praying for her as she prepares for the next stage.

I drove myself to church on Sunday (I have been carpooling with another woman who lives in Ellison Bay for the summer) so that I could go volunteer at the annual Antique Tractor Show and Arts and Crafts Fair.  The event was being held by the Liberty Grove Historical Association as a fundraiser.  I kind of got finagled into it while I was working at the Visitor Center a couple of weeks ago.  A woman came in with a poster about it and told me they didn’t have enough volunteers and asked if I’d be willing to volunteer.  I said I would, so there I was!

When I arrived, I was told to go to the Popcorn & Ice cream table.  There were three of us working there: a man to take the cash, a woman who scooped the ice cream, and I tried to sell bags of popcorn.  The temperatures were in the 80s on Sunday.  Between popcorn and ice cream, guess which one more people wanted to buy? 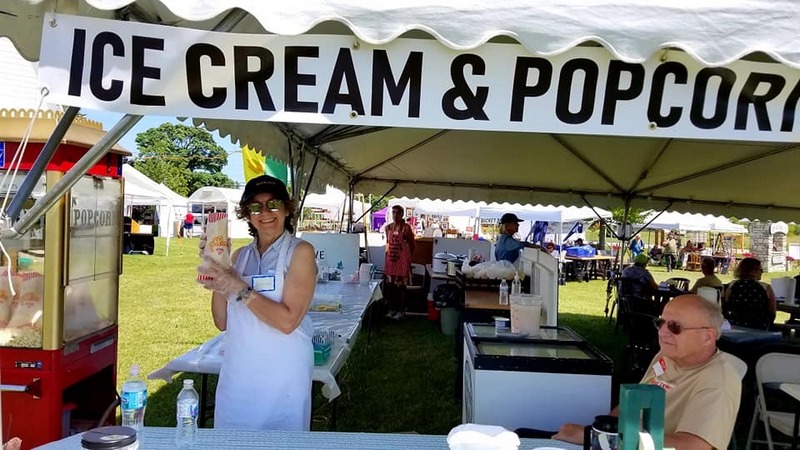 I called out to passers-by, “Would you like some popcorn?” All it did was drive customers to stop by and ask for ice cream!  The man beside me is Lee, the cashier.

Towards the end, I was sent to help make calls to winners of the raffle drawing and the bucket drawing.  It was fun to tell people they had won!  When I finished with that, I had a little time to go around and look at all the booths briefly before time to start tearing down the show which I helped with.  I’ve never been to the Antique Tractor Show before.  It was kind of like a good old fashioned country fair on a somewhat smaller scale.  It was fun!

That brings us to today.  Kader’s birthday is on August 1st.  Mark and I had hoped to have a birthday party for her tomorrow night.  Mark needed the truck today and dropped me off at work.  He picked me up and we went to pick Merih up so that he could help Mark work on his car, but on the way home, Merih told us he will be working tomorrow night.  That necessitated an immediate change in plan.  Mark and Merih dropped me off at home and went back to get Kader.  That gave me time to wrap her present, write in her birthday card, and tidy up before she came back with the boys.  She didn’t know what we had up our sleeve.  Mark and I fixed dinner while Merih and Kader played with Tucson in the living room.  It appeared to be a normal dinner, but while Kader finished her dinner, the rest of us all went to the kitchen.  We had bought cheesecake and some candles.  The cheesecake was still frozen and the candles were skinny, so it was difficult to get them in, but we managed and then we lit them and sang Happy Birthday as we carried the cake into the dining room. 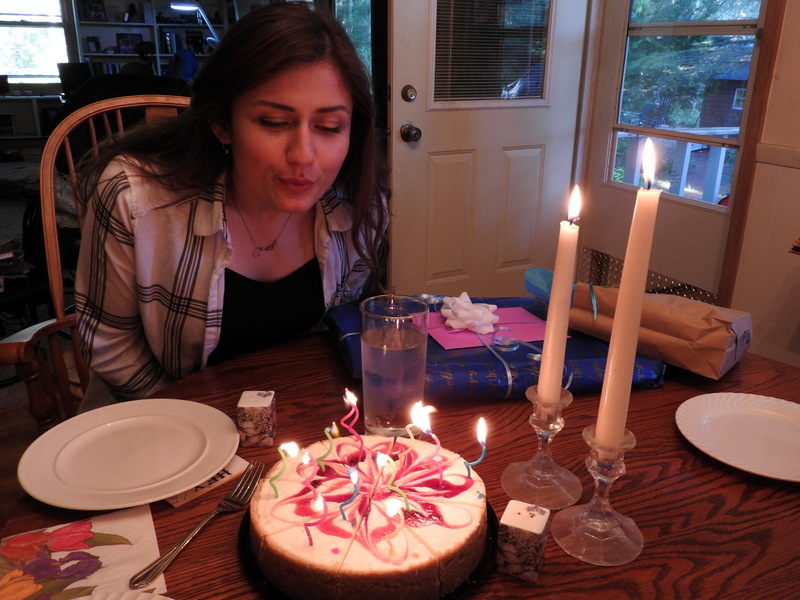 A pile of presents 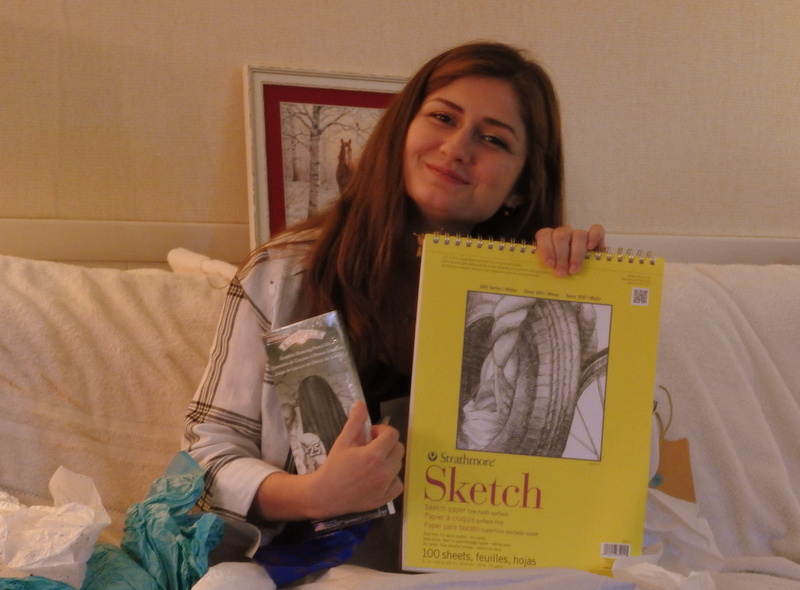 We gave Kader a sketchbook and a set of art pencils. 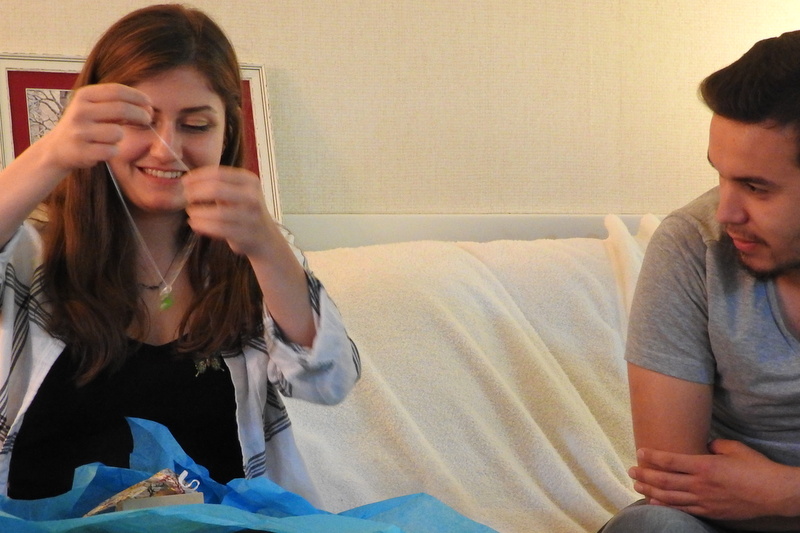 Merih gave her a beach glass necklace from Door County that I helped him choose this afternoon. 😉 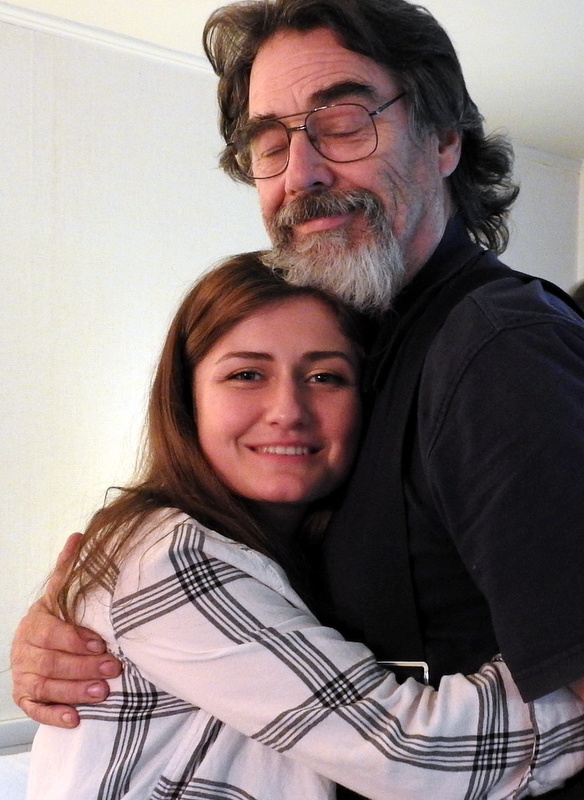 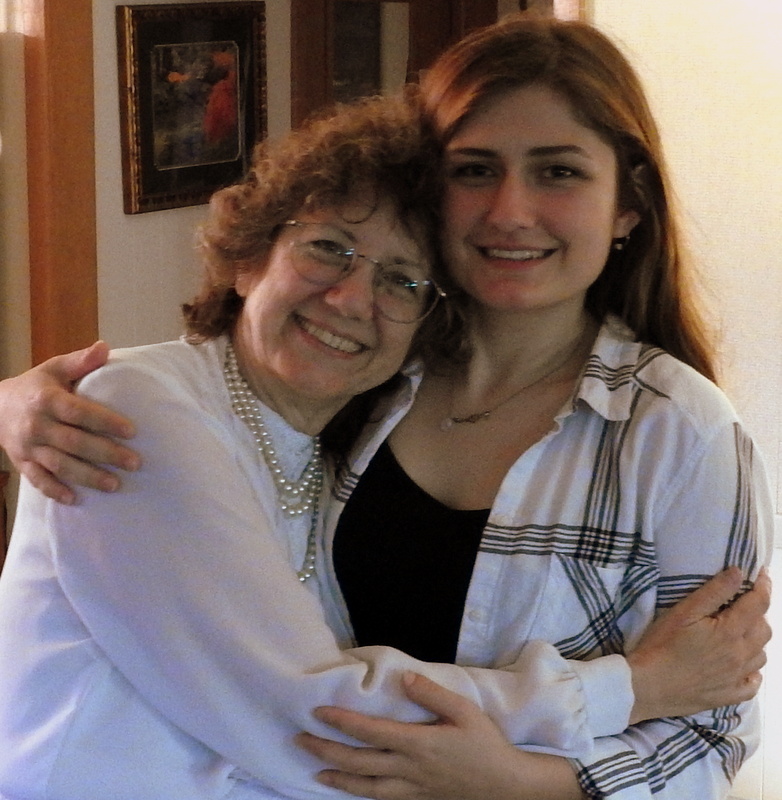 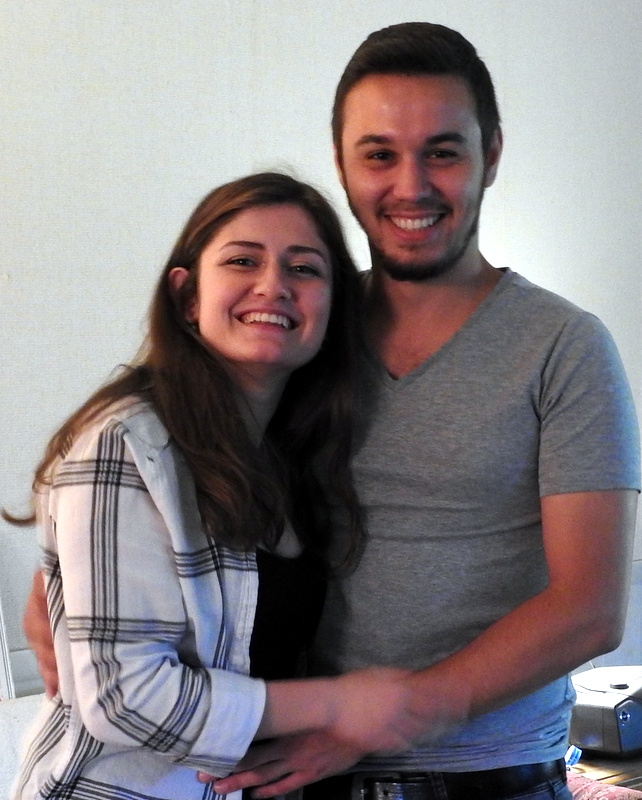 We had picked up a movie to show her tonight as well, but her friends had plans for her at 7:45 so I took the kids home after our party.  Things are more hectic at work for Merih and Kader is beginning to do things with the friends she is making here, so it’s getting to be a little more difficult to find times to do things with them.  In a way, this is good for them and for us.  I’m glad that Kader’s friends are having parties for her birthday as well, and Merih could use some extra work to make up for the money he paid (and is still paying) for his new car that is sitting in our driveway!  They are good kids.