Today is Kader’s twenty-first birthday.  I managed to get tickets to a play so that we could take her tonight.  First, at Merih’s invitation, we took her to dinner in the bar at Sister Bay Bowl.  That’s where he works and he wanted to serve us.  We sat facing the bowling alley and enjoyed watching people of all ages play.

Sadly, we had to leave Merih at work this evening, but it was nice for us to have an evening alone with Kader.  I told her to bring her sketchbook and pencils, so on the way to the play, she drew a picture. 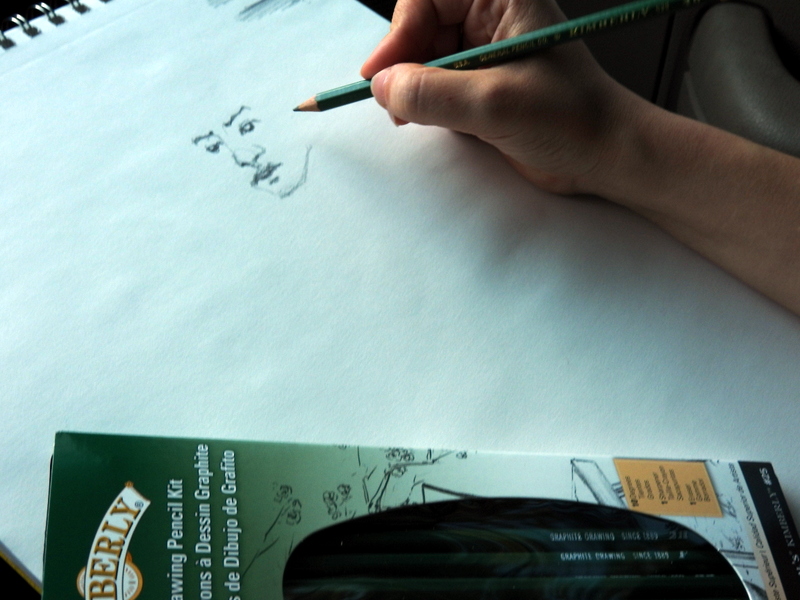 She drew this in a moving vehicle. I was amazed that her hand could be so steady while we were bouncing around.

I asked her questions about the university she is attending in Turkey.  She had to take an exam where they told her to draw an old person, a young person, a bus depot, and a newspaper.  It took her three hours to complete the exam, but she was one of 180 students they selected out of eight thousand applicants!

I got free tickets through my work at the Door County North Visitor Center.  The theater is in Juddville and it’s called Peninsula Players.  They were doing a final dress rehearsal and gave tickets to businesses in the tourism industry so that we can tell people about the play.  That’s the only way Mark and I could afford to go.

When we got to the theater, Mark dropped Kader and me off while he went to park the truck.  I showed her the garden behind the theater and suggested she look for something to draw while I went to Will Call to pick up our tickets.  I found where she was sitting, drawing a statue in the garden, and then I went to get Mark so he would know where we were.  We had fifteen minutes before we had to go in and find our seat, so we watched her draw this in a short time span: 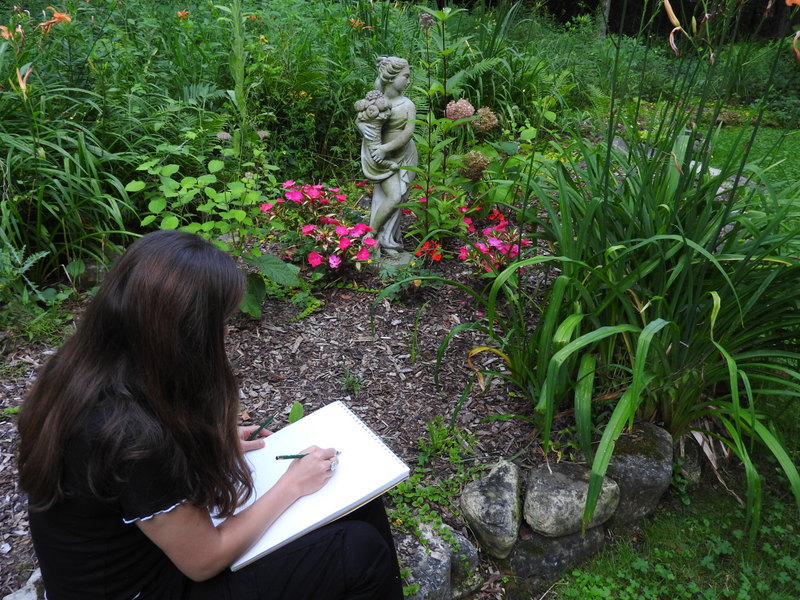 She sat in front of the statue and began. 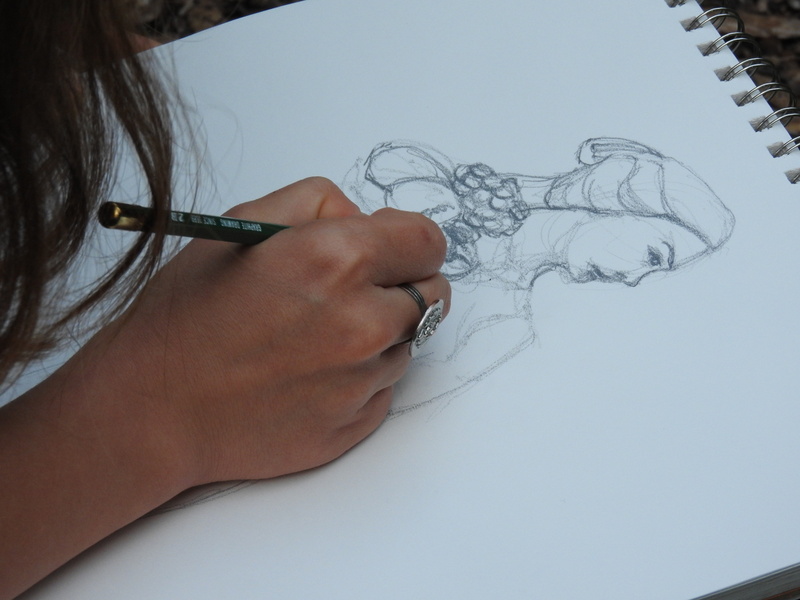 People would walk by respectfully and peek to see what she was drawing. 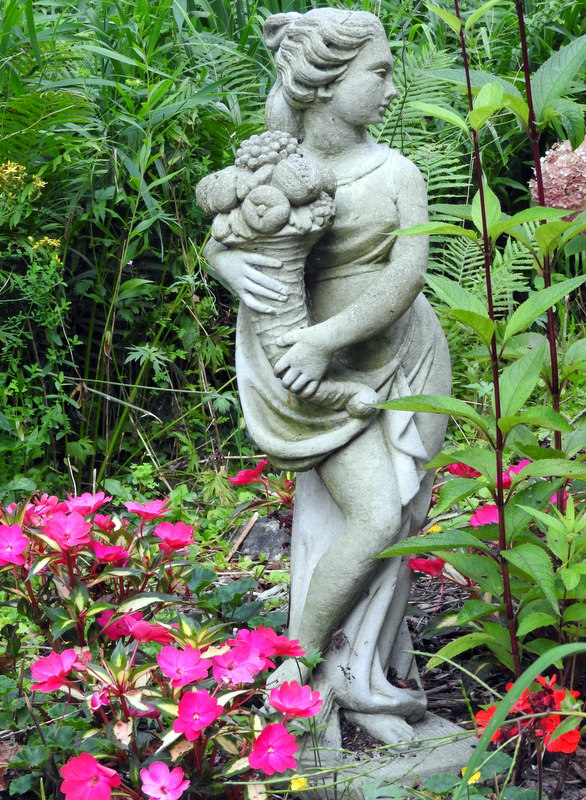 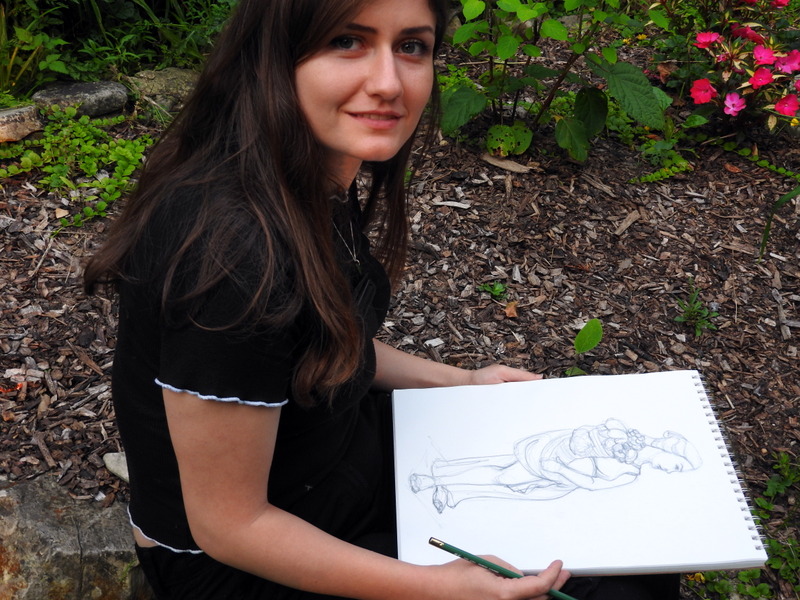 The play we saw was called “Ghost”.  It was a musical adaptation of the movie of the same title that had Patrick Swayze, Demi Moore, and Whoopi Goldberg in it.  Having seen the original movie, Mark and I thought this production was so-so, but Kader really enjoyed it.  It was interesting that she was able to follow it since her English is very broken, but as I was saying to Mark after we dropped her off, it’s good for her to be with us without Merih sometimes.  It forces her to have to come up with the English words to explain what she is trying to say, and she can’t turn to him for translation when we say something she doesn’t understand.  We just have to think of simple ways to help her understand.  I use a lot of hand gestures!

She told us this evening that besides the birthday cake we got her the other night, last night her friends got her a cake, and at work today, they had a birthday cake for her too.  She’s all caked out!  I asked her if anyone else got her presents, and she said that a couple of her roommates who are Romanian Christians got her a Turkish/English Bible.  Yay!!!

We used to sing a song in Sunday School when someone had a birthday:

Happy birthday to you!  Only one will not do.  Take the gift of salvation, and then you’ll have two!

Happy birthday, Kader!  May you have more reason to celebrate soon!