Last week, when we went to pick Merih up from the place he is staying, we noticed he was talking with a beautiful young woman outside his room.  At the Bridges event last night, he introduced her to us.  Her name is Kader (pronounced Keh-DAHR) Sirtikara.

Merih wanted to get a haircut in Sturgeon Bay today, so I told him I would take him.  I told him Mark would be at work, so he asked if he could bring Kader along and I said “Sure!”  She is also from Turkey.

Kader’s English is very basic.  I asked her questions on the drive to learn a little about her, and often she would turn to Merih for a translation.  This is her first time to Door County and basically, all she’s seen so far is Sister Bay and Ellison Bay, so I took her down the east side of the peninsula and up the west side.

As we were going through the first town on the way down, Bailey’s Harbor, I stopped at the marina so she could see it.  It also happened that there were several people out on the water windsurfing which Merih enjoyed seeing.  I had forgotten to take my camera, but I had my smartphone with me so I took a picture of the two of them there. 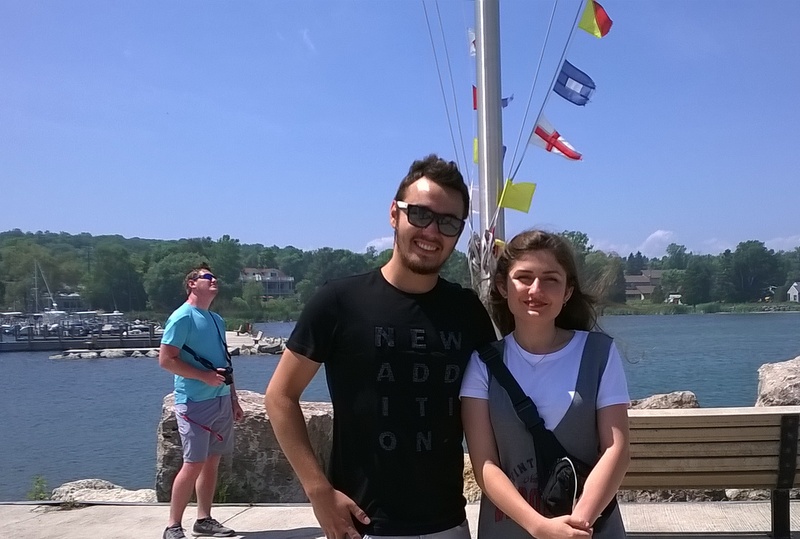 Merih and Kader at Bailey’s Harbor

She is a very sweet young woman.  She reached out to me even last night and she gives me hugs.  I asked her if she has a Bridges family and she said no, but she’d like one.  I told her I would talk with the Bridges coordinator and see if we can “adopt” her.

Merih sounds like he’s one of her biggest fans.  I asked her what she likes to do and she said she likes to draw and paint.  I stopped at the quilt store in Jacksonport where they also have art prints and she enjoyed looking through them.  We were the only people in the store, so the woman at the counter started talking with the two of them.  Merih told the woman that Kader can draw a good picture in two minutes, so the woman handed her a pen and a piece of paper.  Kader drew a male figure out of her head in two minutes or less.  The woman liked it and asked her to autograph it.

When we got back in the truck, I asked Kader when she started drawing.  She said she has liked drawing ever since she was about ten or twelve years old.  I thought she said that she took art in high school, which I did too, but Merih explained that in order to get into her high school, she had to take a talent exam that is very difficult to pass, and she got into the best art high school in Turkey.  I was impressed!  She doesn’t seem to brag on herself, but it’s obvious that Merih is proud of her.  He says they are just friends from Turkey, but it wouldn’t surprise me if they become more than friends in the not too distant future!

When we got to Sturgeon Bay, the hairdresser said it would be an hour before Merih could get in for a haircut, so he asked me if we could go across the street to McDonalds.  It turned out that he hadn’t had breakfast or lunch.  He said that on his work days, he eats at the two restaurants he works at.  I asked him what he does on his days off, and he said that Kader cooks for him.  He told me she could cook for us sometime.  I hope she knows he was volunteering her services!

After lunch, I took them to my church and told them a little about it.  Kader asked if we could go inside.  I wasn’t sure the door would be open, but it was.  They had anticipated that the church would be full of candles.  I told them that Catholic churches would have a lot of candles, but we are Quakers.  That got us into a discussion about how there are many churches but we are all Christians.  Merih said he understood because they are Sunni Muslims but there are other Muslims as well.  I told him I have heard of Sunni’s on the news and he seemed kind of surprised.

After Merih’s haircut, we went grocery shopping at Walmart.  Then we headed home on the west side of the peninsula.  As we came to each town, I announced what town we were going through.  When we got to Fish Creek, I pointed out where I work at the Noble House.  In Ephraim, I turned toward Anderson’s Pier and Kader’s eyes lit up because she has seen pictures of the boathouse there.  It’s one of our famous landmarks.

When I got them back to their place, they gave me a hug and told me they love me!  Kader thanked me profusely for taking her today.  My heart melted.  I have written to the Bridges coordinator to ask if we can keep her!