We have had more fun with our Bridges kids!  I have pictures and stories to share… 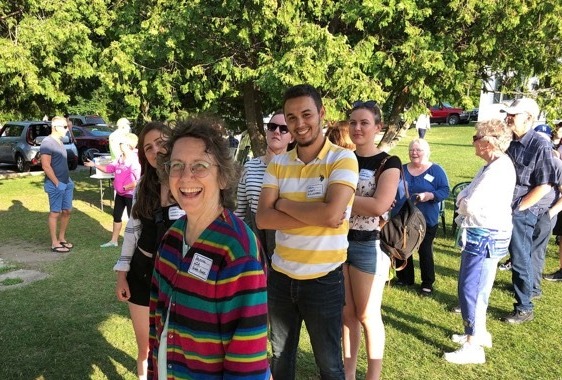 Last night there was a Bridges event in Ellison Bay. Poking her head out from behind me is Kader and behind me is Merih.

Later, all three of us went out on a kayak.  I always thought kayaks had covered tops with holes that you climb into.  These seemed more like canoes to me.  When we went out, I was in front, Kader was in the middle, and Merih was in the back.  I’ve never been in anything like this before, and by the time we went out, there were large swells in the water.  Two other kayaks turned over in the water (no harm done) and there were times when I felt we might tip over as well, but Merih taught us how to paddle to stay upright.  It was fun…looking back on it!

This afternoon, Merih was off work but Kader wasn’t going to be off work until later, so I picked Merih up and took him to Cana Island Lighthouse.  There is a tractor that pulls a cart along a causeway between Cana Island and the main shore.  Today, the water level was high enough in Lake Michigan that we had to put our feet up to try to stay dry, and even then, the waves splashed against the tractor and burst onto us.  It was all in fun though. 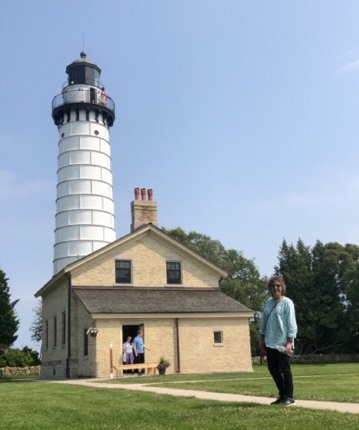 Merih took this picture of me in front of the lighthouse… 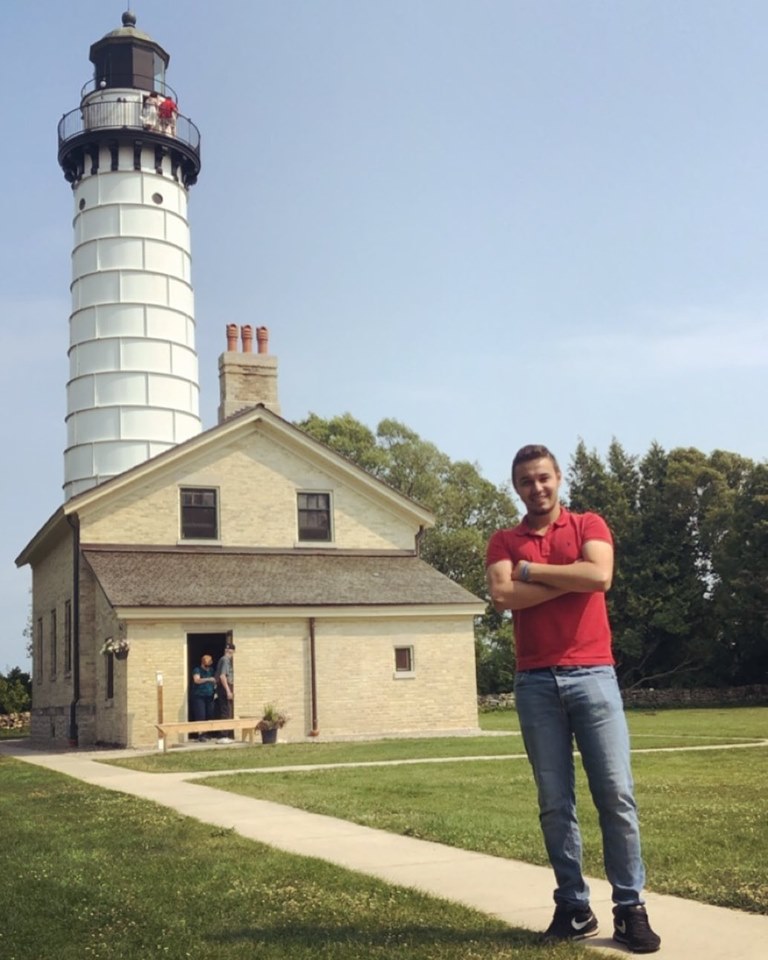 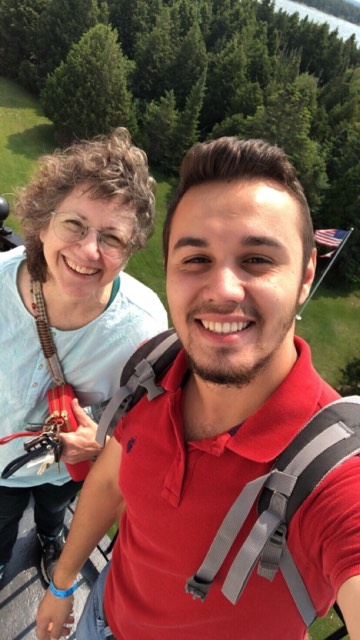 We climbed all eighty-two steps to the top of the lighthouse and Merih took this selfie of us from the deck at the top.

I had hoped he would like the lighthouse, but I didn’t dream how much he’d like it!  When we got out on the deck, it was windy.  Merih was suddenly struck with nostalgia about not having flown in a while.  In Turkey, he does paragliding.  He spread his arms and pretended he was about to fly off the deck.  Inside, we got to look at the Fresnel light, and Merih lit up (if you’ll excuse the pun!) because of his studies in electrical engineering in the university he attends in Turkey.

It was getting to be time to pick Kader up so we left.  I had planned to take Kader to an art gallery, but shortly after we picked her up, we got hit with a big thunderstorm and downpour.  I still tried to get us to the gallery, but they must have closed early due to the storm.  Maybe next time…

So I took them home with me.  Merih had been to our house briefly once before when he drove his car over for Mark to work on, but this was Kader’s first time in our home.  Mark hadn’t arrived home yet, but he and Tucson were due back soon.  While we were waiting, Kader tried to make acquaintance with Dobby and Kimba, our cats.  That didn’t go too badly, but when Mark brought Tucson in (holding tightly to her collar) she started barking and going crazy and scared Kader.  Mark got her leashed to his desk and tried to get Tucson calmed down so that Merih and Kader could get used to her and vice versa.

I made dinner.  I had picked up some shish kabobs at the store and I made rice to go with it.  Kader came in to see if there was anything she could do to help, so I had her set the table.  When the rice was done, I asked Merih to help her serve it on the plates since I had made so much that the pan was heavy.  He grabbed a small bowl and I didn’t realize what he was doing with it until I came in with the shish kabobs. 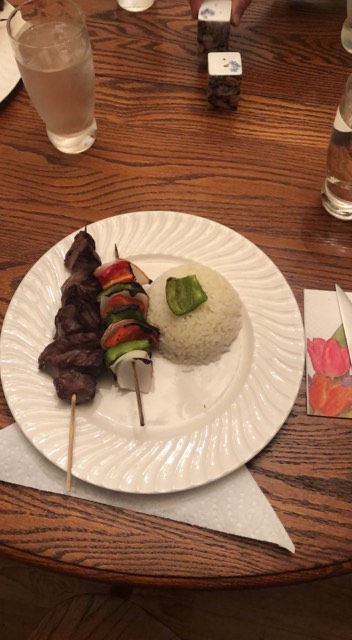 He and Kader packed the rice into the little bowl and set it upside down on each plate. Apparently, that’s how they serve it in Turkey. It felt very fancy!  Also, Kader folded the napkins fancily and made a nice place setting at each place. 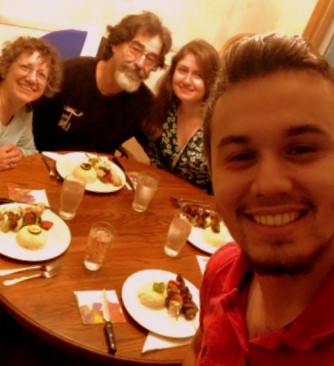 Merih took a selfie before we started eating to commemorate the occasion!

After dinner, we set up our DVD player in the living room and showed them the movie October Sky.  It’s a movie from a number of years ago about four high school boys in a coal mining town in West Virginia who were inspired by Sputnik to try building a rocket.  A bunch of their first attempts were flops, but their teacher told them that if they stuck with it, they could enter their rocket in a local science fair and then possibly go to the national science fair where, if they won first place, they could all get scholarships to get out of having to work in the coal mines.  It was based on a true story.  I thought of showing that for Merih’s sake, but Kader seemed to enjoy it too.  I wasn’t sure how much she’d understand, but she was able to follow the story through the actions if nothing else.

Then we had store-bought cheesecake for dessert.  Apparently, that’s another thing they have in Turkey.  Merih had requested it when I asked what they’d like for dessert.  After dessert, Mark took them home.  By then, the storm had passed.  It was a great day in spite of the weather!