I guess I haven’t mentioned yet that we ended up keeping Tucson.  I had gotten a call from a neighbor saying that she’d heard of someone who might be interested in meeting Tucson, so I was getting all set to get rid of her, but Mark was really depressed.  He loves her.  To his credit, he wasn’t going to stop me from giving her away after what she did to me, but he was miserable.  I finally told him if he can take her to work with him and everywhere else he goes, he can keep her.  He took the passenger seat out of his work truck to accommodate her and he has been good at taking full responsibility for her.

In anticipation of our trip to Oregon, we decided to have Tucson spayed.  It was going to need to happen sooner or later anyway, but doing it before the trip means she’ll be quieter and easier to handle on the road.

I couldn’t find any vets that had time to do it before our trip anywhere close by, but I finally found a vet who could take her today down in Luxemburg.  Luxemburg is mid-way between the bay and the lake, a little northeast of Green Bay.  That’s about an hour and a half away from us.  Her appointment was at 8:30 this morning, so Mark had to be up and ready to leave by 6:30.  I would have gone with them, but we realized there would be no room for me when she came out with a cone on her head.  Mark had a doctor’s appointment in Green Bay and several other errands to do down there while he waited for her to be ready to come home, so he took her alone.

When they finally arrived home this evening, I asked how it went.  Mark was really impressed with the vet.  He spent a little while getting to know Tucson while sitting down on the ground with her.  He could see she is high energy, so he asked Mark to stay and help when it was time to give her a shot.  Mark said she didn’t flinch a bit when the needle went in, but then the vet left the room and waited for the sleeping medication to take effect.  Mark said that Tucson kept pacing back and forth and then she started jumping at the door.  The first time, she jumped higher than the door knob.  Each successive jump after that got lower and lower, and finally the vet’s assistant came in and looked at Tucson’s eyes and said, “Oh yeah!  She’s beginning to feel the effects.”  At that time, Mark was free to go and Tucson had her surgery.  They also clipped her nails for us.  Tucson won’t let us near them.

When Mark picked her up, the vet gave him some pills for pain and also some Trazodone to keep her calm till the stitches heal.  We’re supposed to keep her calm for fourteen days.  Yay!  I know I shouldn’t be so happy about her delicate situation, but I like her much better when she’s quiet and sleepy.  Here’s a picture of her with the cone of shame on: 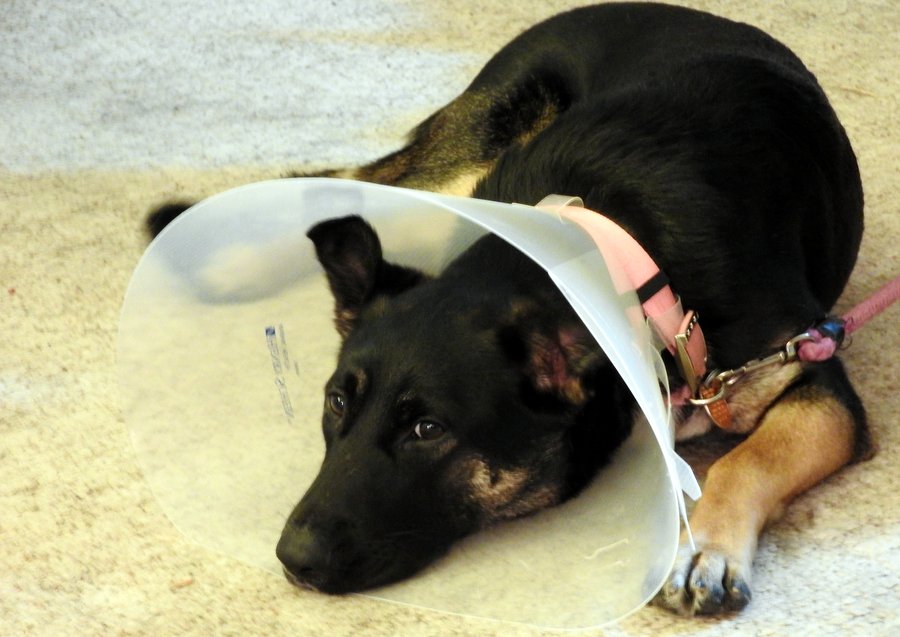 She’s not too happy about the cone!