Back before I flew out to Oregon in September, I signed up to participate in a quilt workshop put on by the Trillium Quilt Guild today.  When I thought I was going to be staying in Oregon, I canceled my registration for the workshop.  Then when Sherill died and I returned, I asked if there was still room for me and I was told yes, so I got to spend today being creative.

Once a year, the quilt guild spends a day putting together small quilts for children in need and other charitable organizations.  To prepare for the workshop, they asked us to cut six and a half inch squares of scrap fabric we had in our stashes.  We could also piece together the squares if we wanted.

Mark’s business is beginning to slow down, so he took me and helped me carry my sewing machine in, but they told me they had enough sewers so I sent the machine back with him.  I regretted that later when they could have used more sewers after all.  They had me put together squares of fabric in rows to give to the sewers to put together into quilts. 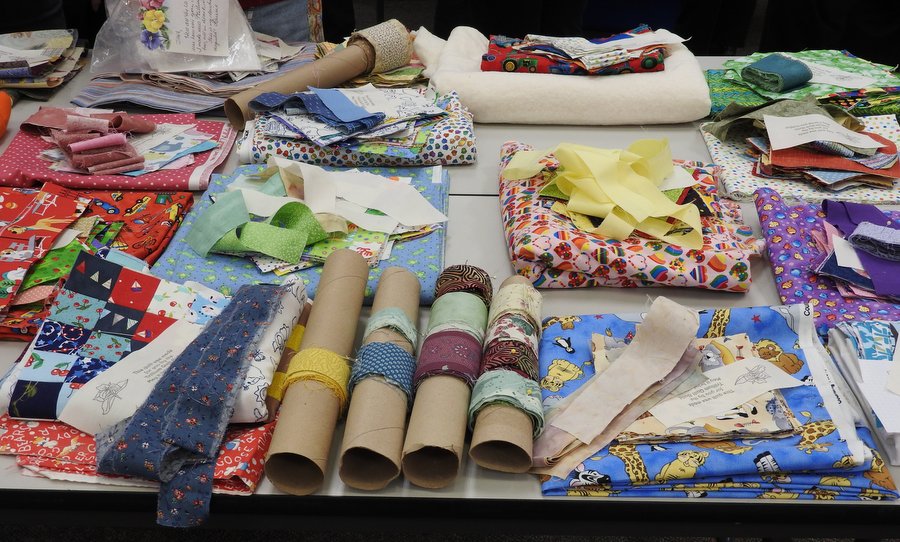 Putting together “kits” with the squares for the top, a large coordinating piece for the back, and strips for the binding

Sewing together the quilt top 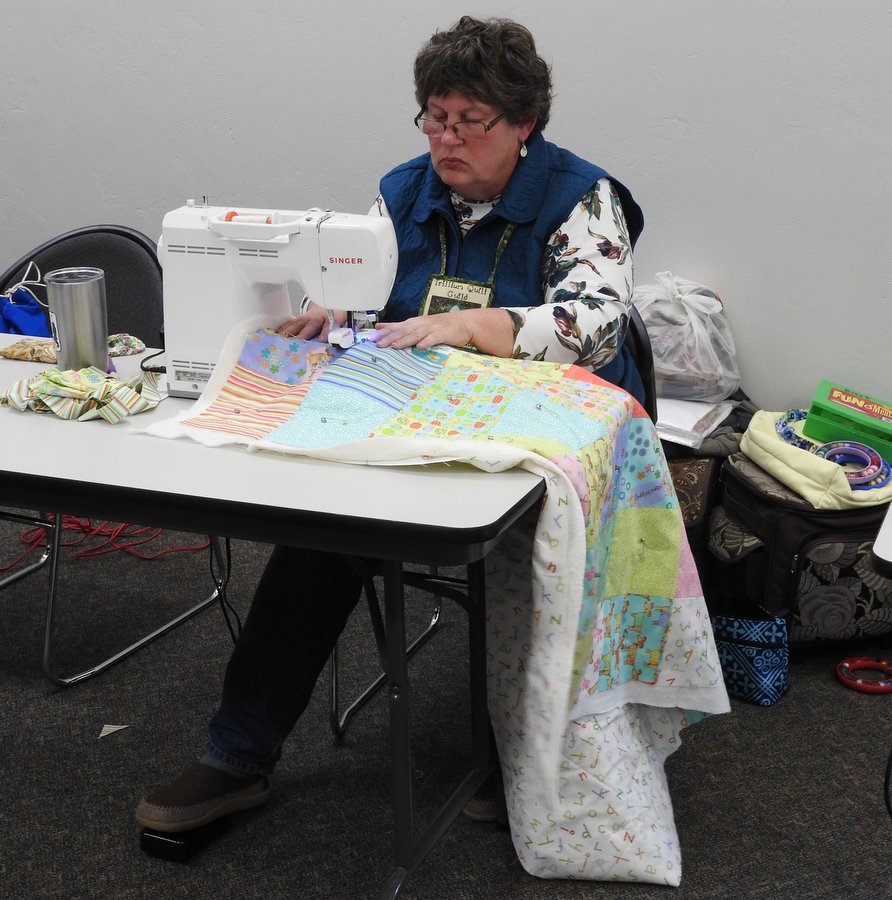 Sewing the top, the batting, and the backing together 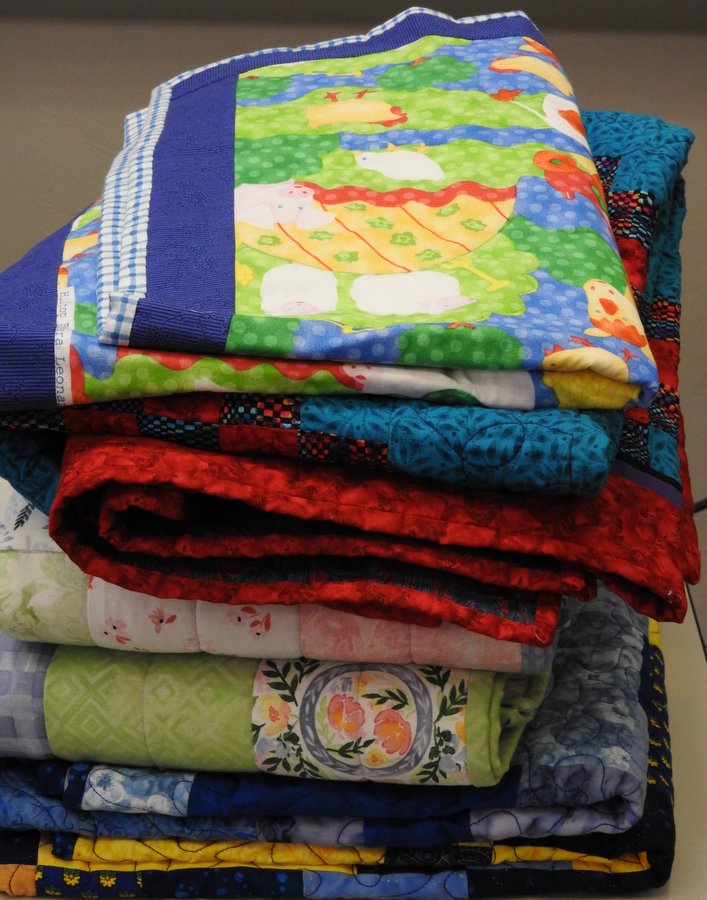 A pile of finished quilts

After working for several hours, they put out a nice lunch for us that several of the members had contributed. 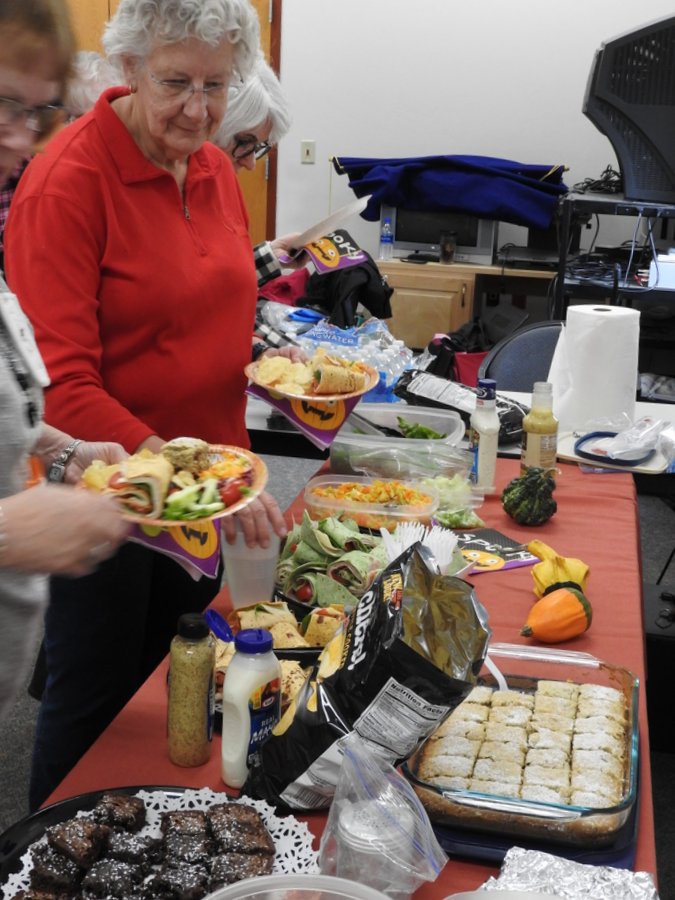 I had a little opportunity to visit with some of the women at lunch.  I have been thinking for a while about broaching the subject of whether anyone in the guild would like to form a fabric store cooperative in northern Door County, so I used this opportunity to ask those who were sitting near me.  Unfortunately, they kind of told me that fabric stores up here don’t work too well because there is no business in the winter.  Apparently, even the established fabric store in Sturgeon Bay struggles a little during the winter.  Darn!  I’ve been harboring the dream of opening a fabric store for the last couple summers, and during one lunchtime, that dream has been squelched… unless I can come up with a way to make it work during the winters or make it profitable enough during the summer to survive having the winter off.  Hmm…

Mark came to pick me back up a little after 2:00 and we went to the Town of Liberty Grove to vote.  Early voting opened a few days ago, and since we will be on our way to Oregon on election day, we did our civic duty today.  Mark is Republican and I am Democrat, so we always cancel each other out, but we both vote so that the other doesn’t vote alone and tip the scales their way!  😉  I like these little elections, but I dread presidential elections because we always seem to get into fights then.  I’m glad those only come around once every four years.