Mark’s last day at work was last Saturday and mine was today.  Mark has been doing things to the RV to prepare for our trip to the frozen north.  He resealed the roof, patched leaks, caulked, put our new (to us) topper over the bedroom slide out, and began packing things back into the basement of the RV.

I have been doing things like clearing off the floors and counter tops in an effort to clear the way for bringing the slide outs in and to secure things so they won’t be falling all over the place when our house on wheels moves.

When I got home from work, Mark was ready to load his motorcycle into the back of our pickup truck.  He sets ramps up on the tailgate and puts straps on his bike.  He has a winch secured near the cab of the truck and I handle the controls to it.  He grabs the hook and walks backward as I extend the cables.  When he gets down to the motorcycle, he hooks the cable onto the straps and I push the button that pulls the cable back up as Mark walks the bike up the ramp and into the bed of the truck. 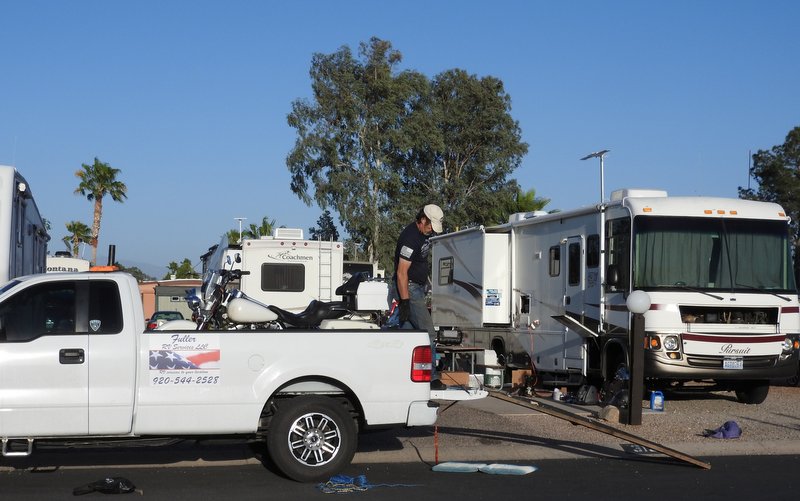 The bike is in and Mark is coming back down.

Mark strapping the bike securely down.

I think Tucson suspects something is up!

We just got word from our friend, Judy, that our former bosses, Kathy and Tim, aren’t going to open Wagon Trail Campground until May 11th.  They had planned to open on the 4th, but the weather isn’t permitting.  Since campgrounds are opening late, Mark won’t be able to start his business till mid-May.  If I didn’t have a job interview scheduled in Ephraim for the 24th of April, I’d vote for staying in Tucson a little longer to enjoy the warmth.

Judy also told me that the IRS has decided to extend tax season one more day because their computers went down for several hours today.  I’m sorry, but I have approved my time card for the last pay period and I’m not going back to work tomorrow!

Speaking of tax season, I heard something else I didn’t know at the office today.  Have you been wondering, as I have, why the end of tax season hasn’t been on the 15th for the last couple years?  Apparently it’s due to a renewed holiday in Washington DC.  You see, Abraham Lincoln signed the District of Columbia Compensated Emancipation Act on April 16, 1862.  This act compensated slave owners in the District of Columbia for the release of over 3,000 slaves nine months before Lincoln issued the broader Emancipation Proclamation.  It was celebrated from 1866 to 1901 and then was forgotten until a woman named Loretta Carter-Hanes rediscovered it as she was doing some research.  In January 2005, the mayor of Washington DC signed this day into an official public holiday in town.  This affects tax day because the federal government (including IRS) observes the day, so the tax deadline is pushed back for everyone.  When Emancipation Day falls on the weekend, it is celebrated on the following Monday.  This year, the 16th was on Monday so that pushed tax day to the 17th.  Next year, tax day will be back where it belongs…on the 15th!