Two or three weeks ago, Mark was working at a campground and he pulled into an empty lot across the street from the campground to let Tucson do her business.  She started wandering out into the desert and he followed her.  Something caught his eye so he walked over to see what it was and found a recumbent tricycle in pretty good condition lying out there.  It needed some repairs to the seat covers, both the seat and the seat back, but other than that, it was usable.  He brought it home and we fixed it up.  Ever since then, he’s been wanting to go on a bike ride with me.Today was cool, but there was 0% chance of rain and the sun was shining, so we rode from the church down to the Rillito (pronounced Ree-EE-toe) River.  There is a park at the river that consists of a long trail that follows the river on both sides.  I have to say here that most of the time, the river has no water in it, but we’ve had some rain recently, so there was a rushing river down there. 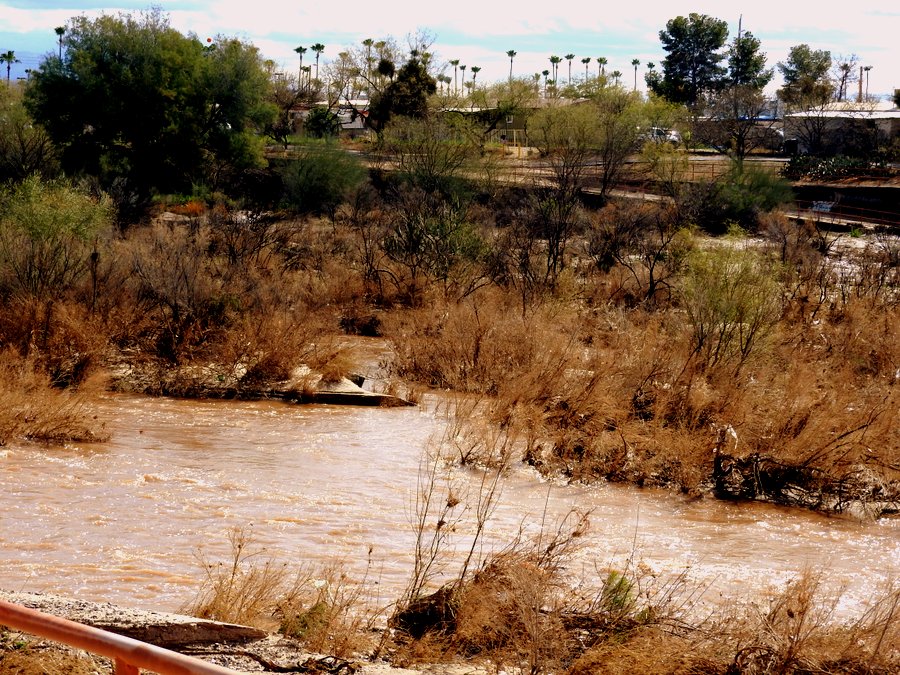 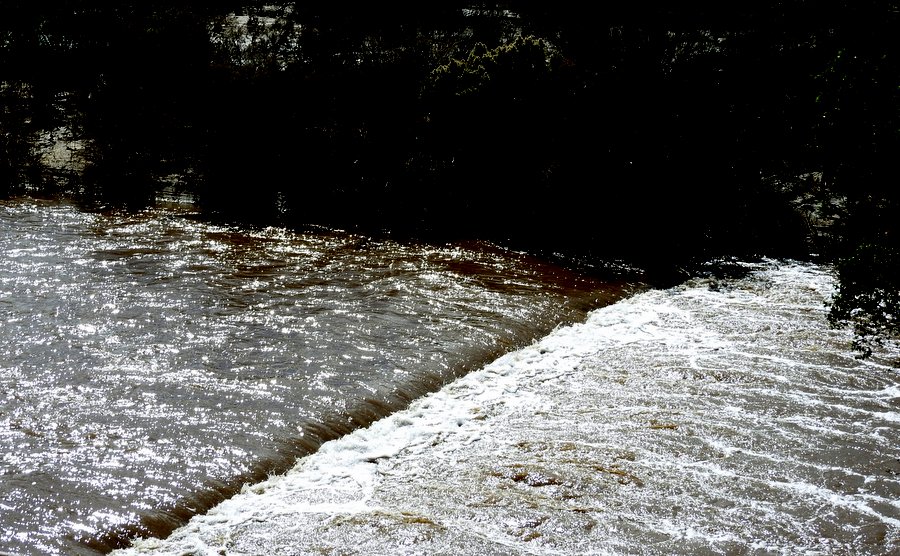 This is where we could really see it rushing.

The road that I bike along to get to work runs north and south.  This trail runs east and west.  The trail goes under the major streets.  We entered on La Cañada and then rode under Oracle, Stone, and 1st. 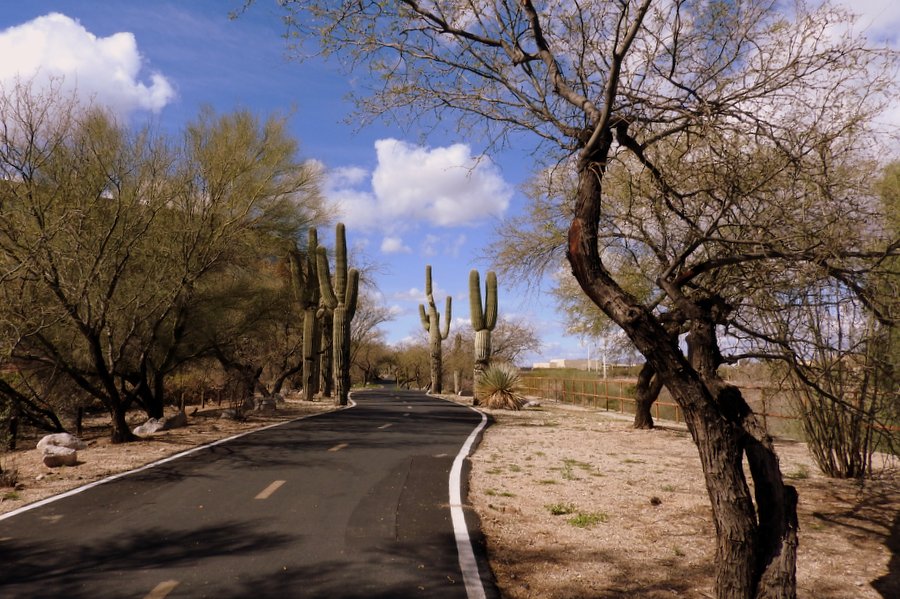 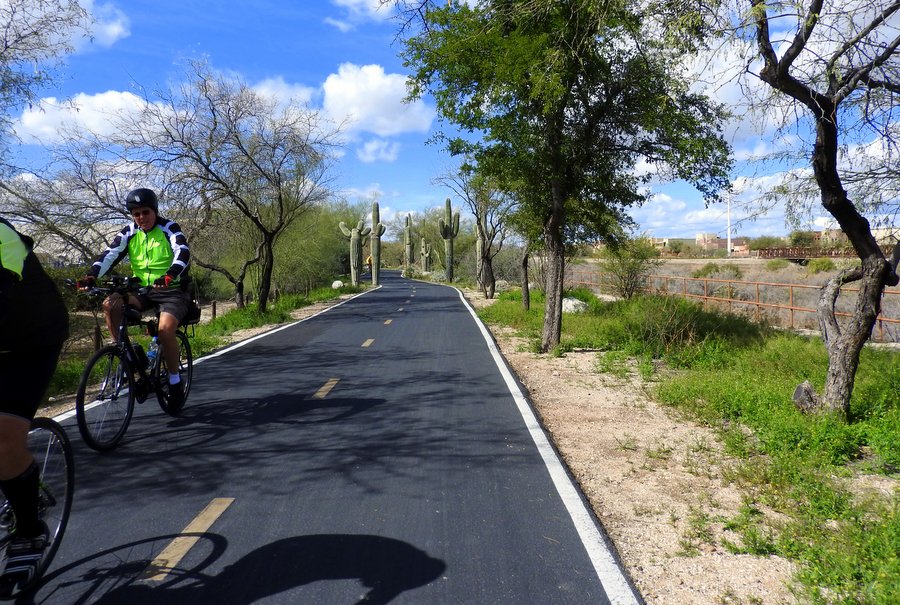 A lot of people bike this trail or walk along it. 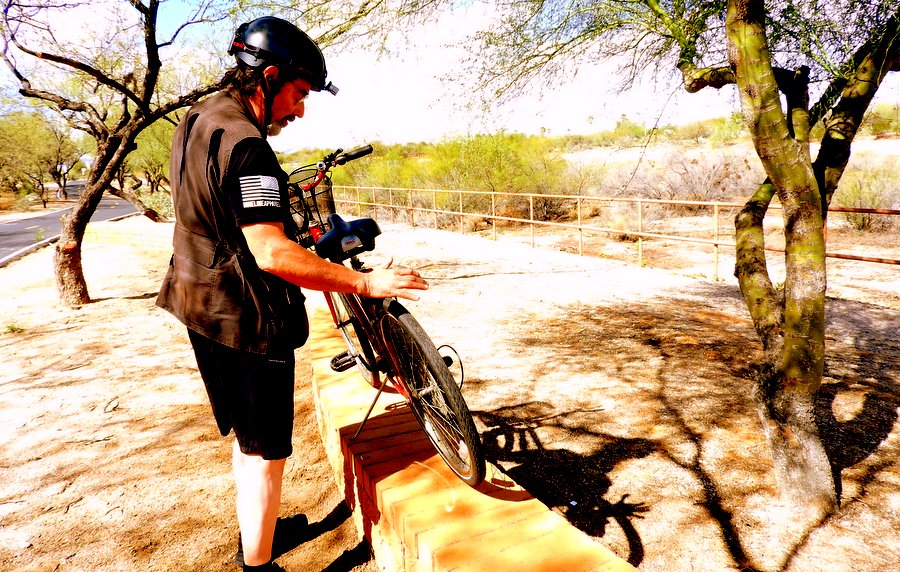 Mark was trying to help me with my gears.

Every time we went under an overpass, we also had to come up.  I was beginning to wear out, so at one point, Mark stopped to try to help me figure out how the gears on my bike work.  I grew up with bicycles that didn’t have any gears, so I still get confused as to how to use them.  Once he showed me how to operate the gears, uphill didn’t seem quite as hard, although I wouldn’t say it was particularly easy either.

When we made it back to the church, Mark checked the odometer on his tricycle.  We had gone over eight miles!  My ride to work is only 3.6 miles, so theoretically, I should be able to ride there and back more easily than the ride we took today.  I will admit, however, that I am a little sore after today.  Because of peak season, I haven’t been able to ride my bike to work.  We are going back to regular hours this coming week, and my hours will be more on the scale of part time work, so hopefully I can get back to riding my bike more often.

1 thought on “Biking along the Rillito River”