The one thing my father has most wanted Mark and I to see before we leave Tucson (the town, not the dog) is the Arizona Sonora Desert Museum.  You may recall we set out to go once before and we got side-tracked by Old Tucson.  We realized that it was now or never, so we went this afternoon in honor of Dad.

It was somewhere around 90° this afternoon, so we armed ourselves with wide-brimmed hats, sunscreen, and bottles of water.  I had meant to take my camera, but somehow I managed to leave it at home, so I ended up using Mark’s phone to take pictures. 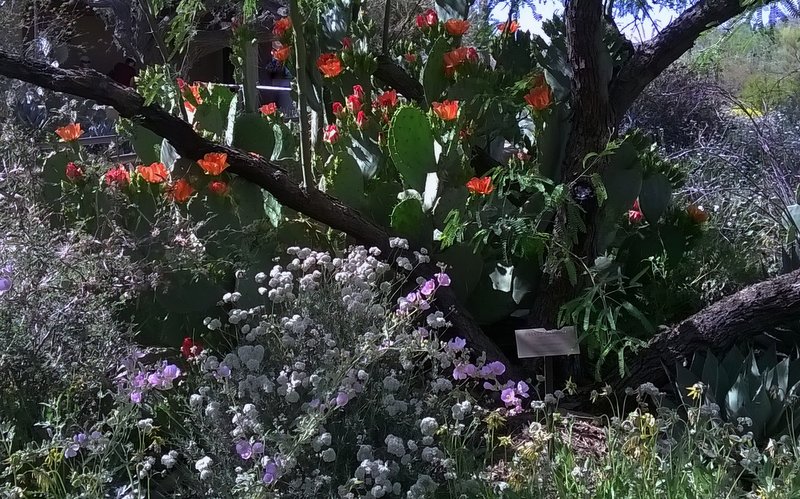 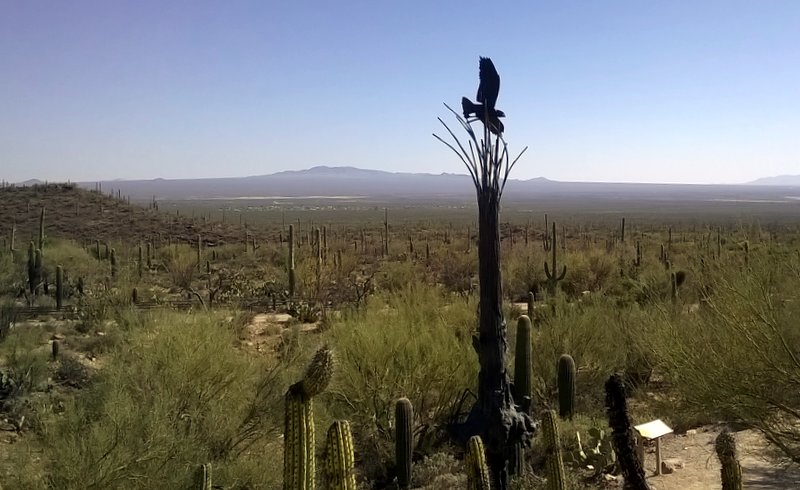 An aviary statue with a view 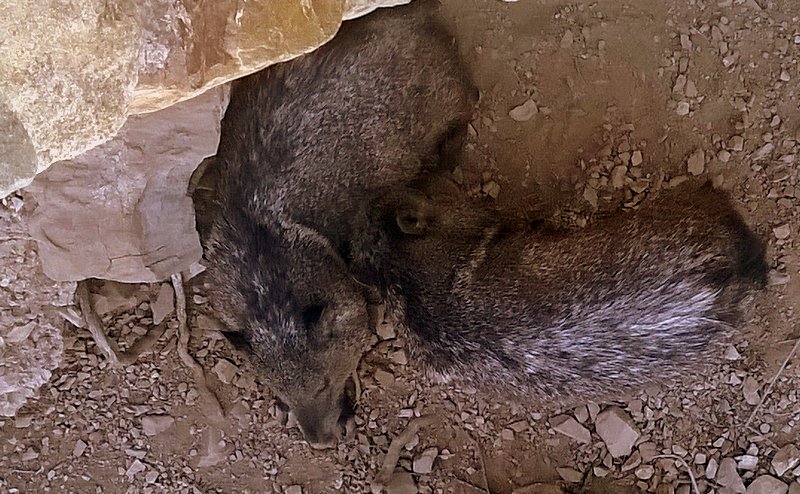 Around work I’ve been hearing folks talk about javelinas as though they are pests who get into people’s garbage cans.  My only familiarity with them before was a children’s book, written by a Tucson author, called The Three Little Javelinas, a takeoff on The Three Little Pigs.  This was my first experience of seeing them in person.  From this angle, they don’t seem so bad! 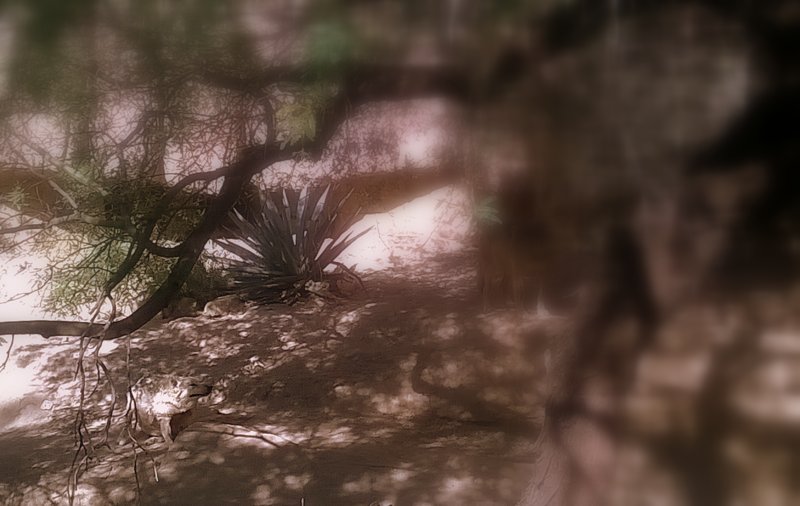 Focus on a coyote 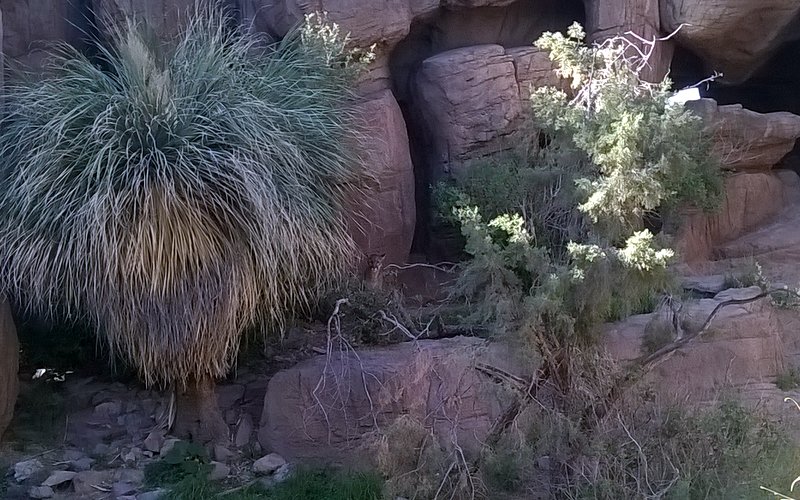 Can you spot the mountain lion? 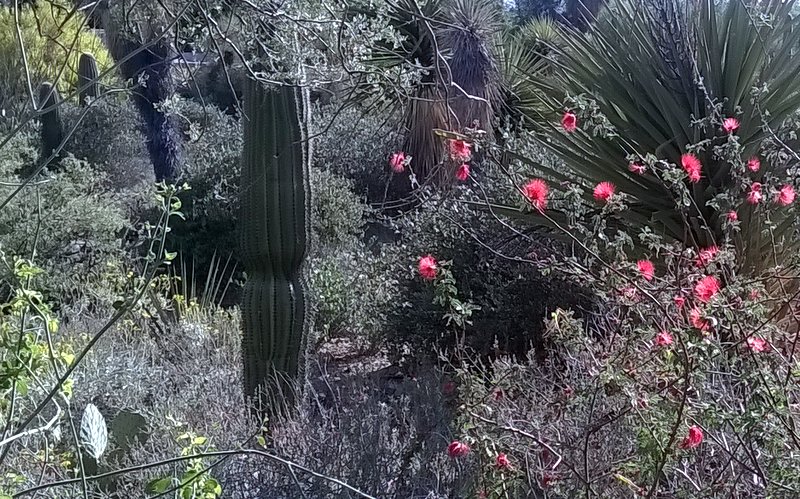 A touch of color

I had picked up a map of the trails when we first entered the museum, but we somehow made a wrong turn and ended up in the opposite direction of where I wanted to be.  I had wanted to see the walkin aviary and the hummingbird aviary, but by the time we finally found our way there, they were closed.  It’s just another thing we will have to come back to next winter.

Speaking of my father, I had a long talk with him yesterday after he had finished physical therapy.  They are trying to build up his strength by having him push around a two-wheeled walker.  In the couple months since he started experiencing pain in his right leg — the problem that led to him falling and breaking his arm — his leg muscles have become very weak.  He leaned heavily on the walker with his arms, and they were what was giving him the most trouble after his therapy session.  His physical therapist is measuring the distance and speed he’s able to go each time he has therapy, and she’s trying to push him a little farther each time.  Ultimately, his ability to walk securely will determine when he is able to go home, a goal he cherishes.

It’s hard to think of him having to relearn how to walk.  My son and I were talking about it this afternoon and he said that Dad used to be able to walk four miles per hour.  I don’t know that I’d ever heard a figure before, but I do know that Dad used to leave me panting when I tried to keep up with him.  He was still walking a mile a day until all of this started.  He’ll be 90 in June.  Please continue to hold him in your prayers.

One last note, we heard from a number of our friends in Door County yesterday that they are in a snow storm that is supposed to dump eighteen to thirty inches of snow by tomorrow morning.  I called our neighbors across the street from our house, and they said we have had snow in our yard ever since December.  Snow plows have kept the roads clear, but they’ve also left a pile of snow at the end of our driveway, and our neighbors said there is a deep snowdrift in front of our door.  They said they will see if they can get one of the neighbors to plow our driveway and they’ll try to shovel our doorstep before we come home.  It’s great to have good neighbors!  I tell you though, it’s going to be quite a shock to go from 90° weather to freezing within a week.  Still, we have to get back regardless.  It will be interesting to see what Tucson (the dog, not the town) thinks of snow!