Tomorrow night I’ll be flying back to Chicago and Tuesday Mark will be taking me back to Wisconsin.  I’ve been so busy with family I haven’t written much, but now I have a few minutes to reflect on this trip.

I spent the first couple nights with my older sister, Sherill.  I already wrote about the graveside service for my stepfather.  After the service I was able to spend an afternoon with my son and daughter-in-law.  We went for a hike.  I was so glad to get to spend time with them, and they also taught me about the newest rage — Pokemon Go.  Apparently you can get an app on your smartphone where you can walk around and find fictional places in the real world.  I have heard negative things about the game because folks playing it sometimes get hurt due to not paying attention to their surroundings.  However, my son explained that there’s a positive side to it too.  It gets all the geeks outdoors and walking instead of sitting in front of a computer all day.  Good to know!

I went to stay with my mom for several days last week.  My stepfather was a serious collector.  He brought all sorts of stuff home and hung onto it.  He had sixty bottles of laundry detergent in the garage.  Mom is set for toilet paper and paper towels for life.  There were packages of Depends, boxes of Utah coffee books, cheap jewelry… So many things that it took two dumpsters to get rid of most of it and Mom may need another dumpster before all is said and done.  She has donated three hundred pounds of stuff to charity and given stuff to family and friends.  I helped her go through stuff and move shelving around to make room for her car in the garage.  There is still much to do, but Mom said she thought it would take a year to clean out the garage and she’s feeling good about how much my sister’s family and I helped her accomplish.

We went over to the home of Cal’s son, Steve, and his wife, Nancy, took the photos I gave her and put them into a slide presentation with some of the family pictures on top.  It was used during the time folks were coming in to the sanctuary for his memorial service.

Tuesday of this week, I got to take my son to the office of The Bible Project (http://jointhebibleproject.com).  I told them it was like going to Universal Studios or meeting a couple stars!  Tim Mackie and Jon Collins gave us a tour of their new office and talked with us for a while in their busy day.  Then they gave us some cool give-aways. 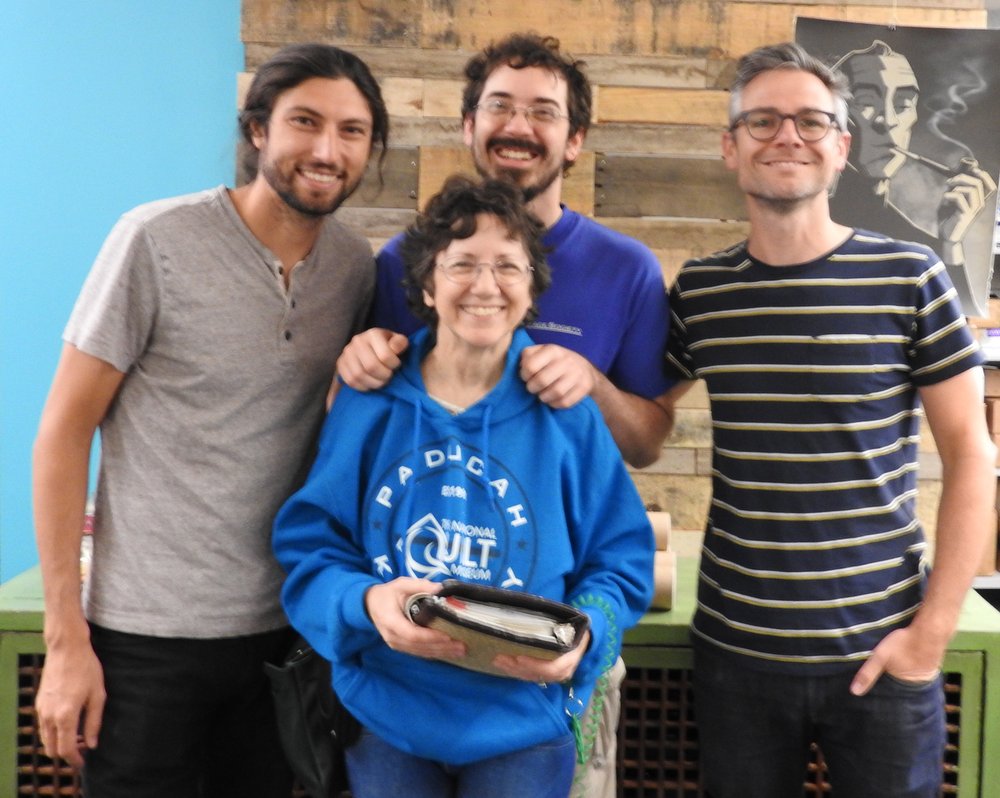 Jon Collins, Jamey Sharp (behind me), and Tim Mackie at the office of The Bible Project.

After the tour my dad took me downtown Portland to catch the Bolt Bus up to Bellingham, WA. 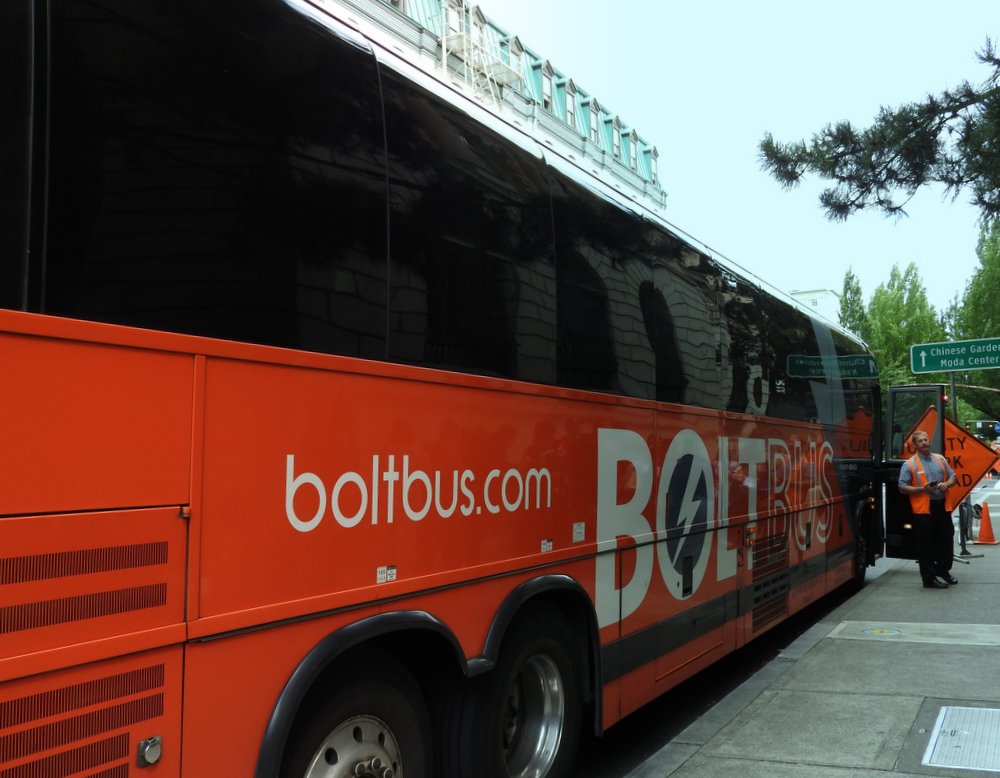 The Bolt Bus is an inexpensive bus line that goes on the west coast and on the east coast. It only cost me about $30 each way to go between Portland and Bellingham. 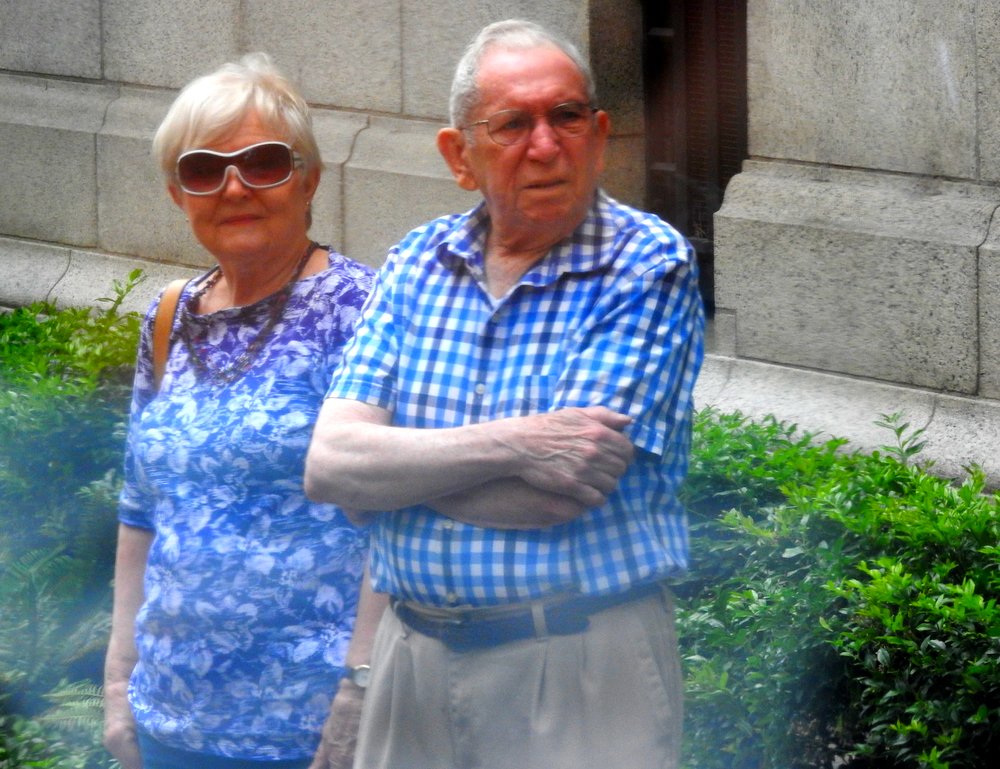 Dad and his wife, Elaine, after putting me on the bus.

My cousin, Bob Brim, picked me up in Bellingham and took me to stay for a couple nights with my Aunt Marg. 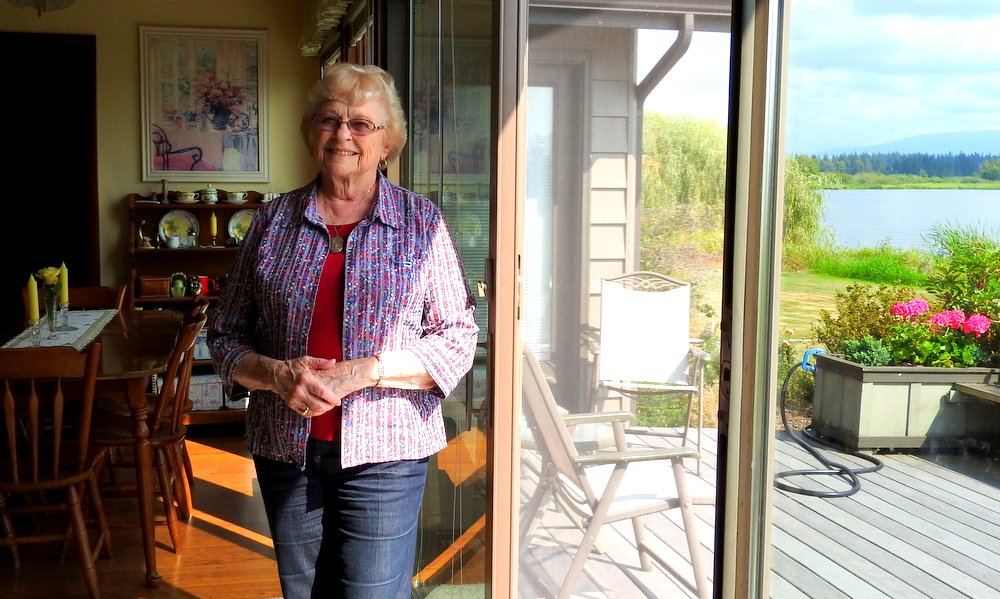 I had a couple pieces of business to conduct in Lynden.  Bob is setting up a mail forwarding business in Washington and I’m supposed to be one of his testers, but I have been having difficulty connecting to his app.  I have bought two different smartphones in the last six months, but since I’m not very techie, I haven’t been able to make it work.  Turns out I had the wrong kind of phone, so Bob gave me an I-Phone.  First time I’ve ever owned anything by Apple!

Besides the business part of my trip, I had a great time with my aunt.  She took me to where she volunteers at International Christian Response (ICR) and I discovered they already knew of me.  Seems they talked a lot about the quilt I made and sold to raise money for their ministry to persecuted Christians around the world.  Aunt Marg and I also got to play five games of Banana Scrabble!

I came back to Portland on Thursday and found that a problem I had hoped would be fixed while I was gone wasn’t fixed.  Mom’s toilet was running continuously, so we spent a day going back and forth to a plumbing store.  It took two tries to get the right sized flap for the toilet, but that didn’t completely solve the problem.  So the third time we went back I got the inner works for the toilet.  I asked the guy at the store how to install it and he showed me.  There were also instructions with pictures in the package.  It’s the first time I have ever worked on toilet plumbing, but I was praying and between God and me, we got the water to stop running.  It’s not perfect.  Mom has to hold the flush handle down until the toilet completely flushes, but at least she isn’t losing money down the drain!

Yesterday was Cal’s memorial service.  Mom and I got there early with all sorts of photos and things she wanted to set up.  The rest of the family arrived at 2:00 and we assembled in the church library while everyone else was getting seated in the sanctuary and the slide presentation was playing. 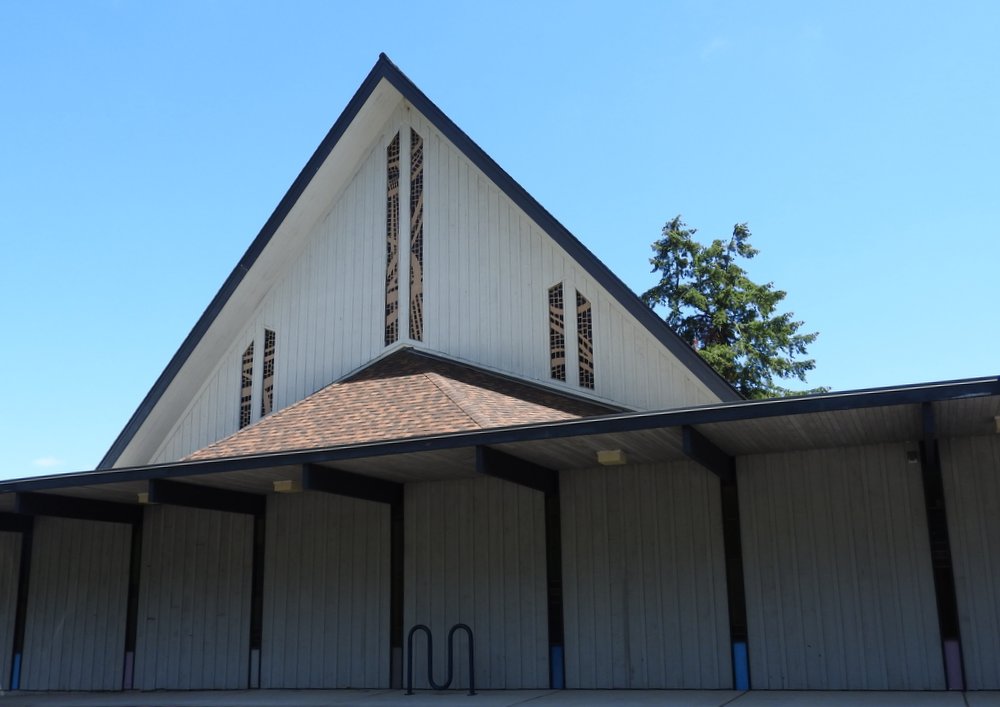 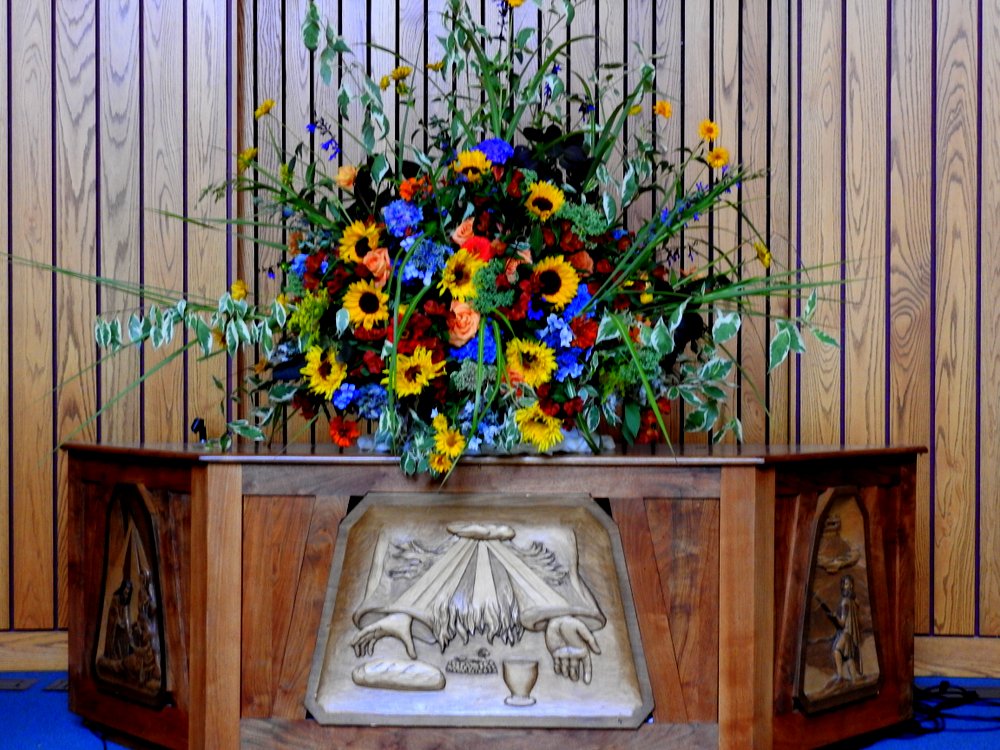 A huge bouquet a couple women in the church made and set on the altar. 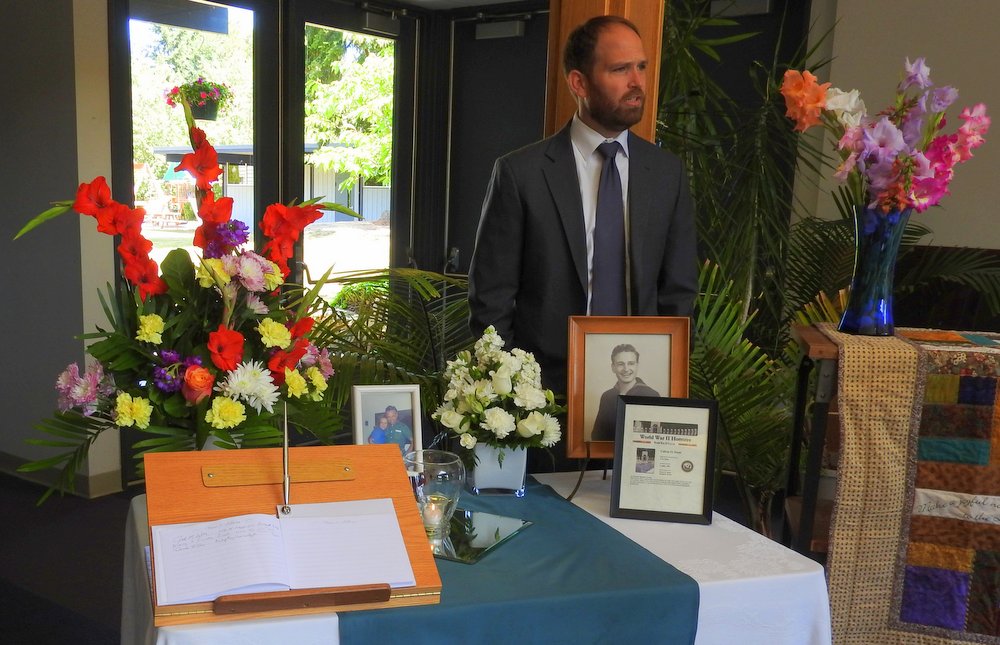 The guest book and one of the officiating pastors, Mark Mathis. 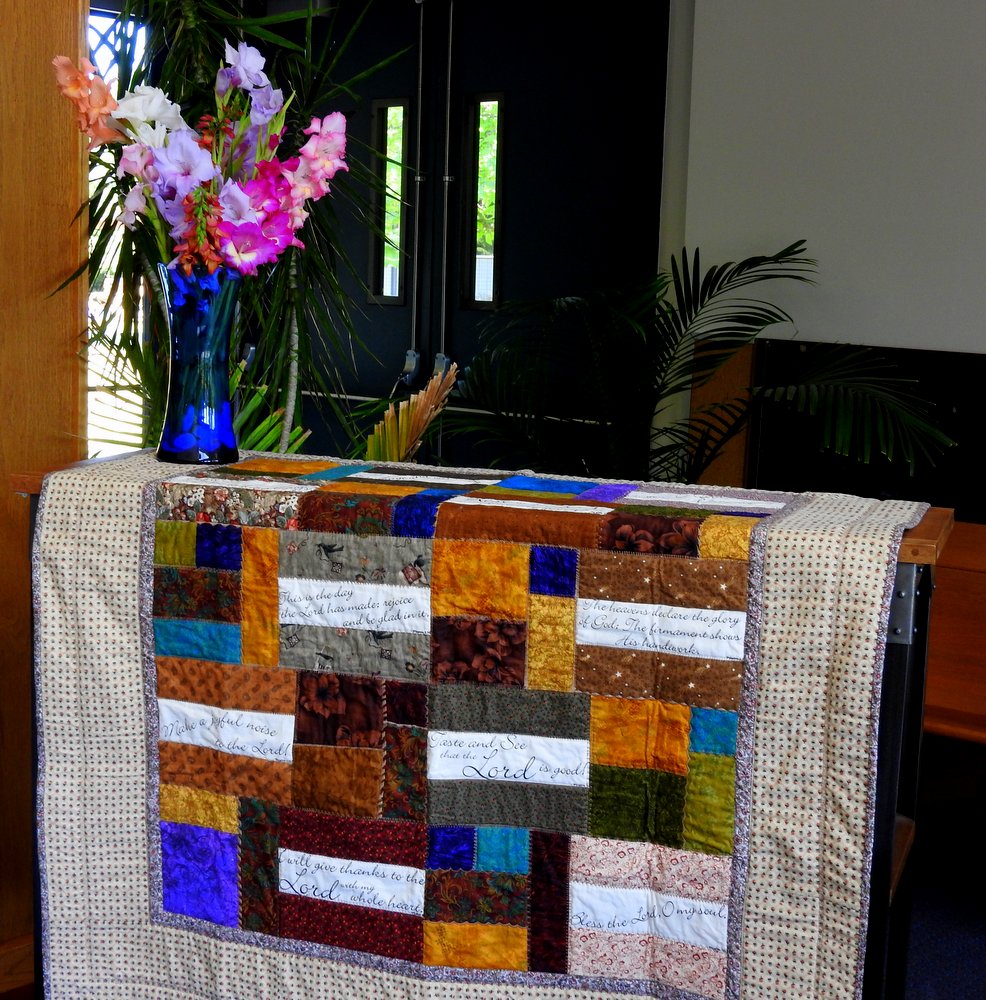 Mom displayed the quilt I had made for my stepfather as a way of making amends to him for a lifetime of resenting him.  I’m so glad I made peace with him before he died! 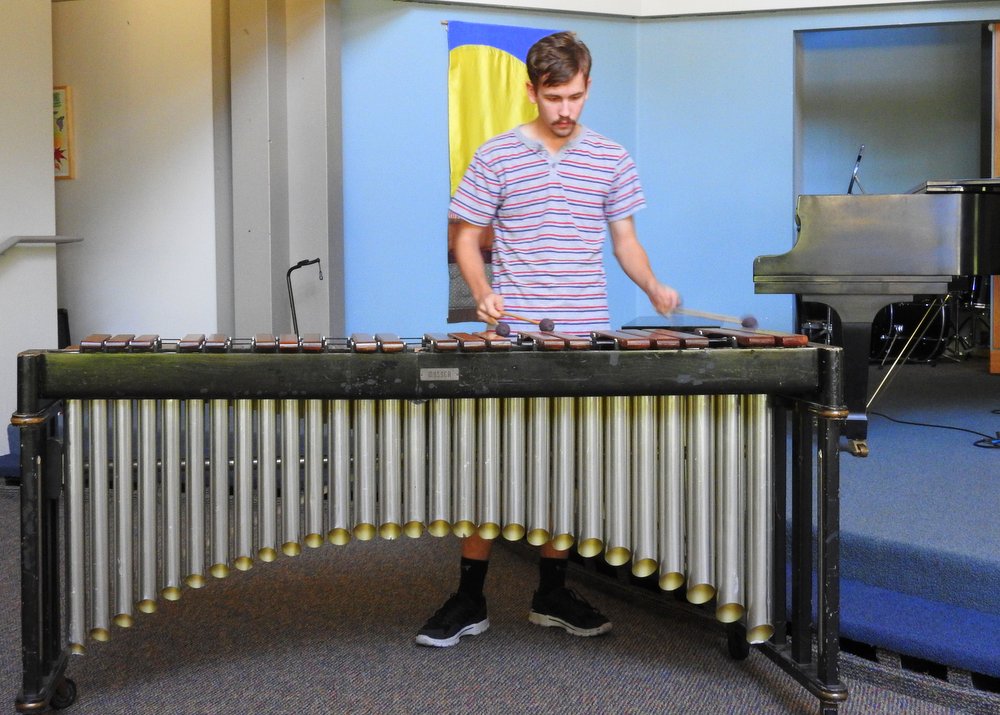 My nephew, Nathanael McCroskey-Izzett, played the marimba. He played the navy hymn, “Eternal Father, Strong to Save” and Cal’s favorite hymn, “It is Well With My Soul”.

My stepbrother, Steve, read Cal’s life story, and an old friend of the family, Dennis Plies, talked about how much Cal’s friendship had meant to him.  Both men cried.  Cal’s granddaughter, Stephanie, sang and she also cried.  Cal will be missed.  There was a reception afterward.  People had a chance to talk with family and friends we hadn’t seen in years.  It was good!

This morning I wanted to go to Door of Hope church, the church that Tim Mackie from The Bible Project teaches at.  I was very impressed! 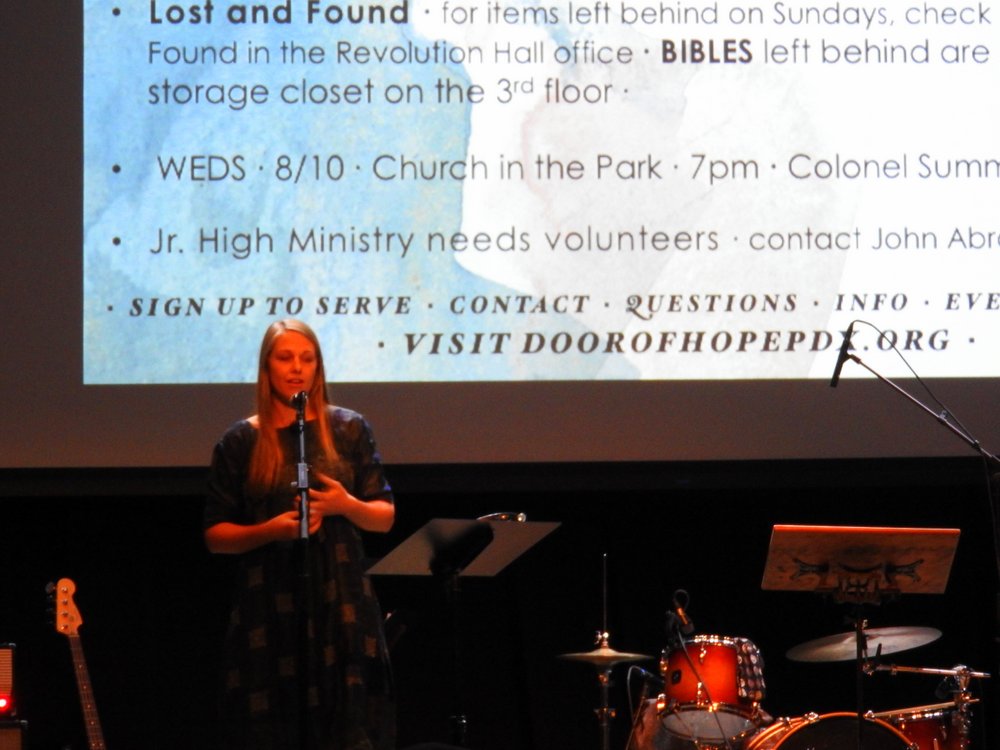 A young missionary shared about what God is doing in Kathmandu, Nepal through the work she’s doing there. 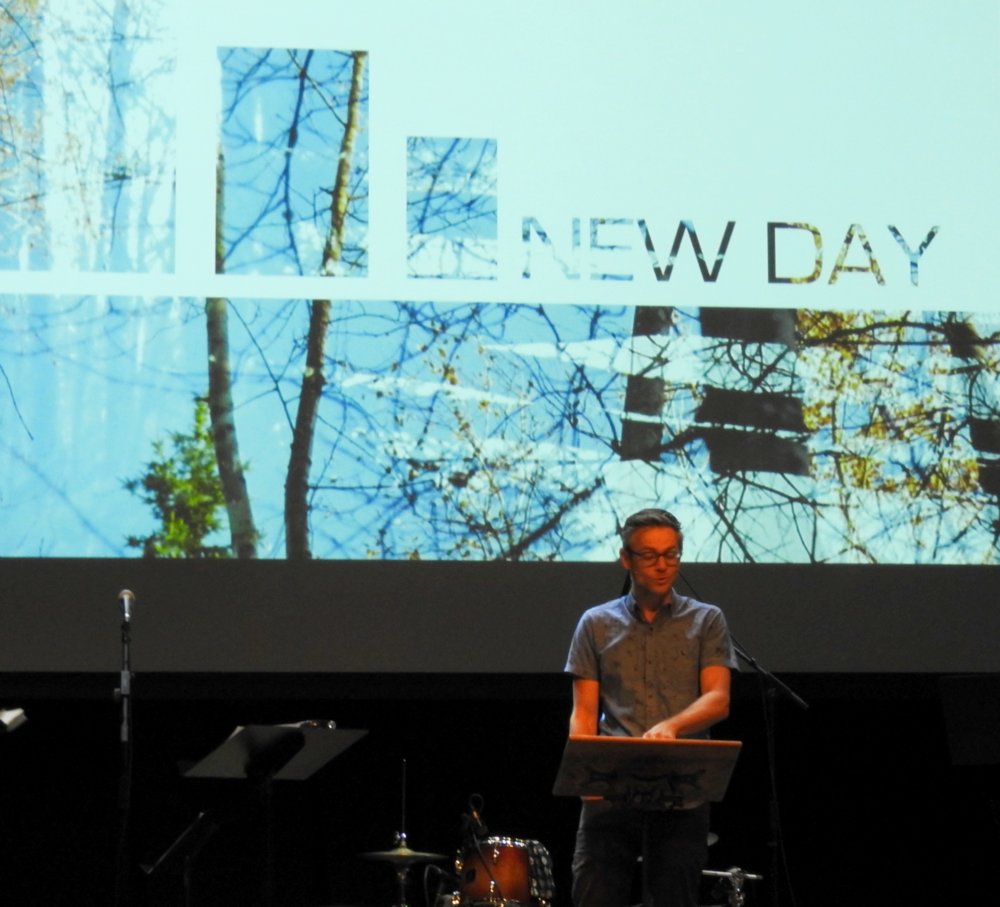 After the service they held a meeting for people who wanted to know a bit more about Door of Hope.  I went to it.  About five staff members were there as well as those of us who were new and had questions.  I learned that everything they do is centered on Jesus, that in spite of the fact that they have somewhere around two thousand regular attenders, there are lots of ways to plug into the community, and that their call is to minister to the city of Portland.  I enjoyed their music and learned that they have fifty musicians who rotate and don’t even work with the same band members every time their turn is up.  I liked everything about the church at first glance and plan to go back there when I come back to this area.

This evening my younger sister and her family, my dad and Elaine and I all went out to Sweet Tomatoes (a salad buffet) for dinner.  We had a wonderful visit and stayed in the restaurant for a long time.

Tomorrow I’ll be spending the day with Dad and Elaine and then Dad will take me to the airport around 10:00 pm.  I have a Red Eye flight.  (Ugh!)  Mark will be spending the night in Chicago so that he can pick me up early, EARLY in the morning.  (I didn’t even know there was such a thing as 6:15 am!)  For those of you at Wagon Trail Campground, I’ll be home soon.  I’ve had a wonderful visit with family and taking care of things here, but I’m ready to settle back into my usual routine.  See you soon!