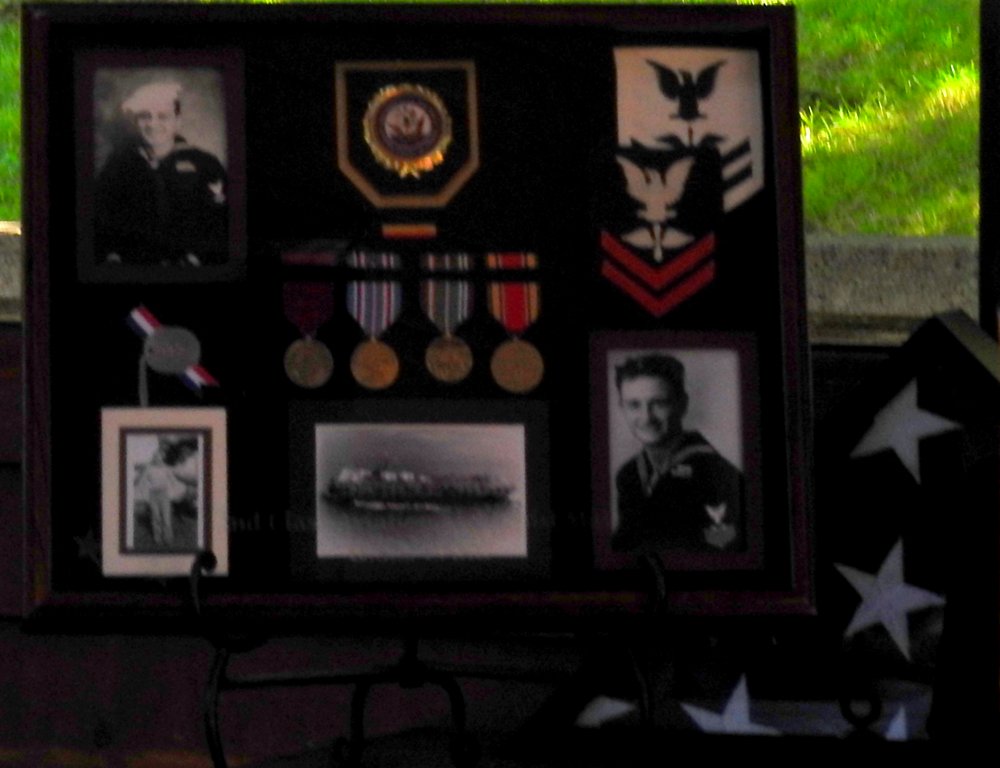 Wednesday, July 27th, was the graveside service for my stepfather, Cal.  Because he was a WWII veteran he is buried in Willamette National Cemetery, a military cemetery.

Cal had been cremated, so when we first arrived at the cemetery Mom went to the office and gave them his urn.  They gave us a map and told everyone in our party to pull into a particular road in the cemetery and they led us to a shelter and had the cars park on both sides of the narrow road, blocking it off for anyone else who might want to go through.  We had half an hour to pay our respects to Cal before the next group would need to use this shelter. 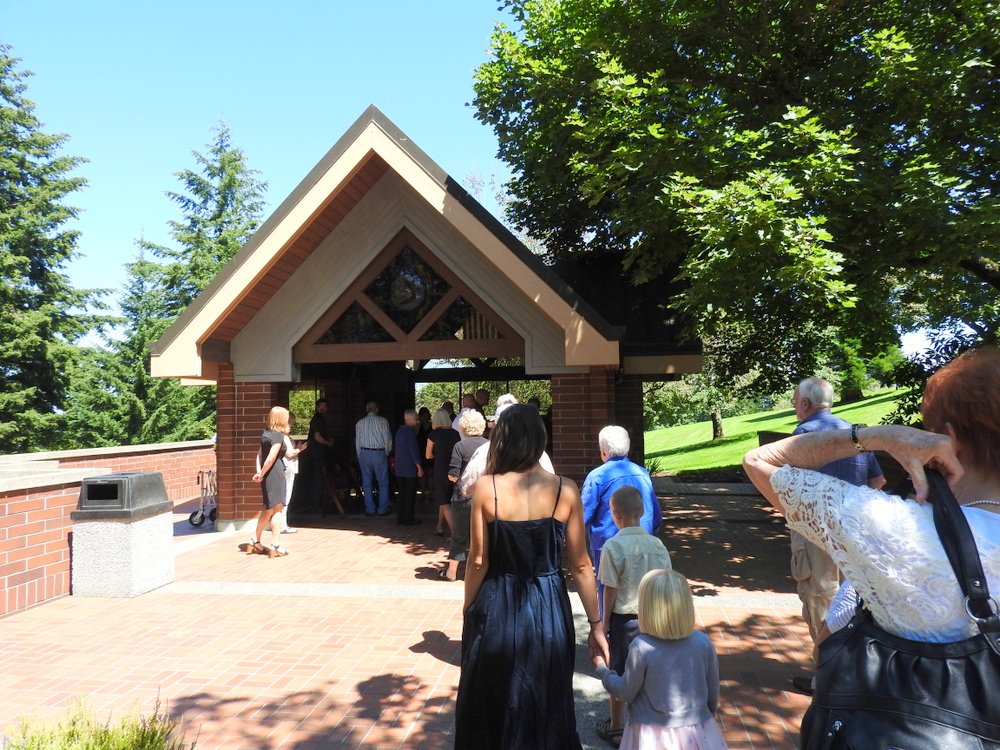 Everyone walking into the shelter 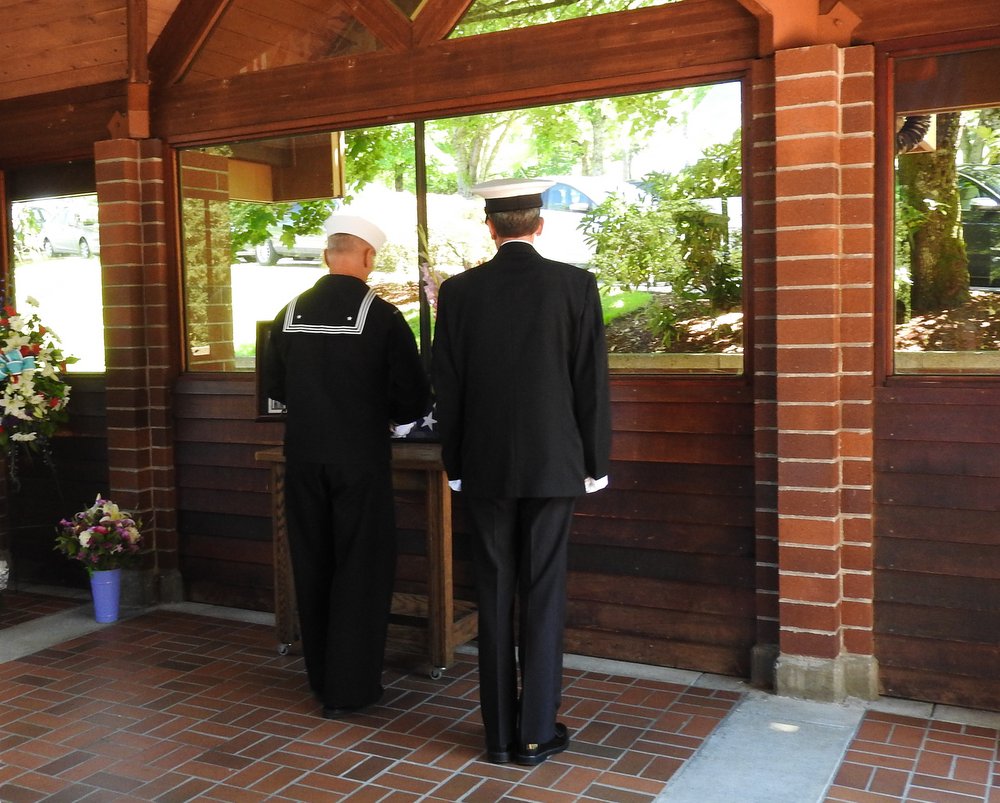 Two men (Marines? Navy?) had wrapped the box with Cal’s remains in a black linen wrap. They placed it, with great respect, on a table in the front. 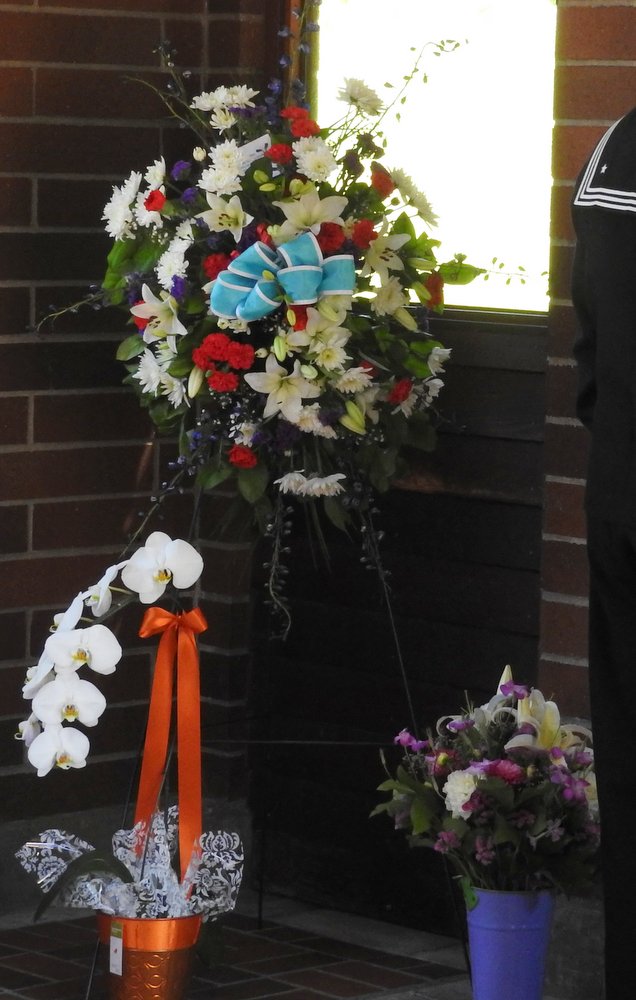 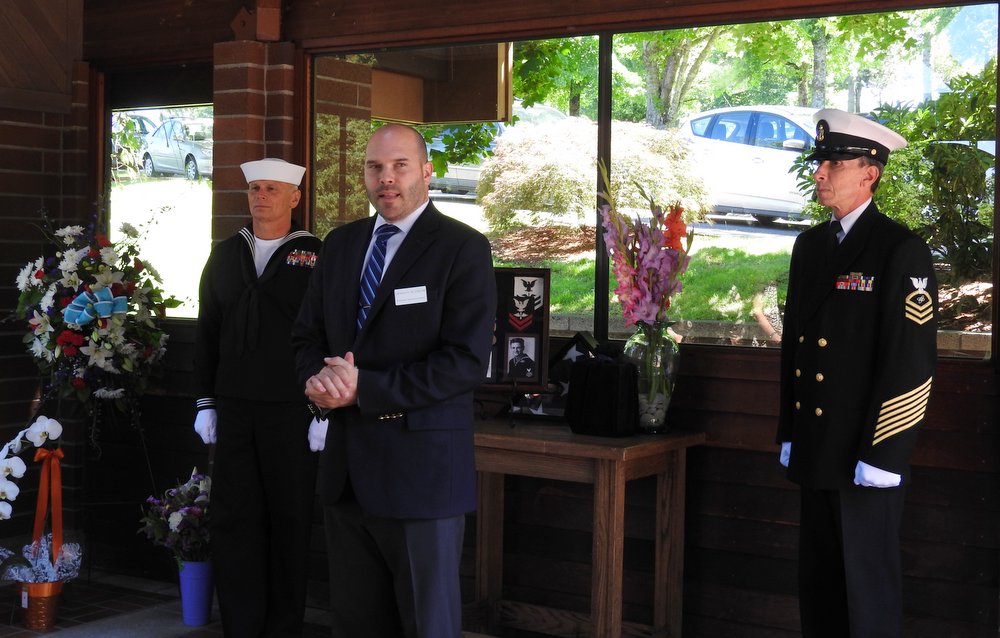 The funeral director addressed us and expressed his sympathy. Then he told us the order of service and requested that when it was over we leave in a timely manner. 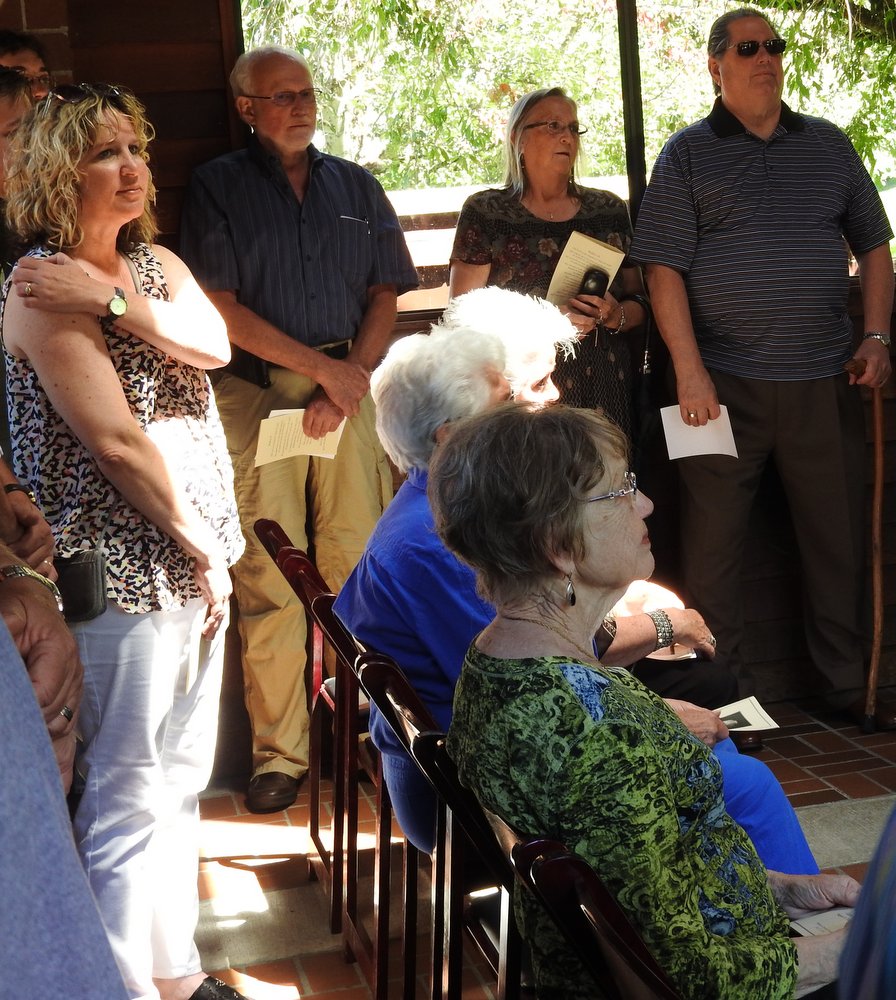 Mom is seated in the green. My younger sister, Lauryn is standing behind her in the light.

The sweetest thing happened.  There was an empty seat beside my mother and my stepbrother, Steve Stout, sat down next to her and put his arm around her through the service.  He was grateful to her for taking such good care of his dad. 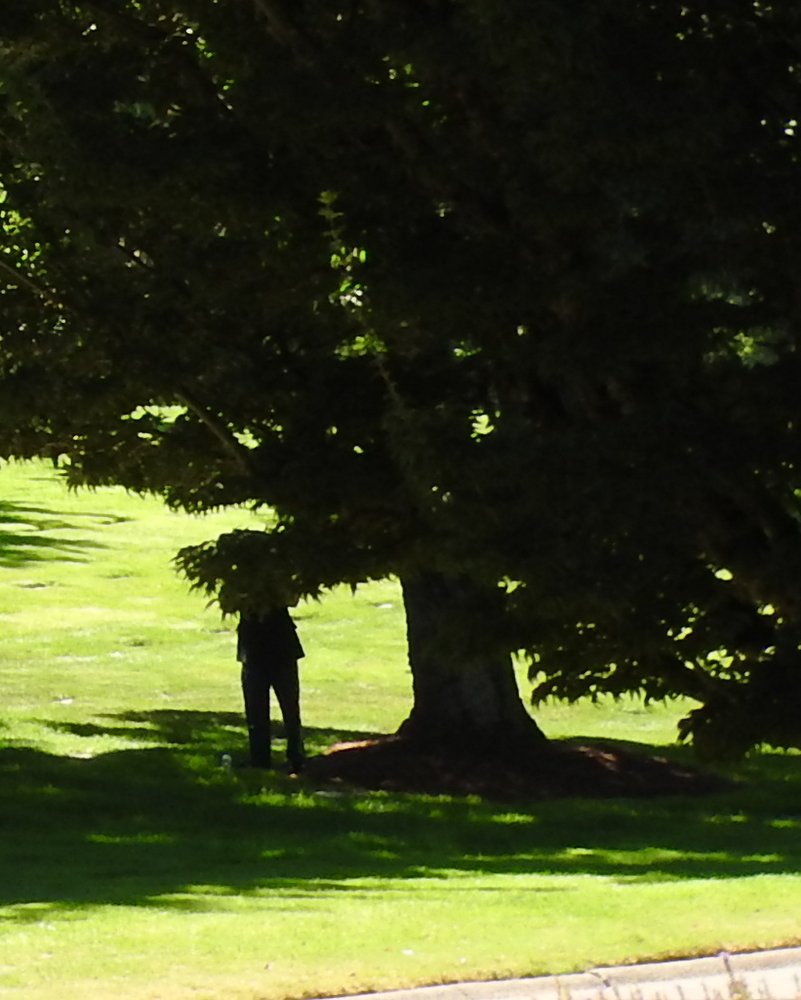 I’m not certain because I was shooting over people’s heads, but I think the figure by the tree is the one that played Taps before the pastor spoke. 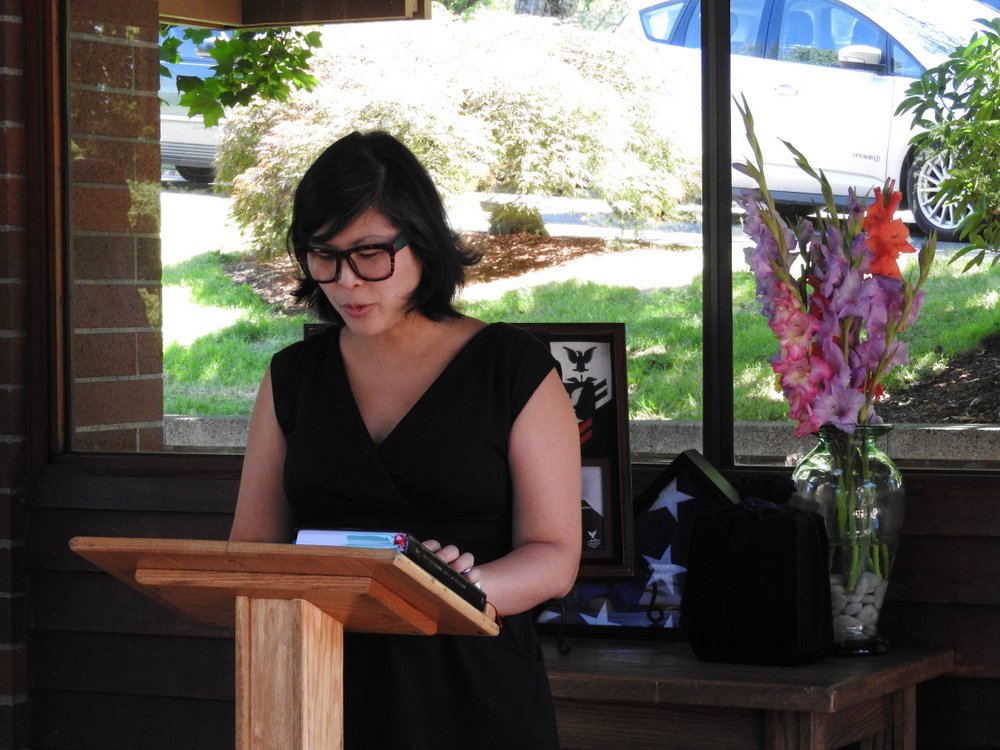 Mom’s church has a husband/wife pastoral team. This is Stephanie Mathis. She spoke for maybe five minutes and then asked others for memories of Cal. She was very warm and compassionate.

My younger sister and her family stayed with Mom from the very day Cal died until yesterday (Thursday) and then I moved in with Mom.  She’s still trying to get used to the idea that her husband of forty-four years is gone.  Continued prayers for her (Donna Stout) would be appreciated.