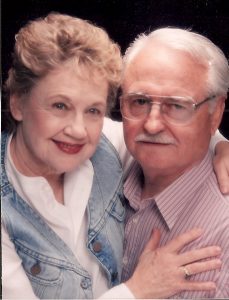 Mom and Cal in better days.

Some of you may be wondering why it has been so long since I’ve written.  I have kind of been on pins and needles as my stepfather’s condition worsened.  You may recall he had a rare, aggressive form of thyroid cancer.  He lost his battle this morning.

Let me eulogize Cal Stout to the best of my ability:

He was born August 19, 1924.  I know he grew up in Molalla, OR and I have heard tell that for a while when he was young, he lived in a chicken coop.  I know he had siblings, but without checking with Mom, I don’t know how many there were or how many are still alive.

(I’m leaving Mom alone today because I know she had hospice and the morgue in this morning and her phone has probably been ringing off the hook.  She just wanted some time to process what has happened.)

Cal went into the navy in WWII and I’m not sure if it was before or after that he married his first wife, Harriet.  They had three children: Nancy, Lanette, and Steve.  Years ago I had seen a picture of Cal holding baby Steve standing up in the palm of one hand.  He was strong!

Cal became a salesman for Allied Van Lines.  He also sold Watkins products.  I mention this because, as you know, a salesman has to be a good talker.  There was a time in Cal’s life when he was outgoing and had the gift of gab.

My older sister and I were talking with my son a little over a week ago and we were telling stories about Cal from when we were young.  Sherill remembered that we’d go out roller skating with his family and neither Sherill nor I were very good, but Cal would invite us out on the floor with him.  He was an excellent skater.  He could skate backward and take our hands and make us look pretty good!

I remembered that once when I was young, I happened to see on a calendar that it was Children’s Day.  It was a Sunday and I went around complaining to everyone that we celebrate Mother’s Day and Father’s Day, but nobody ever celebrates Children’s Day.  Cal heard and invited me to his home for dinner with his wife.  He gave me a bottle of perfume “for Children’s Day”.  Later I went to my first slumber party, not realizing that girls usually have those for their birthday.  I hadn’t brought a present, but I had brought that bottle of perfume with me, so I took it into the bathroom and wrapped it in toilet paper and gave it to my hostess.

My son thanked Sherill and I for telling him these stories because he never really knew Cal.  It’s not that he hadn’t grown up around him, but Cal became the silent one in the corner at family gatherings after he married my mother on April 15, 1972.  I think he felt some guilt about divorcing his wife and marrying Mom and it put a complete damper on his personality.

I was a teenager when Mom and Cal married.  You know what those years are like.  I was very angry about Mom marrying him.  I had hoped that she and Dad would get back together and so I blamed Cal for “breaking up our ‘happy’ home”.  Somehow I never grew out of that.  Cal and I had a strained relationship at best for about forty-five years.  Imagine an adult carrying childhood feelings for so many years!

It wasn’t until Cal was first diagnosed last year that God began nudging me about this old grudge I had with him.  I started working on a quilt for him, sort of haphazardly, and then one day a couple months ago, my sister called to say that all the treatment Cal had gotten hadn’t killed the cancer and Cal was starting to lose ground.  My thought was, “No!  I’m not ready for him to die yet.  I have to make amends.”  I worked diligently on the quilt, and when it was finished I wrote Cal a card.  In the card I apologized for all the years I had treated him so badly and I asked his forgiveness.  The day the package arrived, Mom called and put Cal on the phone so we could talk.  Cal told me that the quilt was lovely and that the card had brought tears to his eyes.  That was the sweetest conversation we had ever had.  I am so glad that I listened to the urging of the Spirit!

From that point on, Cal’s condition worsened in increments.  He’d be on a plateau and then drop to the next level.  Mom kept praying and hoping for a miracle, but even that began to change to prayers for his resurrection.  I’m not real sure what that meant to Mom.  On her good days she thought she could see some improvement in him and she hoped he would get better.  On her bad days, she acknowledged that he was dying and she despaired.

Through it all, my sister, Sherill, kept me informed about what was happening.  I had originally wanted to be there just before he died so I could be there for Mom, but no one knew if it would happen quickly or slowly.  At 5’8″ his weight eventually got down to 103 lbs. and he was in such a weakened condition that his heart could have given out.  Then I found out that there are going to be two services for him: a graveside service at the military cemetery in Portland (remember, he was a WWII vet), and a couple weeks later a memorial service.  I knew that Cal’s children would want to be there as he was dying, so I decided to wait and go for the two services.

At the start of this weekend, my sister told me that Cal was in a coma.  I knew that meant his death was imminent.  Every time the phone rang I expected to hear that he’d died.  This morning when the phone rang, I knew that this was the call I had been expecting.  Sherill told me that Mom had been praying Cal would go on the 19th, a month before his birthday, so that she could always remember the date, and God answered her prayers.

I had heard for months about how much Cal was suffering.  Today I kept thinking about his first day in heaven.  His parents were there to greet him, I imagine, and any of his siblings who had gone on before.  Possibly even his ex-wife!  I could picture him being robust and strong again.  After years of being the humbled, silent grandpa in the corner during family gatherings, I envisioned him being happy and outgoing again.  I sang all the songs I could think of that had to do with heaven.

Heaven is a wonder place,

Filled with glory and grace,

I want to see my Savior’s face,

Heaven is a wonderful place!

Sherill told me that when Mom called her this morning, she was crying.  Mom loved Cal dearly and if anything humanly possible could have saved him, Mom left no stone unturned.  She tried various diets and she had everyone praying for him.  She did not want to lose him.  Besides her deep and abiding love for him, she has also never been alone in her entire life.  Up until Cal’s illness, Mom had not even been in charge before.  She had to do all sorts of scary things in the last few months, like find her way around town on her own.  This is going to be hard for her.  Please keep her in your prayers.  Her name is Donna.

I would appreciate your prayers too.  I am waiting to hear when the graveside service is going to be and then I need to arrange flights and transportation and where I’m going to stay, etc.  I’m going to be helping Mom with a slide presentation she wants to show at Cal’s memorial service.  I also have other business I need to take care of while I’m there.

And Mark could use your prayers.  He’s going to be staying here for two weeks holding down the fort and working with my replacement.  This has also brought up memories of when his dad died.

While you’re at it, why don’t you hold Cal’s family and Mom’s in prayer.  The last few months have been difficult for all of us.  I had heard that while Cal was comatose, his son came and spent the afternoon reading Psalms to him and singing hymns.  Cal is in a better place and I know he’s happy, but there are going to be a lot of family members who miss him.