It has been so cold in the house that generally I sit in front of the fireplace in my winter coat and stoke the fire all day.  It was every bit as cold in the house this morning, but there was a warm breeze outside.  I opened all the windows and doors to let the heat in, and then I went outside to work in the yard.

I am the first to admit I’m not much of a gardener.  I consider it back-breaking work, and most of the time the things I plant don’t do well.  I like bulbs because they can survive anything.

So Mark suggested that I rake up the leaves that were all over our flowerbed, left overs from last fall.  He gave me the proper tools for the job, and then he left to hand fliers out to the different campgrounds about his RV repair service. 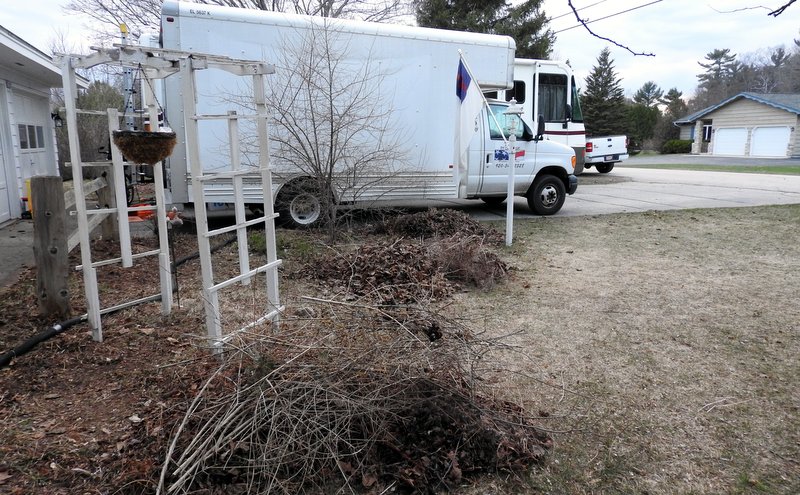 I made three big piles of leaves and sticks just off the flowerbed out front. 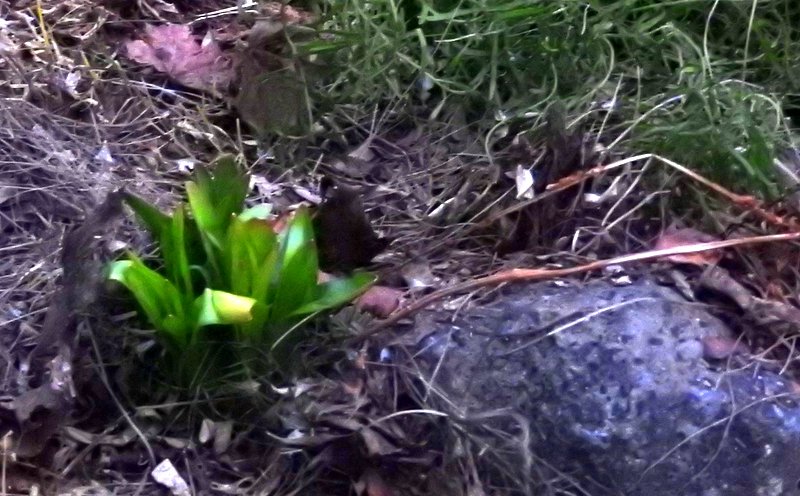 In the process, I uncovered some growing things.

Spring is really late here this year.  When we arrived in late April last year, things were already beginning to grow and bloom.  Last year, the forsythia bush by our mailbox was a profusion of yellow blossoms.  I noted today, as I examined it closely, that there are some tiny, sealed up buds beginning to show on the branches.  I pruned it away from the mailbox.  Last year the mailbox was buried in the middle of the bush.

After raking the leaves, I was beginning to get in the groove of things.  I decided to tackle the brambles that are spreading from the woods into our yard. 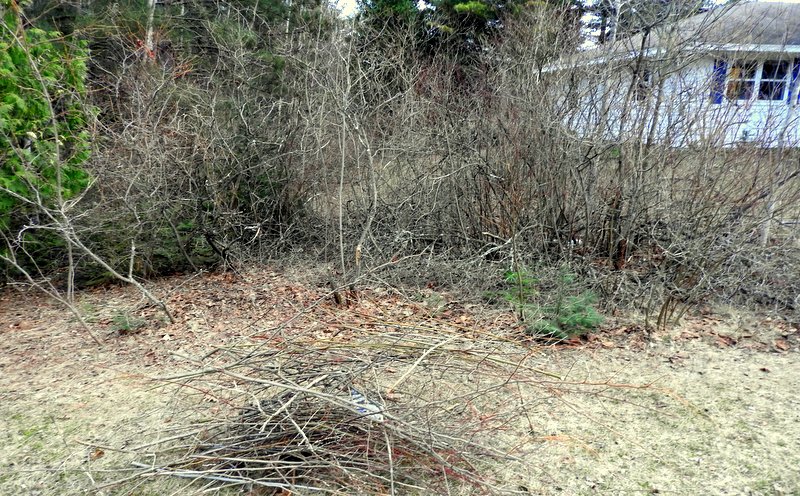 I had two piles, but Tucson spread the other one around the front yard.

It’s hard to tell from this picture that I made any headway at all, but I used clippers to cut down all the little suckers I could and Mark could sure tell the difference when he got home.  I worked from about 10:00 this morning to 4:00 this afternoon.  I took a lunch break and two other breaks because I’m not used to working so hard.  There was still a lot I would have liked to get to, but I had to stop and clean myself up for a meeting at The Viking this evening.

Mickie, my boss, asked me to be there by 4:45 so I could help with taking money as people came in to pay for the food.  Mark came a little later.  There were at least sixty people in attendance.  They are members of Door County North.  Most of them own businesses in Ellison Bay.

As I’ve said before, I am an employee of Door County North.  What Mickie does is basically try to put Ellison Bay on the map.  A lot of tourists either stop in Sister Bay or they go through Ellison Bay on their way to Gills Rock where the ferry to Washington Island is.  Ellison Bay is so small that we don’t even have a stop sign to slow traffic down through town.  And yet there is a lot to see in Ellison Bay.  We have a number of shops and galleries, several good restaurants, a historical museum, a number of lodging options, a park, and a boat launch.  I may have missed some things in my list, but the point is, most of these businesses have kind of been passed by.  Mickie is doing a bunch of stuff to try to promote Ellison Bay and all it has to offer.

This also includes Rowley’s Bay and Wagon Trail Campground.  My former bosses, Tim and Kathy, were there.  We invited them to sit at our table and we had a delightful visit with them.

After the meal, there was a meeting to talk about all the new things going on.  I hadn’t heard any of this before the meeting so I was glad I went.  One of the things discussed is that they are going to put cherry red picnic tables around Ellison Bay, including one next to Kubie’s book store.  You might remember I volunteered at his book store last year and he sent boxes and boxes of books with me that he was weeding out thinking I could sell them and make a little profit.  That didn’t work out so well for me, but I was pleased to hear that a project I know he has been asking for for several years is finally going to happen.  He thought it would be nice to paint a mural on the side of his store that depicts something about Ellison Bay.  It sounds like he’s going to get it this year!  They also said that there is a group who is working to get some crosswalks put in and a couple signs that say, “Slow down for pedestrians”.

You may think that this sounds like small potatoes, but the community here is very excited.  I like being part of a community that thinks putting cherry red picnic tables around town is going to be a good thing!