It was so good to sleep in our own bed again last night!  Feeling more rested this morning, we tried to stop at Camping World to get air in the tires of the RV, but no one was there who could do it for us so we commenced our journey. 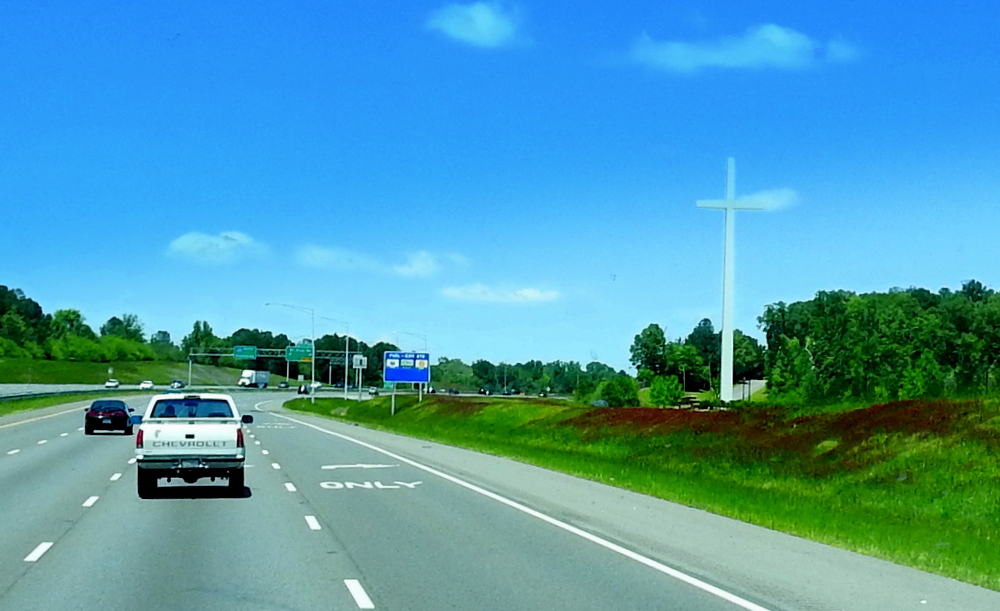 As we were coming up on it, Mark commented, “Now there’s a cross for you!” 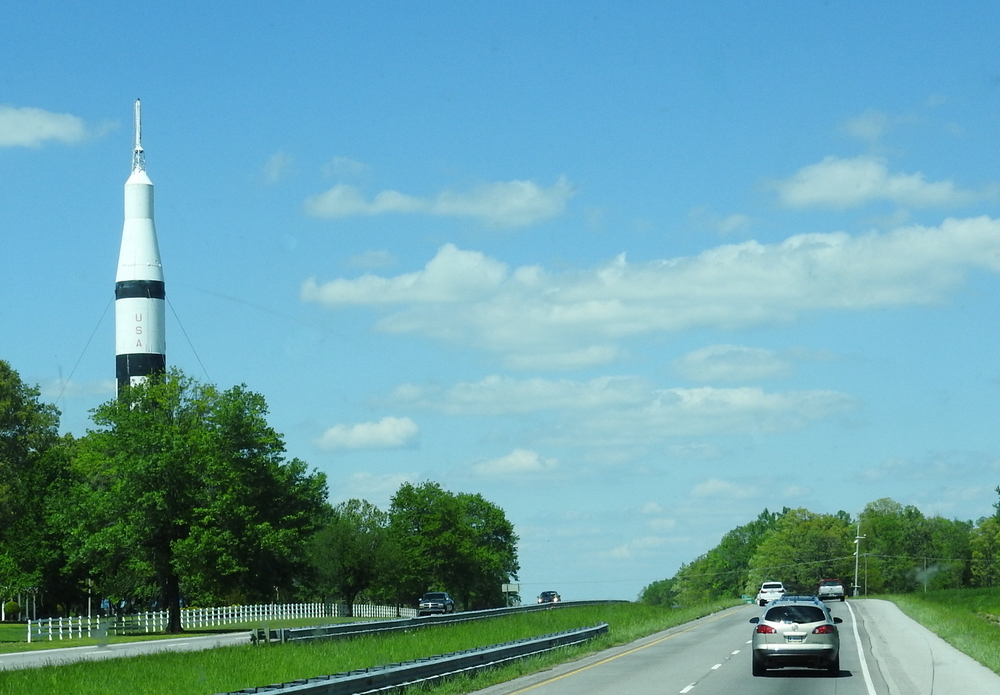 This looked like a Saturn rocket, and as we passed it, Mark said it looked like a memorial. Makes me wonder what it was doing in Alabama. 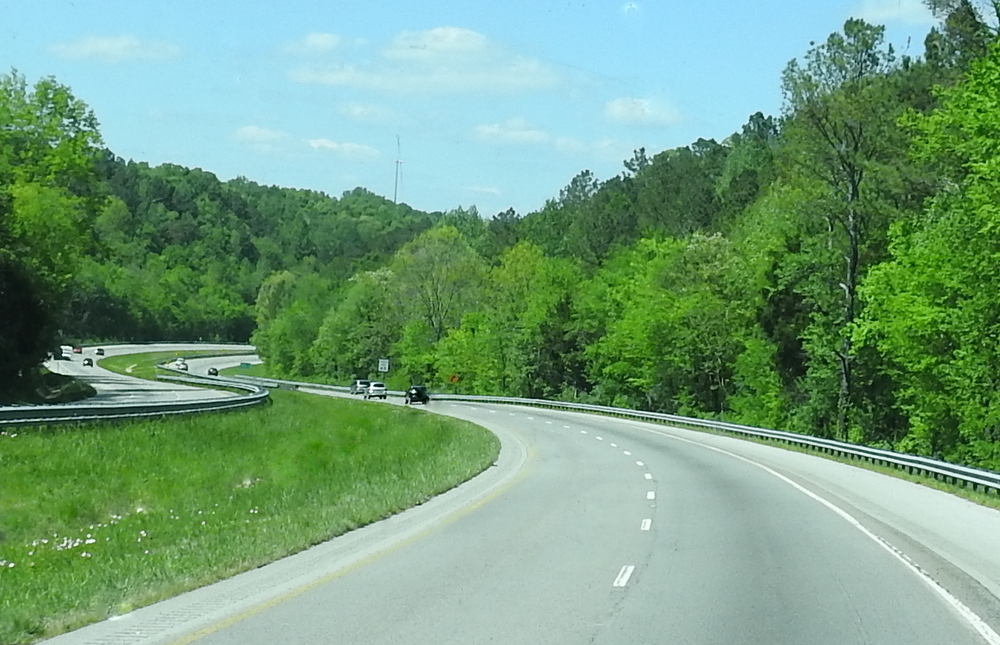 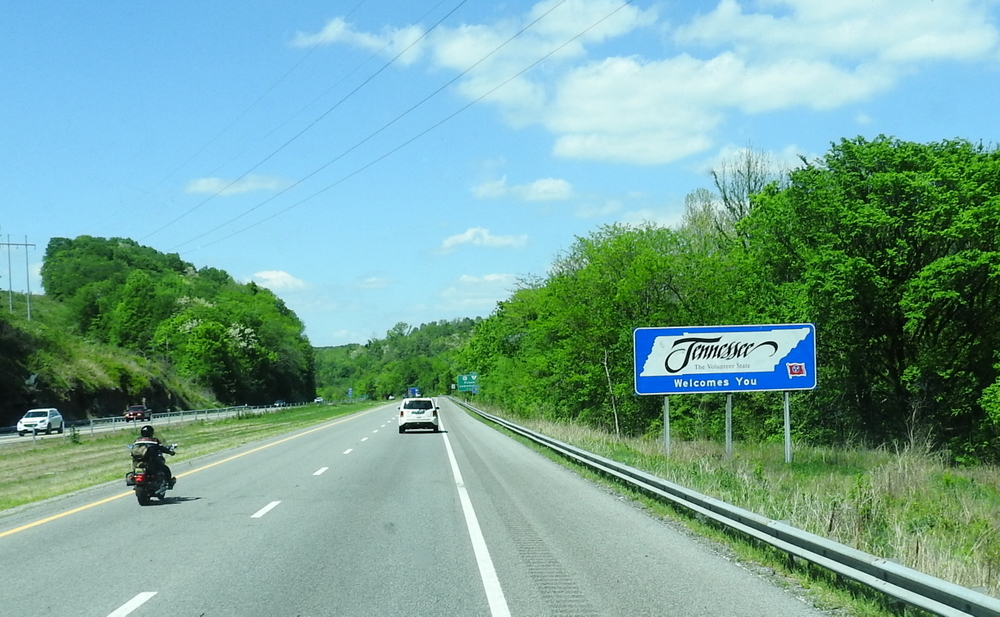 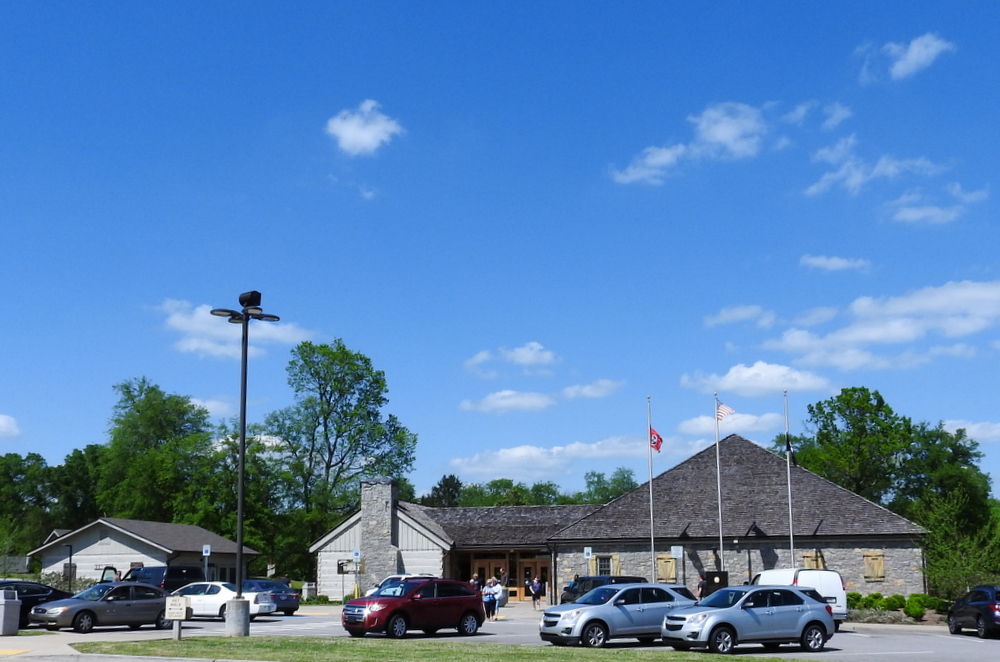 We stopped in the visitor information center in Tennessee. This reminded me of the frontier and Daniel Boone somehow. 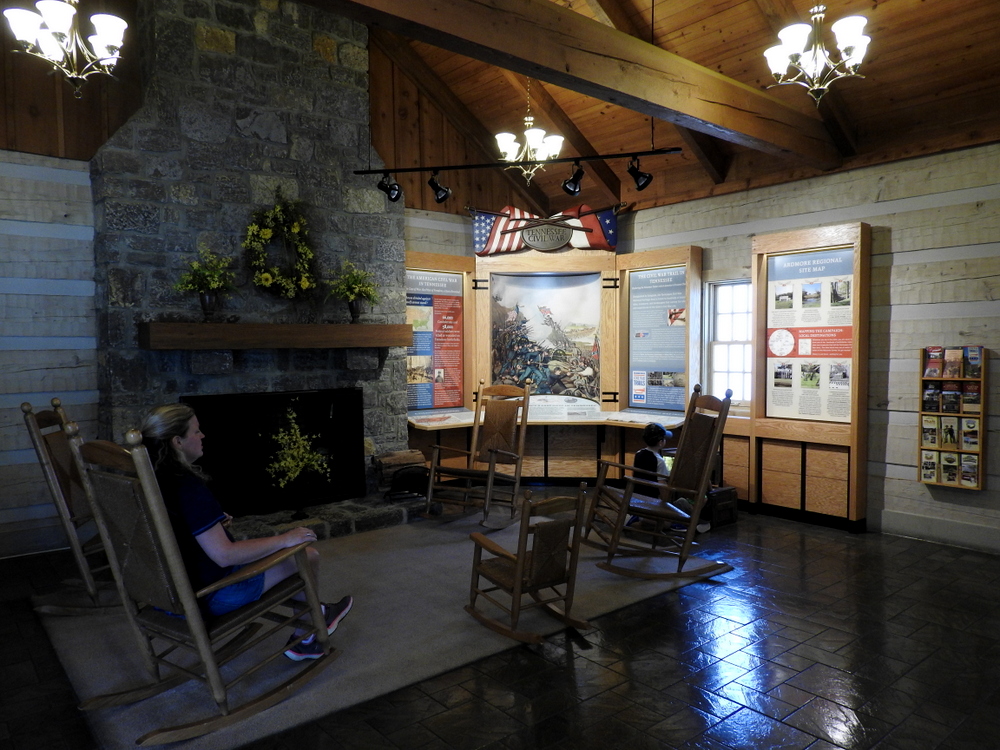 They had a cozy sitting area inside. 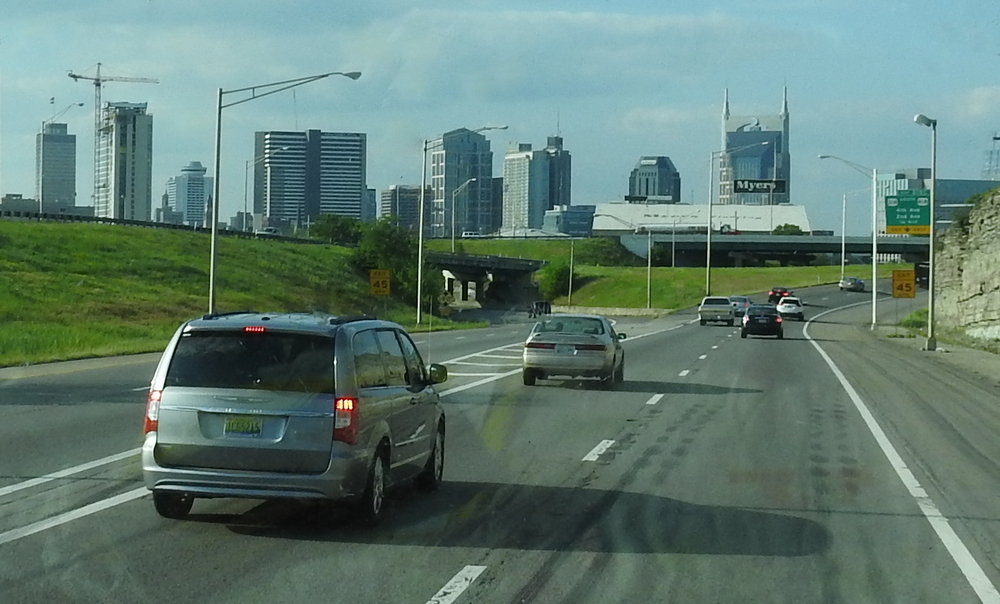 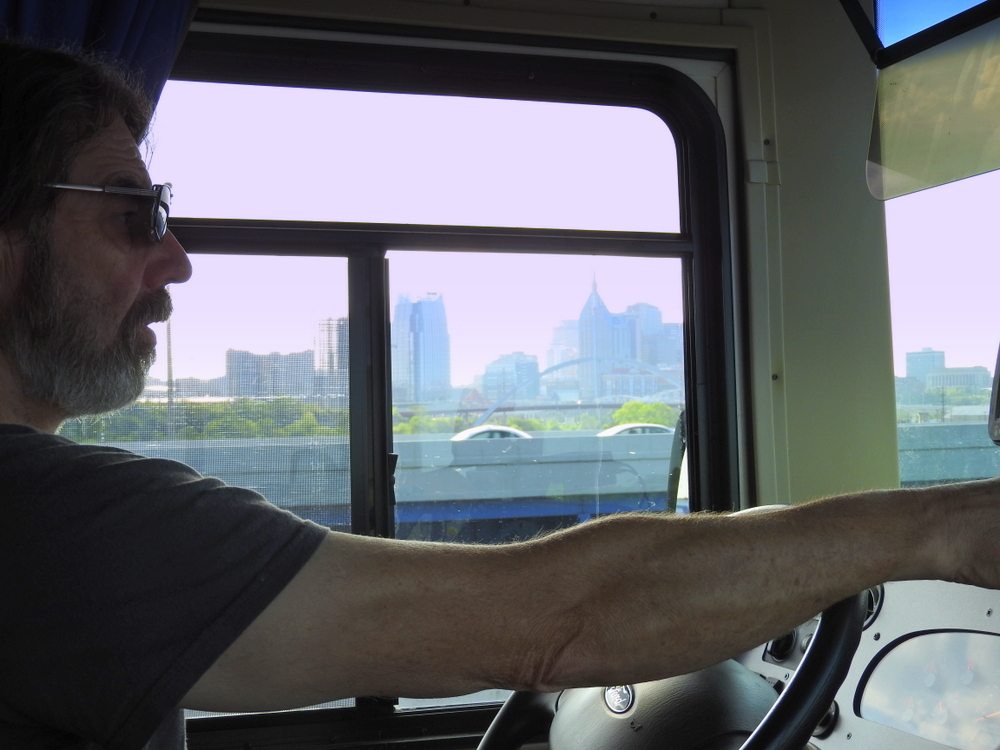 We were stuck in bumper to bumper traffic for a while in Nashville, so Mark turned on his CB radio to see if any truckers could shed some light on what was going on ahead. They couldn’t. 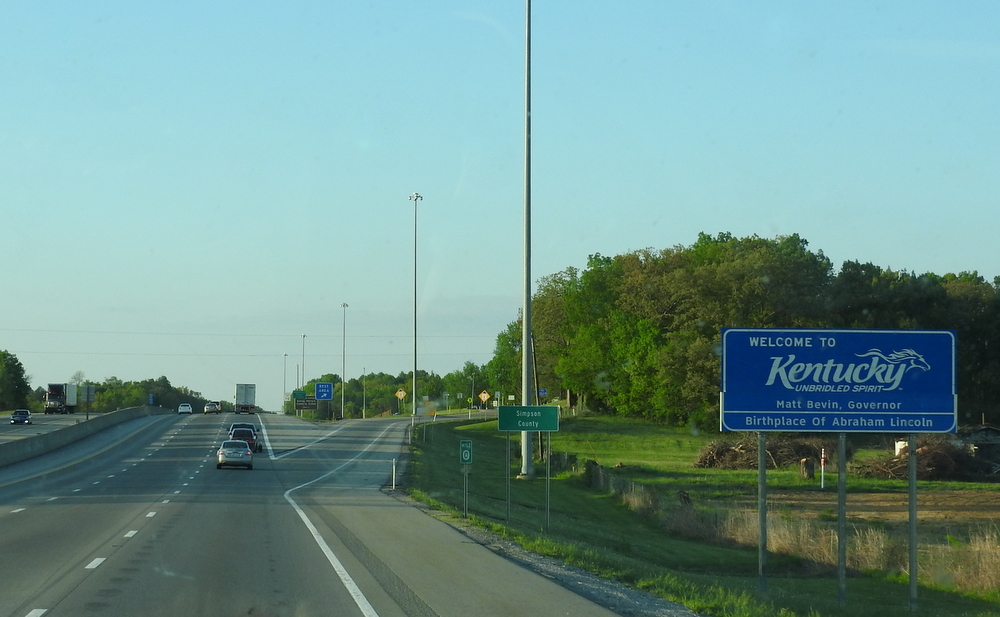 We finally crossed into Kentucky on I-65. Bowling Green is near the southern border.

Especially during the traffic jam, which was caused by a combination of road construction and a fender bender, I read some more to Mark from Ben Carson’s book.  I don’t necessarily agree with him on everything, but Dr. Carson has written some things in his book, One Nation, that have given me some spinoff ideas.

For instance, what if we did away with political parties altogether?  What if there was no Democratic party and no Republican party, but every candidate had to run as themselves?  Would voters then do a better job of researching the candidates and voting on the candidates’ stands rather than voting along party lines?  Or would they do as I’ve sometimes done in races where no party affiliations were listed and vote based on gender or name?  (Yes, I confess I have done this at times when I didn’t want to take the time to read everything in the voters pamphlet.)

What if we went back to the way the country was originally run, where the elected officials had jobs outside of government to support themselves and their governmental duties were volunteer?

What if the government and the entertainment industry started a process of long range planning to create a kinder, gentler society?  What if goals were set to reprogram people’s tastes so that movies would no longer show violent behaviors, music would focus on current issues and making the world a better place, and the gaming industry catered to fun family games again?  What if parents had behaviors modeled to them to help them in parenting, and children were rewarded for applying themselves in positive ways?  Maybe this is a cynical approach or maybe I’m espousing Socialism; maybe I’m talking about manipulating people in a way that interferes with individual freedoms.  On the other hand, isn’t the opposite currently at work on society?  Violence sells and money talks.  What if the money backed more sociable traits?

Mind you, these aren’t suggestions Dr. Carson has made, but some of what he’s written about has spurred some of my own thoughts.  On some things I agree with him.  He’s for equality for women in the workplace; he defines marriage as being between one man and one woman, but in every other way, he doesn’t believe in discrimination based on sexual orientation; he believes in Christ and is quite open about his faith.  Where I have a hard time with what he says is when he talks about “left wing progressives” as the culprits and rarely admits that right wing extremists are equally culpable for the ills in our country.  He’s also willing to go farther in freedom of speech — allowing people to go unchecked in making offensive statements — than I am.  I can see his point though.  If we tell people they can’t say what’s on their minds because it is offensive, then we are not having open dialogue about the issues.  I just don’t want to see us go back to a time when racial slurs or sexist comments went largely unchallenged.

I’m spouting off here, and if anything I’ve said is offensive to my readers, please talk with me about it.  These are mostly thoughts off the top of my head that I haven’t thought through very thoroughly and they are fairly recent, meaning I don’t have any great attachment to them yet.  I can be reasoned with.

1 thought on “From Bowling Green, KY”