Looking at the last date I posted, it’s been two weeks.  So much has happened in the last two weeks.  I apologize in advance if this gets a little long!

The last time I posted, I asked if any of my readers would be interested in buying the quilt I made as a fundraiser for ICR (International Christian Response).  One of my readers is Capi Reed, probably my number one fan in Oregon.  She is the administrative assistant at Reedwood Friends Church where I am still on the membership rolls, I think.  Capi wrote to ask me for permission to forward my post to several people at the church, and as soon as she did, one of the members contacted me to say she’d like to buy my quilt.  Her name is Lucy Davenport and she is starting a new bonsai business:  https://www.facebook.com/bonsaiakira/

Lucy shows her bonsai trees at quilting and garden shows and liked the floral theme of my quilt.  She wants to use it as a backdrop for her plants.  I would encourage you to visit her Facebook page and “like” her.

The last post I wrote was after the Quilting and Sewing Open House on Monday, March 7th.  On Saturday, March 12th, the photo club that Mark and I have been participating in entered our best photos for sale in the Sun N Fun Art Show.  Mark and I each had two pictures for sale at $40 each, plus I donated a photo for the art show’s fundraiser for the Humane Society.  Here are the photos I entered: 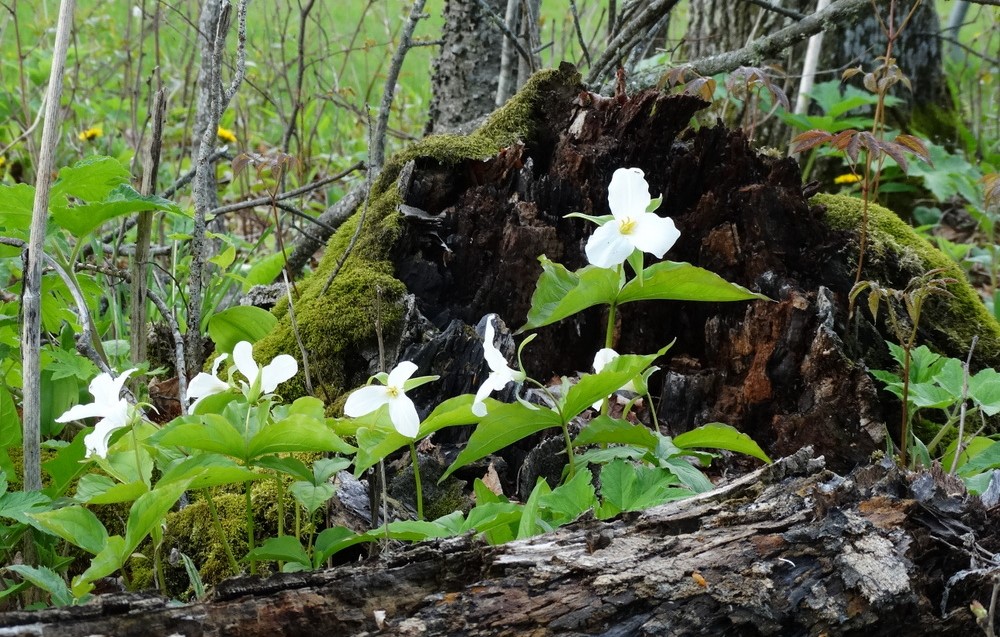 This was one I took in Door County, WI. 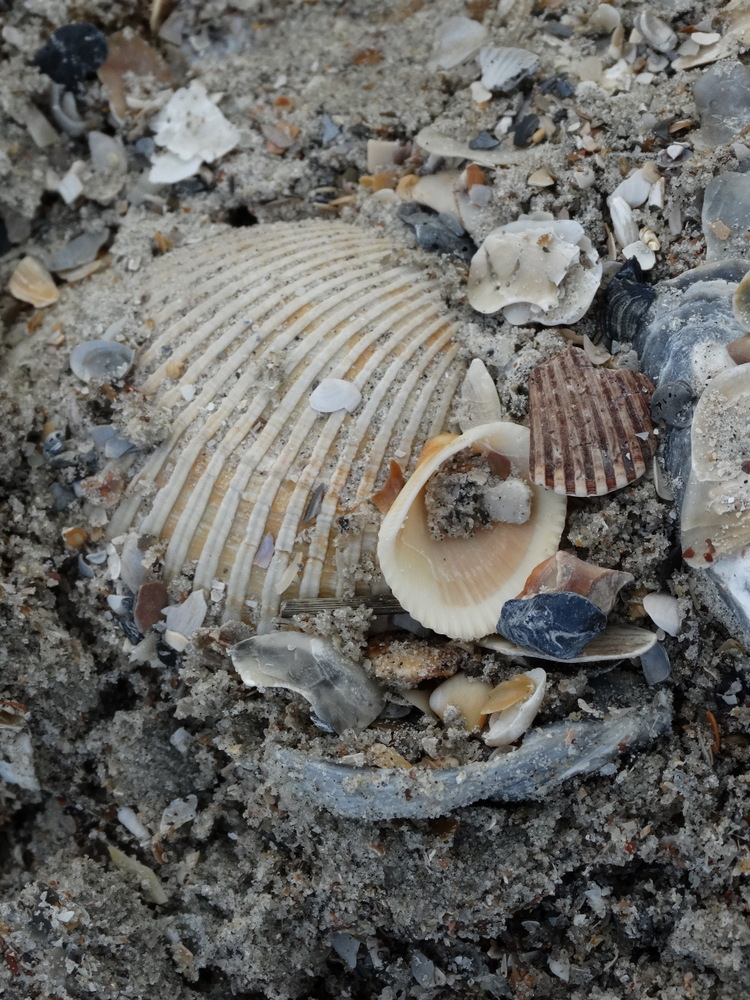 I sold two copies of this picture which I took on the beach of one of the Carolinas (can’t remember which)! 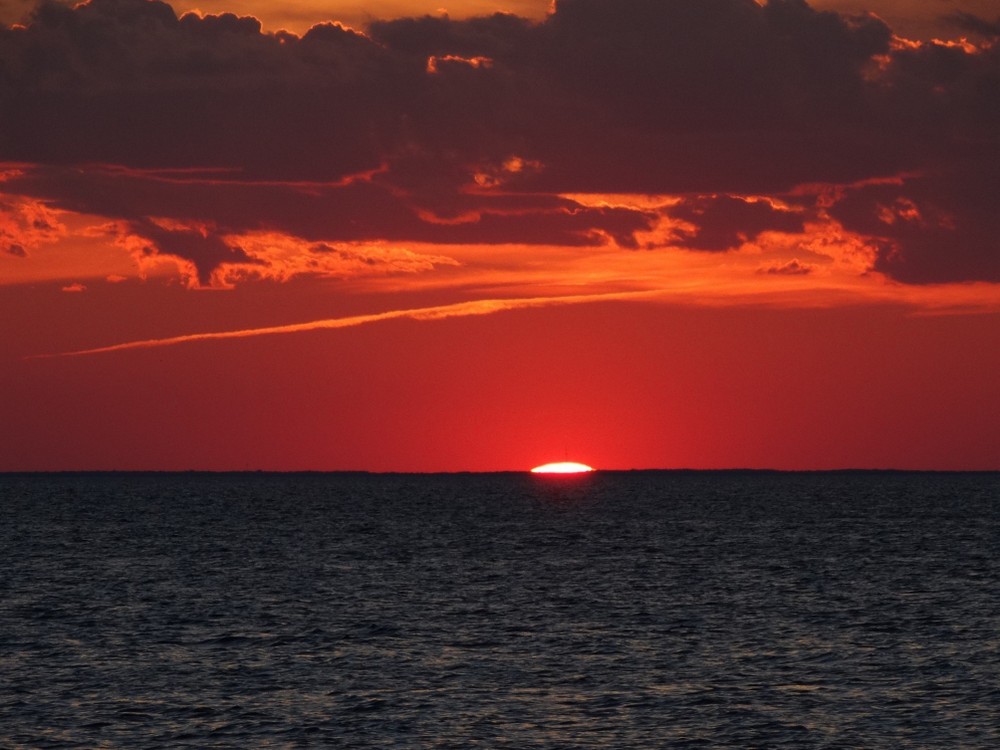 This is the one I donated for the Humane Society fundraiser. It sold for $25.

Mark also sold one of his photos.  You may be wondering how we were able to sell these for $40.  One of the members of our photo club, Trixi Huish, is a professional photographer who has had photos published in National Geographic and has done documentaries.  She has a metal printer, a printer that prints photos on aluminum plates.  The photos come out more brilliant than you’ve ever seen on paper.  Here is Mark standing in front of our display: 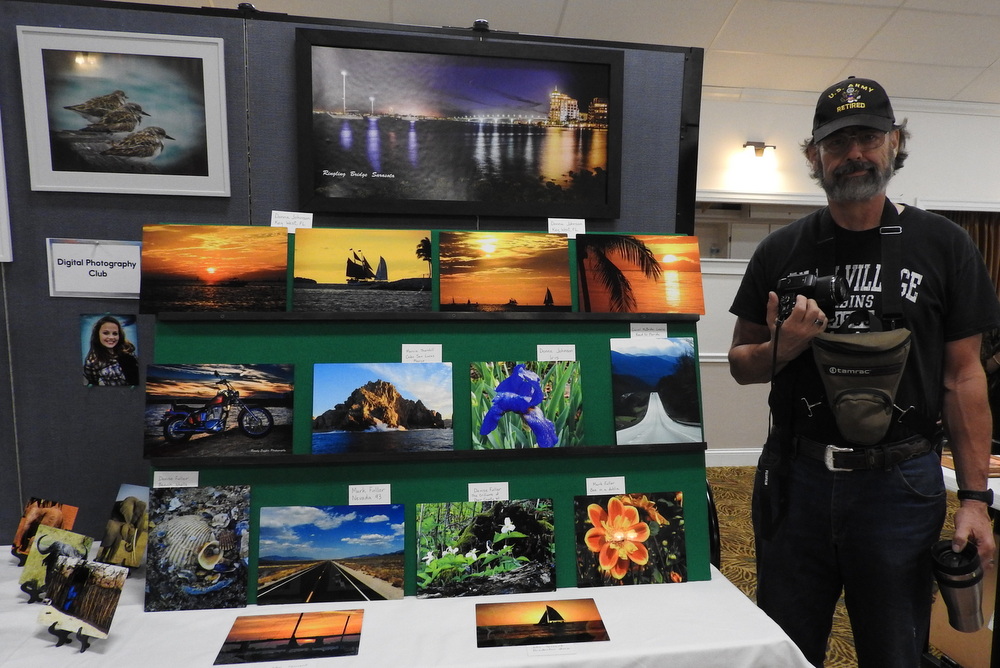 The four photos on the bottom row of the display are ours.  His two photos were the one of the road through the Nevada desert and the one on the end of a bee sitting on a dahlia.  (You can’t see the bee from here, but it’s in the center of the flower.) 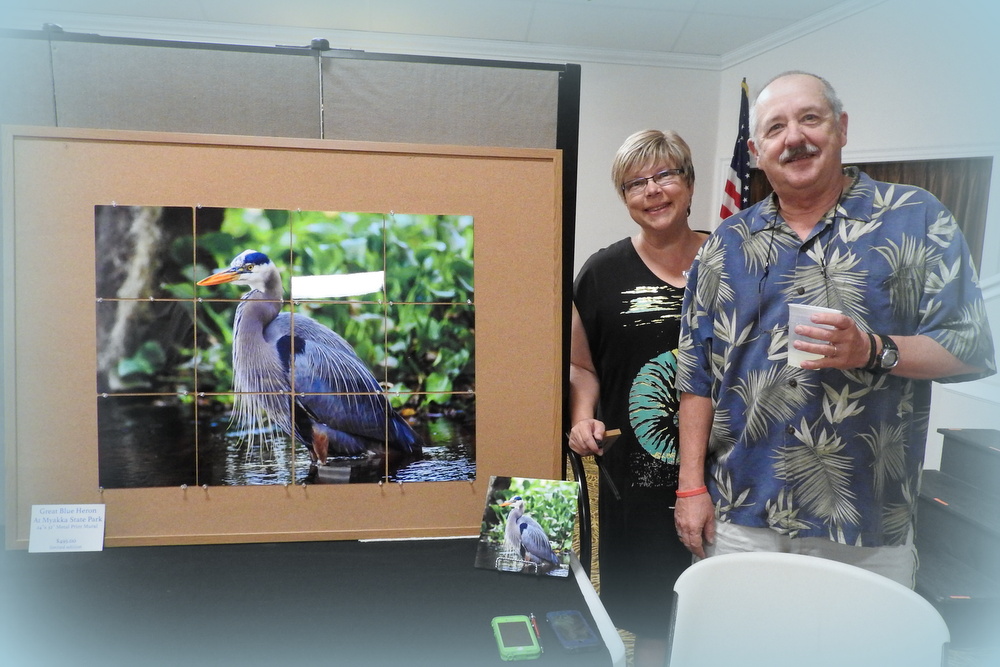 Trixi and her husband in front of one of her enlarged prints.  (The white rectangle is only glare on the photo from the overhead lights.  Trust me, this is a beautiful montage!)

We have had copies of the sold photos made, so if you see any you like, you have an opportunity to buy them from us!  😉

Later that evening after work, we went to the free dance and I tried to see if I could photograph moving people in the dark with my Nikon: 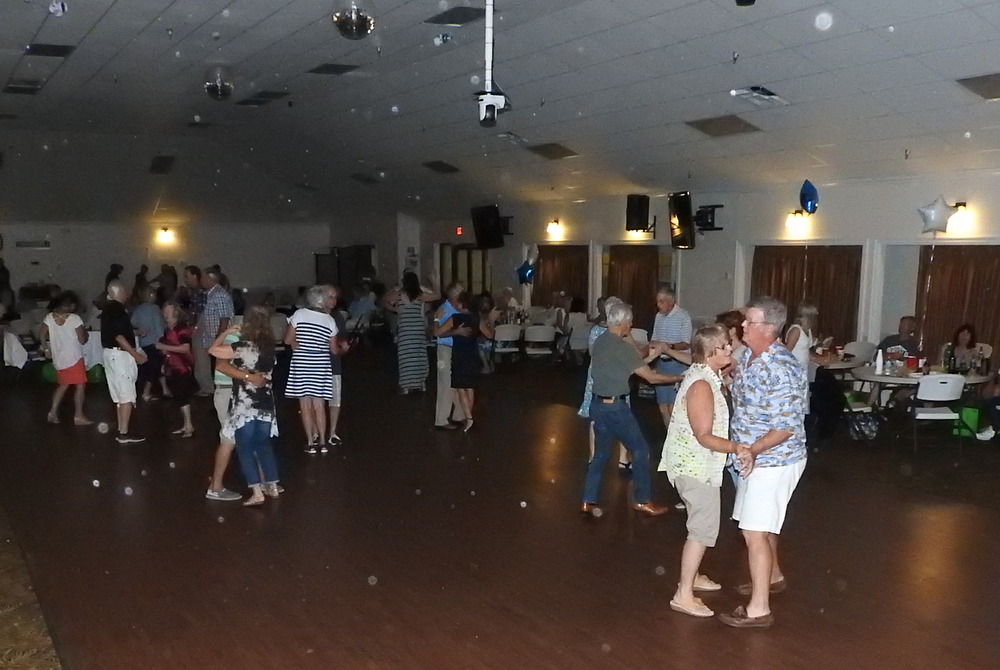 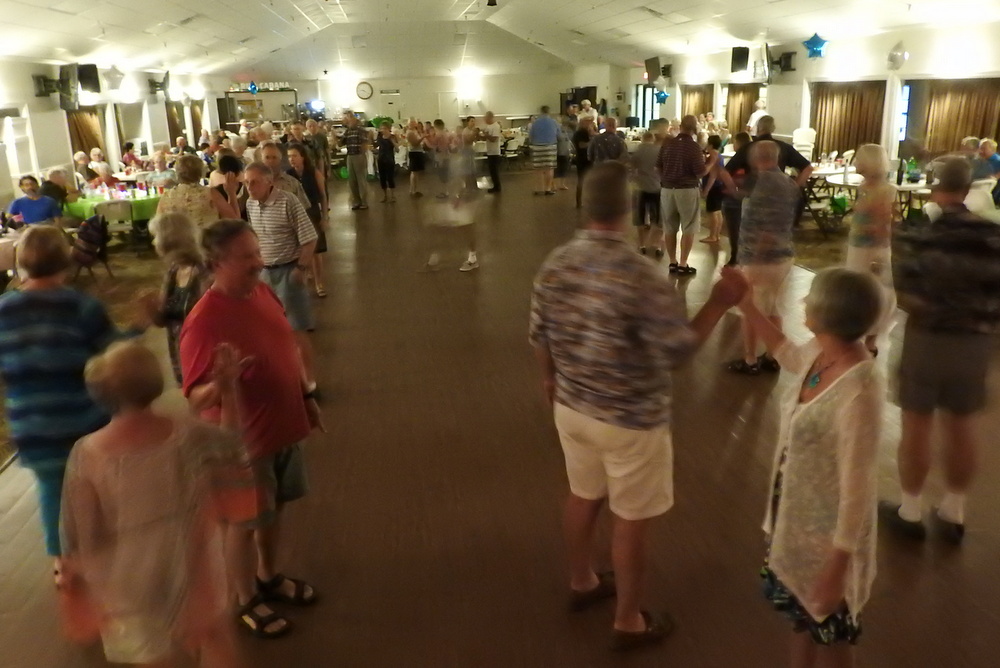 Without flash…This is a line dance called Cotton Eye’d Joe. 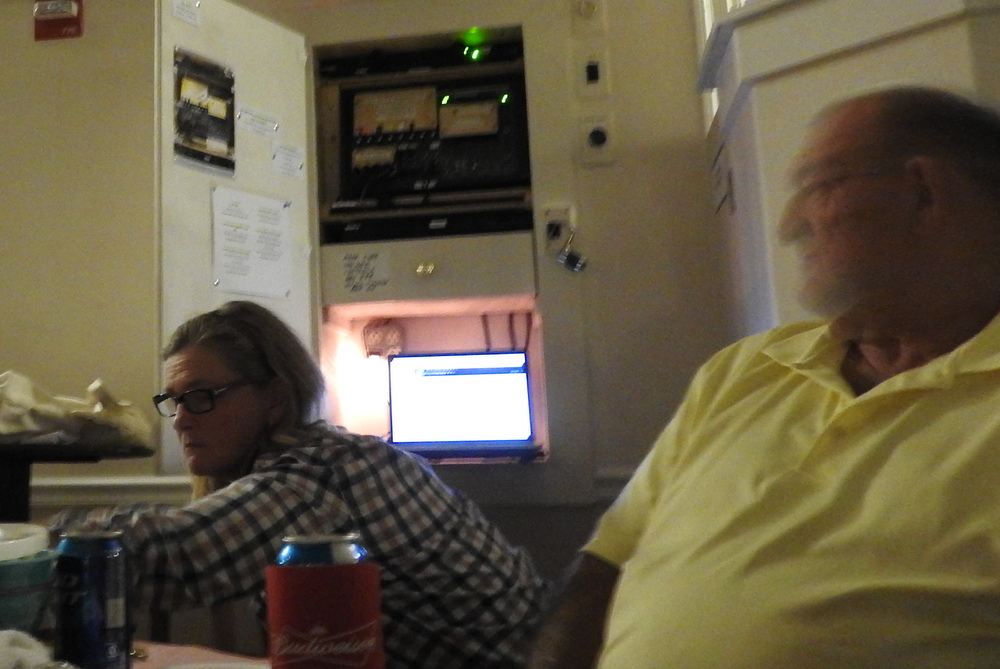 Our boss, Mary Beth, and our friend, WD. 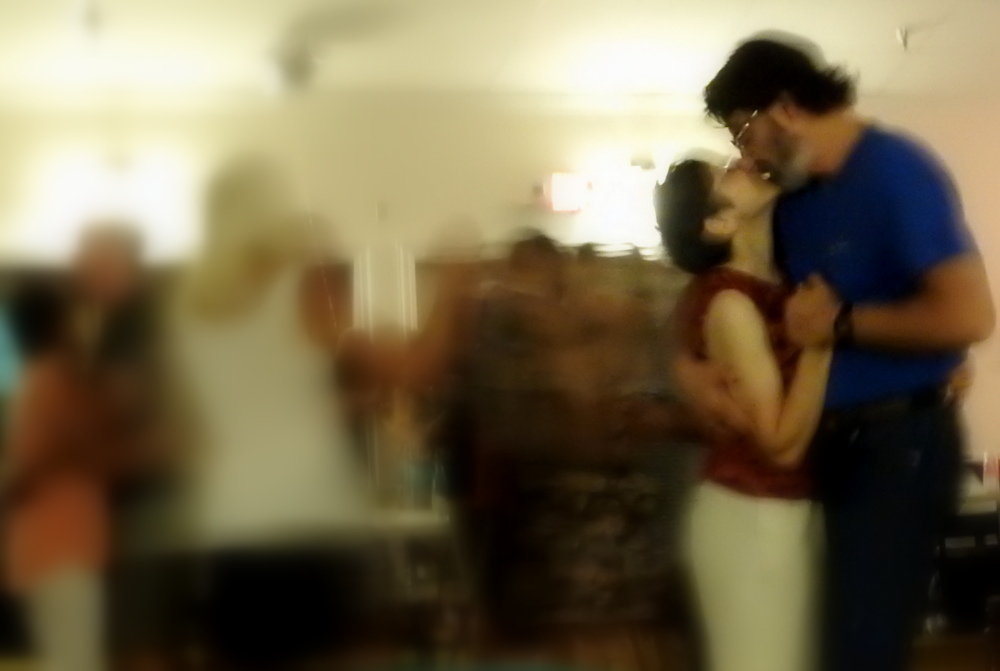 While we were dancing, WD grabbed my Nikon and tried to take a picture of us.

Monday, March 14th was Mark’s 62nd birthday.  We celebrated by taking a motorcycle ride to Sanibel Island.  We went to the “Ding” Darling National Wildlife Refuge with our cameras.  Here are the results: 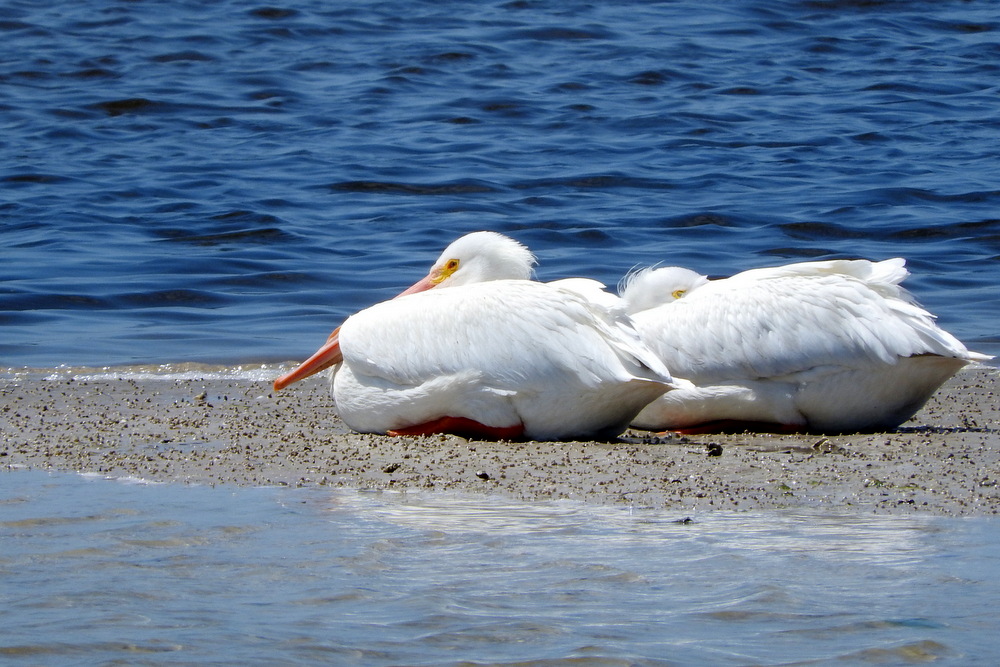 I think these are white pelicans resting in the heat of the day. 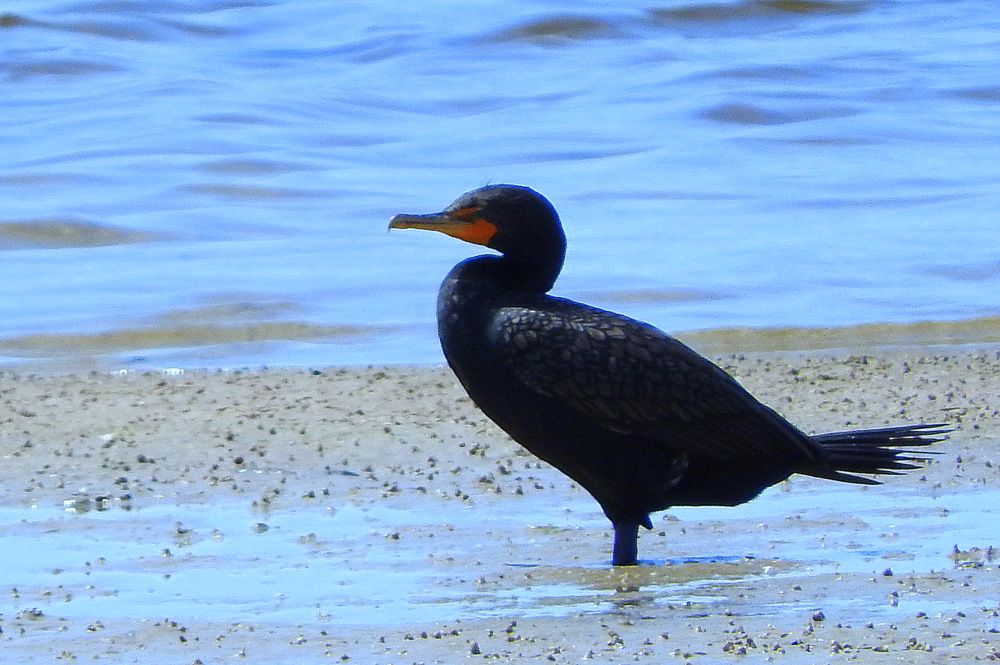 Not sure what kind of bird this is. Anyone know? 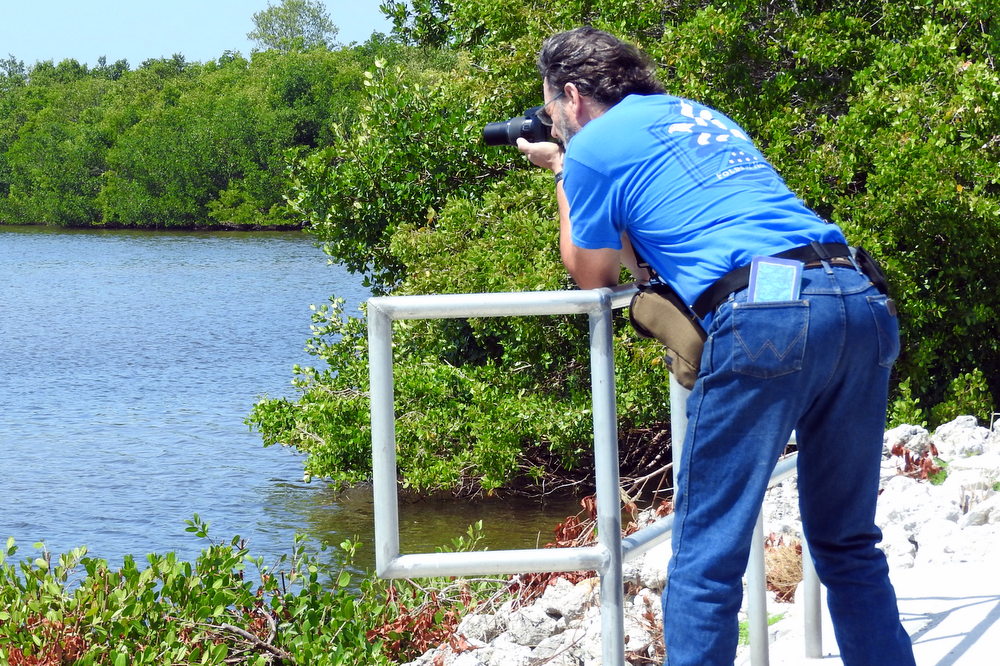 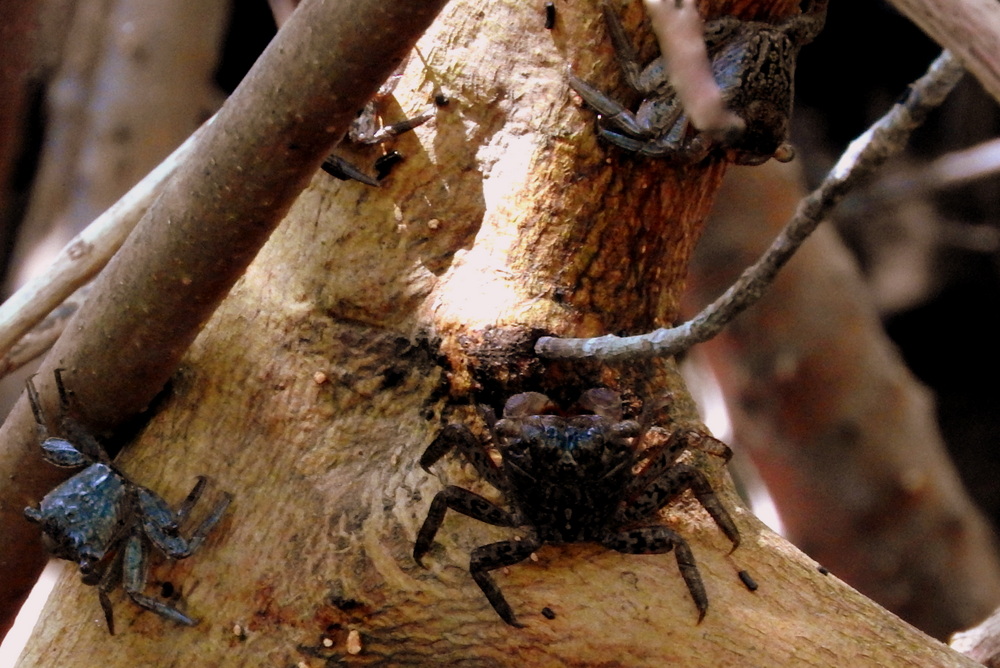 Tree crabs in the mangroves 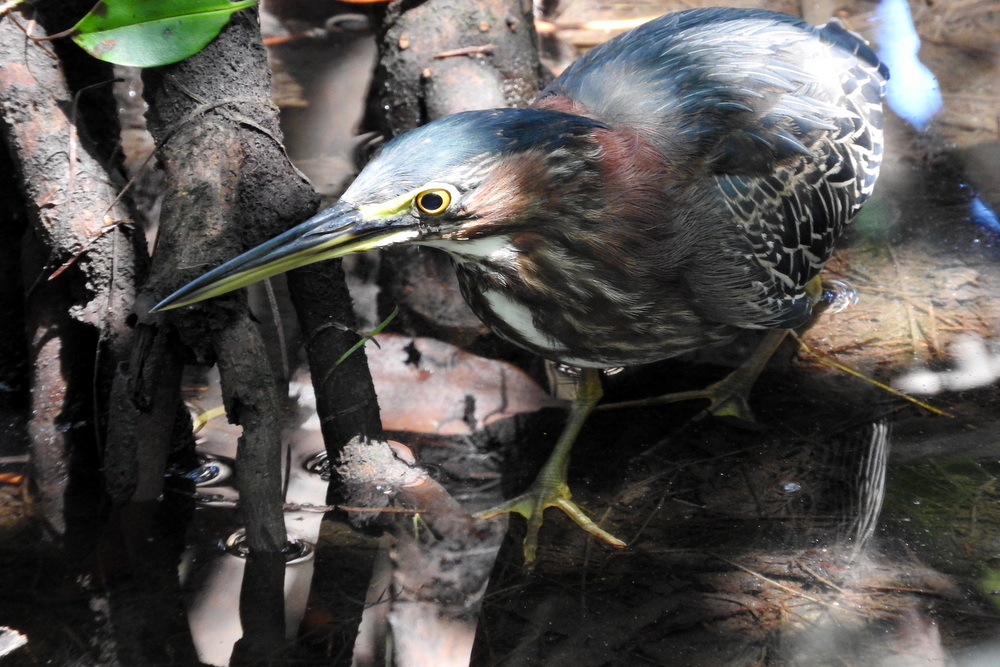 Someone said this was a green something. Any ideas what? 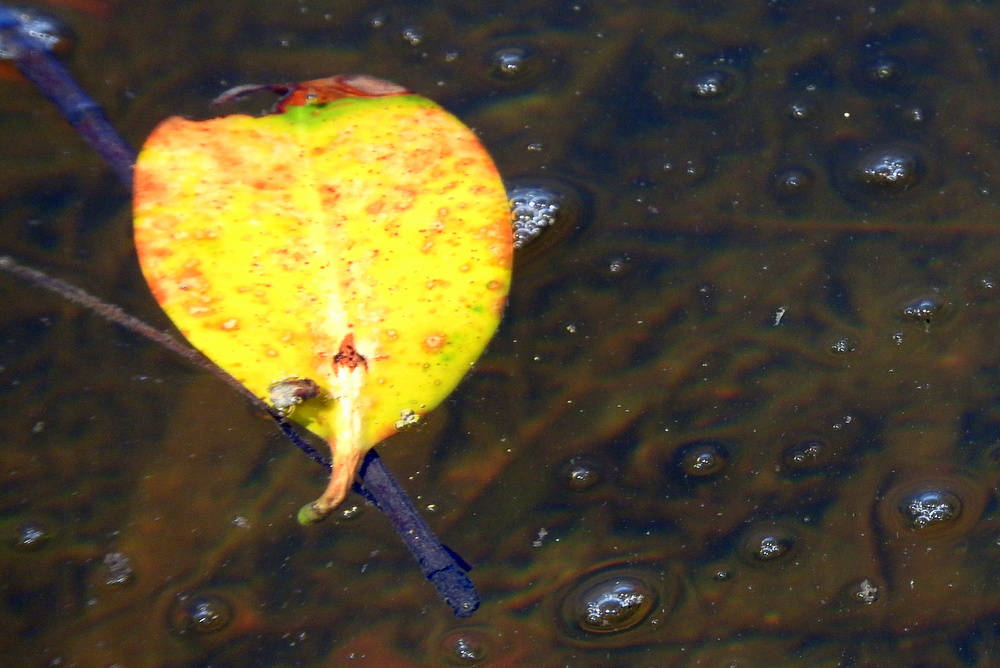 Leaf in the water 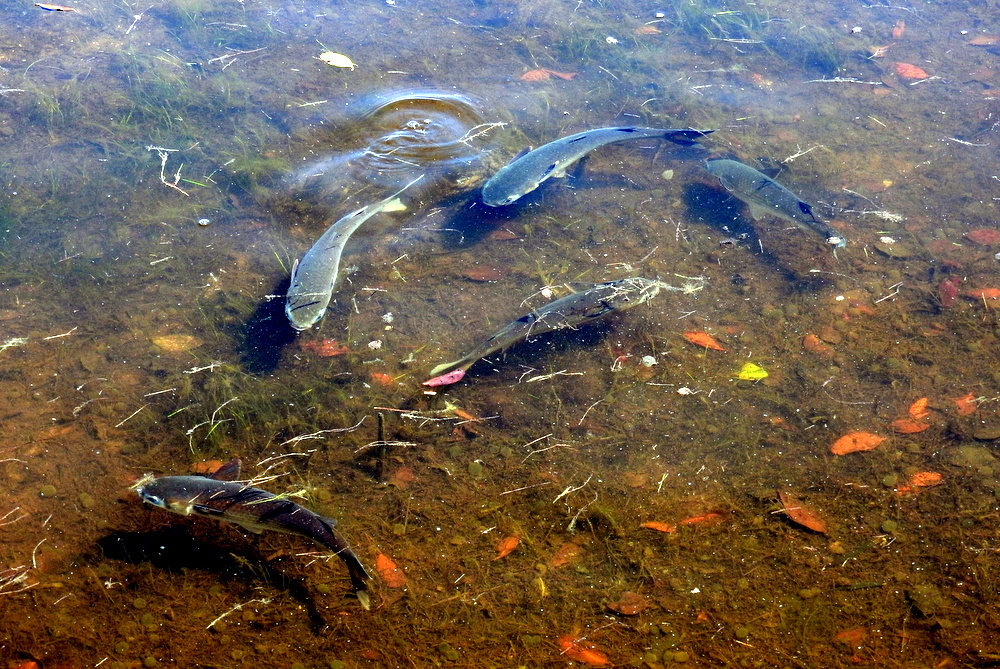 I think these were marlins 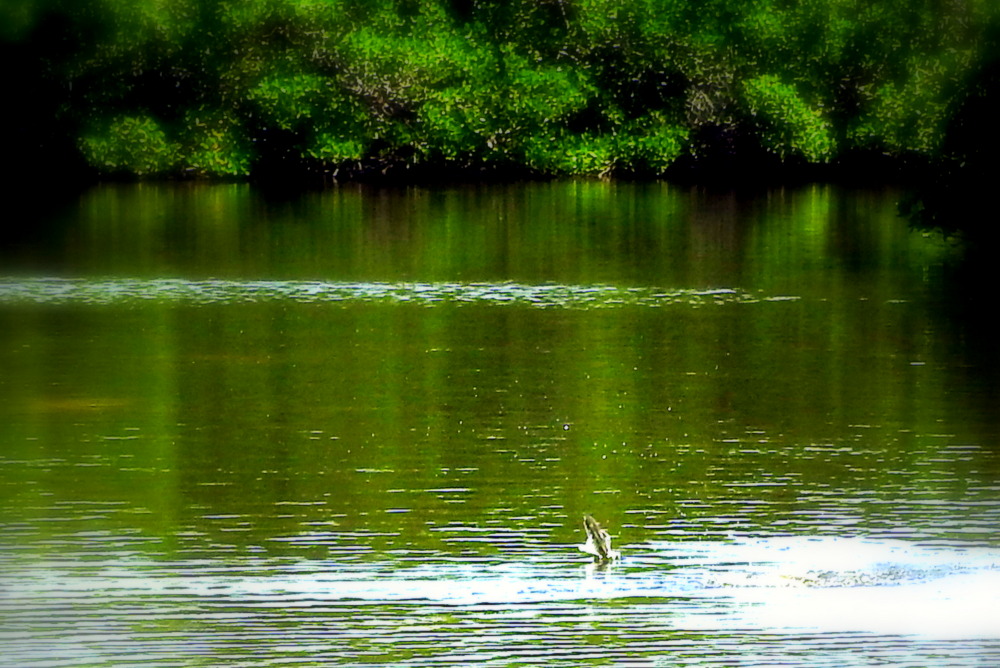 My new Nikon caught this leaping fish from about a quarter mile away! 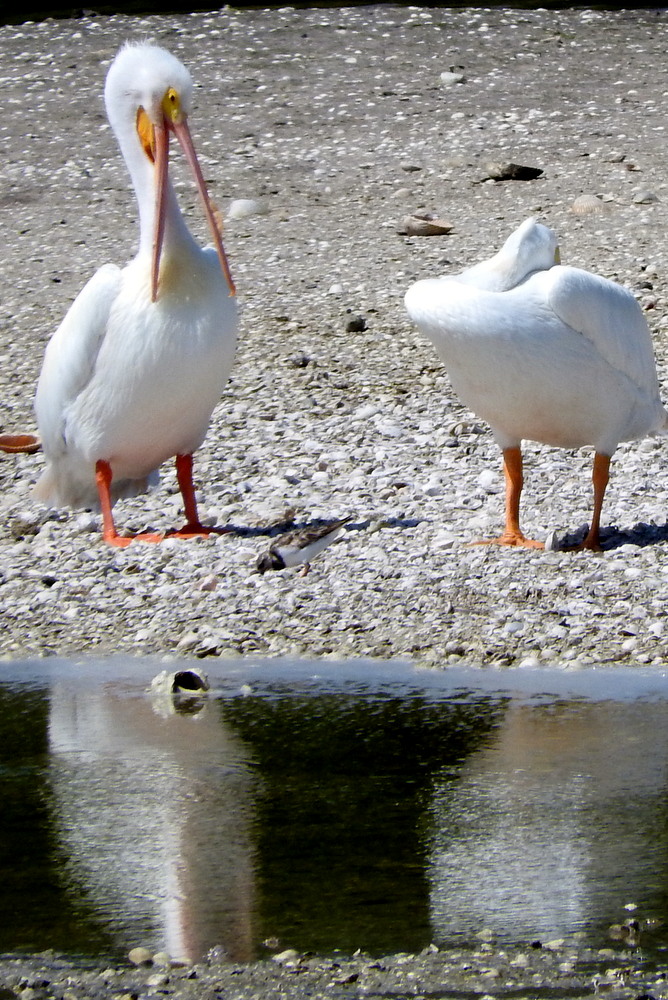 The pelicans started waking up. 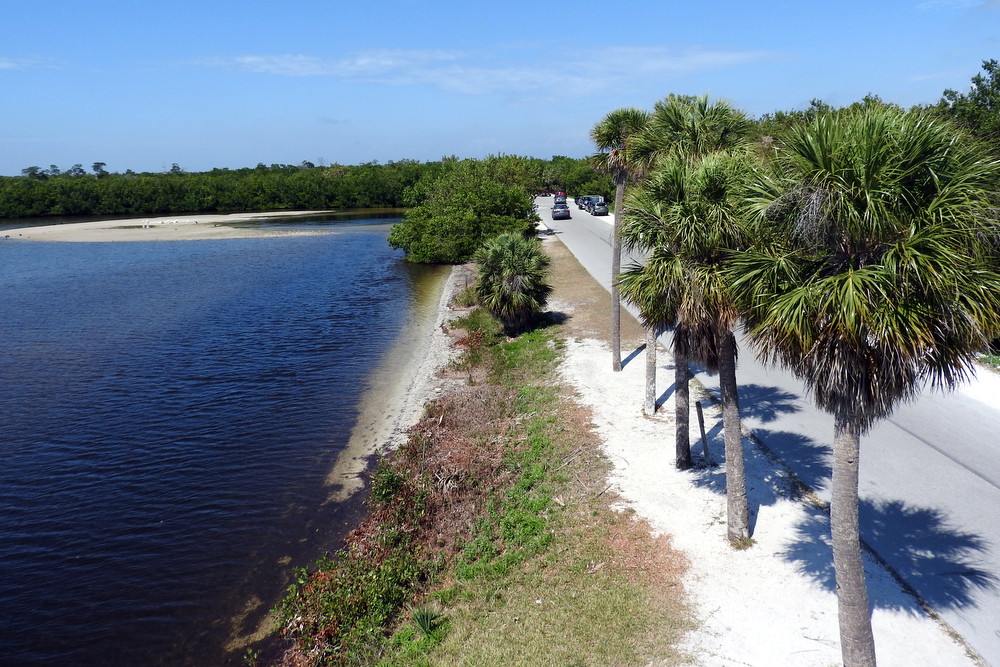 I was shooting from a tower. 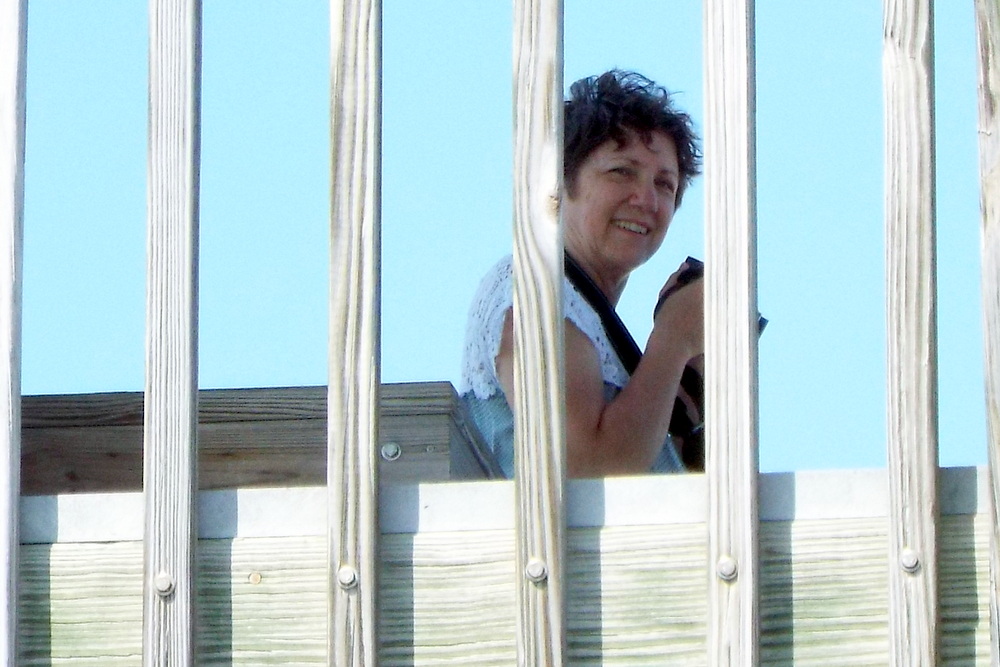 Mark caught me waiting to catch him coming up. 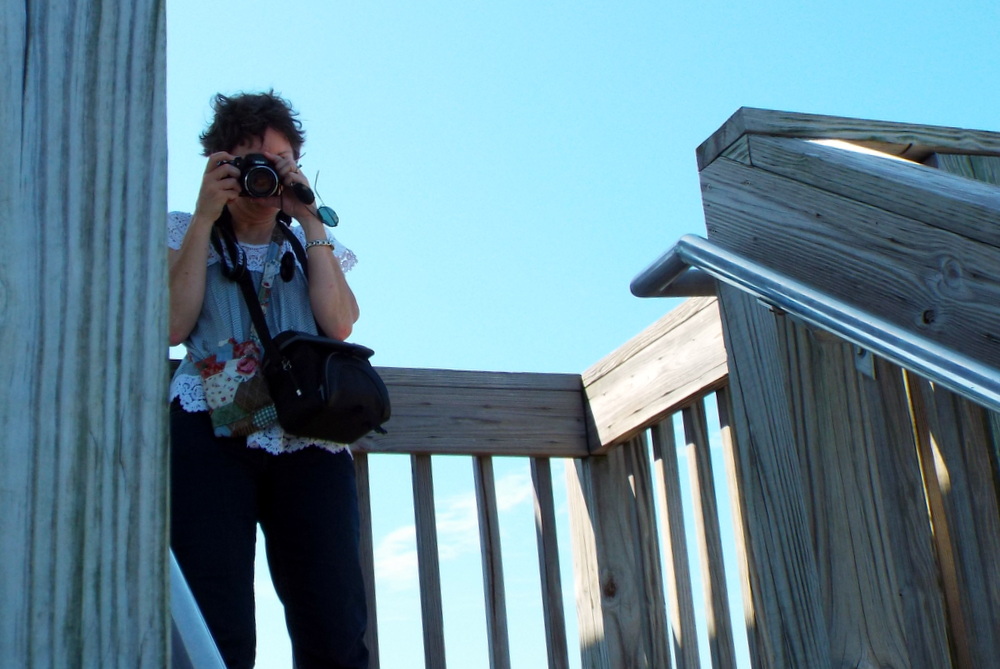 He poked his head around the corner and caught me again. 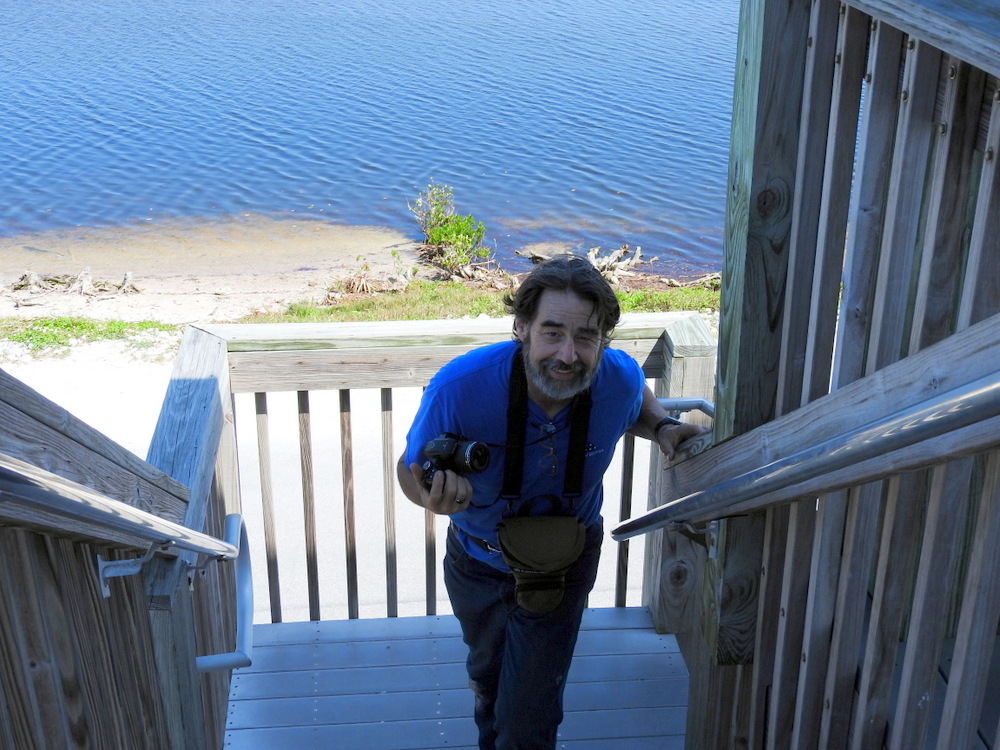 Then he let me catch him! 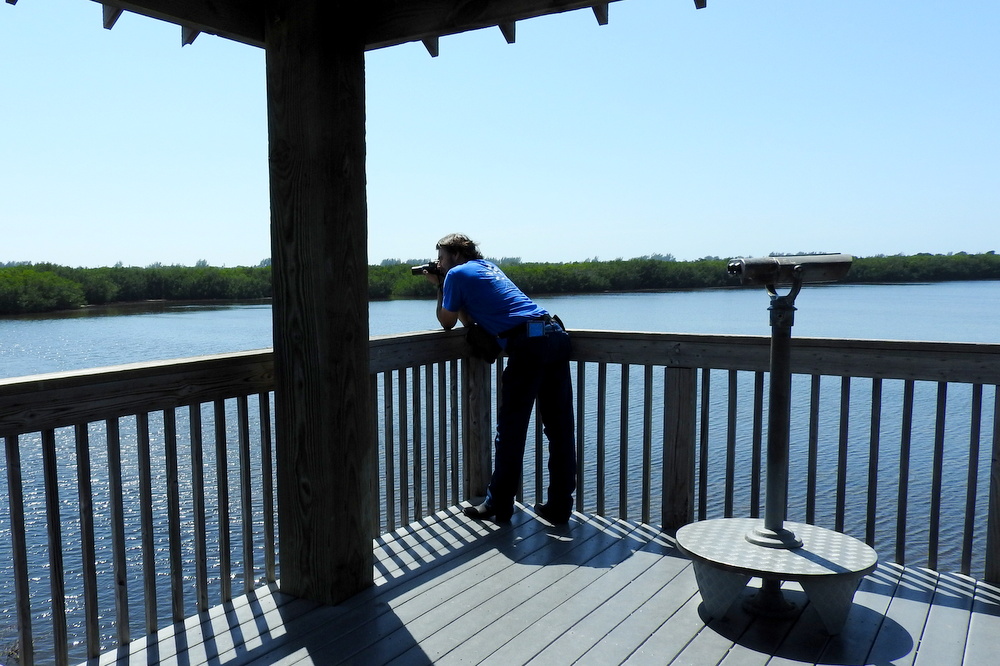 Mark on the tower

An interesting school of fish…

The thing that was so fascinating about this school of fish was their behavior.  They were packed together so tightly that the front ones were pushed to the surface where they could try to catch insects above the water.  When the front ones were finished, they’d swim around to the back of the line and a new set of fish would be pushed up.  Every once in a while we saw a fish sneak back in half way back, but most of them were very good at following the rules.  I’ve never seen fish behave this way before.

Saturday, March 19th, we got to go to another free dance at Woodland Hall after work.  This time one of our co-workers, Fran, was there with her husband.  Her husband doesn’t like to dance and she does, so I asked her if her husband would mind if Mark invited her out for a dance and she said he wouldn’t.  Mark took her out for a fast dance and he took me out for a number of dances but he pooped out before I did.  Finally I asked Fran if she’d be willing to dance with me and she said she would.  We went out for a couple fast dances.  It was fun!

Sunday, March 20th, we clocked out of work early and went to hear a fifty-four voice choir of elderly people put on a choral show.  It was pretty good.  We had actually heard them practice Battle Hymn of the Republic while Mark was dust mopping the dance floor at Woodland Hall during their rehearsal.  When they finished, Mark stood in the middle of the dance floor with his dust mop and he enthusiastically said, “You nailed it!”  When they saw us after the actual performance, several of them told Mark how much that comment had meant to them.

Today, March 21st, we drove to the VA in St Petersburg, just south of Tampa.  Mark had an upper and lower GI test scheduled for 11:00 am, but they were so busy they didn’t actually wheel him in till about 2:45 pm.  He had gone the day before eating a liquid diet so he was starved when he came out.  One of the things they did was enlarge a narrow part of his esophagus.  He has had GIRD (Gastro-Intestinal Reflux Disease) for years and has had trouble sometimes getting food to go down through his Schatz Ring.  They were able to expand that so that hopefully Mark will have an easier time swallowing.  Everything else looked pretty good.

As you can tell, we’ve been keeping ourselves busy.  It’s hard to believe we have less than four weeks left here.  We still have to finish our taxes, prepare the RV, and plan our route heading north.  All of this will keep us busy too, but I’ll try to post again before we leave.