I have been so busy of late that I haven’t had time to write about all the things I’ve been busy doing, so I’m going to remedy that now.  And because I haven’t had a working camera, the photos are courtesy of Mark.  This is a long one, but there is an offer at the end that you aren’t going to want to miss!

I should start by saying that one of the things Sarasota, FL is famous for is being the home of the Ringling family, as in The Ringling Brothers.  There has been a circus tent set up near the mall for the last couple months, and unbeknown to me, some of the circus people have been staying here at Sun N Fun.  Last week there was a free ten-minute performance outside the Wellness Center by an acrobatic group from Italy called the Pellegrini Brothers.  All I can say is, WOW!  I had no idea the human body was capable of what they did! 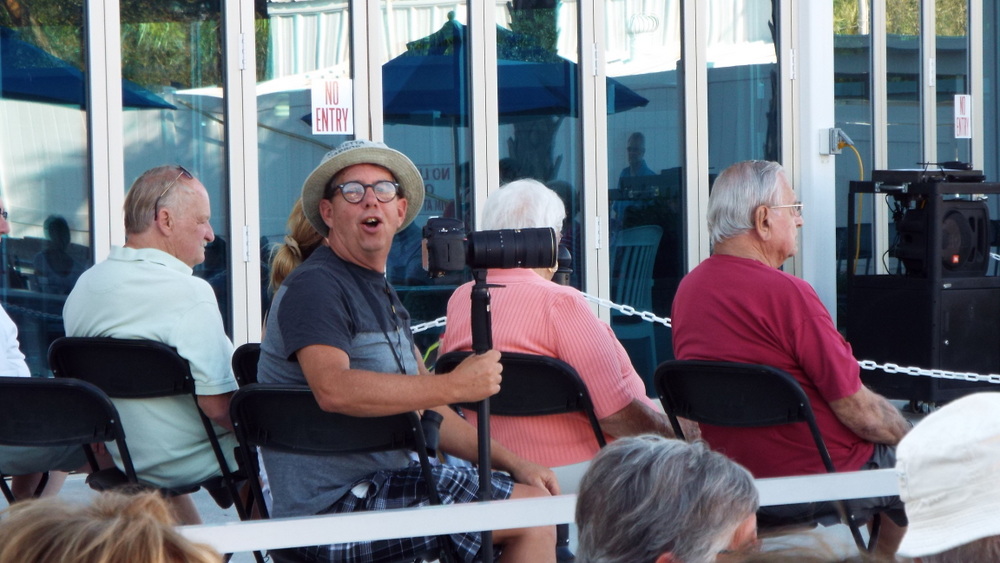 Our photo club instructor, Randy, looking for a good vantage point to “shoot” them. 😉 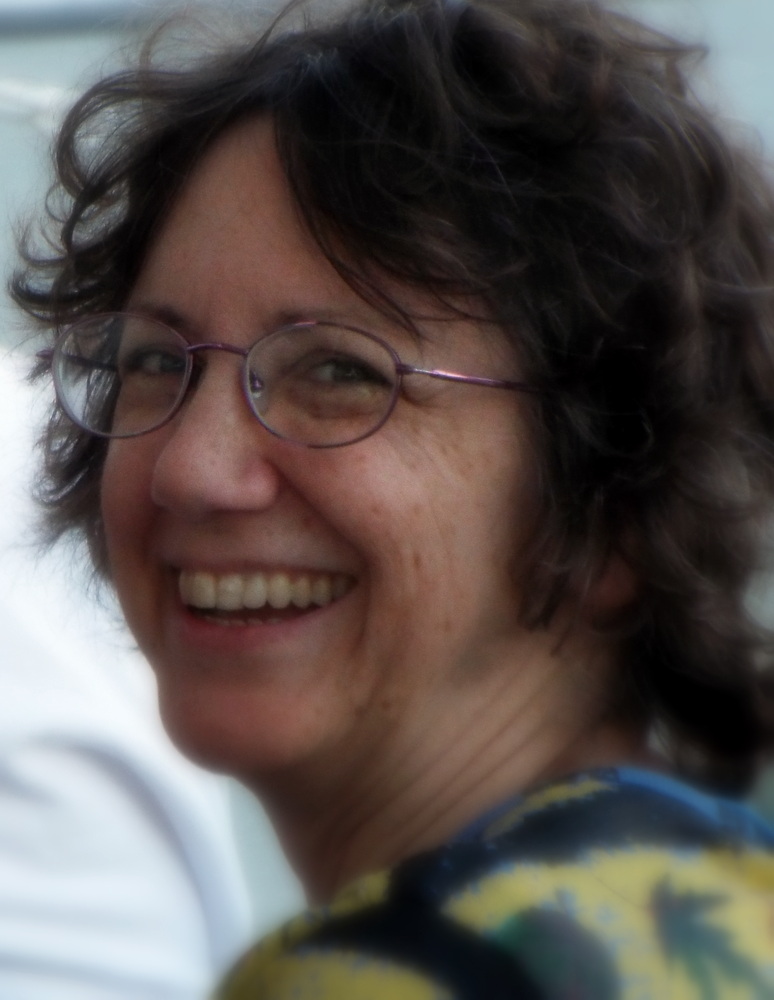 Mark was sitting on a wall behind the audience, and he caught my excitement when I turned around to catch his eye. 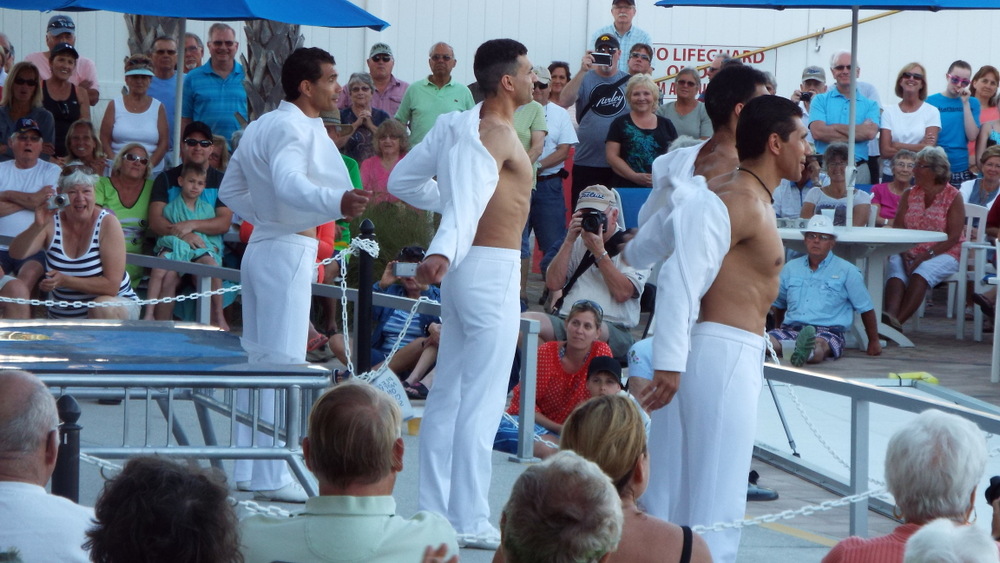 Making their grand entrance. These brothers range in age from forty to fifty, but you’d sure never know it to look at them! 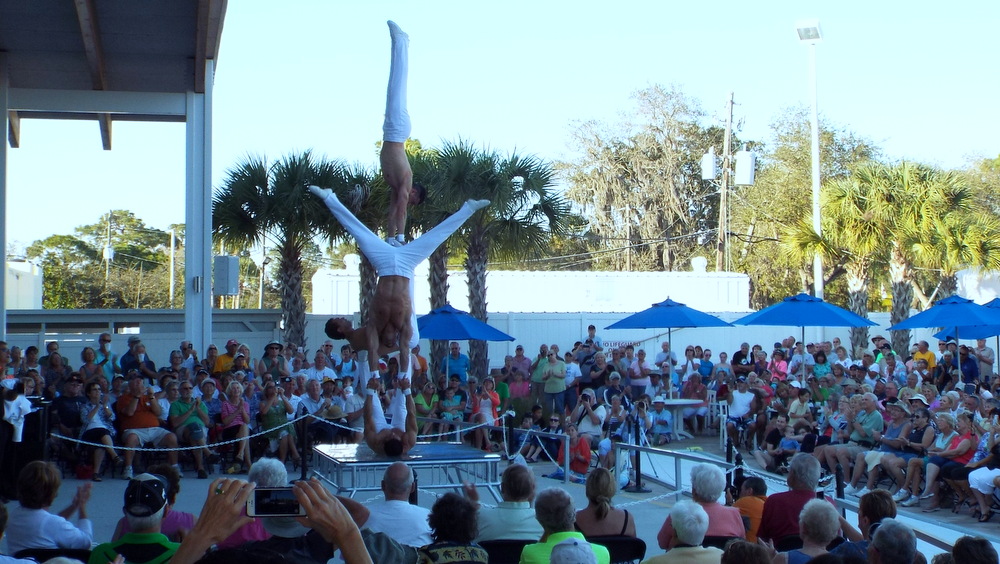 Yes, the guy on the bottom is holding all three of his brothers! 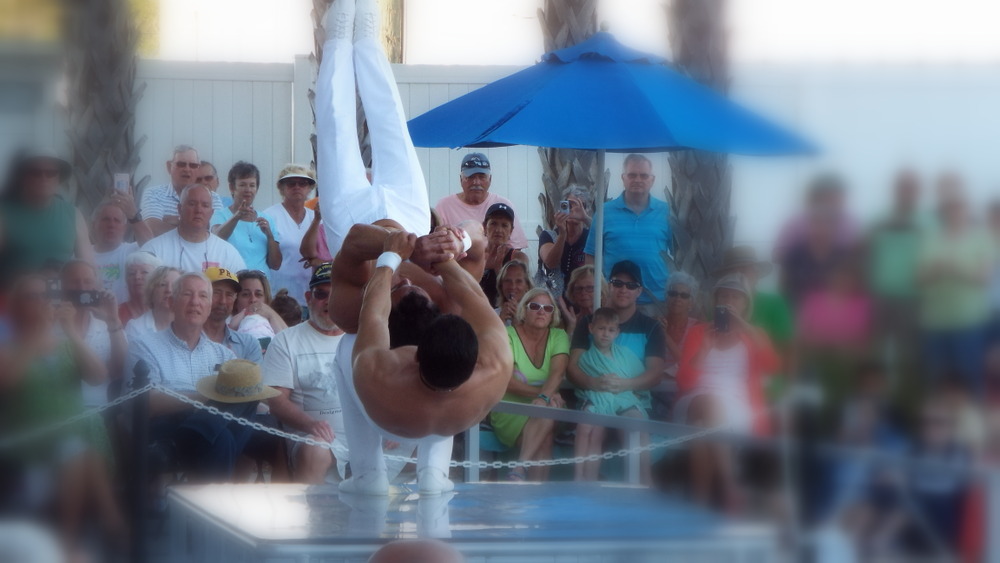 This was incredible…The closest brother was lying on the stage. His brother positioned himself on his thighs and the lower brother lifted himself off the stage with just the counterweight of his brother! 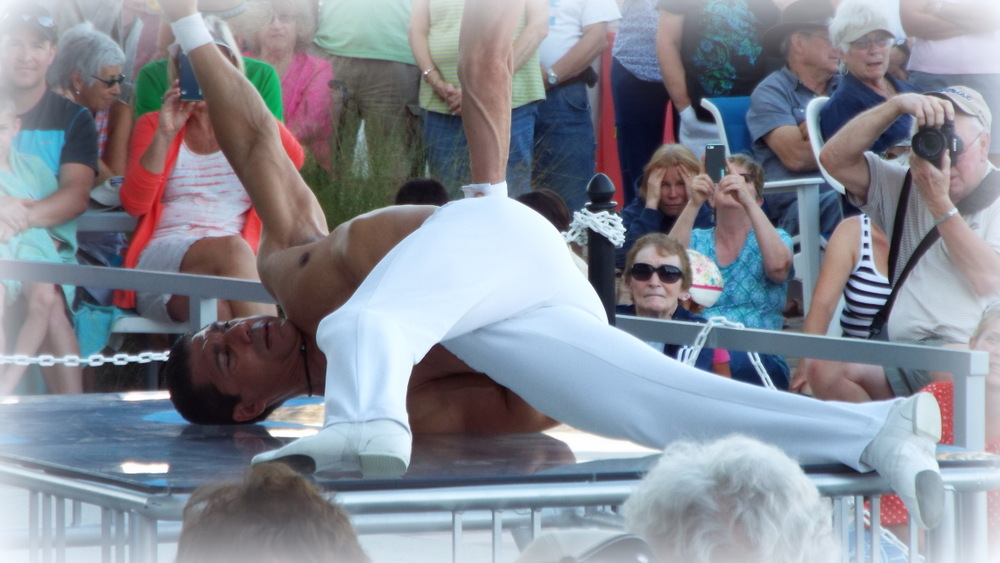 This guy started on his back on the stage, one of his brothers did a handstand on his hand, and while still holding his brother up with one hand, he turned his own body in the other direction! 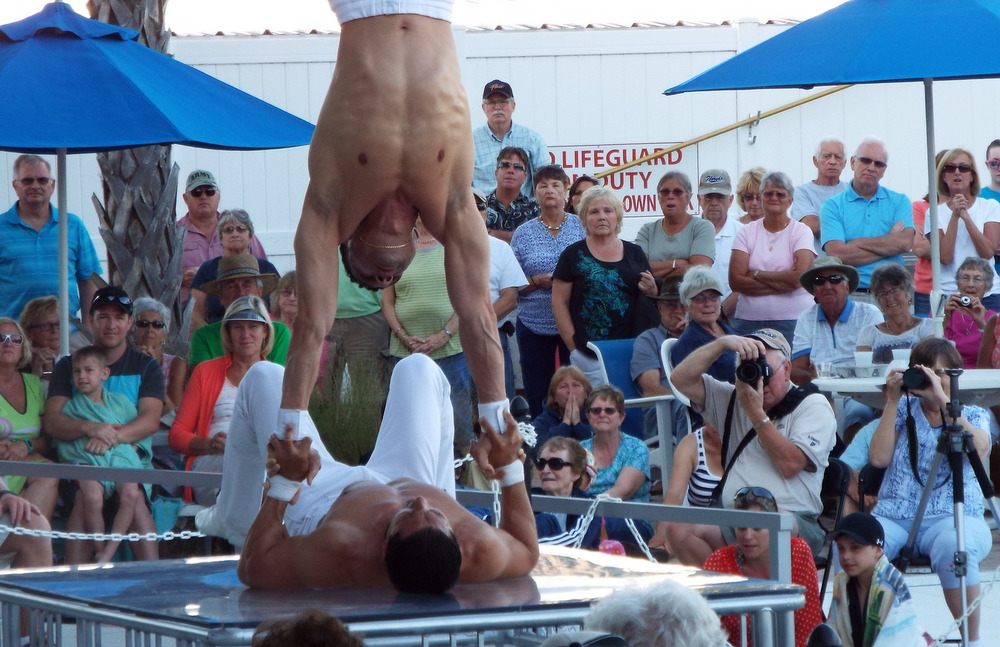 Look at those muscles! 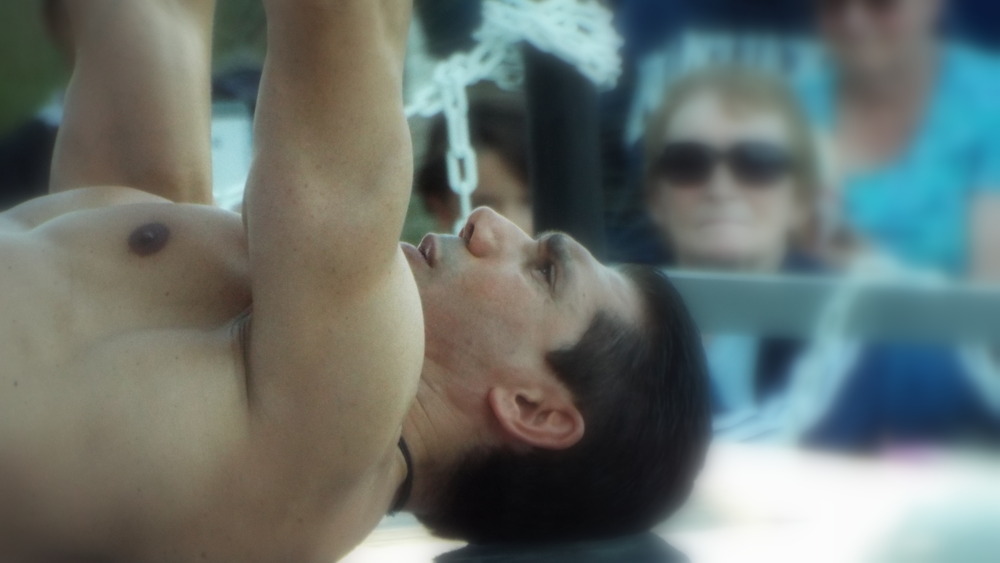 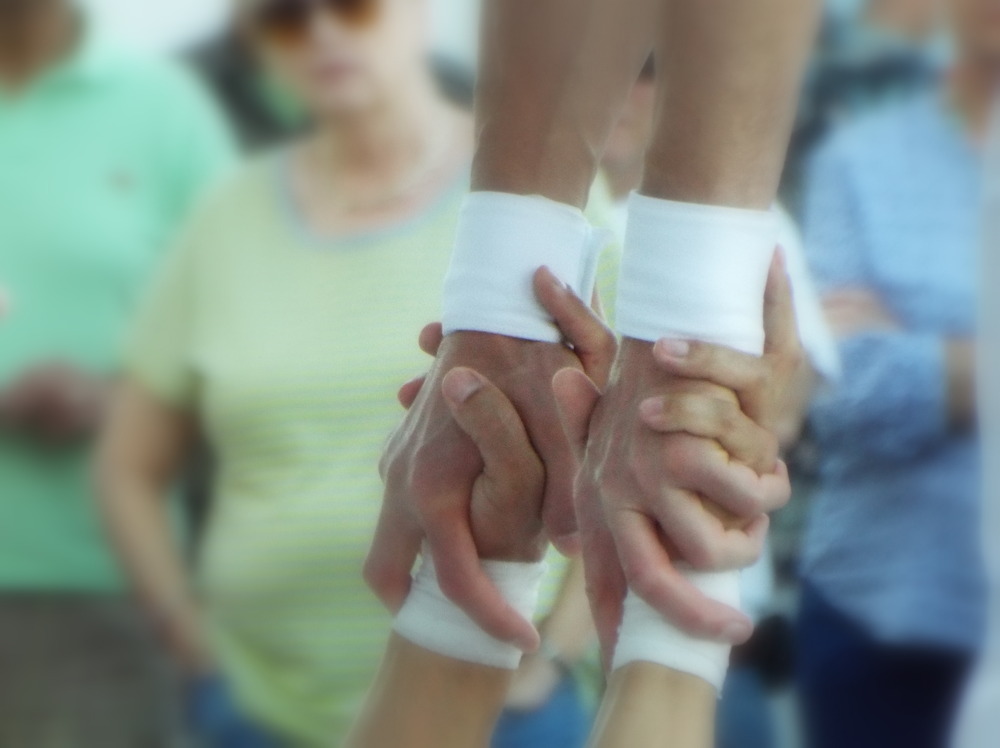 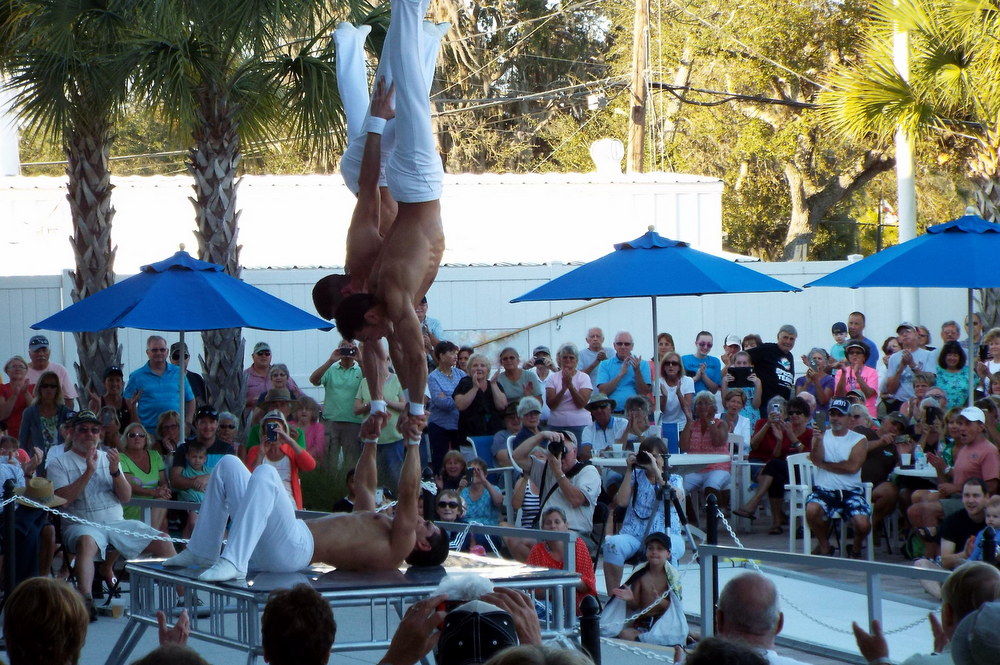 A brother on each hand! 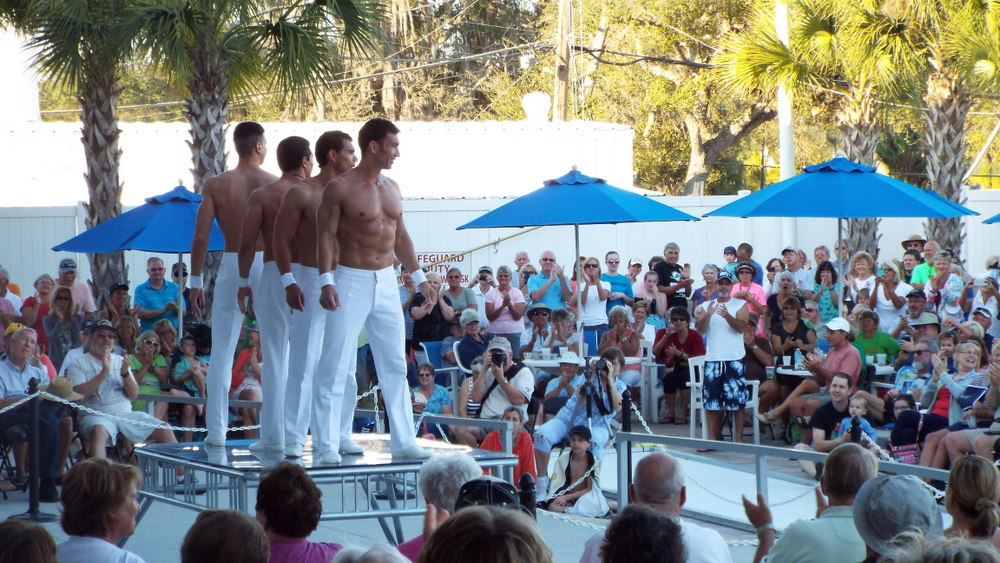 Ladies and gentlemen, let’s hear it for the Pellegrini’s!

The main thing that has been occupying my time outside of work lately is preparing for a Quilting and Sewing Open House that happened today.  Some of you may remember that last summer when we were in Door County, WI, I found a quilted wall hanging kit in a baggie in a thrift store.  I’ve been working on it ever since, and a couple nights ago I finished the last stitch on it.

This morning we arrived at the Pavilion at 8:00 and everyone in my quilting and sewing groups began arriving to get things set up for the open house, which was to begin at 10:00. 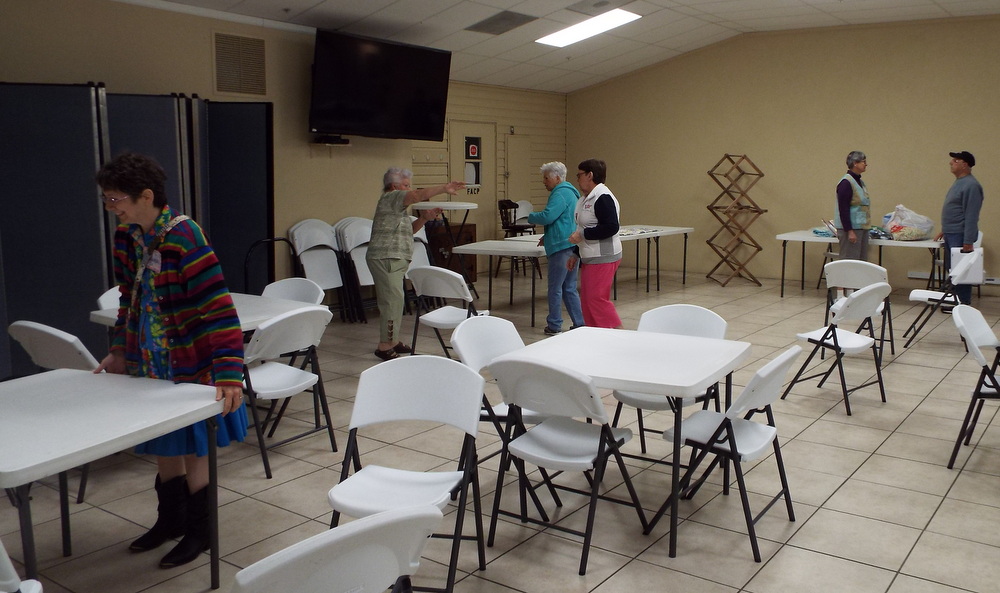 Starting to rearrange the room.  You might notice I got a haircut between the circus and the open house. 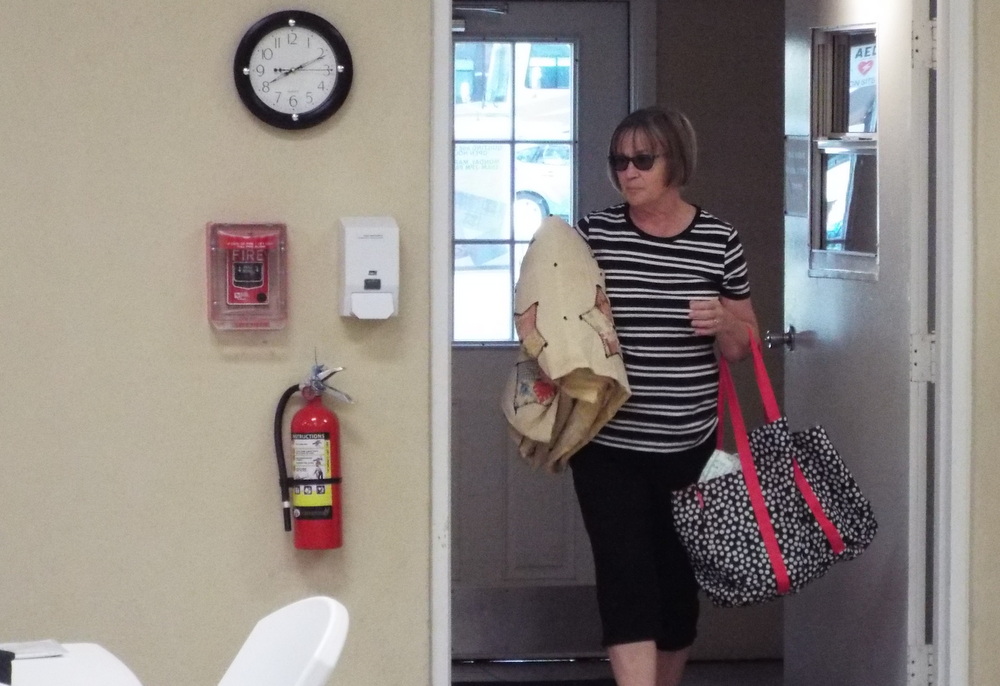 Maggie coming in looking like a movie star on a shopping spree. 😉 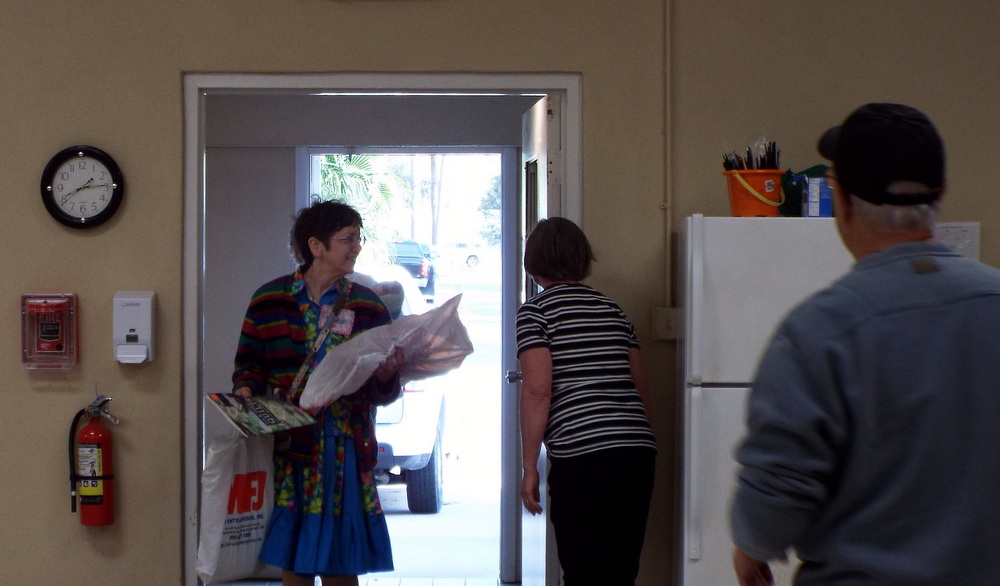 The head of our group, Penny, arrived with a carload of donations we’d all put together for raffle prizes. We helped her unload. 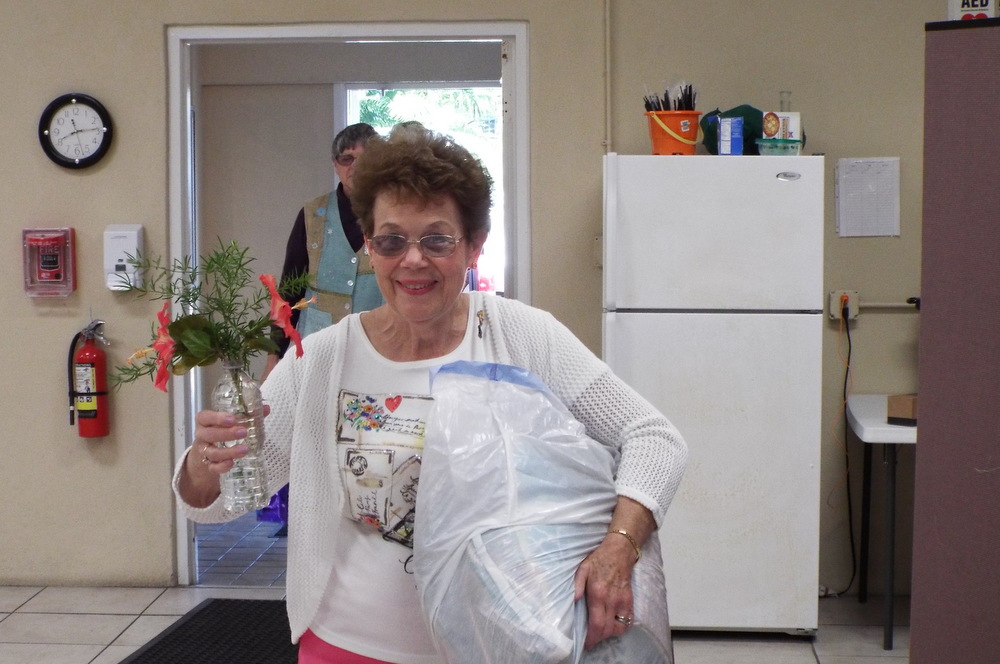 Pat carrying in the flower bouquet. 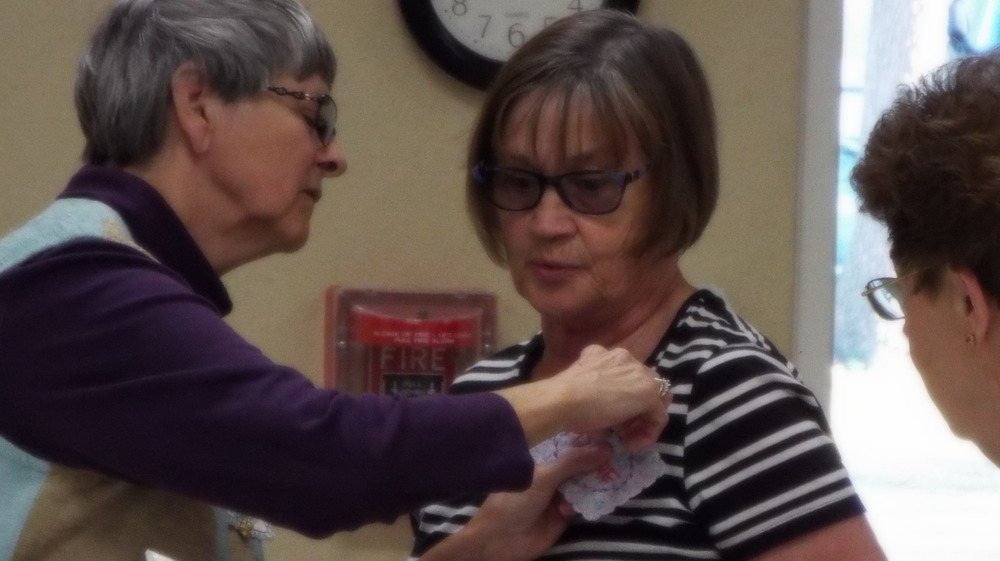 Arlene made name tags for all of us with her embroidery machine. 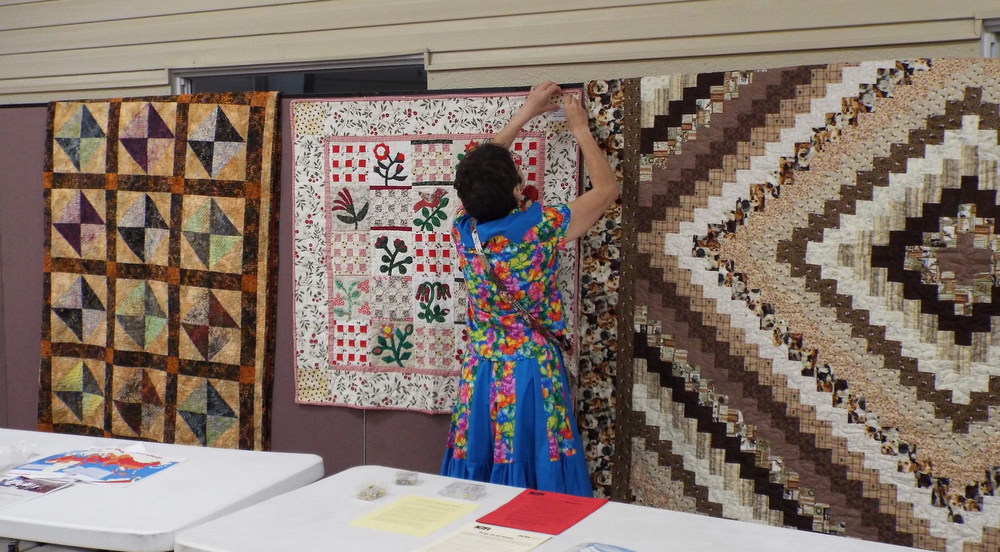 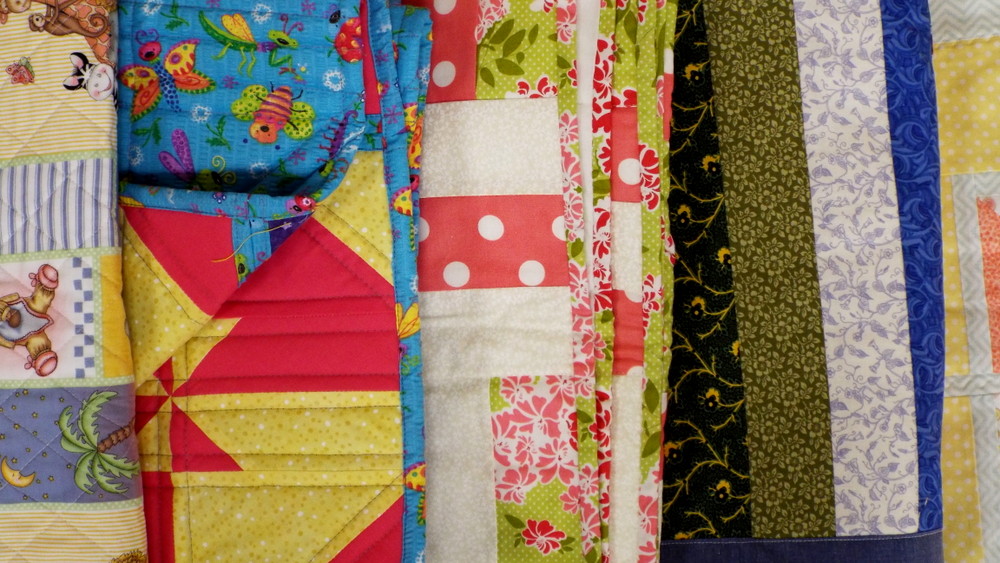 One whole corner of the room was set up to show off the various community projects the sewers work on. This was a pile of quilts for kids with cancer. 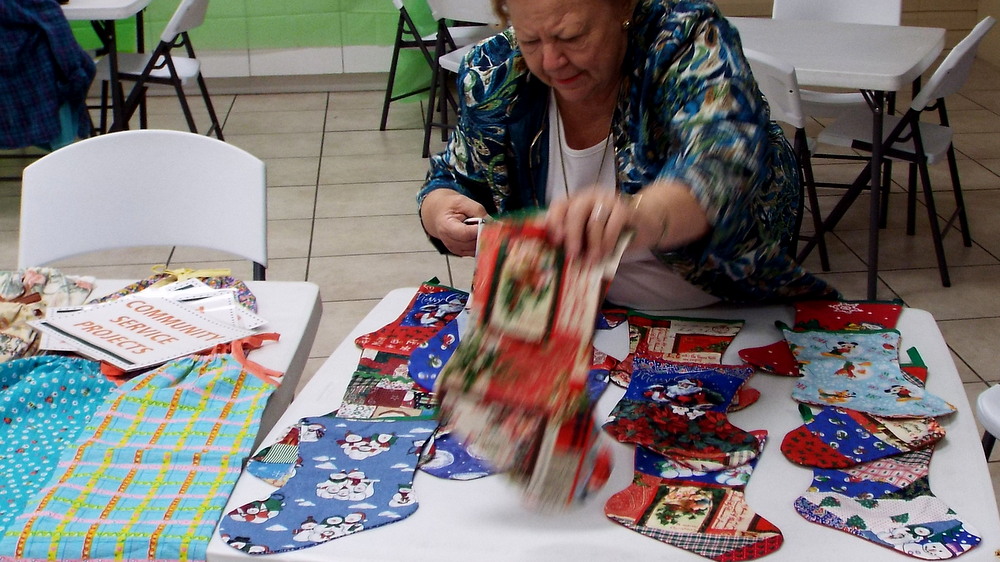 Kathy laying out the Christmas stockings for the military. One of the women takes them to her church where they fill them with things servicemen and women might want, like playing cards or toiletries or such.  On the left are dresses for girls in Africa and Haiti. 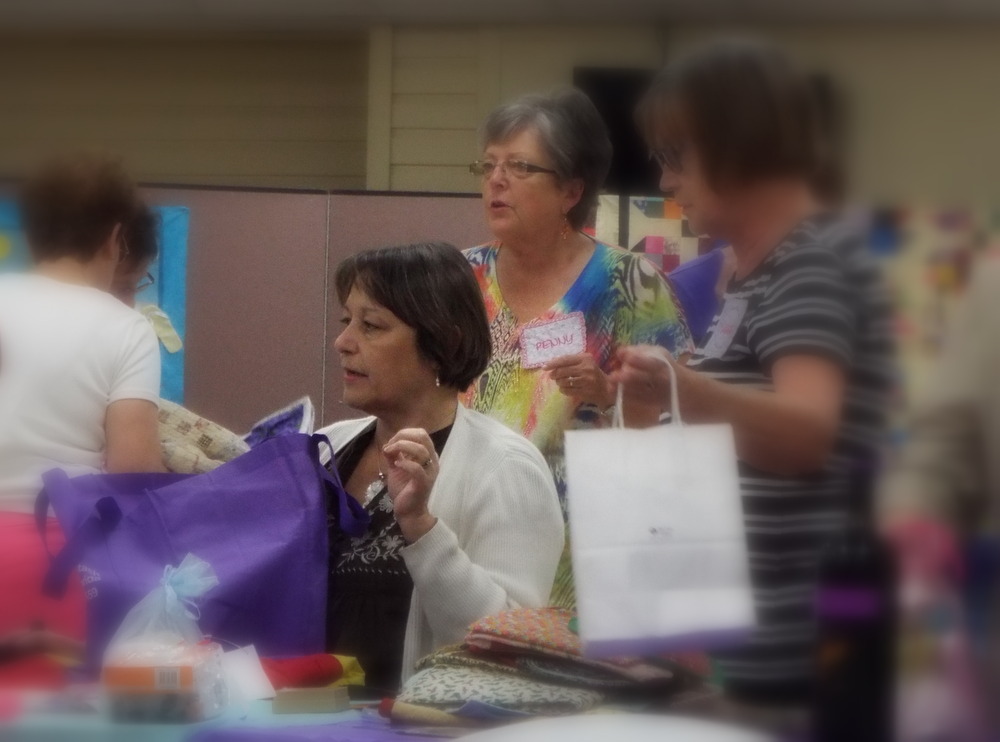 Judy has been in a wheelchair for nine years, but she maintains a very positive attitude. Not only does she sew, but she also teaches scrapbooking and sells her own handmade greeting cards.  Behind her is our fearless leader, Penny. 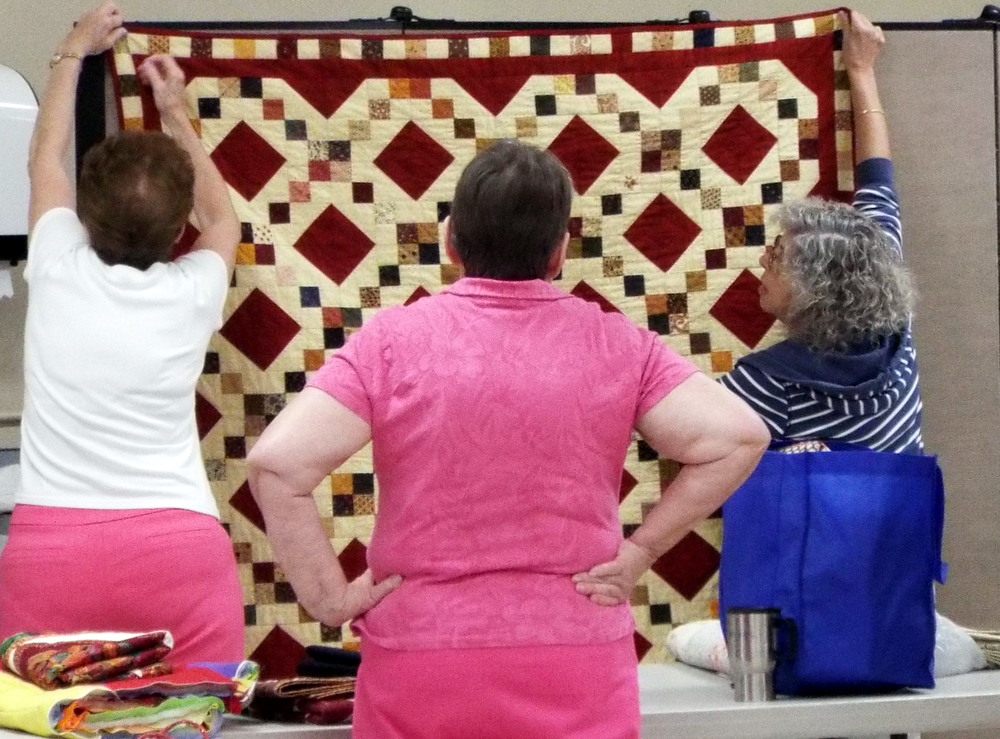 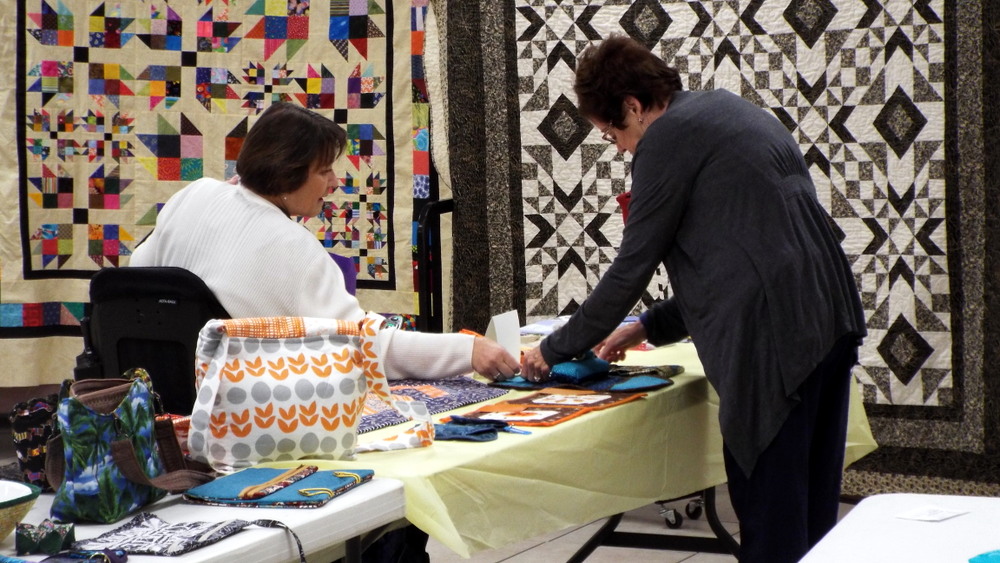 Judy and June laying out a table. 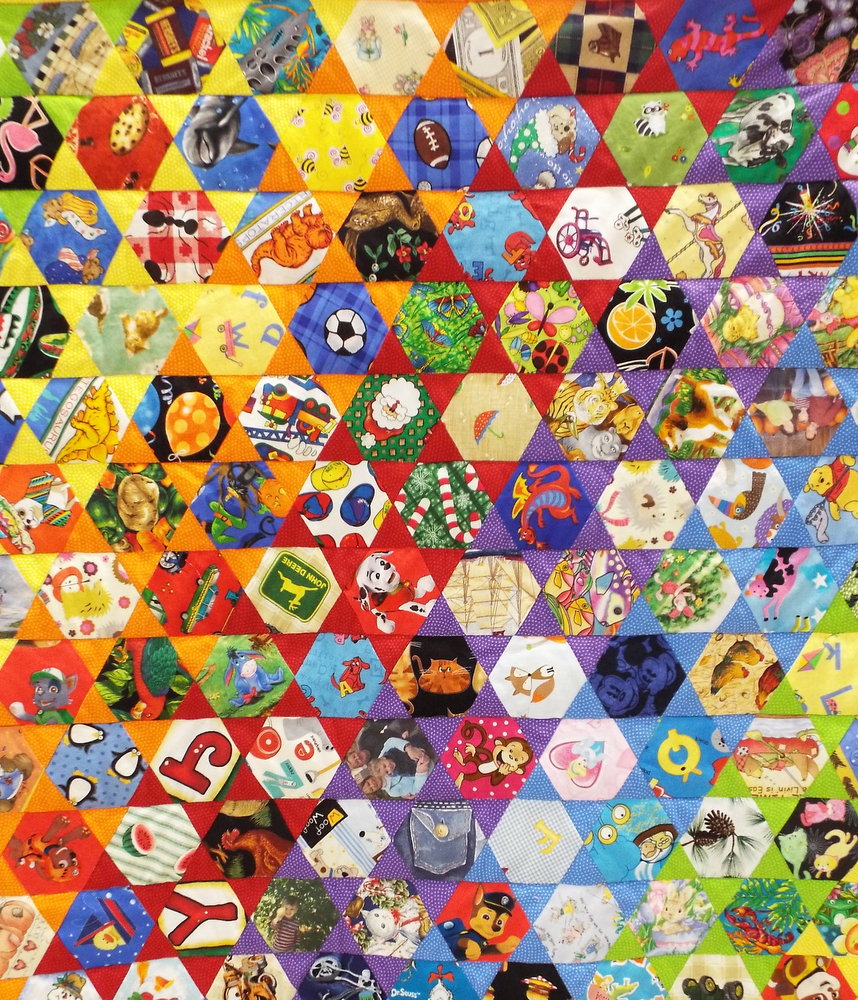 Judy made this “I spy” quilt for her grandson. It’s a game. She can say, “I spy with my little eye a soccer ball,” and her grandson will look for it on the quilt. 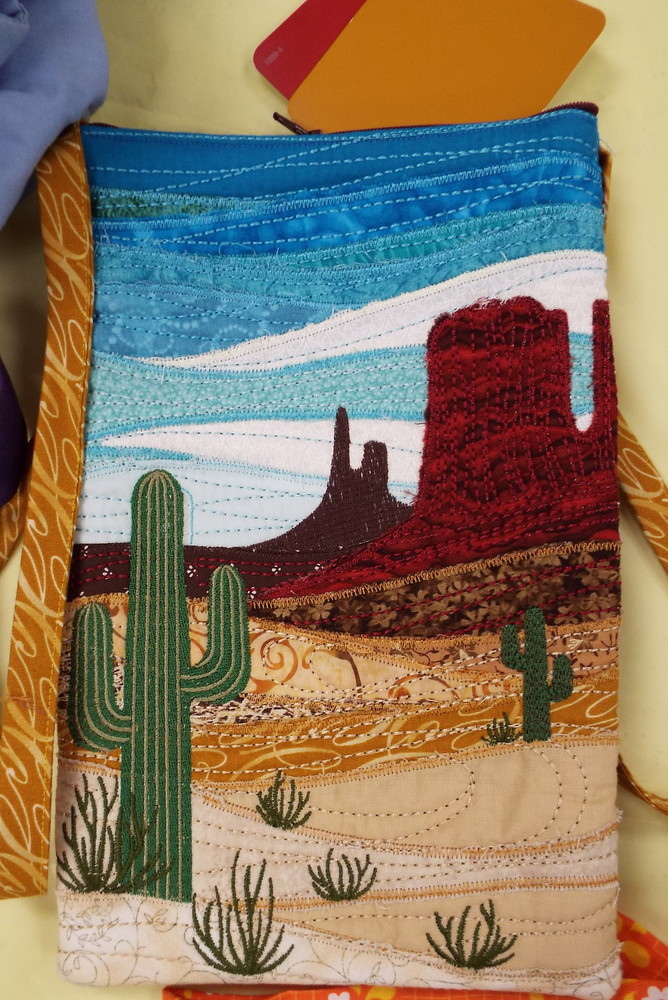 This was a paint chip challenge. Last year everyone picked two paint chips without seeing what colors they were, and they had to make something with those colors. You can see the paint chips for this one at the top. 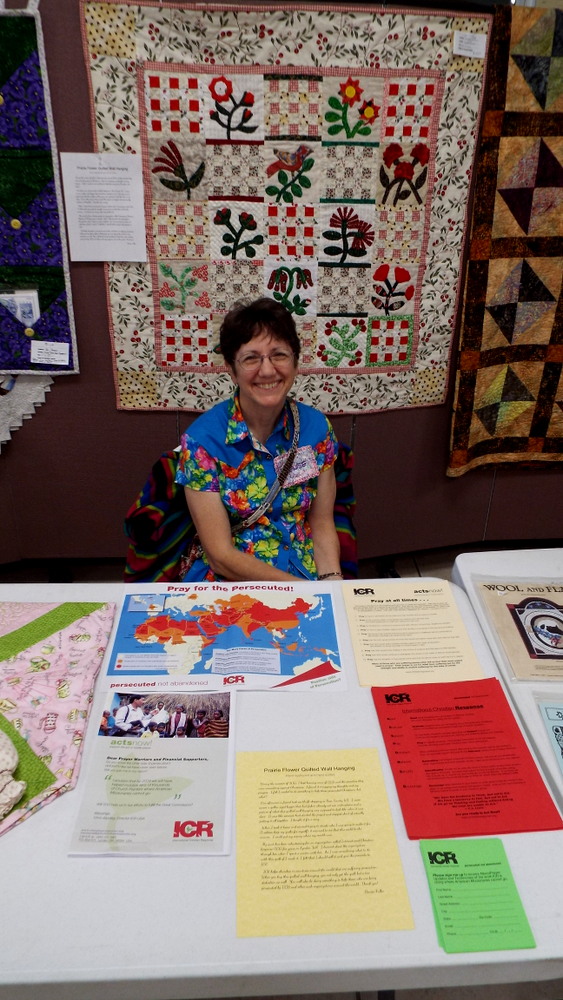 Me trying to get people’s attention.

So here is the story of my quilt:  I had a price tag on it for $305.00, and no one bought it.  It’s all hand appliqued and hand quilted, but that’s not the reason I priced it as I did.  That’s the amount I was hoping to raise for International Christian Response (ICR), an organization that my Aunt Marg volunteers for that helps persecuted Christians around the world.  I had started this quilt last summer when there was all the news about the atrocities ISIS was committing against Christians.  This was my way of trying to do something to help so I wouldn’t feel so impotent against evil.

Since my quilt didn’t sell at the open house, I’m asking my readers:  Would anyone like to buy this Prairie Flower wall hanging?  If so, you could make a check out to ICR-USA and send it to me.  Once I have it, I’ll send you the quilt and I’ll forward the check to ICR.  They will send you a receipt for the check which you can use at tax time next year.  This offer is good through this coming weekend.  Let me know by email if you are buying the quilt so that I can let anyone else who expresses an interest know that it is taken.  Now, don’t you all fight over it!  😉

1 thought on “The circus and the open house”