Last week was an exciting week because I started my new job as a docent at the Alexander Noble house in Fish Creek.  I haven’t written much since I was hired because I had a lot of research and learning to do. 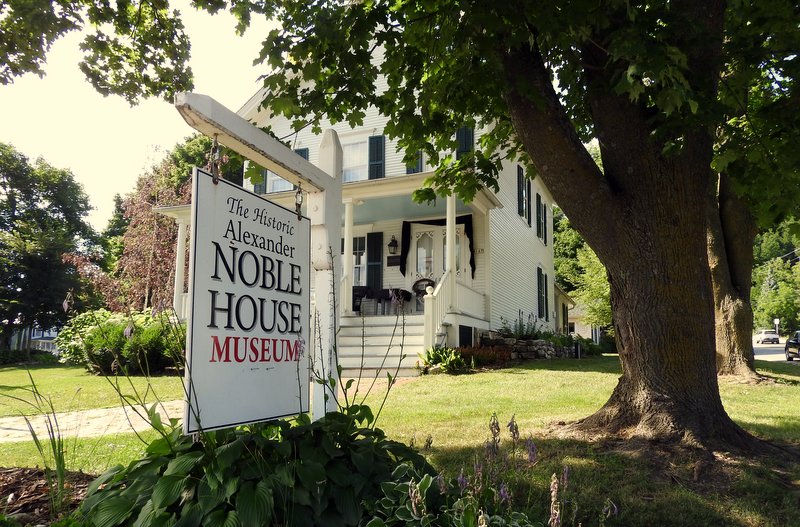 Every year, the museum features a different aspect of history.  This year, the focus is on Victorian funerals, so I go to work dressed in black.  Not only did I have to learn about the house, but I did extensive research on Victorian funerals.  The first tour I gave last Wednesday, I had a handful of cards with notes.  Two cards into my talk, I abandoned the cards and have not used them since.  In fact, I am going to have to whittle down my talk! 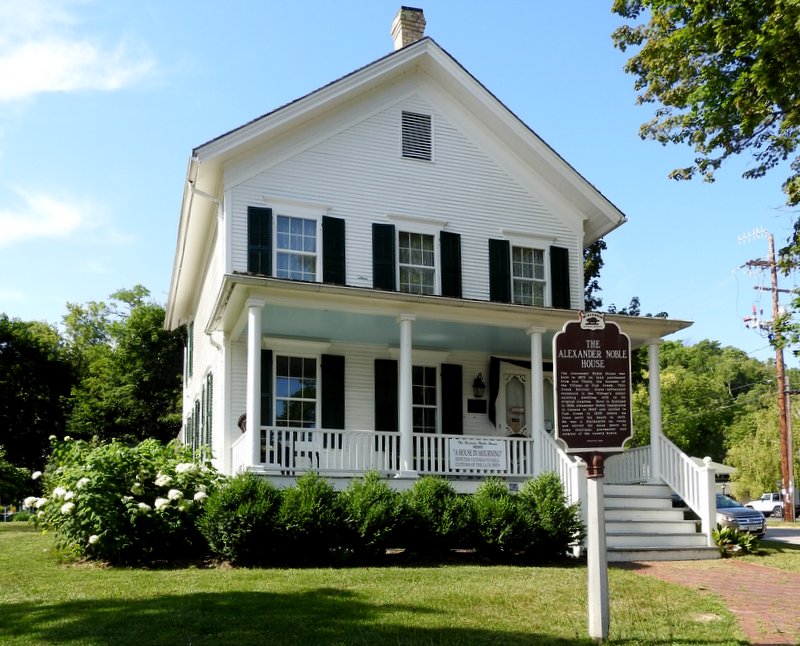 The house was built in 1875 and was the first wood frame house in Fish Creek.

To give a brief history, Alexander Noble was born in Scotland in 1829.  His family emigrated to Canada when he was eight years old.  As a young man, Alexander moved to New York and became a US citizen.  He learned the blacksmithing trade and married his first wife, Emily Vaughn, in New York.  They had a daughter while in New York whom they named Ula.  When she was young, they moved to Chambers Island which is located in the bay of Green Bay offshore from Fish Creek.  Fish Creek was considered to be too wild for the young family to inhabit, and Alexander made a living running a saw mill on the island.  There is some disparity in the two children that followed Ula, but at least Alexander’s granddaughter says that Emily became pregnant with twin boys and decided she wanted to live on the mainland.

Alexander got a 300 acre land grant from Abraham Lincoln in Fish Creek.  The property had a log cabin on it, so the family moved in there.  Alexander had a farm with a barn and various animals, so this was his third career, but he also began blacksmithing again.  In 1873, Emily died, and in 1874, the log cabin burned to the ground.  There were very few things they were able to save from the fire.  In 1875, Ula drew up a floor plan for the current house and they moved in when Ula was 22 years old.  She became the lady of the house and was responsible for keeping house and taking care of her younger siblings.  She admitted in a couple letters that she wasn’t much of a housekeeper.  She wasn’t a good cook, and she couldn’t starch her father’s shirts right.  Several months after they moved into the house, Alexander married a school teacher named Maria Campbell and she moved in and took over the household responsibilities.  Ula left at that point to become a school teacher in Baileys Harbor.  She never married.

Alexander and Maria went on to have four more children; two girls and two boys.  One of the girls was named Nellie and when she grew up, she married a man from Chicago named Donnell Howe.  They had a daughter and a son.  The daughter’s name was Gertrude Howe, and when she grew up, she went to the University of Illinois Medical School and graduated in 1940 as a pediatrician.  Her brother became a surgeon, so the family always said of her, “She’s just a baby doctor.”  After graduation, she set up her first practice in Michigan.  After Alexander and Maria died, the family used the house as a summer home until Nellie’s husband died.  Then Nellie moved into the house for the remainder of her life, and Gertrude moved in with her.

Gertrude had a lot of spunk!  Working for the American Red Cross, she bought a plane and piloted it all around Wisconsin giving out the newly developed polio vaccine and promoting the practice of pediatrics.  At home, she hung her shingle outside the house and a lot of the elders of Fish Creek remembered being treated by her.

Nellie died in 1962 and Gertrude became the last Noble descendant to live in the Noble house.  In 1990, she was taken to a retirement home and the house was boarded up.  She died in 1995, and in 1996, the Gibraltar Historical Society acquired the house.  When they entered the house for the first time, everything was left as it had been on the day Gertrude was taken to the nursing home. 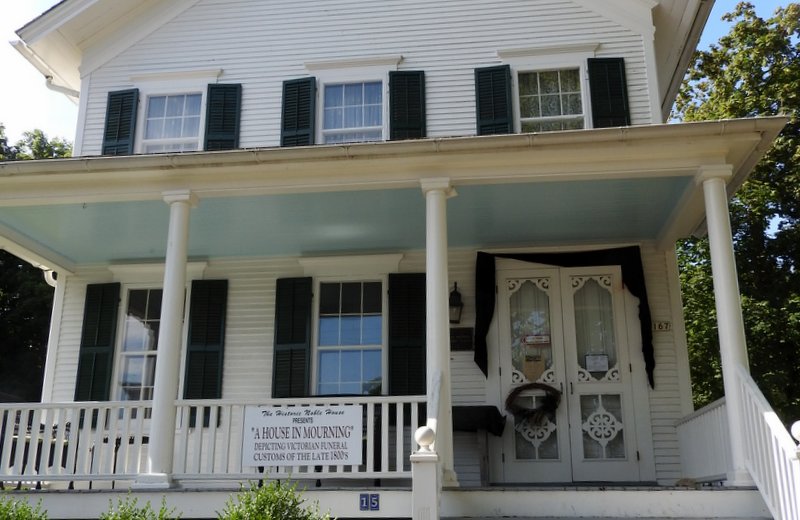 A house in mourning

In the above picture, you can see the mourning wreath hanging on the front door and the black cloth draped over it.  There are also black curtains covering the windows and a sign on the door declaring that this is a house in mourning, as if there were any question about it.  Other than that, I’m not going to tell you about the various mourning customs of the day.  You’ll just have to come and see for yourself!  I will say that that part of the tour is much more intriguing than the part I just told you.

You can see why I need to whittle down my talk.  I know so much more that I could tell, but it’s only supposed to be a twenty minute tour.  I am thoroughly enjoying this job and have gotten a lot of kudos from the visitors and from my boss.  I work Wednesdays and Fridays from 10:00 to 3:00, so if you’re in the area, stop by for the tour!