I have had two full days and I’m staying up way past midnight tonight to write about them so I don’t get even farther behind!

Yesterday Mark and I went into Houston and spent the entire day at the Johnson Space Center.  It was a little bit like the OMSI in Portland, OR with things for all ages.  But the parts that had to do with the NASA space program were of the most interest to us.  We’ve lived through some of these events. 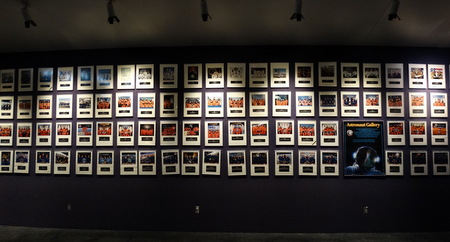 We saw a movie about the space program from the beginning to the future.  I was moved to see the reactions of the people in the control center when the rocket with Christa McAuliffe blew up in 1986.  I remember that incident very well.  Jamey was two years old and he had just finished breakfast in his high chair.  We had the television on to watch the launch because so much excitement had been built up around the fact that they were going to send a school teacher up.  When it first exploded I thought that was just the first stage rocket falling off and I said, “Oh, look Jamey!”  Then the reporters started indicating they didn’t know what had happened and things got somber quickly after that.  Maybe it was that early experience that got Jamey interested in being involved with the Portland State Aeronautics Society, working on the computerized parts of their rocket launches.

They showed astronauts hopping around on the moon’s surface, skiing down crater slopes and even playing golf!  One astronaut wrote about the experience in a book and said that from the moon, earth looked like a fragile Christmas ornament and he wanted to protect it.  I wish every single human alive could get that perspective on earth.  Maybe then we’d all do better at taking care of the earth and each other. 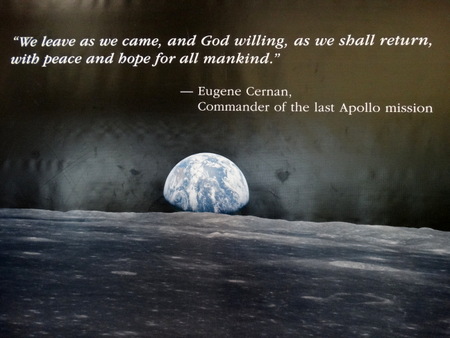 There was a scene in the movie when they showed an astronaut going out the door for a space walk.  You could see the earth far below.  There was a little girl sitting on the other side of Mark and she said, “Don’t jump!”  I reached across Mark and touched her arm and said, “Don’t worry.  He’s just going out for a walk.”  She sure was relieved to hear that!

When the theater doors opened, we walked out into a museum about some of the things we’d seen in the movie.  The tour was led by a guy who said he was the only artist astronaut.  He said he’d contributed one of his paintings to this visitor center.  I believed him, but Mark said he wasn’t old enough to have been that astronaut.  Oh well, I had my picture taken with him anyway! 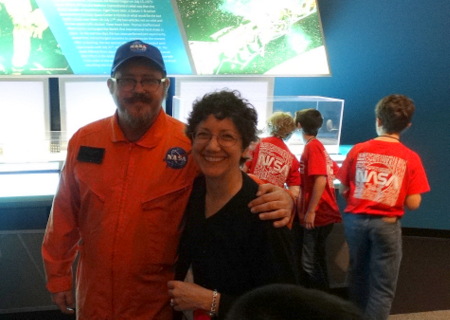 I got to touch a piece of a moon rock.  It has turned black from oxidization and shiny from everyone touching it, but I guess it’s the only piece of a moon rock the public can touch.  In fact, when they first sent astronauts to the moon, they placed them in quarantine for several weeks after they returned to earth for fear they might have brought back some strange moon bacteria or something.  After several such missions, they finally decided that wasn’t necessary. 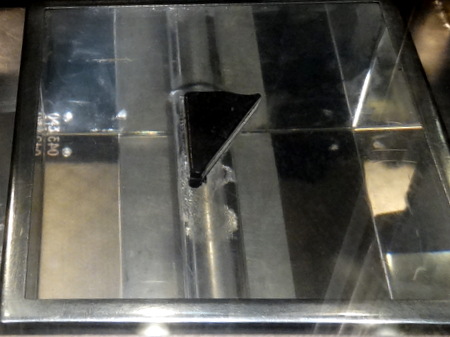 A little piece of the moon!

When we left that tour, Mark and I lined up for a tram tour of the grounds.  There were two highlights from this tour: 1) We got to see a real control room.  The only reason we got to see it was because they are still in the process of setting it up for the next group of rockets called Orion.  They expect that in twenty years they’ll be able to put an astronaut on Mars.  2) We got to see the Saturn V.  It has it’s own building where they are trying to restore it after it had been outside for years and deteriorated.  It’s huge!  It took a while to walk from one end to the other.  I took a picture of Mark in front of one of the five thrusters on the end of the first stage of the rocket just to give some idea of the size of it.  Then I took pictures of each section pointing toward the end where we started.  It was mind-boggling! 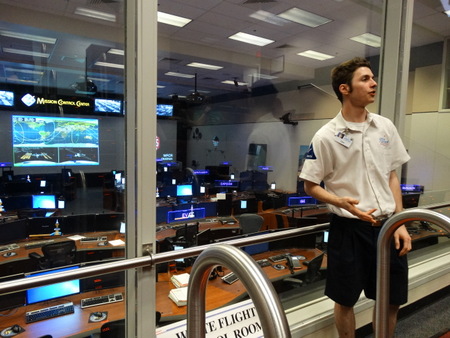 The NASA control center for the Orion series…You saw it here first! 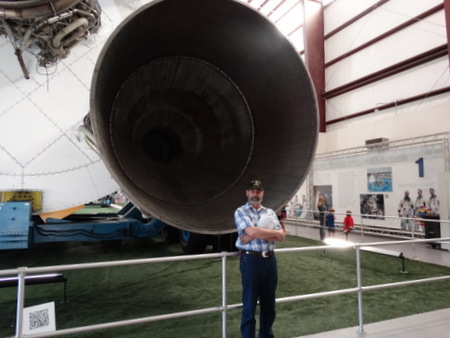 Just one of five thrusters on the first stage of Saturn V! 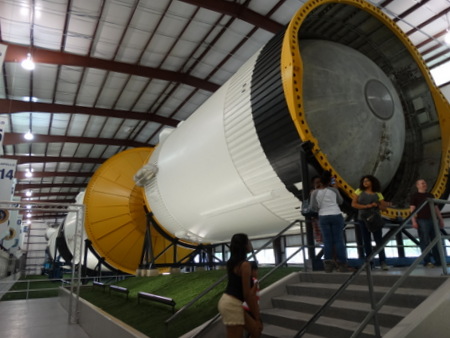 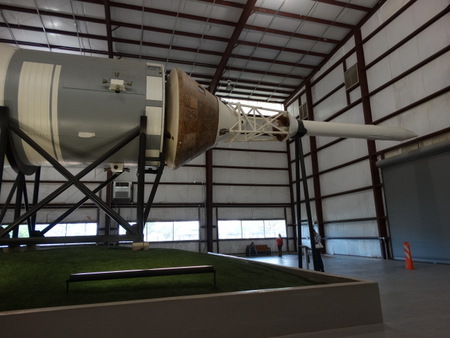 …And the top sections of Saturn V

So that was yesterday.  This morning Mark and I got up and walked on the beach one last time before setting off to our next destination.  At one point I saw a group of people walking or exploring ahead of us and there were all these birds flying around them.  As we got closer I saw that actually they were all flying around one woman and I was about to say, “It looks like the birds like you” when I saw why they were so interested in her.  She had a bag of bread crumbs that she was throwing up in the air as she walked.  It was fun to see.  This time I got some close-ups of the different types of seagulls there. 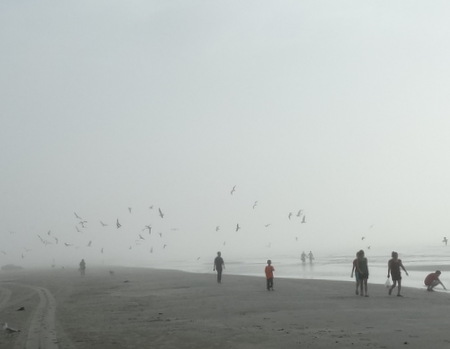 The bird lady coming toward us on the far left

The shoreline is covered with bits and pieces of shells and rocks.  I collected several to remember Galveston by.  Then we loaded up and left Texas.  We’ve been in Texas since early November so it’s kind of exciting to leave and see new places again. 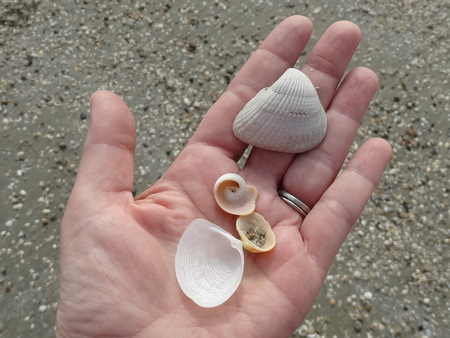 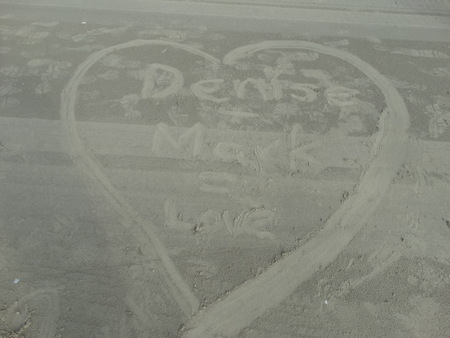 We left our mark in the sand!

We crossed over into Louisiana and I got a picture of Lake Charles.  That was about the most interesting thing I saw on the road today, but when we got checked into the KOA in Scott (near Lafayette), one of the women in the office told us there was going to be some local people playing music tonight.  Mark and I went looking for them, not knowing exactly where they were.  Finally we saw a woman leaving a house with a guitar case in her hand.  Mark stopped and asked her where the music was and she pointed back toward the house and said, “In there.  It’s real good.  There’s a high school kid playing fiddle tonight.  Y’all go on in and enjoy it!” 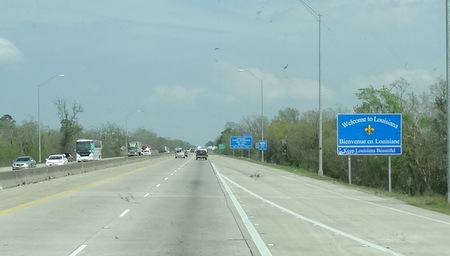 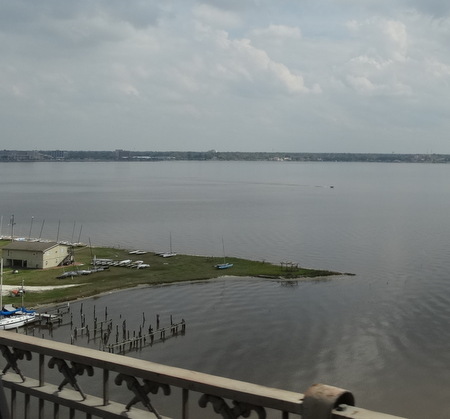 What looked like a house on the outside was actually some sort of visitor center/historical society for Scott.  A woman on the porch told us to go ahead on in and enjoy ourselves.  We walked into what would have been the living room but was actually a gift shop.  The floors were weathered boards.  We rounded the corner into what was apparently a kitchen and dining room area, but other than the appliances along one wall, the room had no furniture other than a circle of folding chairs.  There were six old men and a young man sitting up front.  There were three guitars, a harmonica, a small accordion, the young man’s fiddle, and off to the side of the audience was a man chiming in every so often with a triangle.  They were amateurs; just a bunch of guys who like to get together once a week and play zydeco.  The young man with the fiddle was apparently new, but he was very good.  He could even sing and speak in Cajun French.

Someone moved to another chair so Mark and I could sit together up front.  The music had a 1-2-3 beat to it and it kept our toes tapping.  In between songs, one of the guys would tell stories.  He told about once seeing a man in a bar run for the bathroom.  There was a women’s door on one side and a men’s door on the other, but this man hit the wall smack dab in between them!  He also told a joke about a man telling a neighbor of his that he’d been playing around with his wife for years.  The neighbor said, “Good!  Then we’re even!”  The story teller said he was trying to clean up his stories for Lent.  lol

Towards the end, people around us started asking us where we are from.  I told the woman next to me that we are headed to Natchitoches in a few days, and she said, “You mean Nakadoche” or something like that.  I will need to work on my Louisiana pronunciations!  Anyway, she told me that when we’re there, we should ask around for meat pie.  Apparently that’s a specialty up there.  Then she told me where else in town we can find good music.  They had even invited us to get up and dance to the music if we wanted, but we don’t know how to dance to Zydeco, so we declined.  They were all very welcoming and I felt like we had been accepted into the family.  It was a very cozy environment.  I still have lively music playing in my head.  I didn’t take my camera because I wasn’t sure what we were getting into, but suffice it to say, I had a lot of fun tonight.