This morning we set the alarm and got up early for a day of touring.  The LDS church provides a free shuttle that stops at the airport and at our KOA and picks people up to take them to Temple Square for however long they want.  We went into the KOA office a little before 9:00 and asked them to call the shuttle, and in less than ten minutes it was here.  The driver was a really nice elderly man who was a little hard of hearing.

We were glad to have him do the driving because he was more familiar with the roads than us, and besides, there’s a place designated for his van to park whereas we would have had to find (and perhaps pay for) parking.  He dropped us off at the west gate around 9:15 and said he’d be back for us at 3:00.  We walked through the gate and entered another world.

The first thing we did was go into the north visitor center and ask for a tour.  A few minutes later we had two female elders – one from Venezuela and the other from California – showing us around.  They quickly determined that I am not a member, so they kind of geared the tour to me.  There was a display of the prophets from Bible times, then from Joseph Smith’s time, and finally of the current prophet, Thomas S. Monson.

Then they took us to another floor where they have a large statue of Jesus with a celestial backdrop behind Him.  They took a picture of Mark and me standing in front of it.  That was something I had particularly looked forward to doing on this tour because Mark has pictures of his former family in front of it and I guess I wanted to be included.

The next stop was the Mormon Tabernacle.  It will only hold 4,000 people so they more recently built a conference center that will hold something like 12,000 people in it, but the choir still practices and performs in the Tabernacle.  We were seated near the back on the right side.  As part of the tour, a woman went up to the podium and spoke to us without the use of a microphone.  She tore a piece of newspaper and then crumpled it up and we could hear everything.  She turned around with her back to us and we could still hear her.  Then she dropped three pins and a small nail, and we could hear them all.  The acoustics in that building are phenomenal!

For the last part of our tour, our guides took us to the south visitors center where there is a working model of the temple since most people aren’t worthy to go into the actual temple.  Having once built a dollhouse and trying to wire it for lights, I was perhaps more interested in how they built the model than I was in what the rooms were for.  I made one faux pas when I asked if they kept cows in the basement of the temple because they had a bunch of them in the model holding a baptismal font, but they smiled benevalently and told me those were statues representing the twelve tribes of Israel.  The whole thing was a model, so how was I to know those were statues and not representations of real cows?  Mark said he almost laughed when I asked.

After our tour, Mark and I were both hungry so we went to a café in the Joseph Smith Memorial building.  After lunch, we found the Family History Center, which is what I was really dying to get into.  I had brought all my family history stuff with me.  I was there so long that three different people came to help me navigate my way around the website.  I learned things about FamilySearch.org that I’m not sure Frances and Sue in Gore, OK knew.  I even found a whole article on Westcote manor and the surrounding parish.  I found out that one and a half hides (which I take to be the equivalent of an acre) had once been granted to the Knights Templar.  The Westcott line of my family gets more and more interesting!

While I spent several hours researching and learning how to maneuver around the web site, Mark went out and took pictures around Temple Square.  He enjoyed himself too.  Just as we were leaving he told me he had tried to get back into the Tabernacle to take a picture of the huge pipes of the organ but that the doors had been locked.  As we walked past we saw someone go in, so he quickly ducked in and got his picture.

By the time we got out to the west gate we found our shuttle waiting for us.  The driver said he’d just picked up a couple of women from the airport who had an hour layover at the airport and wanted to come and see Temple Square.  He said that when he finished dropping us off at KOA, he’d go back and pick them up to take them to the airport.  It hadn’t occurred to me that people would spend so short a time there.  As it was, Mark and I didn’t see half of what there was to see there.

As soon as we got back to KOA, we got in our car and made a second attempt to find Mark’s brother’s cemetery.  This time Mark had done his research and knew generally where he was going.  We need to remember that it’s on 4100 S. and that Bruce’s grave is straight out from the first deciduous tree after the two pines.  There is a new grave stone there since the last time we visited together.  Mark’s mother is now buried next to Bruce.  On the other side is his maternal grandparent’s head stone.  So it was Mark’s chance to visit four of his family members who have passed on.

Here are some pictures from our day:

Looking at the map before the tour 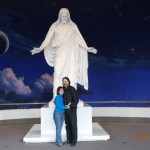 Under the statue of Christ 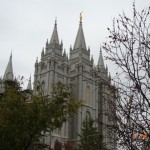 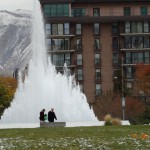 A fountain with the mountains in the background

At Bruce’s grave side