This morning we went to church with Steve and Bernice.  They had warned us that it was big.  Even at that, I wasn’t prepared for how huge it is.  It’s called Northland Distributed Church because simultaneously with one of the two services in this building, it’s being broadcast (distributed) live to branch churches all over the country.

I hadn’t brought my camera to church with me, but once I saw it I wanted to take pictures.  Bernice loaned me her smart phone: 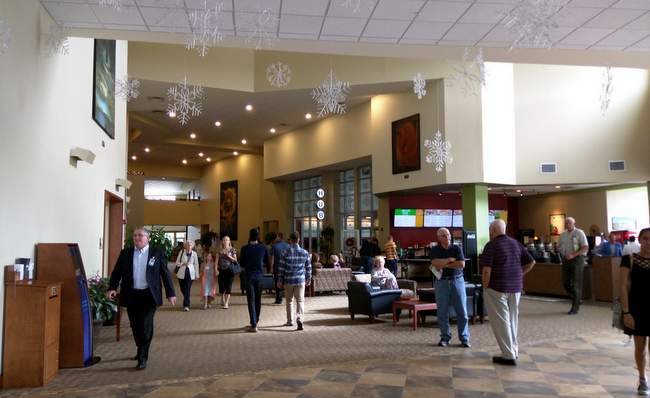 This is the lobby in one direction. About half way down, you can see the word “HUB” in lights. They have something like an internet center in there where the young folk mostly hang out. 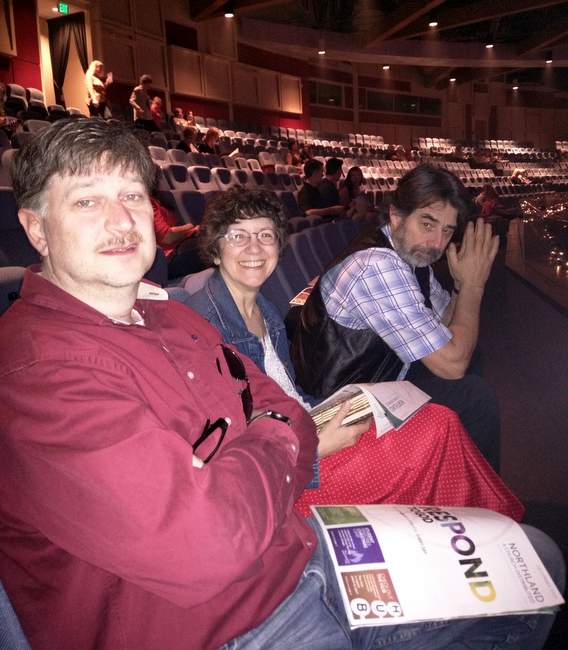 You can see a newspaper on Steve’s knee. It’s a several page newsletter of everything that’s going on at the church. 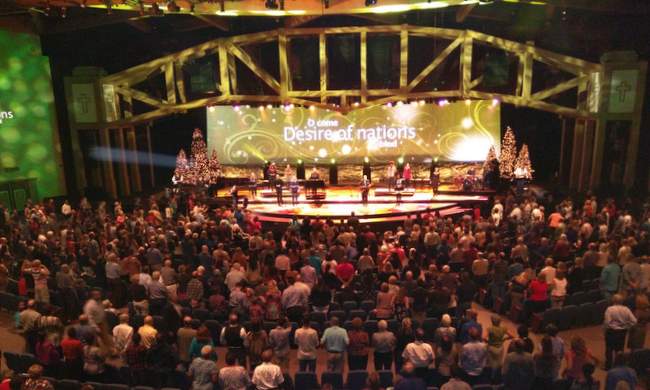 We sat up in the balcony so we could have a central view. See the streak on the left side of the picture? That’s like a laser light show from the lights behind the musicians. The words to the music were on the screen behind them and also on the two walls on either side.

The music was good, but most of it was new to me.  I liked the various colors of lights. 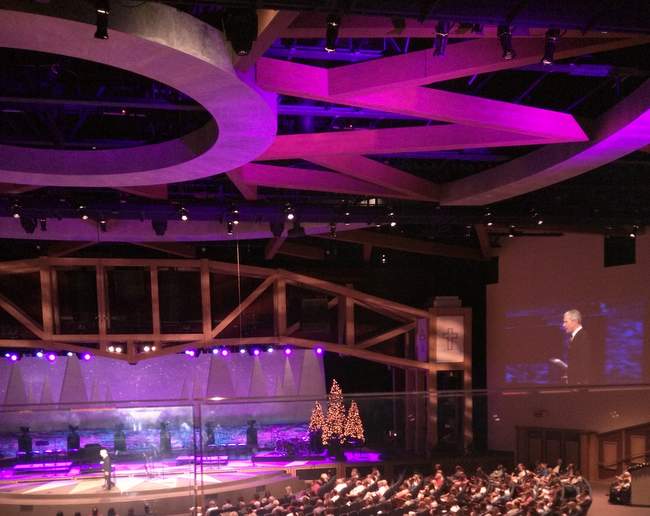 It’s a good thing they projected the pastor’s face on the screen because he was so small all we could see were his gestures.

The pastor’s sermon was about waiting.  He talked about being patient for God to answer our prayers in His time.  I needed to hear that today.

When Steve and Bernice were telling us about the church before we went, they said they really like the pastor and he preaches good sermons, but in such a large church, it’s difficult for them to get to know anyone or make friends.  They miss their church in Washington even though they’ve lived in Florida for about ten years.

After church, we went out to dinner with them, and this time Mark beat Steve to the check!  They have been wonderful hosts.  This weekend is the most I’ve really gotten to know them since they were grown up and I have thoroughly enjoyed this time with them.

When we got back to their place, we took several group shots before leaving: 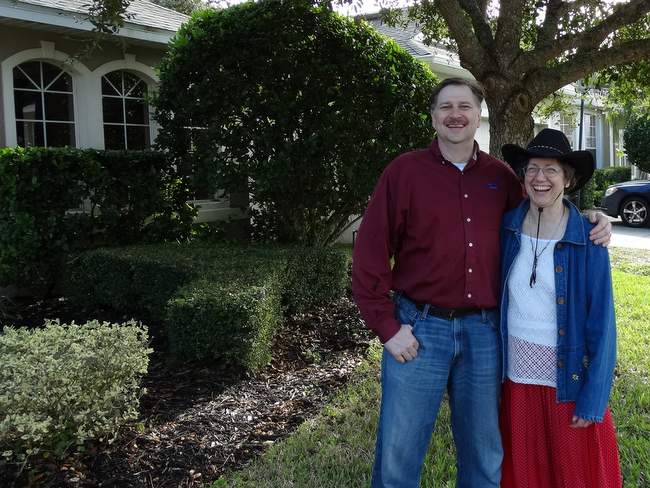 Bernice offered to take a picture of the two cousins. Standing next to me right before she took this picture, Steve said, “You’re short!” It cracked me up! 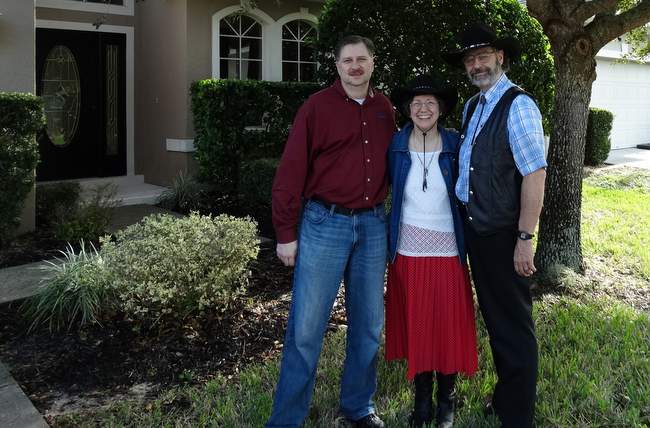 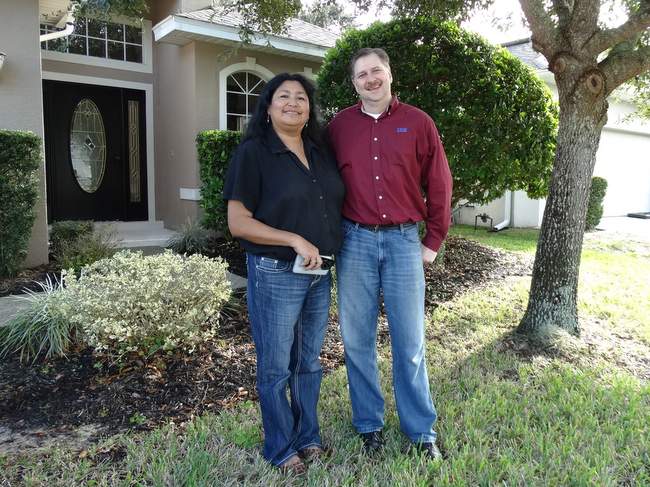 Steve and Bernice Brim (Aunt Marg’s kids for those of you who remember her from when we were establishing residency in Washington a couple years ago.) 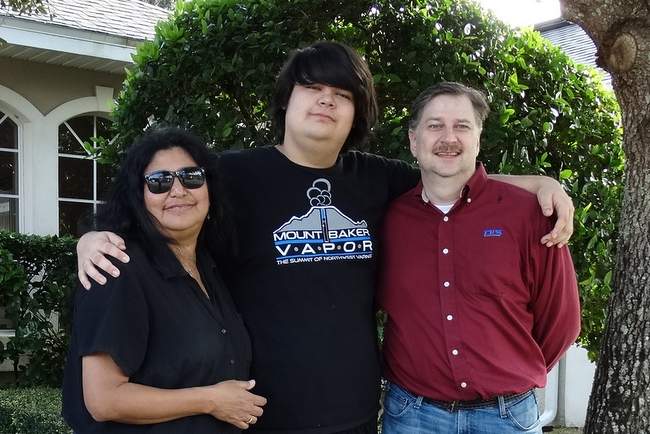 Just before we left, Thomas returned home so we got a family shot.

It was so good to be with them, it was hard to say goodbye, but there is the hope that they will be able to come and visit us when we start our new job.

On the road again, we saw something you don’t see every day: 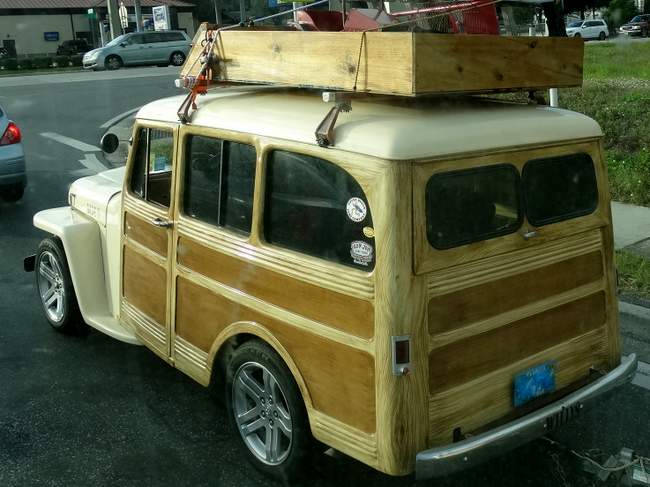 Mark says this is a new car made to look like an old woody.