Yesterday Mark paid for a brand new tow dolly still in the box at Camping World in Burlington, WA, and they promised they’d have it ready for pick up today by noon.  We ran a couple errands in Lynden and then drove down to pick up our new tow dolly.

Camping World had assigned a man they just hired to put the tow dolly together for us.  When we got there he was still working on it.  I had come separately with the car, so when I got there I asked Mark where our old tow dolly was so that I could take pictures.  He told me that one of the Camping World employees wanted it.  I said, “Who’d want our broken rust bucket?” and he said that the employee wanted it for a fix-up project so that he could have a cheap tow dolly.  Whatever…

The broken old rust bucket. See the broken rod on the left? Also the chains were too short and weren’t working.

When we went back to where the mechanic was working on our brand new tow dolly, he seemed to be having problems with the wiring.  He was about ready to give up and send us on the road with no lights and no brakes, but his superior came and looked at what he’d done and said he’d fix it.  The new guy had messed up all the wiring.  We didn’t get out of Burlington till 3:00, but we left with a shiny new working tow dolly. 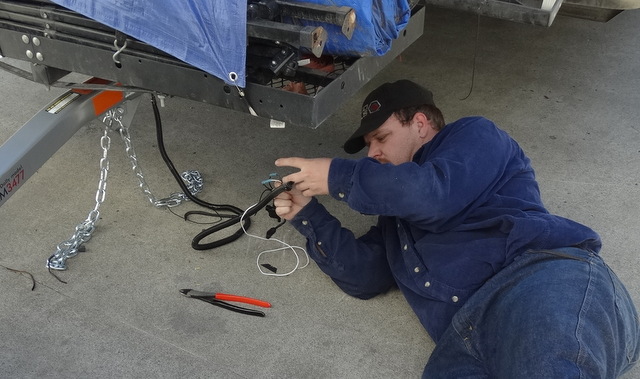 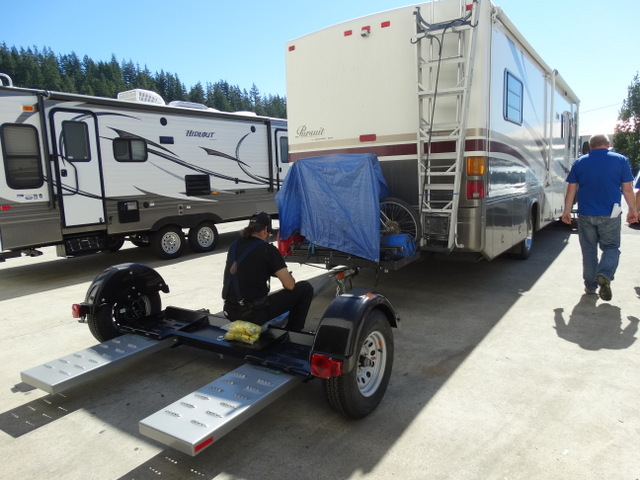 His superior to the right. He fixed the wiring. Shiny new tow dolly!

We drove from there down to Seattle and then turned east on I-90.  As we started into the mountains I got a couple pictures and then the camera died.  I had forgotten to charge it last night, so you’ll have to settle for my observations without pictures. 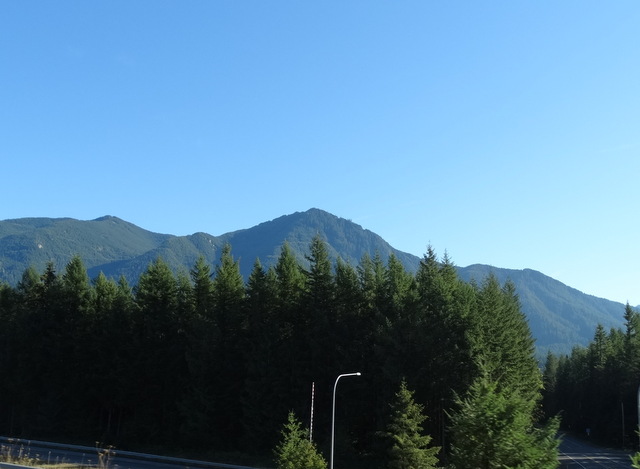 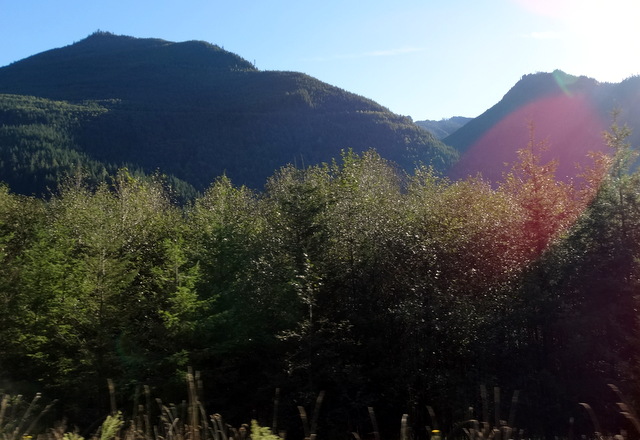 The last shot before my camera died.

After seeing these lush green mountains, we came to a lake that had formed behind a dam, but the beaches were all full of tree stumps.  I asked Mark why they had cut down all the trees on the beaches, and he explained that they had done that before the dam flooded the area.  What we were seeing was apparently either the results of a severe draught or what happens when they release a bunch of water from the dam.  Maybe both.  Further on we crossed the mighty Columbia River and from the bridge I looked down at the shores and saw cracked earth, another sign of extremely low water.  I’m a little worried for you folks in the NW.  I hope you have a lot of snow in the mountains this winter.

Besides the dam, I also saw a place where there were a bunch of solar panels facing the sun (which had come out today and was making me hot for about the first time all summer).  In another location there were windmills across farm lands and lined up on the mountain tops.  This was in the rain shadow of the mountains where I imagine sun and wind would be good options for power.

After we crossed the Columbia River, we came to a town named George.  Get it?  George, Washington!  And there was a building in town called the Valley Forge Fruit Company.  The town fathers must have had a sense of humor!

Another thing we saw a lot of that I’ve never seen before was piles of hay bales all wrapped up.  They had a sort of tarp tent snuggly wrapped around them and, in some cases, zipped up tight.  I guess that was to protect them from the winter weather that’s hopefully coming.

For a long while we drove in the dark.  We didn’t get to our camp site till 10:00 this evening.  That’s the latest we’ve stopped for the night on this trip.  It wasn’t scheduled to be such a long run, but things don’t always go according to plan.