One thing I forgot to mention about yesterday was that after we used Mark’s Wells Fargo card for gas, the card stopped working.  I had called all our card companies before we left Washington to let them know we’d be traveling, so we were perplexed as to why Wells Fargo froze our card.  Mark called them this morning and, sure enough, they had a note in their computer that we’d called them in advance about our trip, so they unfroze the card.  If they hadn’t, we couldn’t have proceeded any further.

We left Prince George at 10:45 this morning and headed out on a rather desolate stretch of highway.  After several hours we came to MacKenzie Junction where there was a gas station/store/restaurant that we stopped at.  I found a topographical atlas of northern British Columbia that I bought so we could get some idea what is ahead.  Another hour and a half or so brought us to Chetwynd where we turned up to Hudson’s Hope which was probably forty-five minutes more.  Those were the only three areas of civilization in the six hours we traveled today.

The scenery was outstanding!  For the first time we began to see snow in patches in the forests beside the highway.  Birch trees mingled with pines and the mountains were so high that at one point we went down a 6% grade.  We had no problems though.

Chetwynd appears to be a lumber town.  We passed a lumber yard with mountains and mountains of logs — literally thousands of logs piled up.  We crossed over the Peace River to get to Hudson’s Hope.  There are two dams across the Peace River that have created lakes.  One of the lakes flooded an area where various types of dinosaur remains were discovered, including the earliest known birds or pterodactyls.

We are camping at Lynx Creek which is a little east of Hudson’s Hope.  When we got set up here, we off-loaded the car and drove back to Hudson’s Hope to see their museum.  The museum was closed by the time we got back there, but a good portion of it was outside.  There were log cabins and I was able to take pictures of the insides through the windows.  There was also a log church next door that is actually in use.  In fact, the sign out front lists four different denominations that worship together in that church.

We took these pictures:

How far we’ve come in the last 2 days! 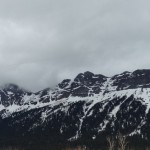 Coming through the mountains 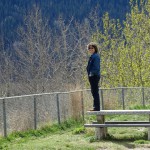 Me at a rest stop 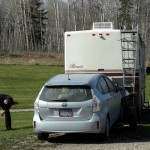 Mark getting us set up in camp 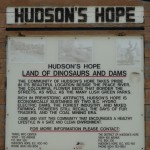 A little about Hudson’s Hope 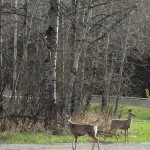 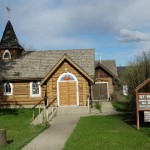 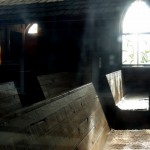 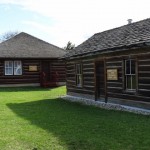 Some of the museum buildings 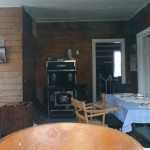 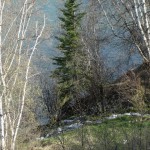 Looking at our shore of the Peace River

1 thought on “From Hudson’s Hope, BC”