We got up early again this morning, and it didn’t take long to break camp and drive to the border.  They remembered us when we drove up and had us park and fill out some paperwork.  Mark told them that all he has with him now is his shotgun and ammo for it.  They charged us $25 (Canadian) and let us go without even looking in the RV.  We left the border at 8:00 this morning.

The first part of our trip was through the Canadian Rockies — beautiful jagged snow-capped mountains with tall waterfalls cascading down them.  As far as the town of Hope, we were in territory that we had already traveled once before on our honeymoon.  However at Hope we turned more northward and entered territory that was virgin to us.  Although there were still tall mountains pressing in on us at first, they weren’t the craggy Rockies but, rather, very large foothills.

I have been reading a book to Mark that Aunt Marg gave to us.  It’s called Once an Arafat Man by Tass Saada.  Tass is a Palestinian and when he was a teenager he ran away from home and joined the Fatah.  For three years he fought for Yasser Arafat, chauffeured him, and acted as a sniper.  As an adult he lived in America and he had a wife and children with whom he had a very bad relationship.  In his 40s he became a Christian and his life was radically changed.  He now works in the Middle East trying to help both Arabs and Israelis find Christ and find peace.

When I finished reading that book to Mark, I began another:  Shadow of the Almighty by Elizabeth Elliott.  The book is about Jim Elliott who was one of five missionaries killed by the Auca (or Huaorani) Indians in Ecuador.  My father was interviewed as a high school friend of Jim Elliott’s and is quoted in the book.

As I was reading I periodically looked up at my surroundings.  We got into country that looked a lot like eastern Oregon, with sage brush and low, sparse pine trees.  I didn’t know Canada has that kind of landscape.  I have always thought it is all heavy forests and mountains.

Around 2:00, after driving for six hours, we came to 108 Mile House and got out to walk around.  We found a horse tied to a tree and a little village of log buildings.  It looks like in the summer they must have programs there for tourists, but we didn’t see anyone there today.  We got pictures, which I will share in a moment.

We continued on and finally reached Williams Lake where we had planned to camp last night, but we passed that and around 7:00pm (about eleven hours from the time we crossed the border) we pulled into a campground just south of Prince George.  Prince George is about half way to where we had originally planned to camp tonight, but tomorrow night we will be back on schedule.

Now here are the pictures we took at 108 Mile Ranch: 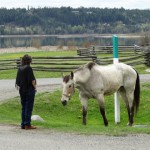 The old nag (You decide which is the nag!) 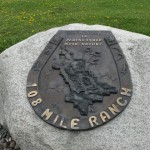 The rock says it all 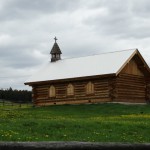 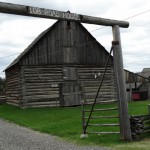 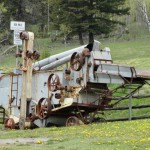 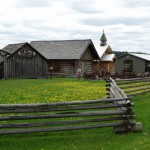 Part of the model village