We left Kingman, AZ this morning after having called our camp hostess in Milan, NM to see how the weather was.  She was kind enough to call us several times throughout the day to see how we were progressing and give us instructions on how to get there.

We were climbing most of the day, from 5,000 to 7,000 feet in altitude.  It was funny to start the day out amongst cacti and tumbleweeds, get to Flagstaff which reminded me of Black Butte on the east side of Mt Hood with tallish trees, and then go back to tumbleweeds again.  There were often patches of snow on the sides of the road, but the road was dry and the sky was clear blue.

I have been reading a book to Mark the last couple days that my older sister gave me before we left her place.  The book is called Is That Really You, God? by Loren Cunningham who started Youth With A Mission (YWAM).  He talks about various ways God has spoken to him throughout his life.

We passed Williams, AZ which was the farthest I had ever been east on I-40 up until today, so the rest of the trip will be virgin territory for me!  There was a road I would have loved to turn down, but we were concerned about getting to our campground before nightfall.  The road led to a meteor crater I first learned about in a college science class years ago.  This is a place where a meteor impacted so hard that it left a huge crater that is still easily visible today.

There are a lot of Indian Reservations in Arizona, and we stopped at a gas station in Navajo, AZ to use the bathroom and came out with a souvenir for Mark’s granddaughter.

I mentioned before that today was a red letter day, and here’s the reason why:  Part way through the day, Dobby began to make forays out to meow at us and let us pet him.  At first he wanted to stay on the floor where he couldn’t see things moving, but eventually he got so brave that he even jumped up on the dash board and looked out.  I took pictures of this momentous occasion! 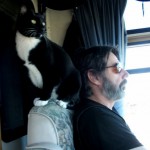 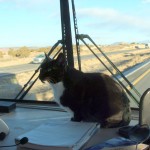 Dobby on the dashboard in NM