Today was a day of remembering our Vacation From Hell.  Many of you will remember that as well, but I’ll retell it for the newcomers.  Remember:  The first part is just a retelling, so don’t panic!

In 2009 Mark and I had some books to deliver to a school in Mexico and we decided to make a vacation of it and see the Grand Canyon as well.  We had a different RV then, and it was due to the Vacation From Hell that we lost that RV.  We had reservations to stay at a camp in Lake Isabella, CA.  Our instructions said to get there from Bakersfield, but looking at the map, it looked like it would be shorter to take 155 from Delano.  It went fine for a while, then it went way up, and then it started to go down.  We were towing a car behind us, and Mark decided to test the brakes.  He couldn’t get the RV to stop.  He tried again a little further down the road, and this time he put everything into it.  He stood on the brakes and pulled the emergency brake and he finally got the RV to stop.  He jumped out to see how the brakes looked and found they were on fire.  He got the fire put out and we tried to use a call box to call for help, but it didn’t work.  We used our cell phone and called AAA and they sent two trucks out.  (One for the RV, the other for the tow dolly, and we drove the car down.)  At the bottom of the mountain, the back end of the RV which was lower than the hoisted up front caught and came loose.  The next morning we went to the garage and they said they’d have to order parts and it would take three days to fix.  Mark and I decided to take our car to Mexico and deliver the books and come back in time to get the RV.  However, when we got back, they had fixed the front brakes and then discovered that the back brakes were broken.  They were going to have to order those as well, but fortunately that only took another day.

In the meantime, Mark and I had explored other ways in and out of Lake Isabella and decided the easiest way out was toward the Mojave Desert.  (This was in July of 2009, which turns out to be important.)  Mark and I were feeling pretty good as we drove our newly fixed RV onto the desert, but around 10:00AM we heard a loud bang.  One of the inner tires on the back of the RV had blown up and we didn’t have a jack big enough to lift the RV and fix it.  We called AAA and they sent someone out to fix it.  We went on our merry way until around 2:00PM near Ludlow when we heard another loud bang.  This time it was the inner tire on the other side of the RV.  We called AAA, but they said we were far enough out in the desert now that it would cost $500 for us to get someone out there to fix the tire, so Mark decided just to limp along on the side of the road till we could get to Needles, CA and get it fixed.

We were limping along in the emergency lane just west of Essex when I saw a call box approaching me.  I assumed Mark could see it, so I didn’t say anything until the last second, but that was too late for Mark to avert danger.  He hit the call box with the arm of our awning, which knocked the call box off in the ditch, tore a two foot long gash in the side of our RV, and wrecked our awning.  We stopped to look at the damage, and a police car pulled up and asked if we needed help.  We confessed to having hit the call box and he took our insurance info.

We finally made it to Needles, CA and got the tire fixed and were on our way again.  We stopped in Williams, AZ for gas before heading to a campground near the Grand Canyon, but after gassing up, the RV wouldn’t start.  Mark worked on it for a while, and then we had to have a tow truck come and tow us to a local garage.  They checked our RV and thought our solonoid was out, and they said they could order it, or they could teach us how to hotwire the RV till we could get somewhere that had one, so we opted to learn to hotwire it (which we ended up having to do the rest of the way home).

We got to the campground we had expected to stay at near the Grand Canyon and Mark started to fill out the paperwork, but then we discovered that there was a reason we couldn’t stay there.  I don’t remember now what the reason was, but we went to look for another campground and found one better suited.  However, when Mark went to reach for his wallet, it wasn’t in his pocket.  He had taken it out at the other campground and hadn’t put it back in his pocket.  He took the car and rushed back to the other campground and looked all around the registration area, but he couldn’t find his wallet.  Fortunately, the camp host saw his panic and asked if he’d lost a wallet.  Someone had found it and given it to the camp host, and everything was still inside it!

When we got home from that trip, we tried to call our insurance company to see if they’d cover all the repairs that the RV needed, but instead they decided to total it.

So today we were traveling down memory lane every time we came to one of those spots.  Fortunately, this time we didn’t have any of those problems.  We went from Tulane to Bakersfield and turned east on 58, which later became I-40.  We went up verdent green mountains with a dusting of snow on the peaks, and then we passed into the rain shadow where the landscape turned into sage brush and Joshua trees.

Someone at our last job said I needed to try driving the RV so that if anything happened to Mark, I could take over.  Mark and I had discussed this and decided that the Mojave Desert would be a good place for me to try.  I drove eighty miles from the rest stop at Newberry Springs to the rest stop at Essex.  Before this, the biggest thing I had driven was a school bus, but driving an RV is a whole different thing.  The steering wheel is very sensitive and I found it hard to stay in the middle of the lane.  If I swerved too quickly, the RV swayed like it might fall over on its side.  Whenever big trucks passed me, there was a wind that was a little frightening.  I was white-knuckling it for probably forty miles, and Mark was as nervous as I was, but things eventually seemed to smooth out some.  That’s not to say I feel ready to try driving in the city, but in an emergency situation, I could probably take over if I had to.  Mark took a picture of me.  I think I was gritting my teeth in the picture! 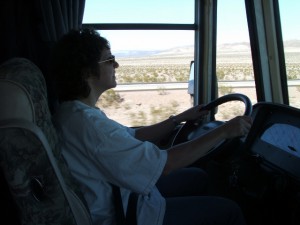 Denise driving through the Mojave Desert

1 thought on “From Kingman, AZ”