We so enjoyed the beauty and quiet of Hudson’s Hope and the Lynx Creek RV park where we stayed last night (right next to the Peace River) that it was kind of hard to leave.  The sky was heavily overcast and as we drove into Fort St John to get gas, we saw light flurries of snow.  The snow wasn’t sticking.

From Fort St John, we got back on the Alcan Highway (97).  During the morning we passed three wide spots in the road with a couple buildings.  On the stretch we went through this afternoon, there was nothing other than the highway that resembled civilization.  At one point we saw a herd of four mule deer (like the ones I showed a picture of last night), but later in the afternoon, to our immense pleasure, we saw a black bear foraging along the side of the highway.  It seemed a rather small bear, but it’s the first we’ve ever seen in the wild!

We also went over two mountains today that were over 1200 meters each.  We used to think a 6% grade was steep.  The grades we went down today ranged from 7% to 10%.  Yikes! 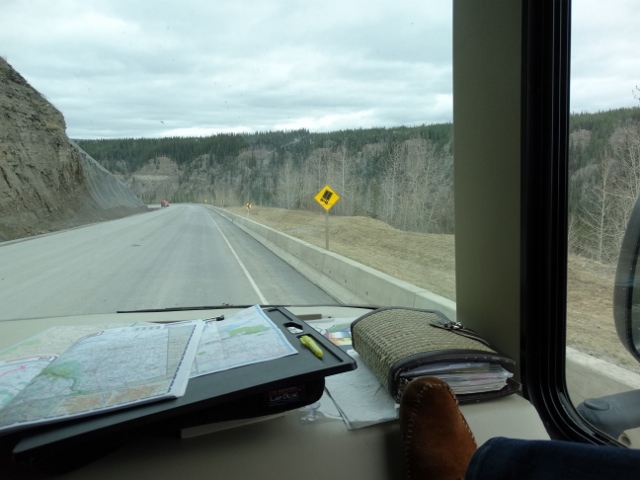 I have not been able to find one whole map of British Columbia.  Yesterday I reached the extent of the map in my road atlas, so today I used a map that includes northern BC, the Yukon Territory, and Alaska.  The new map is slightly smaller in scale.  My pink marker is running dry so I started marking with a yellow marker on the new map.  Here is how far we’ve come so far on this trip: 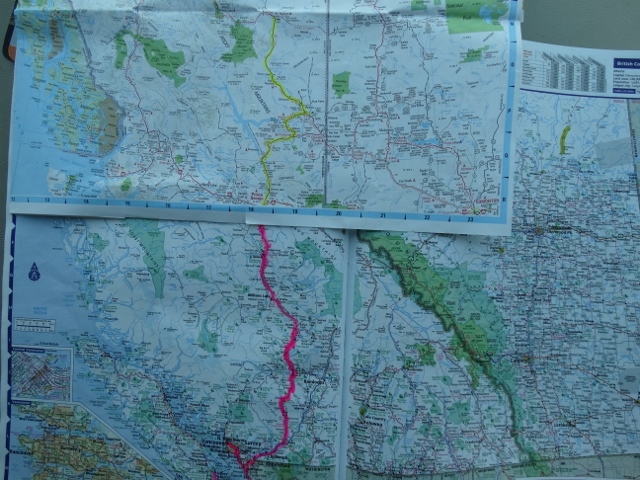 Tonight we are in Fort Nelson, a fairly good-sized town for northern BC.  There is actually an IGA where we got some groceries.  The RV park here is nice and the people are friendly.  This will be our last night in British Columbia.

1 thought on “From Fort Nelson, BC”