I’m a little confused.  Yesterday the sunset time I saw for Portland, OR was 9:10pm.  Today I’m seeing sunset in Portland is 8:36.  I don’t know which is right, but sunset in Watson Lake tonight is 10:07pm!  Also, one thing I forgot to mention yesterday was that we’d seen a couple hikers walking along the highway pushing or pulling little carts with their supplies.  I think they’re making a trek along the Alcan Highway.

Most of today was amazing!  I’m trying to remember all the kinds of animals we saw.  There were black bears, brown bears, mountain goats, bison, caribou, a moose, a rabbit, and what we took to be an otter, ferret or mink although it was running very fast among the trees.  The lakes were frozen in spite of it being warm and sunny with blue skies all day.  We went through mountain passes and across rivers.  There was one stretch of road where the pine trees to our right were diseased and dying.  The ground looked like Pick-up-sticks with all the fallen trees.  On the left side of the highway the trees were healthy and green.  I hope the disease doesn’t jump over the road.

I finished reading Shadow of the Almighty by Elisabeth Elliot to Mark today.  It contains the writings of Jim Elliot, one of five missionaries that were killed by the Huaorani people of Ecuador (also know as the Aucas).  Something that jumped out to me on this reading of the book was Jim’s interest in the poetry of Robert William Service.  Service received his fame and fortune as the “Bard of the Yukon” for writing such poems as “The Shooting of Dan McGrew” and “The Cremation of Sam McGee”.  We’ve seen his books for sale up here!

It was only when we got to Watson Lake that we began having problems.  I think I mentioned before that when Mark tried to use his Wells Fargo card yesterday it was denied in spite of the fact that I had called them in advance to let them know we would be traveling.  Mark called them yesterday morning and got it straightened out (or so we thought) so that we were able to get gas.  When we arrived in Watson Lake, we stopped and filled the tank and Mark went to pay with his card and it was denied again.  When he tried to call them, their offices were closed for the day.  Mark had to leave his card at the station and promise to come back in the morning to try to straighten things out again.  If anyone is considering getting a Wells Fargo card, don’t!

So then we drove up the road a few miles where I had made reservations for us to spend the night.  When we got there the gate was closed.  I went into a little store on the property and told the man we had reservations and was there anyone who could register us.  He said “The park hasn’t opened yet.”

I said, “But I have a reservation.”  He asked if I’d made it by phone or e-mail and I said I had made it by e-mail.

He said, “I take the phone reservations and the owners take the e-mail reservations.  They have been stuck for the last week in Prince George and only arrived today.  We don’t have water yet so we aren’t open.”

If you ever travel up to Watson Lake, don’t make reservations at the Baby Nugget RV Park in Nugget City!  We ended up coming back to Watson Lake where we found an RV park called Downtown RV Park.  The manager or owner has a wonderful brogue and he had room for us to park tonight.  He knew of the reputation of the Baby Nugget RV Park and said they don’t have full amenities anyway.  He does.  This park isn’t particularly beautiful, but it’s handy to several things to see.

There is the Northern Lights Centre which has a planetarium show with images of the northern lights.  The Watson Lake Visitor Information Centre has a 30 minute DVD presentation about the construction of the Alaska Highway.  We didn’t have a chance to go to either of those, but we did see something else Watson Lake is famous for: “Watson Lake is known for the signpost collection that was begun by a homesick soldier during construction of the Alaska Highway in 1942.  Over the years, tourists have continued adding signs showing the names of their hometowns, and now the collection includes more than 60,000 signs.”  (2013 AAA Tourbook Guide of Western Canada & Alaska) 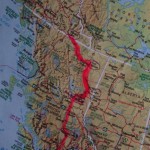 How far we’ve come to date 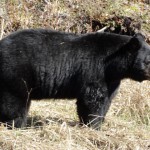 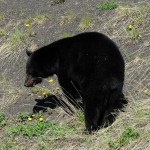 Couldn’t quite tell if this is a mama and cub 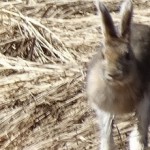 Rabbit on the run 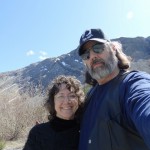 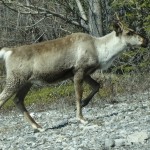 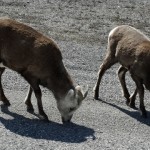 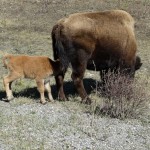 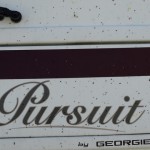 Bugs on the front of our RV 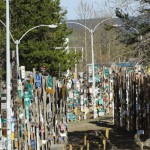 1 thought on “From Watson Lake, Yukon”