The part of Butte, Montana we spent the night in last night was the historic section.  As we were leaving, I took several pictures. 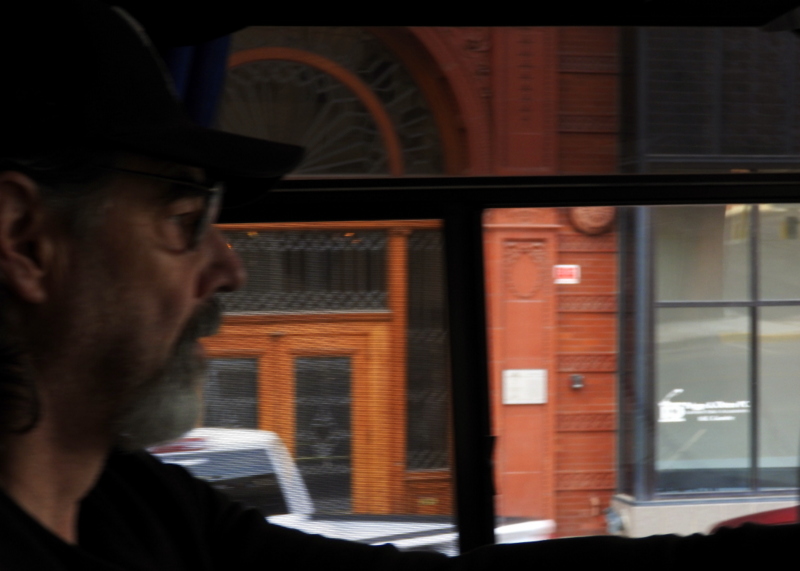 This was a really cool leaded glass door on Mark’s side of the street. 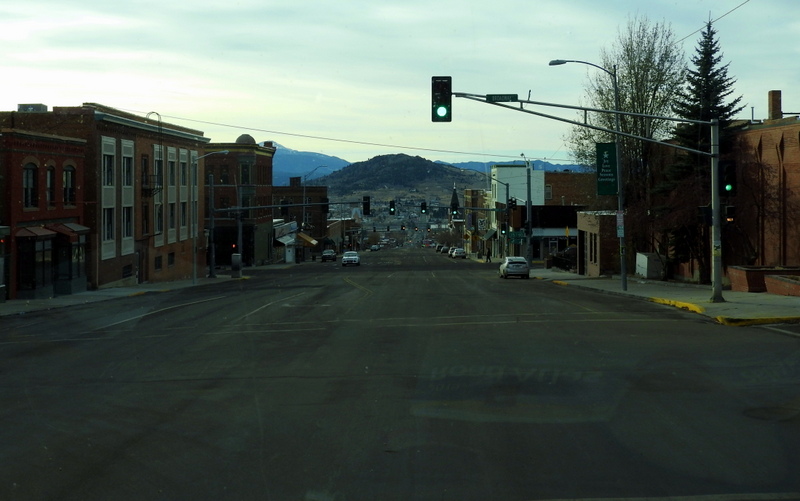 Driving out of Butte with the mountains at the end of the street. 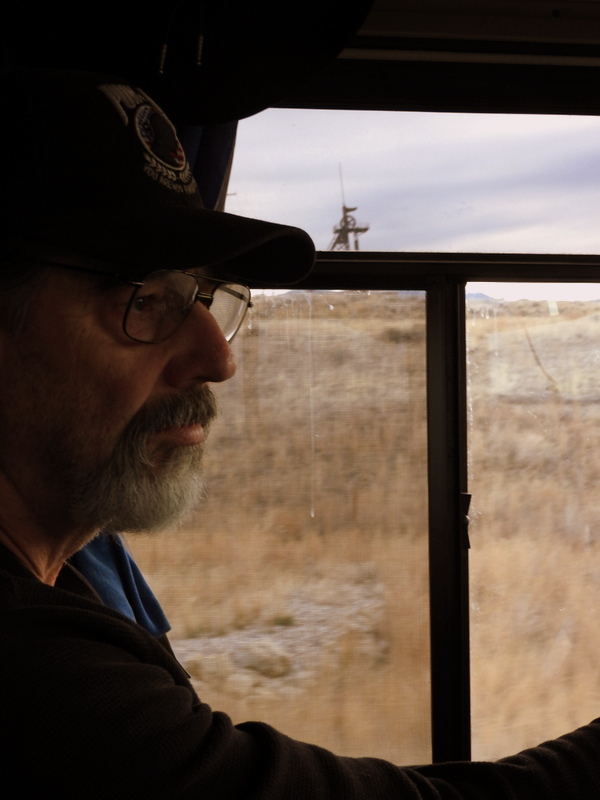 When we drove in after dark last night, I saw a couple of towers lit with red lights like Christmas. In the daylight, Mark said they are mine shafts. You can kind of see one of them behind him here. 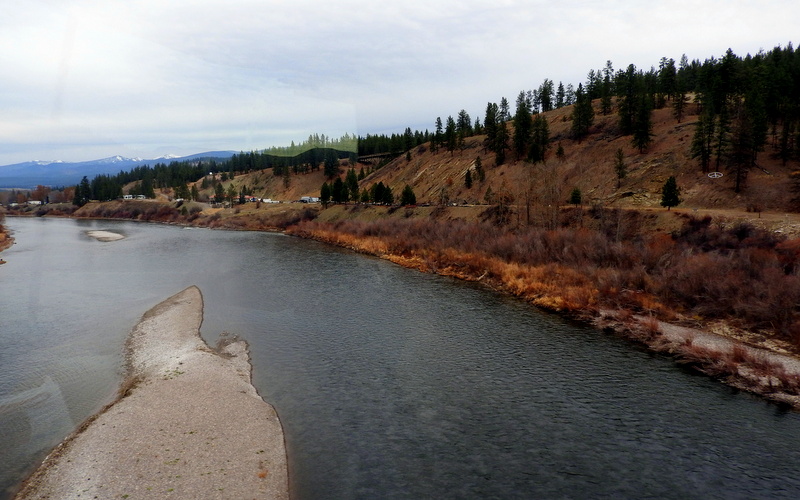 We kept crossing back and forth over a river called Clark Fork, presumably named after William Clark of Lewis and Clark fame. 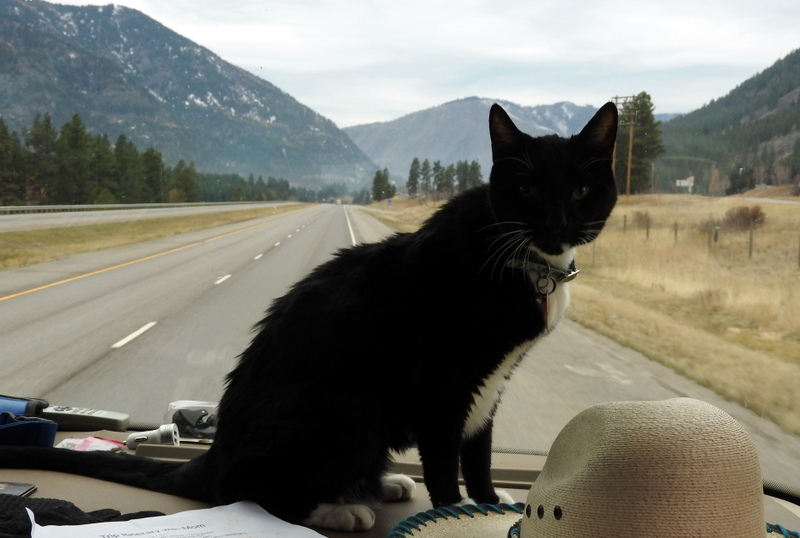 There’s always a certain point in our trip when Dobby finally comes up to the front. It happened today.

I don’t know if you can tell from this picture how thin Dobby is.  He was diagnosed with hyperthyroidism last year, and then he was diagnosed as also having kidney failure.  We give him medications and feed him several times a day, but we can still feel all his bones when we pet him.  Last month, I was told he may also be going senile.  I’ve had him since he was a kitten in 2005 and I don’t know how much longer I’ll have him, but he still boxes Tucson on the nose when he’s feeling cranky, so he’s not ready to give up on life yet. 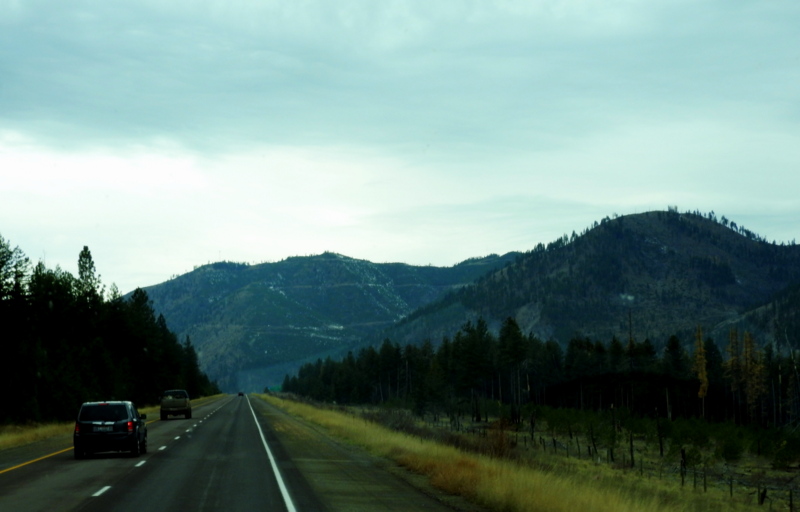 It looks like there’s a white outline of a square on the mountain ahead. 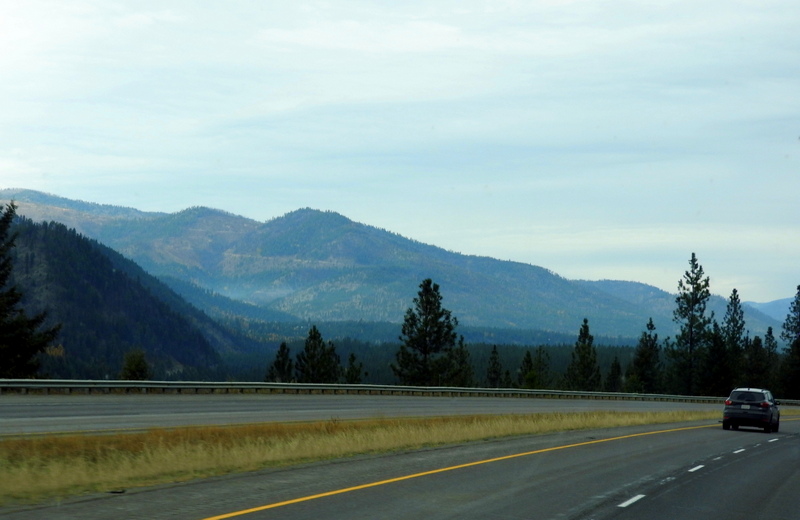 We were up in the Rocky Mountains today.

For the first few hours, Mom kept saying, “Are we in the Rockies yet?”  We finally started climbing and she knew this was it.  Climbing uses more gas and descending uses more brake power.  Mark handles it all with aplomb. 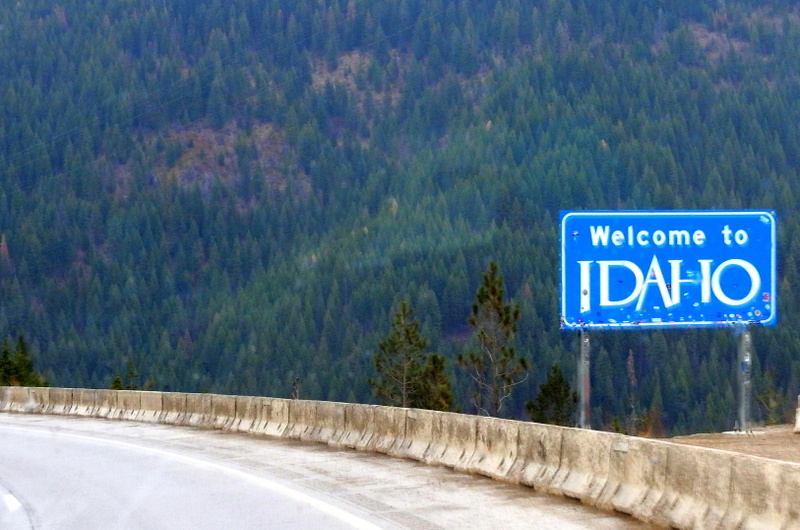 We crossed into Idaho, but at the panhandle of Idaho, it’s only an hour to the other side of the state. 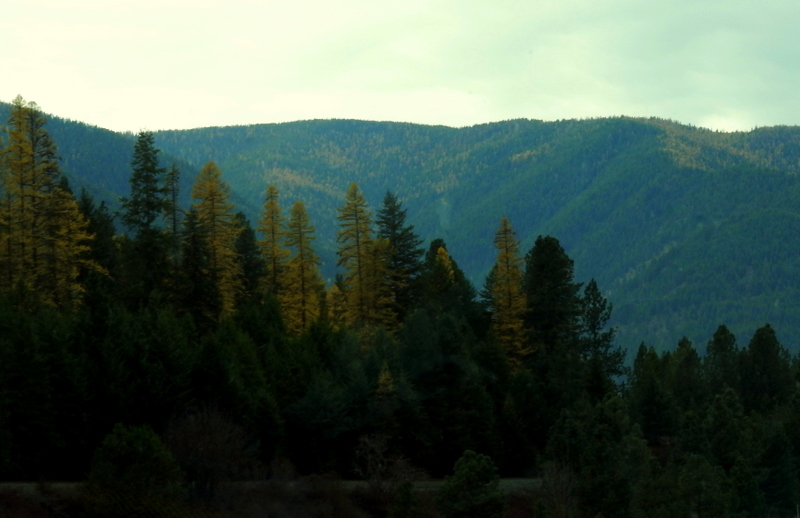 This combination of yellows and greens is beautiful, but the yellow trees appear to be dying fir trees. 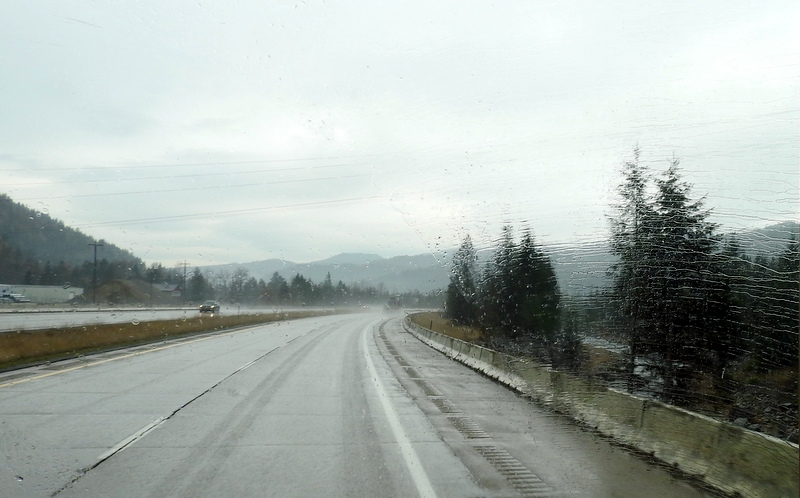 We had been concerned about going over the mountain passes at this time of year, but the worst weather we encountered was the rain we had today. Thank God for traveling mercies! 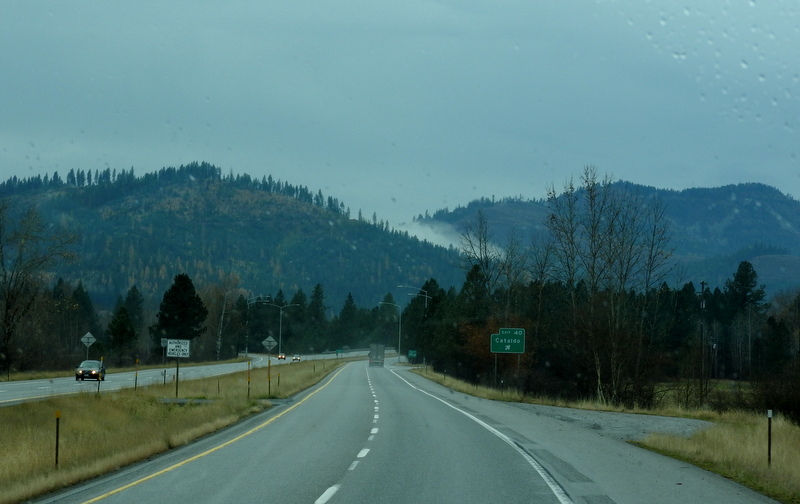 Fog in the mountains 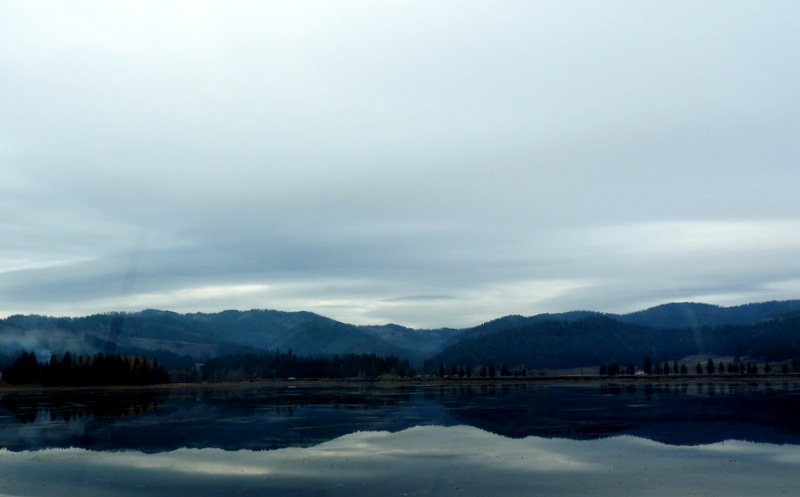 Lake Coeur d’Alene on the western border of Idaho 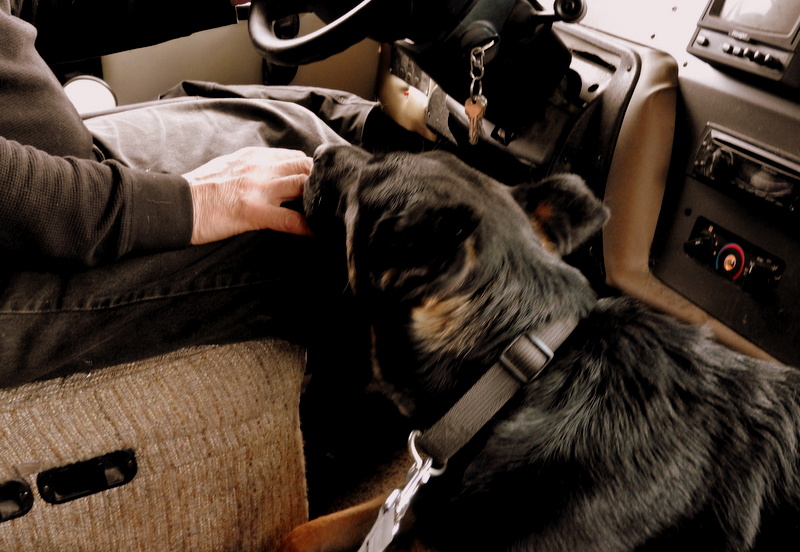 After I snapped this picture of Tucson, I got a message on my camera saying that my battery was exhausted.  I guess I’ve worn it out with all the pictures I’ve been taking!

Mom and I tried to play a game of Bananagrams while Mark was driving down the road.  The tiles were sliding all around the table.  I put the road atlas at the edge of the table and tried to build my words along the edge of it, but the words kept getting mixed up together.  I thought it added to the challenge of the game, but Mom suggested we put the game away, so we did.

Tomorrow is the last leg of our journey and we will only be on the road a few hours.  I try to make the first day and the last day short because there are so many things to do to get ready to leave and so many things to do to get settled in a new place.  We will be returning Mom to her home for which she is thrilled.  Unfortunately, with Monday being a federal holiday, Mom won’t know yet whether her fanny pack with it’s contents has been returned and she won’t be able to get money out of the bank, but she says she’ll be fine.  She just doesn’t want to have to go through the hassle of changing her cards and replacing her cell phone again.  If you could pray for her that these things will be returned to her, I know she’d appreciate it.