This morning, Mark went out to the RV to take care of the critters and found that we had no water.  It was all frozen.  We saw a lot of frozen water today. 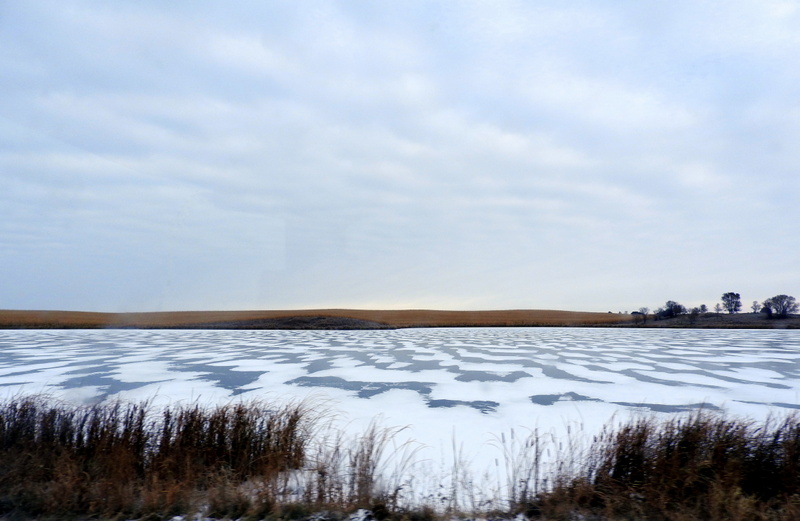 We found some interesting patterns on the ice. 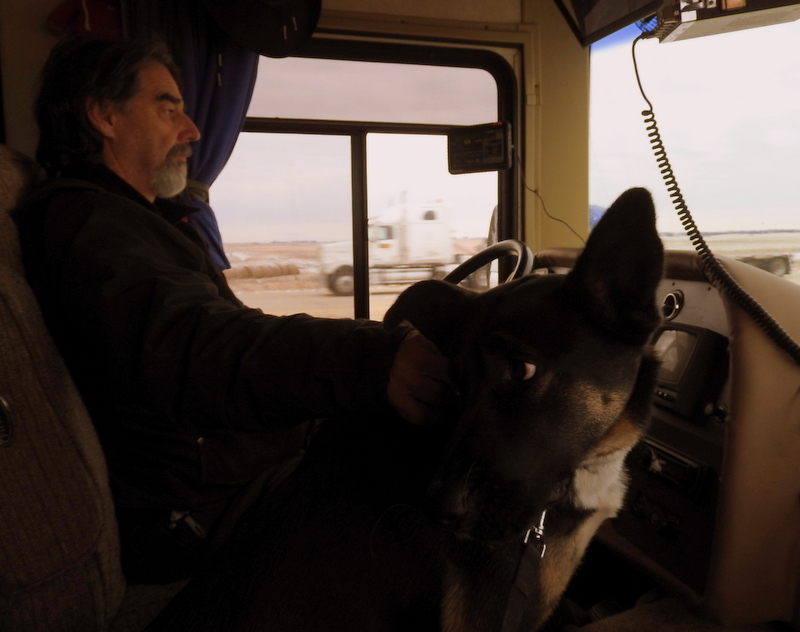 Tucson wants to play in the morning. Mark plays tug-of-war with her and pets her sometimes to help her settle down. 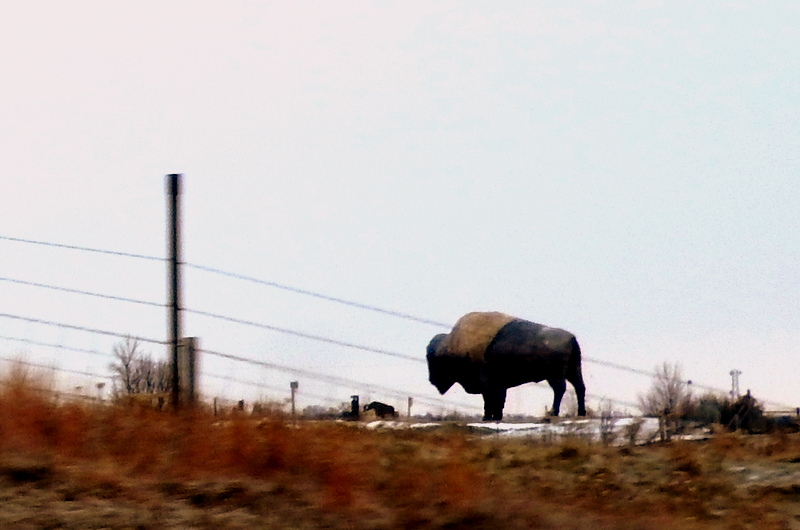 The biggest buffalo in the world 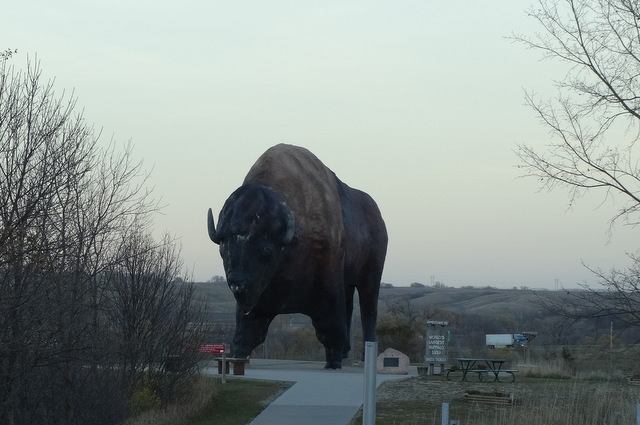 We visited this place in Jamestown, ND some years ago and I had gotten a front view of the buffalo. 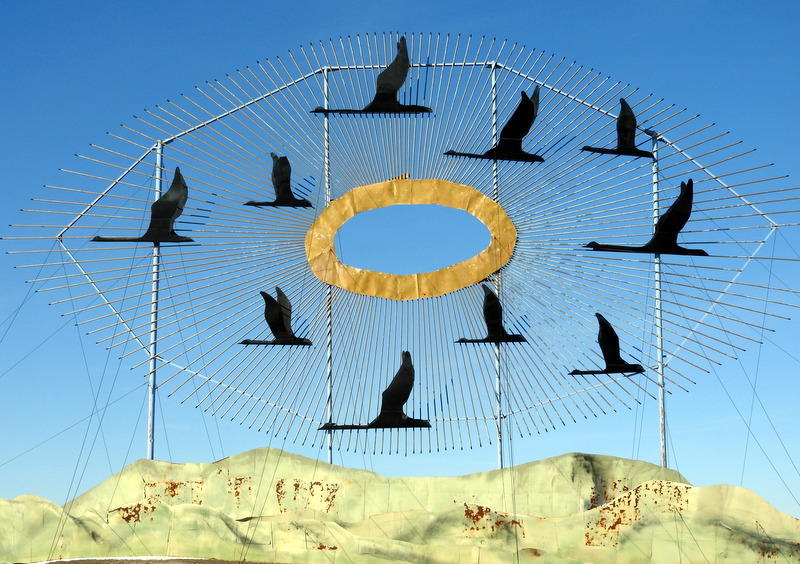 Mark and I had seen “Geese in Flight” several years ago as well and wanted to show it to Mom.

As we were taking the exit off the highway, I looked back and Mom was sleeping, but as soon as we turned on the driveway to go up to this sculpture, a shrill alarm went off and woke Mom up, which was a good thing because she noticed that the kitchen sink was overflowing.  Do you remember that I said we had no water this morning because everything was frozen?  Apparently, when we were trying the faucets, we left one on.  The stopper was in the sink, and as the ice was melting, the water started flowing.  With Mark bouncing over the rutted driveway and the alarm piercing our ears, I tried to reach into the sink and find the stopper to unplug it.  Tucson was obviously nervous, and when Mark got the RV stopped and got on the floor to find a wire to shut off the alarm, she was all over him.  He finally found the wire and pulled it.  It was our propane detector, which hasn’t worked in some time.  It got wet from the overflowing water and decided to start working.  There was water all over the floor, but Mark grabbed a towel and wiped it up.

Then Mark let Tucson out to run off-leash for the first time in several days. 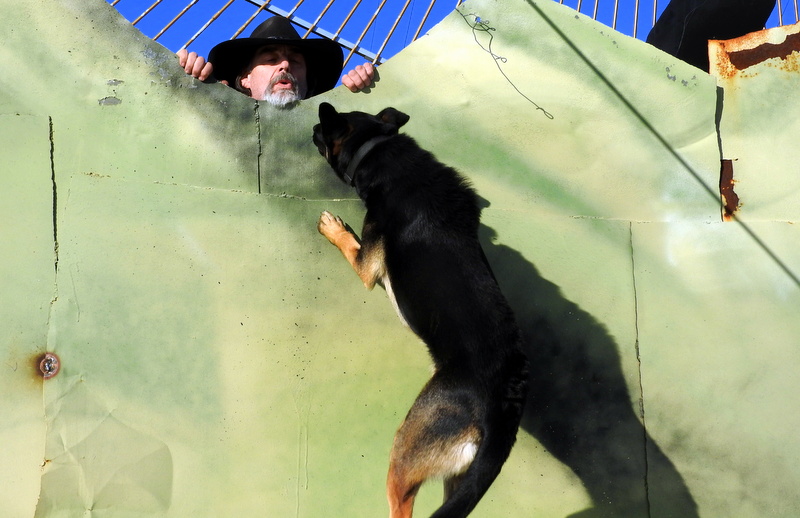 Mark whistled to Tucson from behind the metal mountains and she tried to jump up to him! 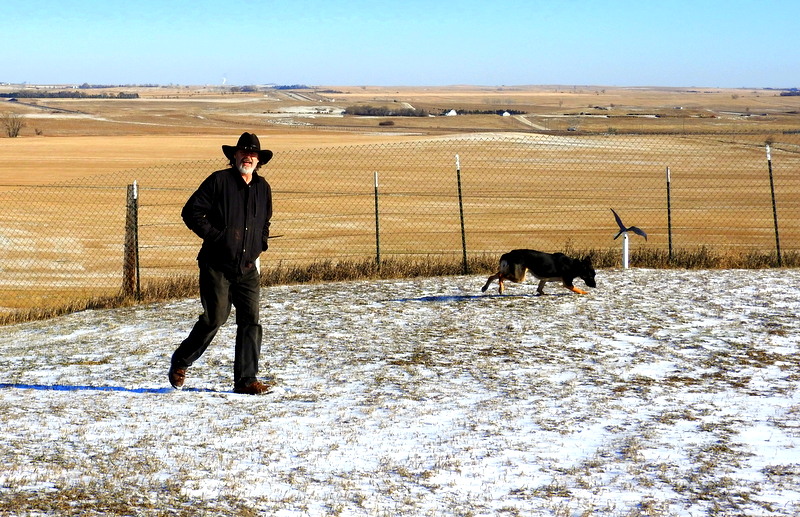 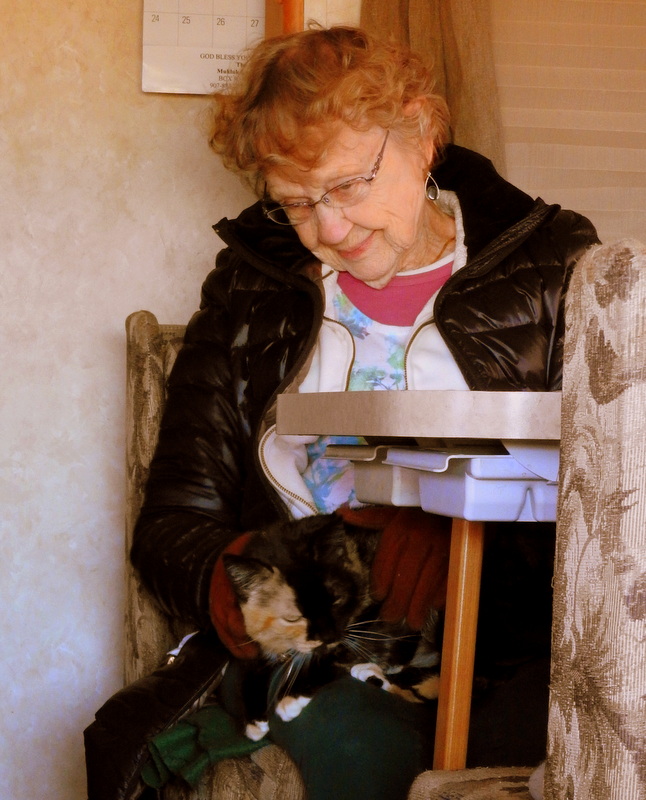 Mom is falling in love with Kimba, and vice versa! 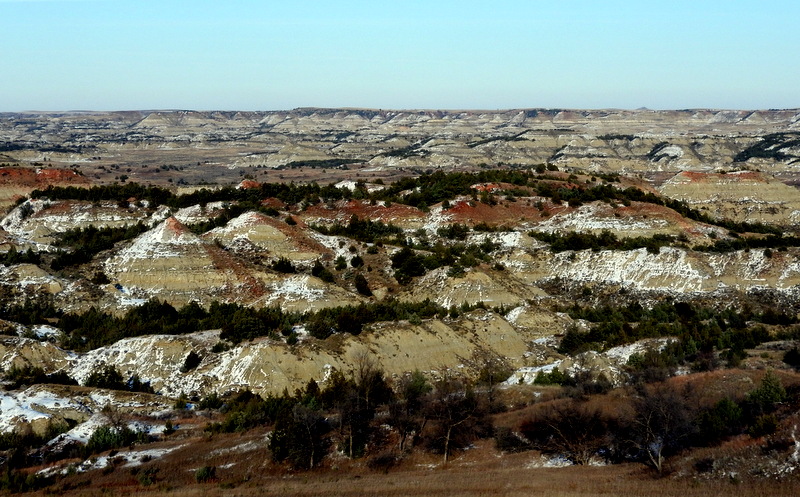 Western North Dakota is like the Grand Canyon of the north. 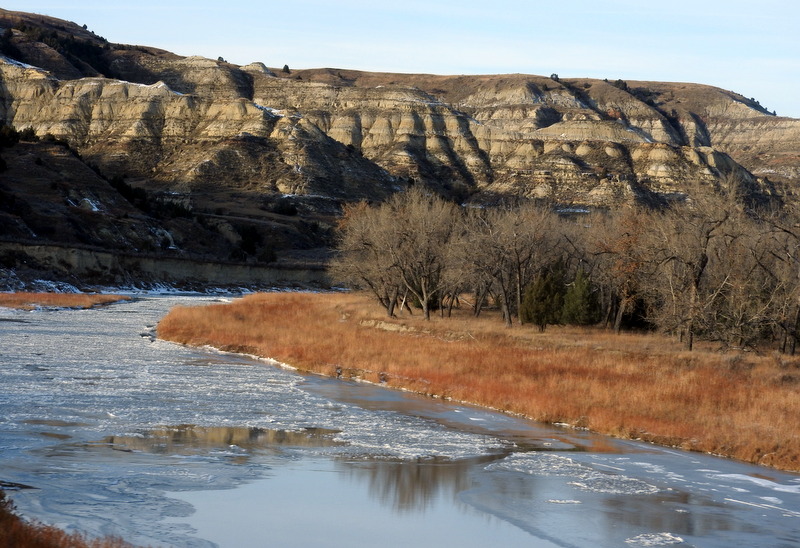 Theodore Roosevelt declared this area to be a national park. 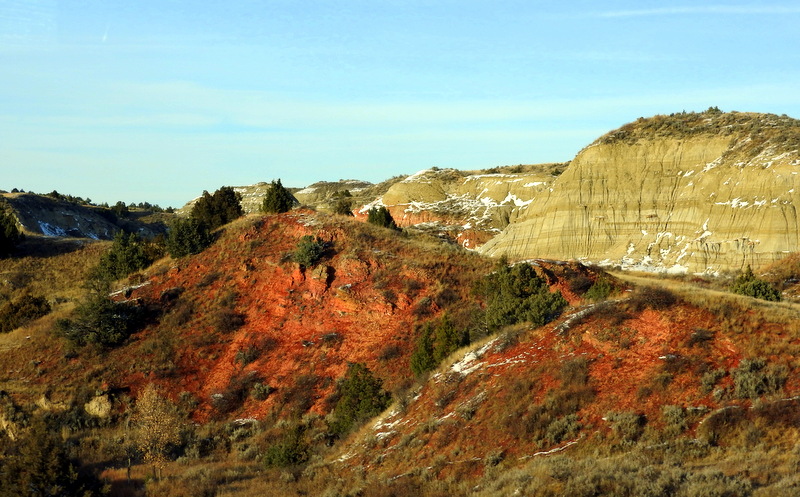 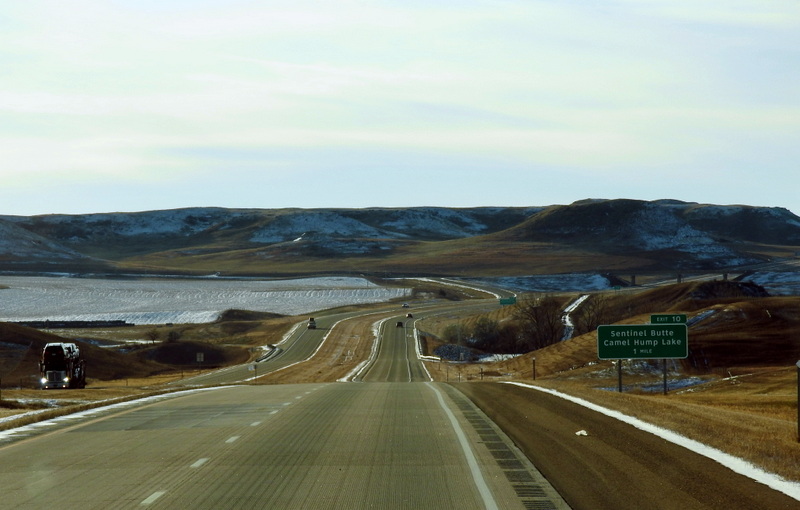 Ten miles from the western border of North Dakota 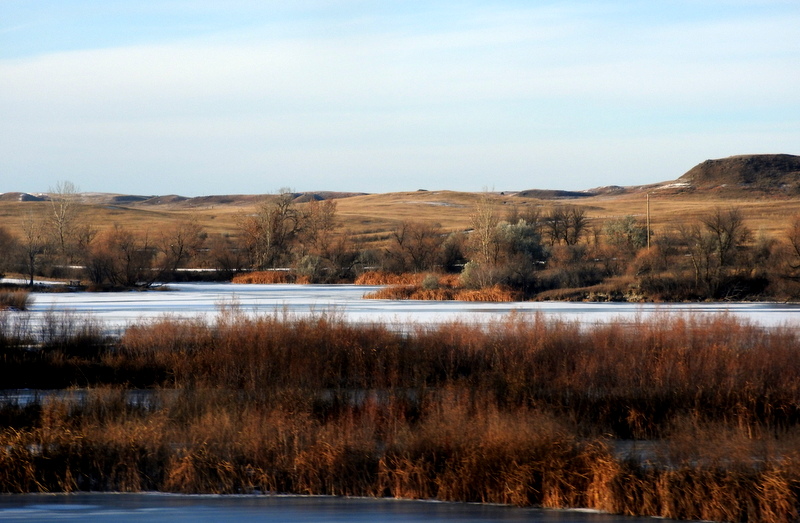 It’s still cold out there in spite of the sunshine. 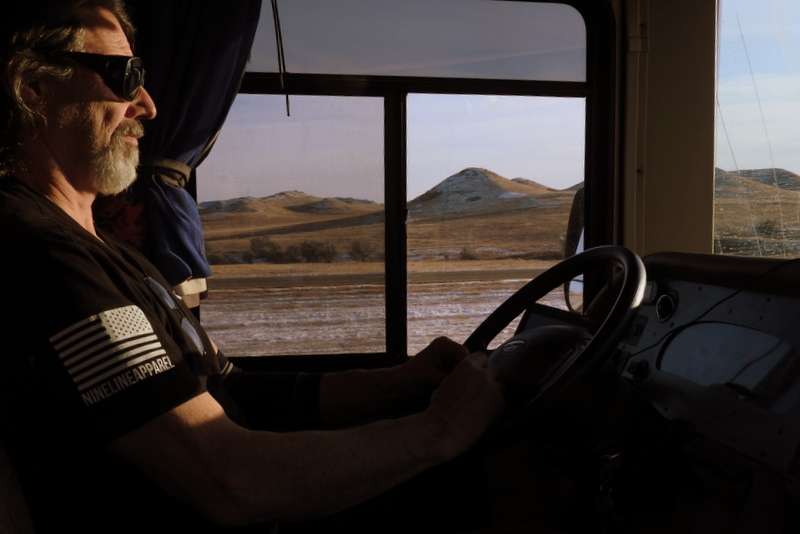 We crossed into Mountain Time today, so we were looking forward to reaching our destination in the daylight!

There is a town near the western border of North Dakota called Home On The Range.  That got us all to singing:

Home, home on the range,

Where the deer and the buffalo play,

Where seldom is heard a discouraging word,

And the skies are not cloudy all day!

I got a great shot of Mom singing, but she wouldn’t let me put it in my blog.  😉 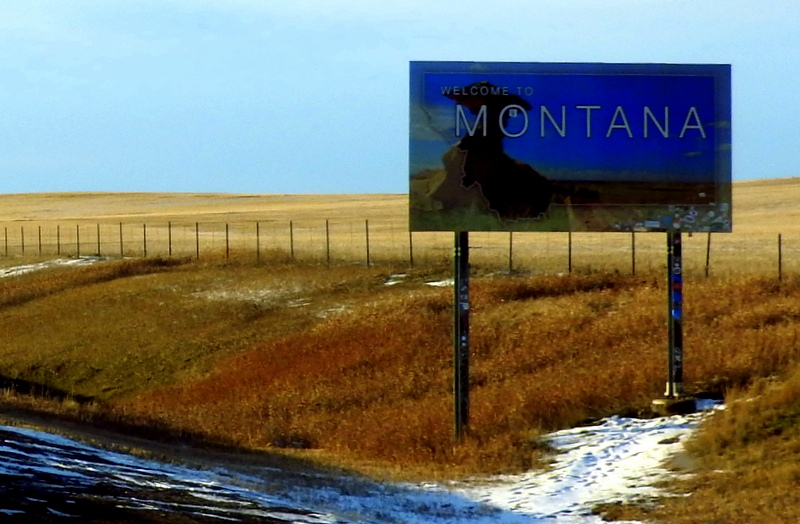 We finally hit Montana. We’ll be in Montana for most of the next two days. It’s a big state! 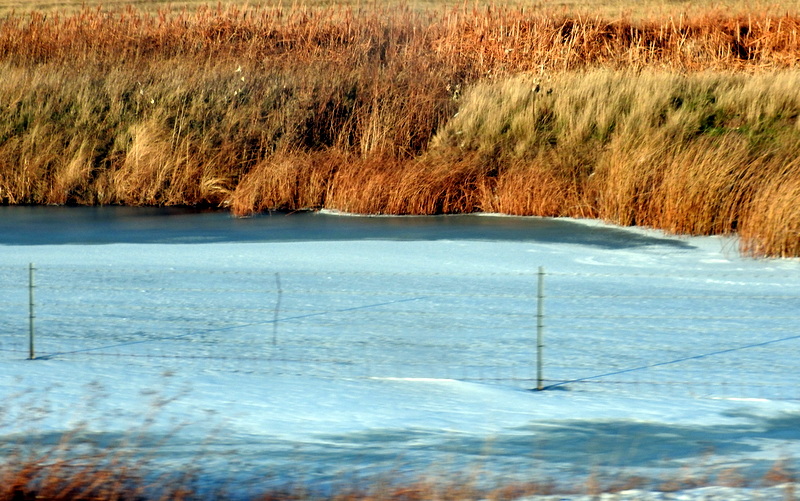 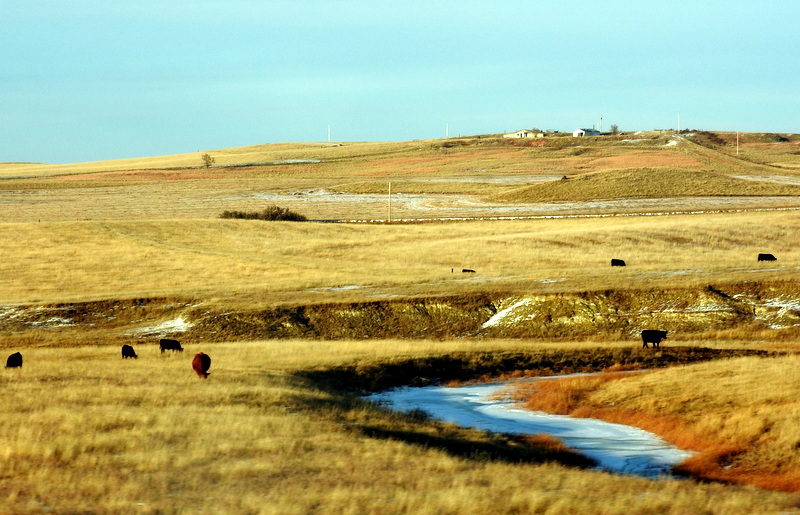 We got to our motel earlier than usual.  Mark had picked up a couple of new thermostats and installed them to try to prevent the water from freezing again tonight.  While he did that, Mom and I played several games of Bananagrams (we call it Banana Scrabble) in the motel room.  There is an interesting thing motels are doing lately.  The last two nights, we’ve had really tall beds. 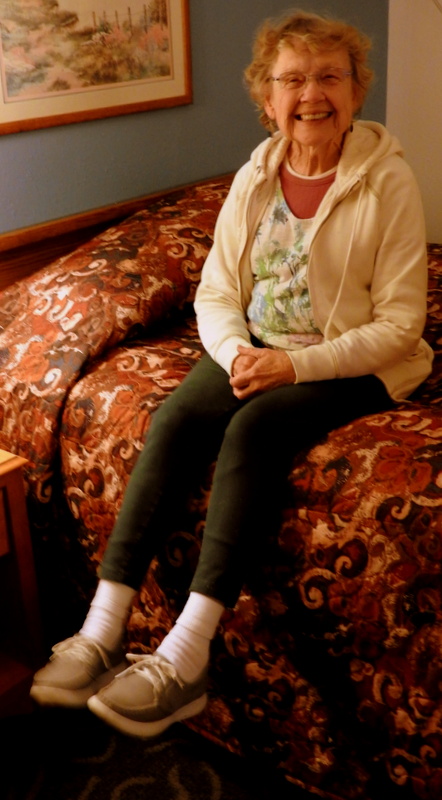 I got this picture of Mom swinging her feet at least six inches off the floor!

Both Mom and Mark are asleep as I write this, so I need to stop here and go to bed.  More tomorrow!