I was kind of worn out yesterday after taking Jamey and Sage to Washington Island.  I had taken a bunch of pictures and fell asleep before I could get them all processed.  Today was less tiring, which I will explain later, but first, pictures from yesterday… 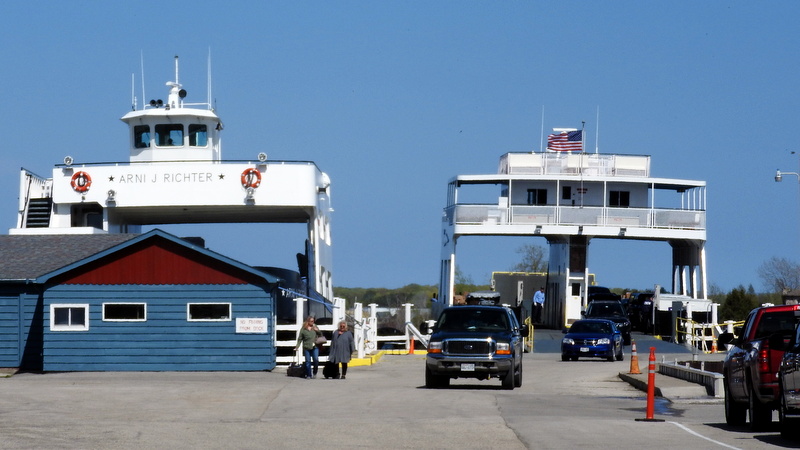 We took the ferry across from Northport to Washington Island. 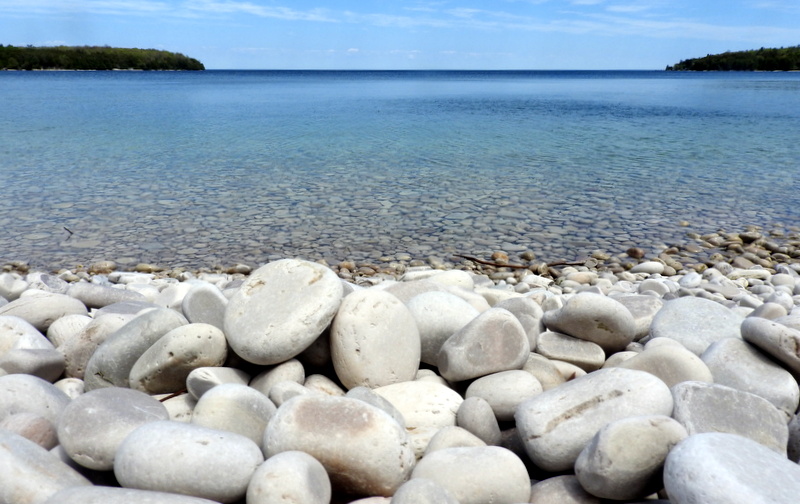 The time Mark and I went to Washington Island the first year we were here, we never made it to Schoolhouse Beach. On this trip, I did! 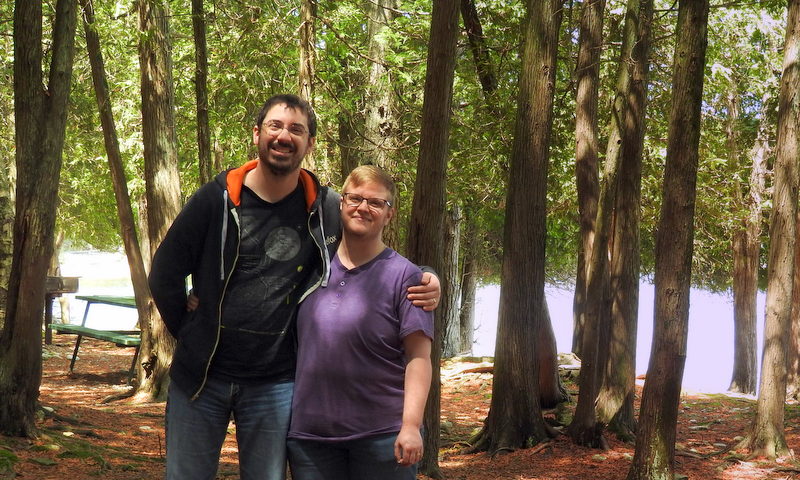 Jamey and Sage at Schoolhouse Beach 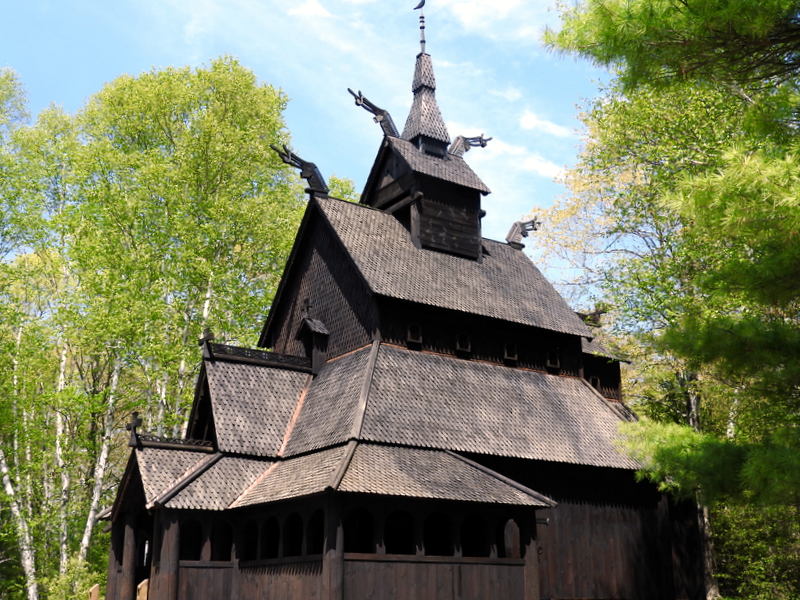 After lunch, Jamey and Sage and I went to the Stavkirke. 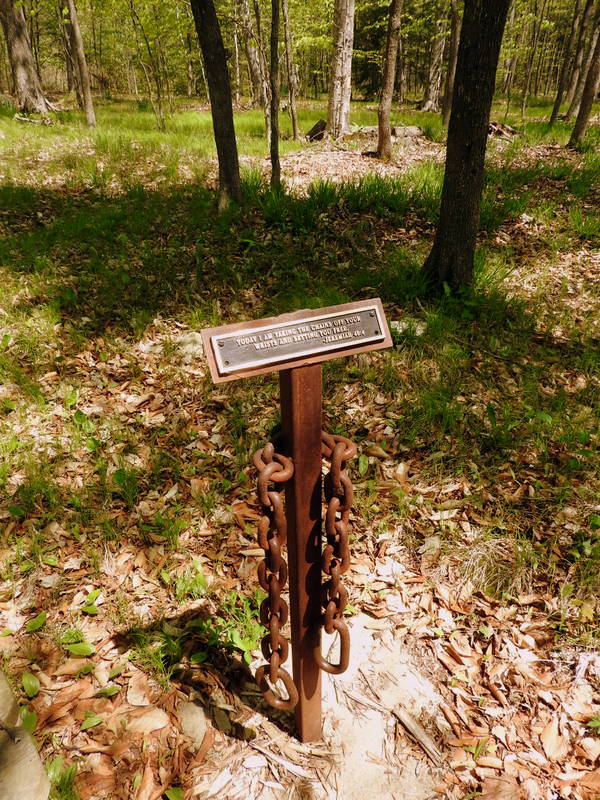 When Mark and I went several years ago, we stopped on the road where we took a contemplative walk through the woods to get to the Stavkirke. This time we found a parking lot with the Stavkirke a few steps away, but I took Jamey down the path to the first station. This is his shot. 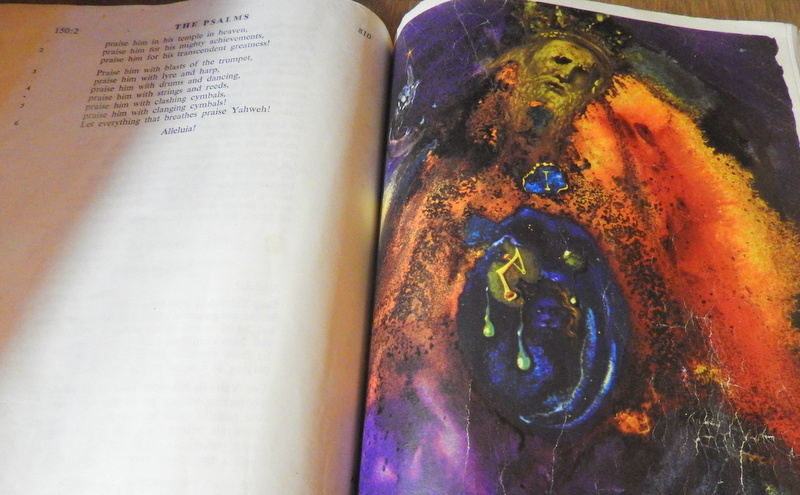 Inside the Stavkirke, this is a Jerusalem Bible illustrated by Salvador Dali.

Our next stop was at Fragrant Isle Lavender Farm.  The lavender wasn’t in bloom yet so I didn’t take any pictures, but we went into the gift shop and I bought a small lavender plant.  I understand they like the sandiest, rockiest, worst soil you can give them.  That would describe my back yard! 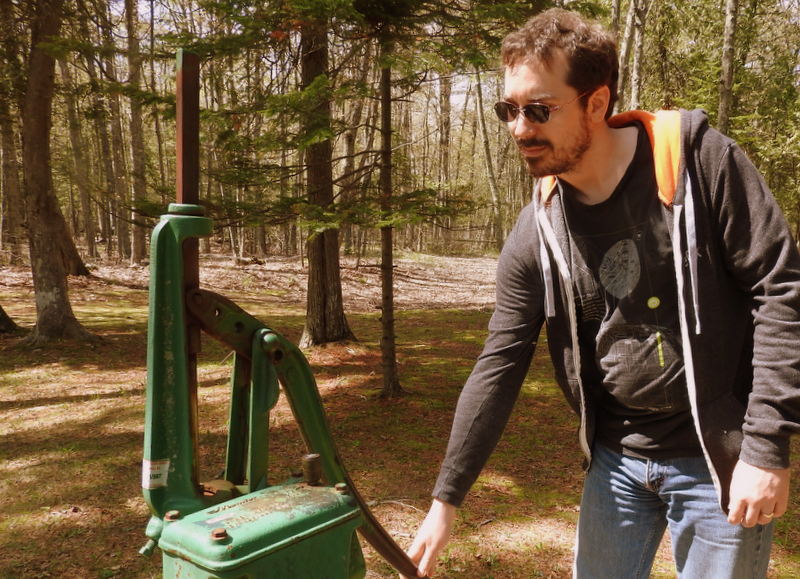 We stopped at another park on our way around the island. Here Jamey is pumping a water pump… 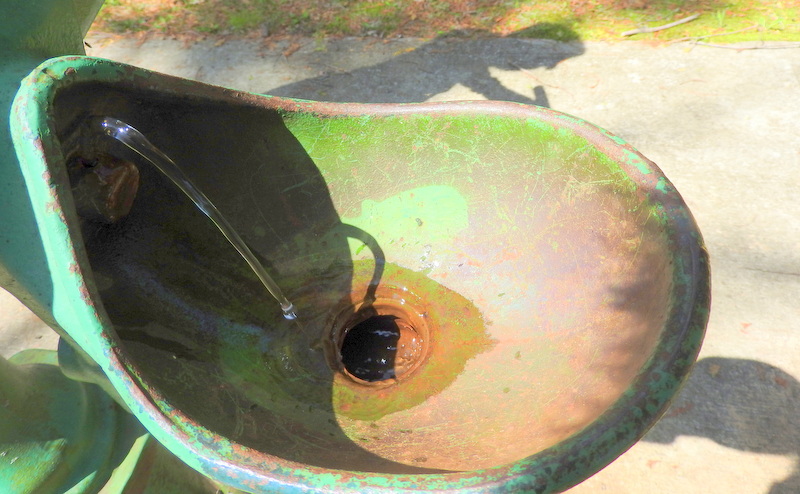 …that draws water for a water fountain.

It didn’t take as long as we had planned to get around the island.  We got back on the ferry and as we were crossing Death’s Door (the name for the passageway between the peninsula and the island), Sage thought “they” saw a rock on the water.  I put my camera lens on telephoto to see what it was. 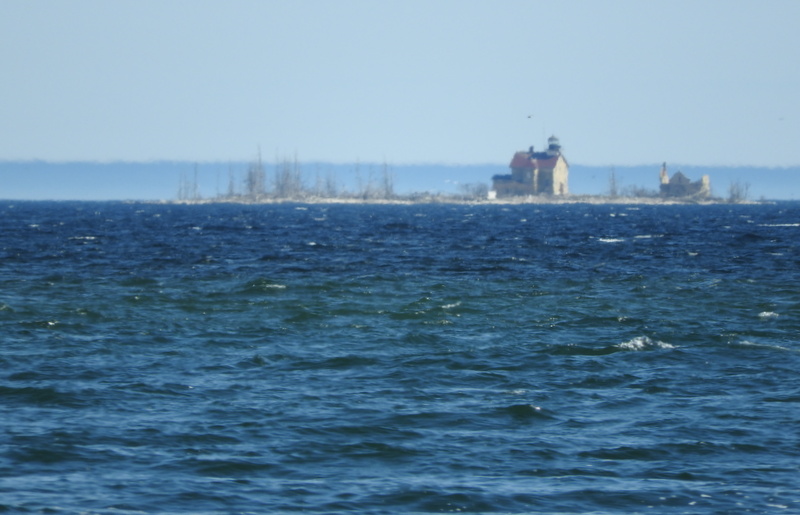 Pilot Island as seen from a very far distance

Pilot Island had a lighthouse and a keeper’s cottage on it until the lighthouse was shut down a number of years ago.  In the ensuing years, it became a cormorant sanctuary.  Unfortunately, as the cormorants sat in the trees and excreted guano, it killed the trees.  The ground on Pilot Island is spongy, odiferous and toxic.  The only people allowed to go out there on occasion have to wear special suits and masks to protect themselves.  The roof on the lighthouse keeper’s cottage (on the right above) caved in.

We separated for the evening and Mark took me out to dinner at a Mexican place.  After dinner, we were looking at all the cherry blossoms and I asked if we could stop so I could get some pictures.  Mark was agreeable. 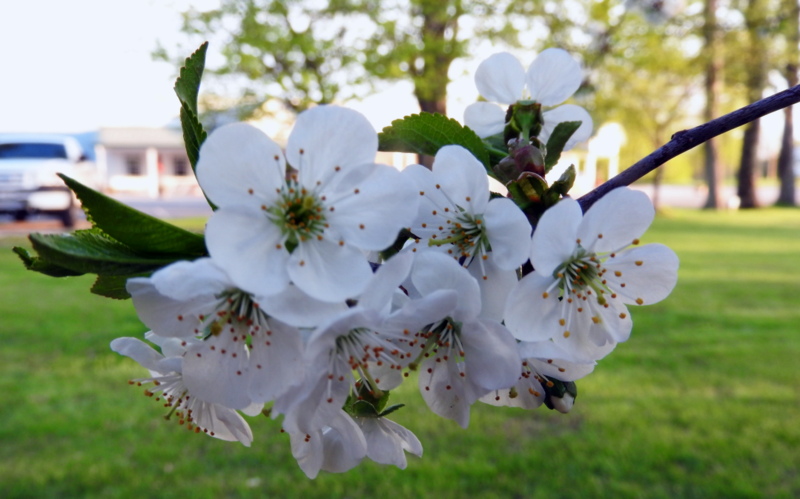 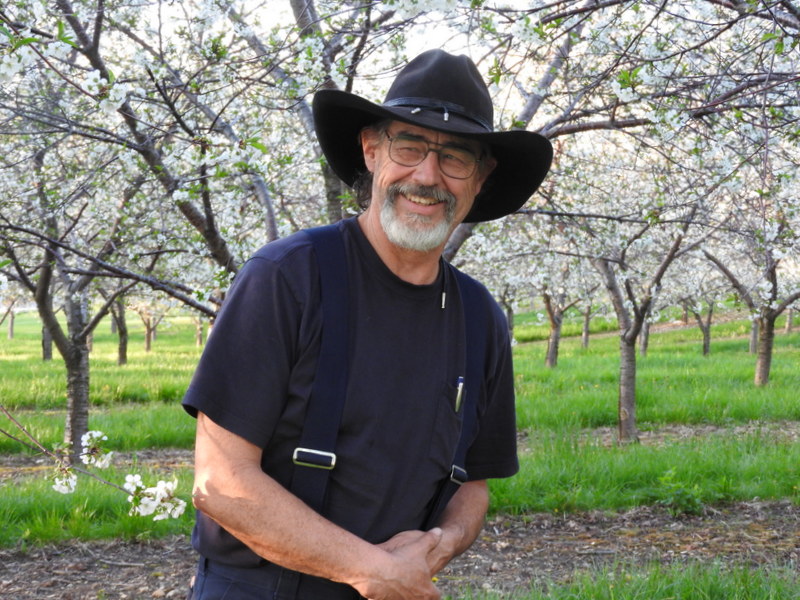 I said something funny and got this great shot of Mark! 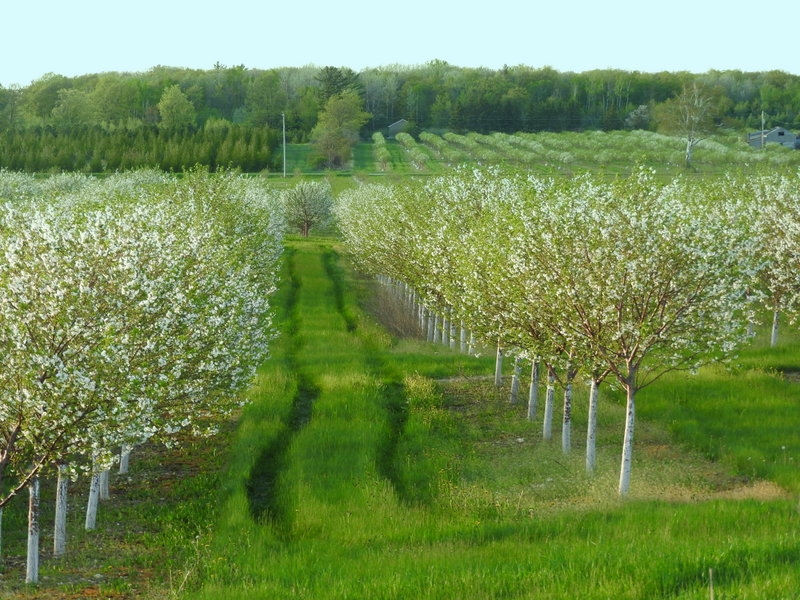 Orchards almost as far as the eye can see.  This is in Ellison Bay.

This morning I woke up with sharp pains in my stomach.  I thought maybe it was something I had eaten last night.  Jamey and Sage came to pick me up and take me down to Sturgeon Bay for an eye appointment.  As my eyes were being examined by the assistant, I had to excuse myself for a moment and I went into the bathroom and lost my breakfast.  I felt a bit better afterward, although quite chilled, so I thought I had gotten rid of whatever the problem was.  When the eye doctor came in to test my eyesight, he entered a door at the far end of the room and asked if I wanted to go home and come back another time.  I told him I thought it was just something I had eaten and that I was feeling better, so he proceeded with his exam.

After my appointment, Jamey and Sage and I went to a small astronomical observatory.  The observatory was closed and wouldn’t open until 2:00, but we wandered around the grounds a bit.  I had left my camera at home so I wasn’t able to take pictures.  After lunch, where I ate lightly, we went to the University Extension Test Garden and wandered around there for a few minutes before heading back to my place.  Jamey and Sage were going to go to the cottage they are renting and rest up and then we talked about meeting for dinner at 6:00.

After they left, my skin started to feel prickly, my joints ached, and I had a headache.  I had no energy and I was chilled.  Mark came home at 5:00 to get ready for dinner, but he looked at me and could tell I wasn’t well.  He got the thermometer and took my temperature and it was 100.4°.  I had to call Jamey and tell him I wouldn’t be able to make it for dinner but suggested he and Sage go to the restaurant we had talked about meeting at.  Mark asked what I wanted for dinner, and I suggested bananas, rice, applesauce, and toast — the BRAT diet for upset stomachs.  He went to the store to get those things.  By the time he got back, I was laying on the couch on the verge of sleep, so he sat in the easy chair and we and the critters all took a nap.  When I woke up, Mark took my temperature again and it was 99.3°, so I’m hopeful this is just a twenty-four-hour bug.  I had a banana and rice for dinner and applesauce for dessert.  I’m feeling better; not back to normal yet, but better.  I just feel bad that I exposed so many people today to whatever this is.

While I went to my eye appointment this morning, Mark stayed home waiting for the delivery of our new bathtub.  It came in a box, so when I was able to get up again, we went out to open the box. 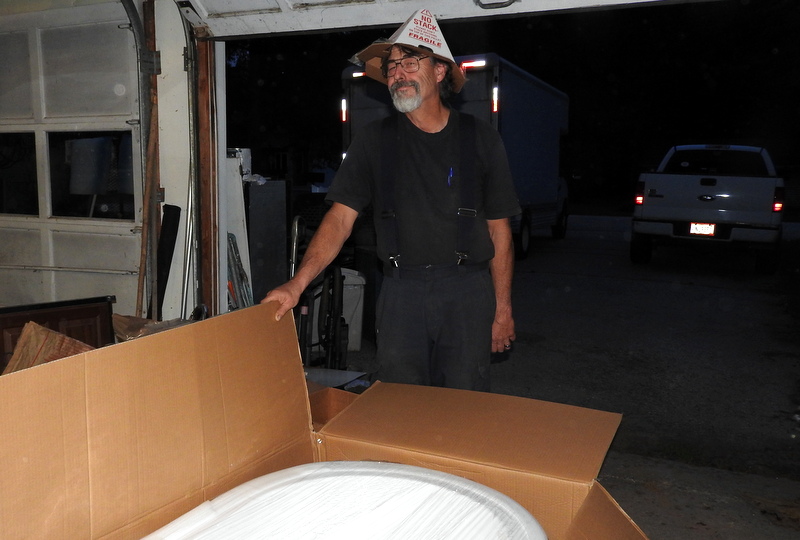 There was a cardboard cone on top of the box to keep people from setting anything on top, so Mark put it on his head for fun. 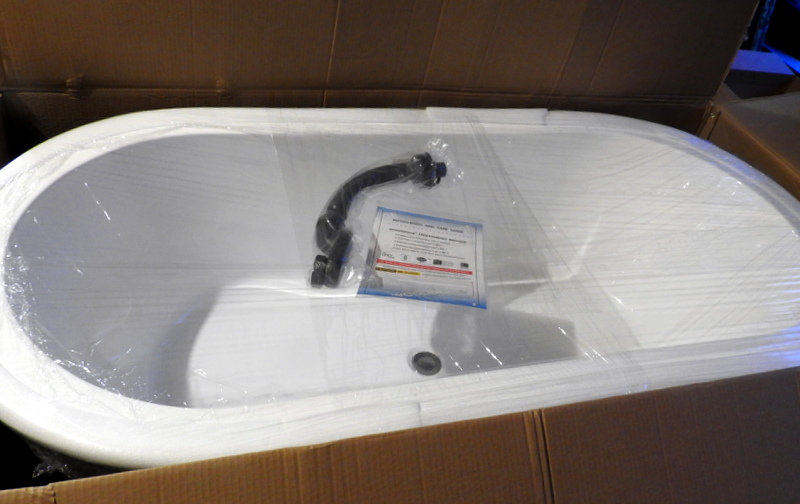 Before we can put it in, Mark needs to finish hooking up the water softener and filter.  Then we need to knock out the current wall at the end of our shower, take the old tub out, build a new wall, and get this tub installed.  We can hardly wait!