I haven’t written since Mark got home last Thursday, so let’s just say first of all that Mark and Tucson got home safely.  Tucson hasn’t been feeling well the last couple of days, but her nose is still cold and wet so we’re assuming it was something she ate.

While Mark was at work today, I started taking up the pressed wood floor.  Mark had already taken a small square of it out last year when we found it was soft and wet.  We were hoping that was most of the extent of it.  Unfortunately, it was not. 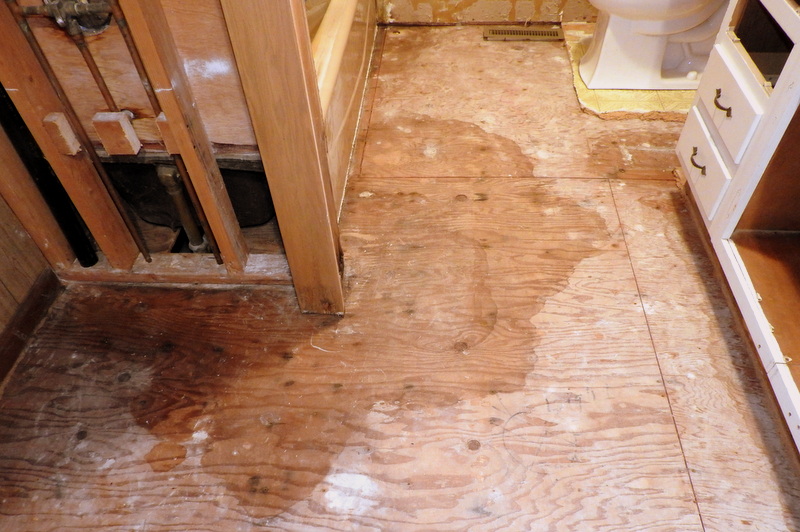 Down to the bottom plywood

If you look closely in the above picture, you will see what appears to be a wet spot on top of a wet spot.  There is a slightly darker line around this end of the tub.  We had hopes that that would be all we’d find, but as you can see, the water damage is quite extensive.  Not only was the plywood under the pressed wood stained by the water, but we still found some of what we were taking out was wet.  This could indicate that whatever caused the problem in the first place is still leaking.

You can also see that the area around the tub isn’t the only place with water damage.  At the end of the sink vanity, there is a damp spot too.  When we got home this spring, we found that the P trap under the sink had cracked due to the extreme cold here, but we didn’t discover it until we had washed our hands a few times.  Maybe that’s what that wetness is about, but I kind of doubt it.  We were aware of the leak and mopped it up with towels.  The water at that time was coming out of the front of the vanity.  So what is this spot at the far end? 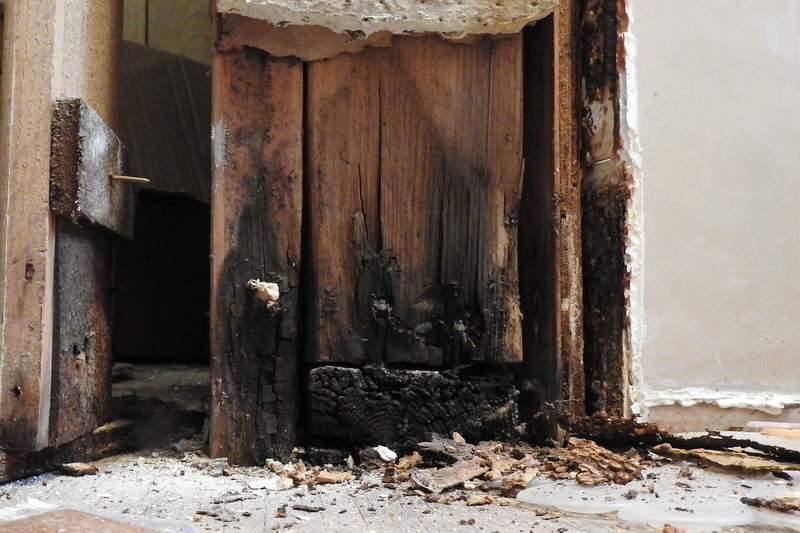 This view is of the framework behind the shower and tub faucet wall.  This wood is so damaged I’m not sure how it’s still holding the upright board up.  I think I’m really glad that we started this remodeling project when we did.  It must have been a God-thing!

Meanwhile, Mark is opening up the utility room wall to try to have enough room to get the old boiler and water softener out. 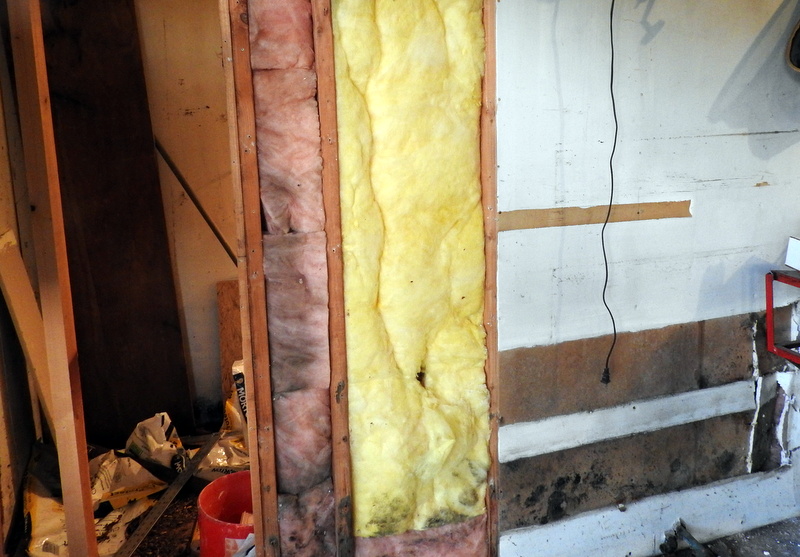 Initially, this hole was as much as he wanted to open up so that he could put a door back in its place.

The two unpainted areas on the right are where there were a couple more of those wall registers that must have been heating the garage up when the boiler was working.  The wall behind the unpainted areas has black mold, and even the insulation behind it looks like it got moldy. 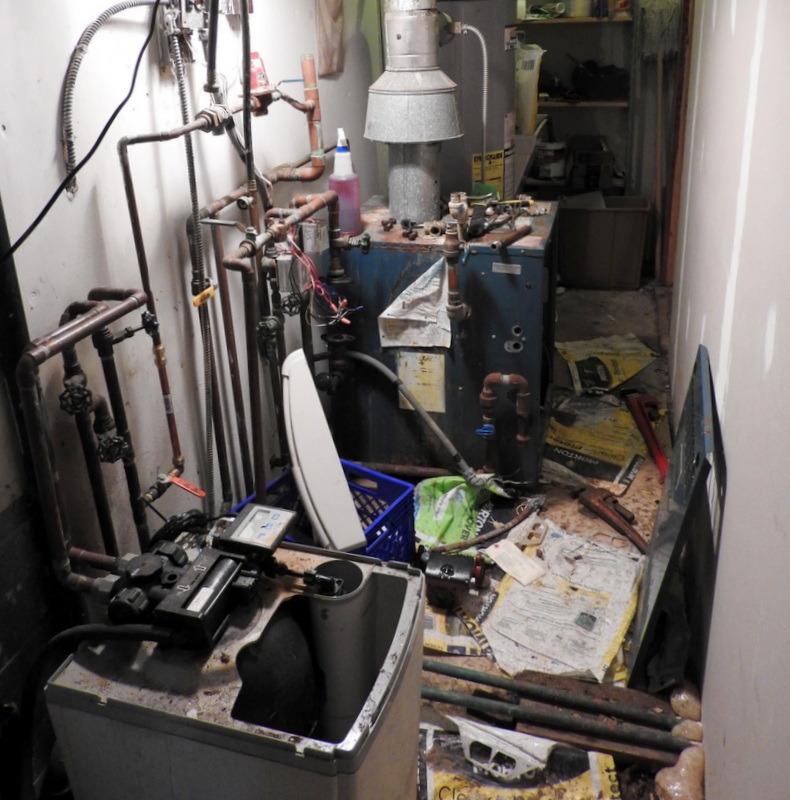 Looking through the opening, the defunct water softener is in the foreground and the broken boiler is beyond it.  Take note of all the pipes in the wall. 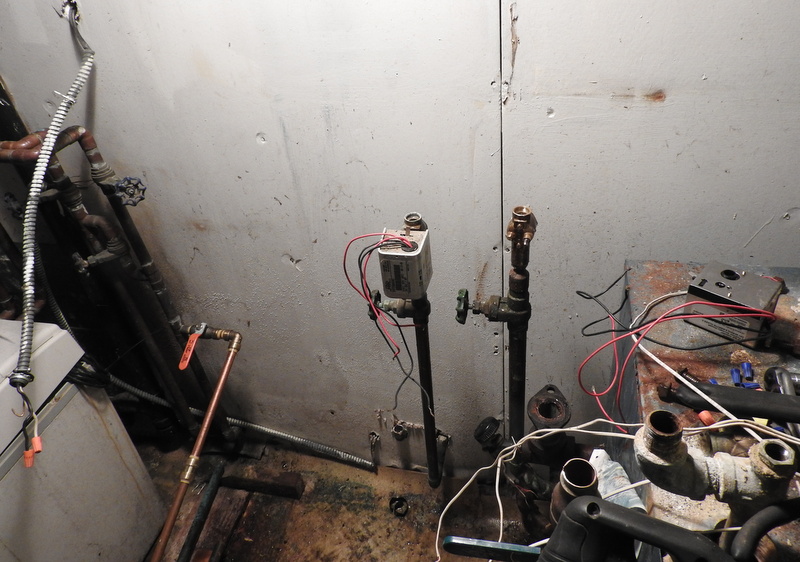 This picture was taken later from the boiler side looking toward the water softener.

Mark is trying to trace which pipes go to what and he was able to cut a bunch of them out.  We still have a propane pipe that went to the boiler, but Mark says that he has to take special precautions with that.  He’s going to turn the propane to the house off and then turn the stove on in the kitchen to bleed off what propane is still in the pipes.  Then he should be able to cut the pipe off that goes to the boiler and plug it so that he can dismantle the boiler and get it out of there.

I have a prayer request.  I got a call from my pastor today.  Her doctor just told her she has a cancerous lump in her breast and she has to go in for a needle biopsy on Thursday.  Please pray for Nancy and her husband, Dave, as they await the biopsy and its results.  She’s still in a little bit of shock and she needs to adjust to this news and figure out how to deal with it.