It was 15° F when we got up this morning, but there was some sunshine, so we were encouraged.  We had hoped to make it to at least Missoula, MT by tonight. 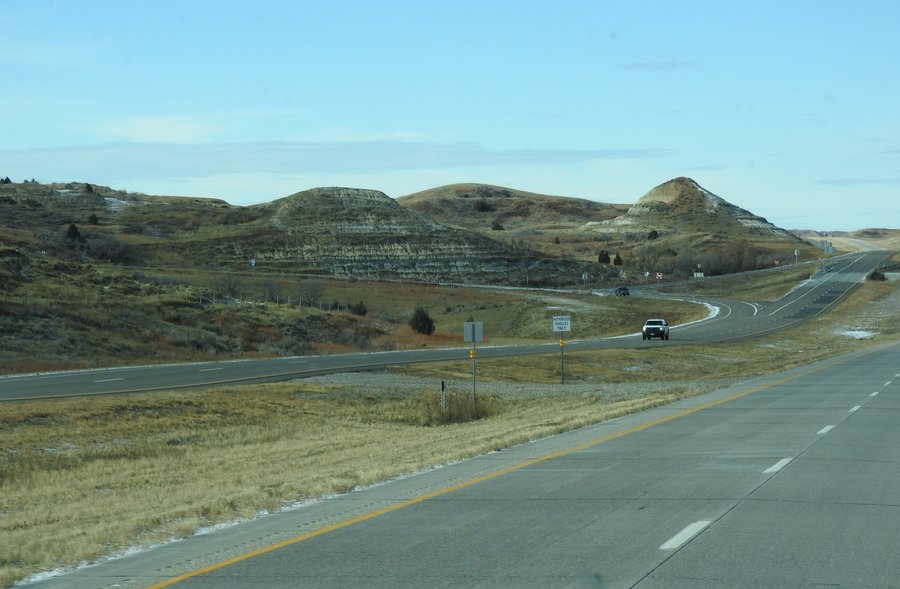 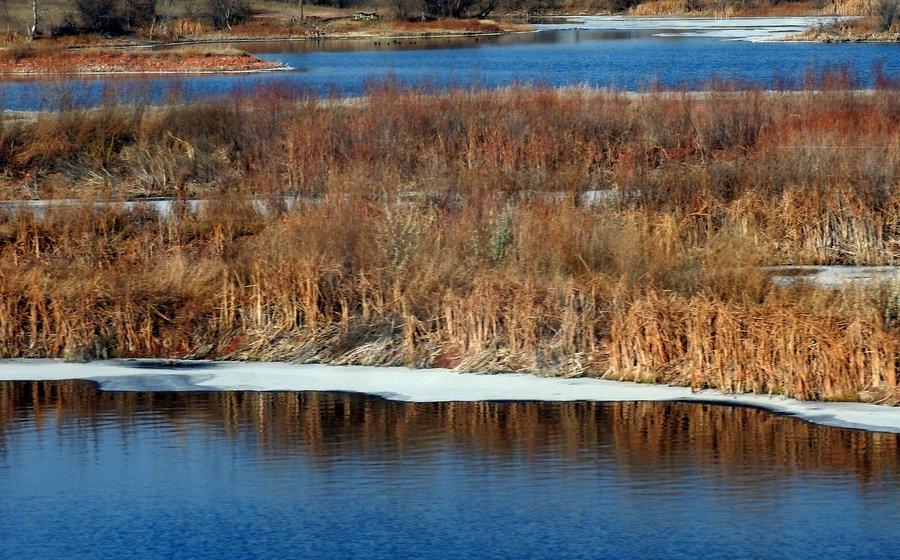 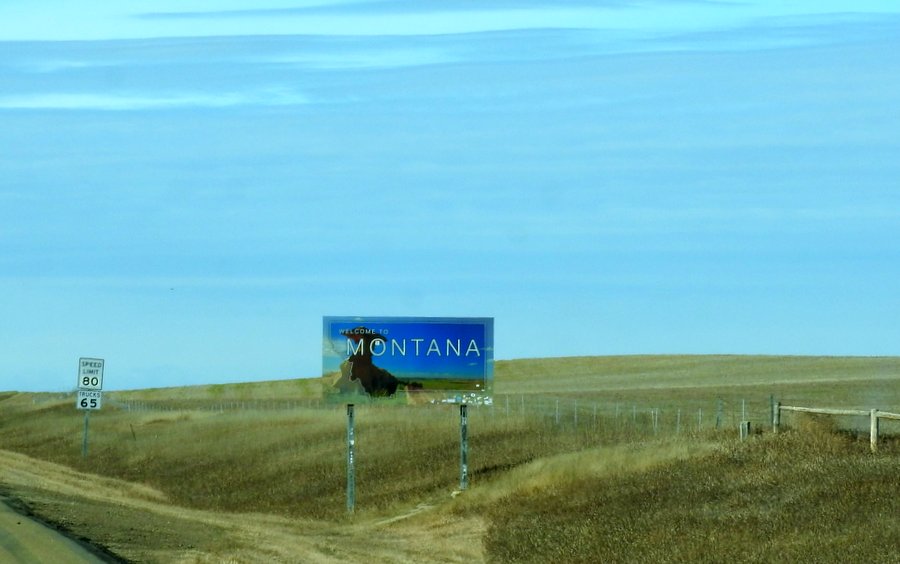 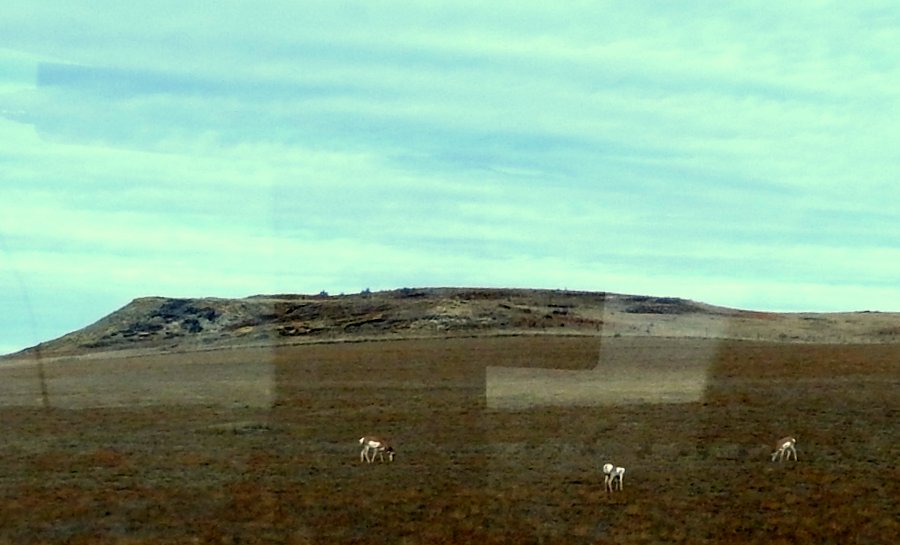 Home, home on the range,
Where the deer and the antelope play… 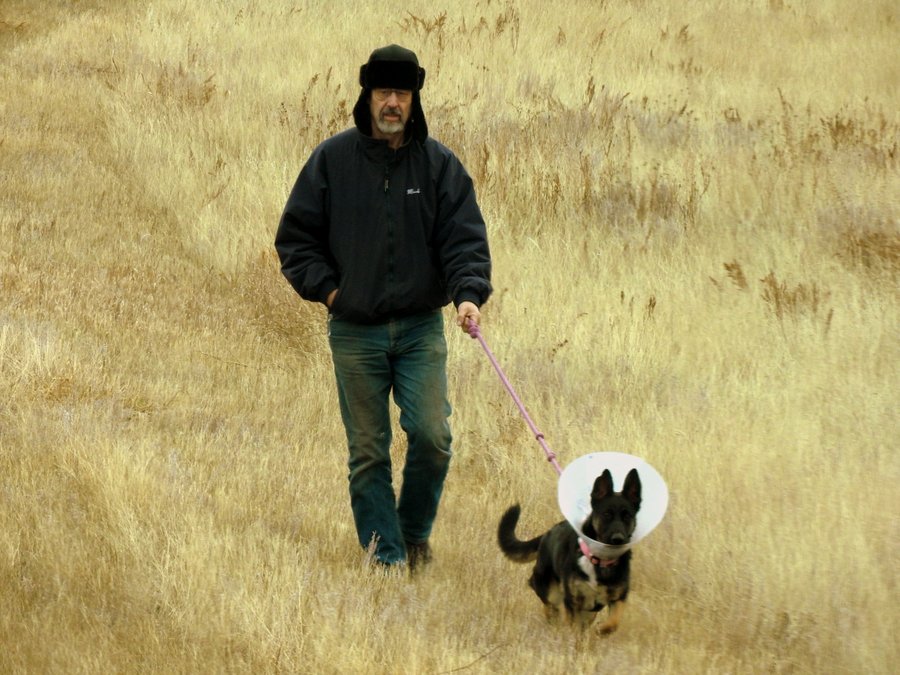 There is a story behind the above picture of Mark taking Tucson for a walk.  I was anticipating getting a conference call at around 12:00 noon for a job interview in Oregon.  (We crossed into Mountain Time today.)  We were approaching that time of day and there was no place to stop so that it would be quieter in the RV for my call.  Mark pulled off on a little off-ramp (with no services) and crossed the street to the on-ramp where he pulled over on the shoulder.  He left the RV running so I could still have some heat, and we waited.

Mark’s cell phone rang, but in my haste, I accidentally hung up instead of answering it because I wasn’t used to how his phone works.  I waited a couple minutes, but it didn’t seem like they were going to call back, so I called Sock It To Me and explained to the receptionist that HR was waiting to have an interview with me.  The receptionist put me on hold for a moment and when she came back on, she told me they had to call me to make the conference call work, so I hung up and waited.  Mark said a prayer for me.

When they finally returned my call, the reception wasn’t very clear, but I did my best to answer their questions.  They asked why I am interested in working for them.  I told them that I’ve always wanted to buy handfuls of their socks whenever I see them in the store, and I said I have kind of a thing about socks.  Mark made a comment off to the side about my love for socks, and I laughed and reported that to them.  Once Mark was certain the conversation was going well, he took Tucson out for a walk until I waved to let him know the interview was over.  I was a little disappointed, thinking that I hadn’t really shined, but Mark said that from what he had heard, it sounded like I had done a great job.  They will be calling at the end of this week to let me know if I’m hired or not.  I hope I get the job.  I liked everything I heard! 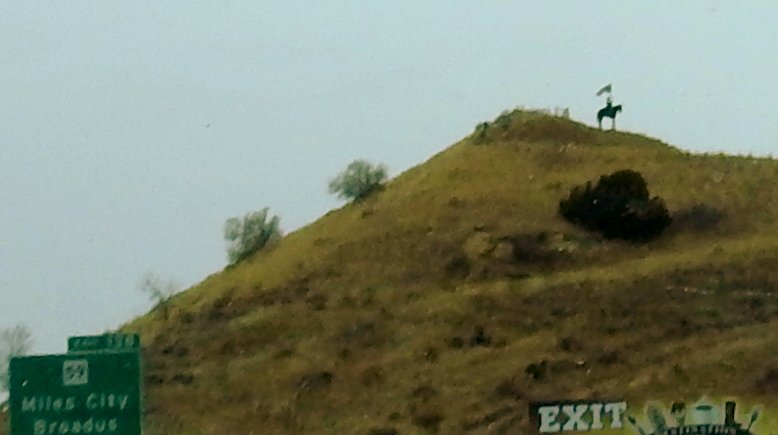 Some sort of statue at the top of this hill 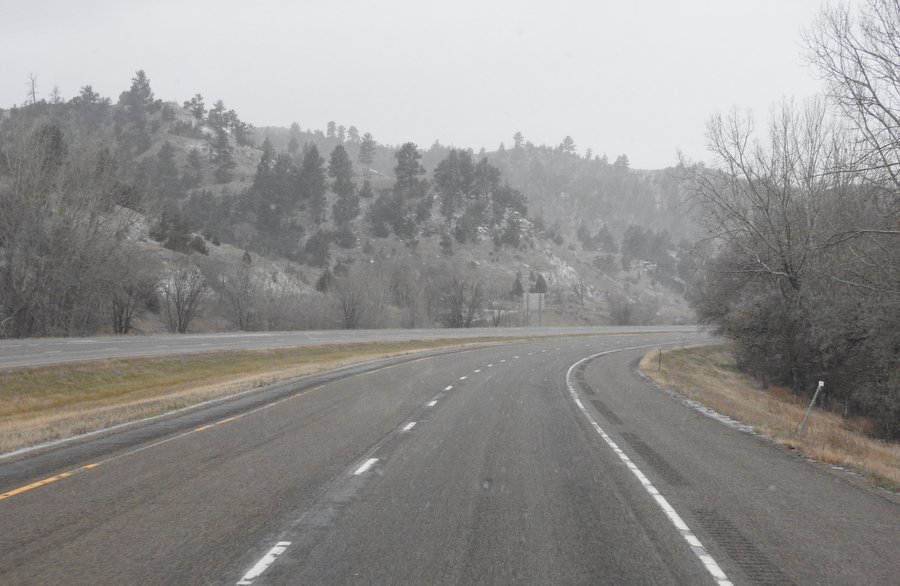 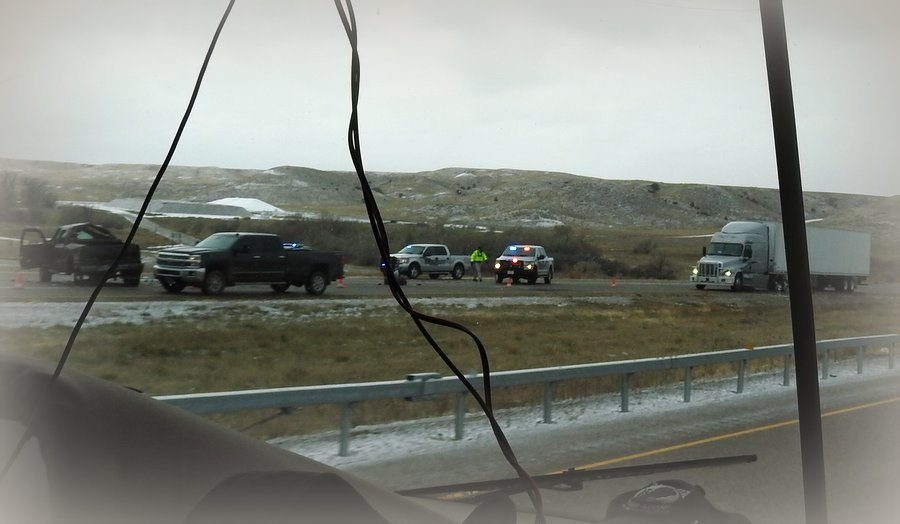 It looked like some sort of accident in the east-bound lanes. I was so glad it wasn’t on our side. 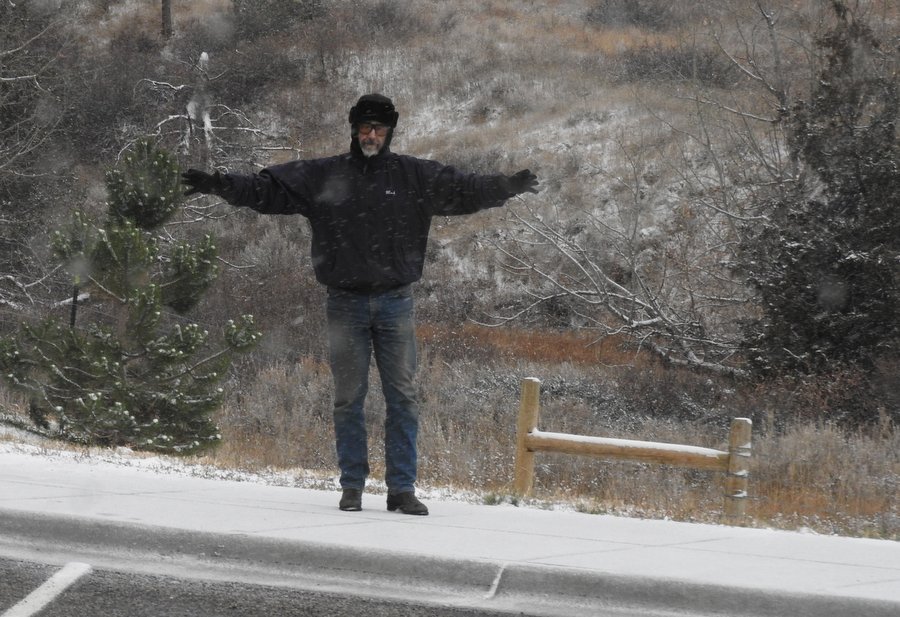 We stopped at a rest stop and Mark slid down the sidewalk. 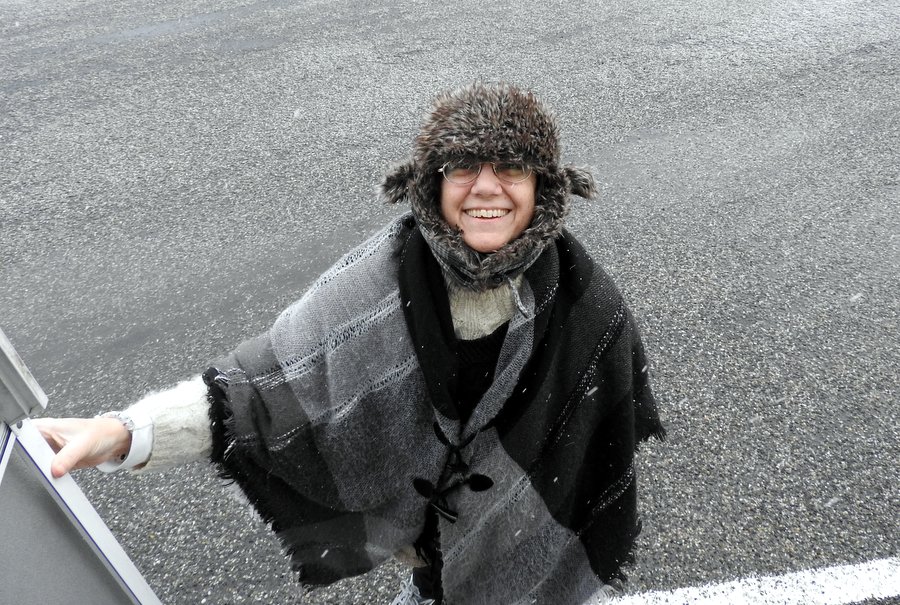 He got a shot of me coming into the RV. I’m wearing long-johns, a wool sweater, and two shawls! Not to mention my crazy hat. 🙂 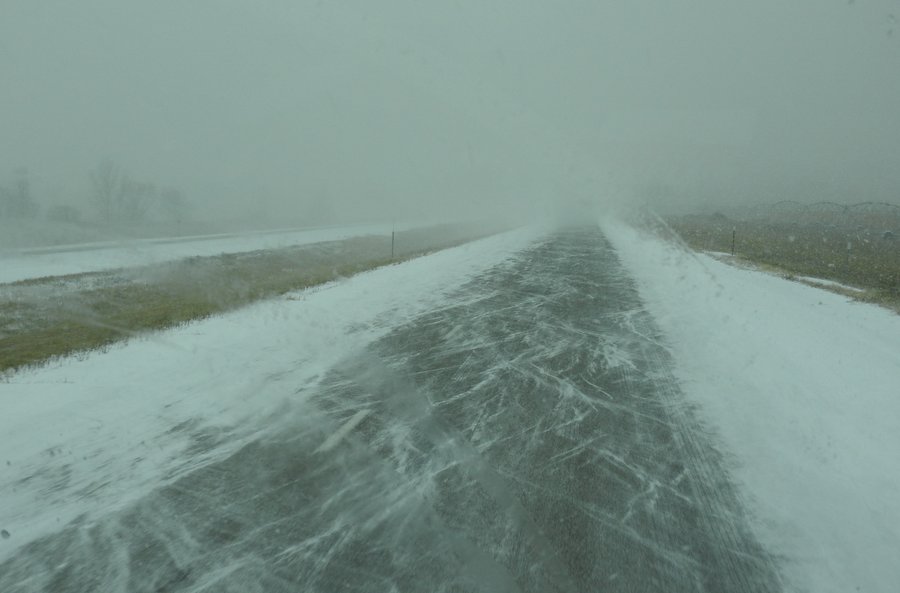 The snow was blowing across the highway 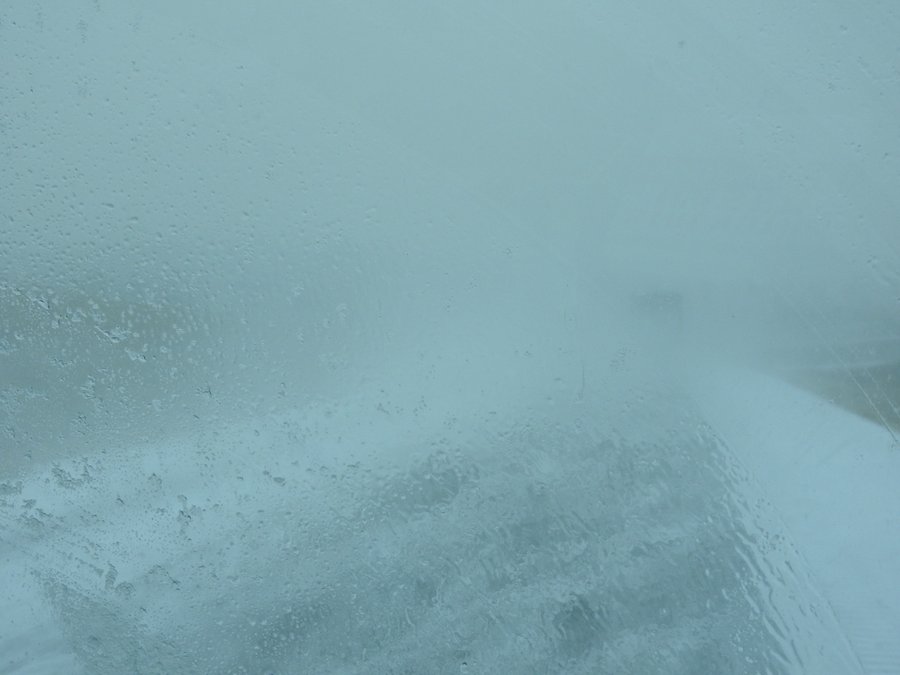 Mark was being very cautious since we don’t have chains or snow tires on the RV.  He was going about 45 miles an hour and traffic kept passing him, but every time they did, they made visibility really difficult. 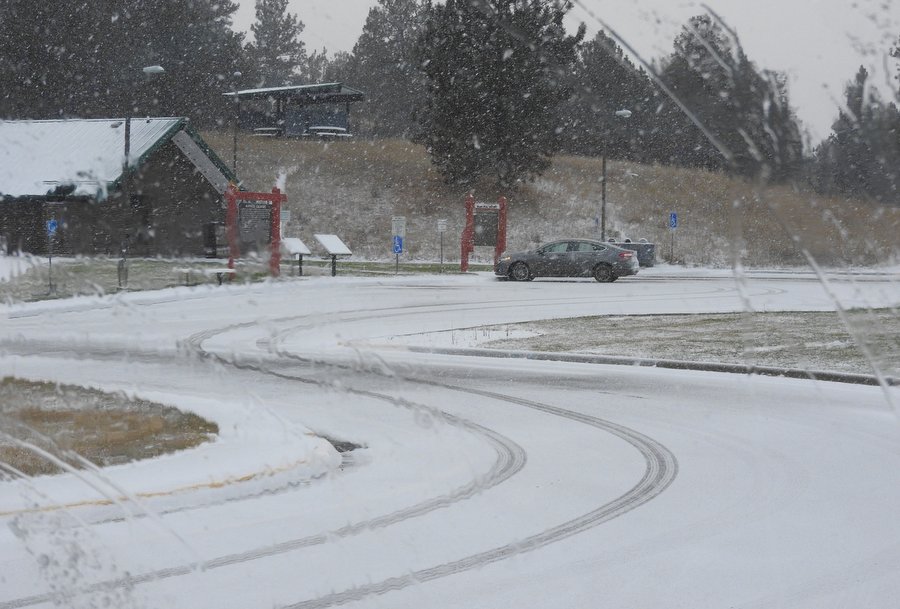 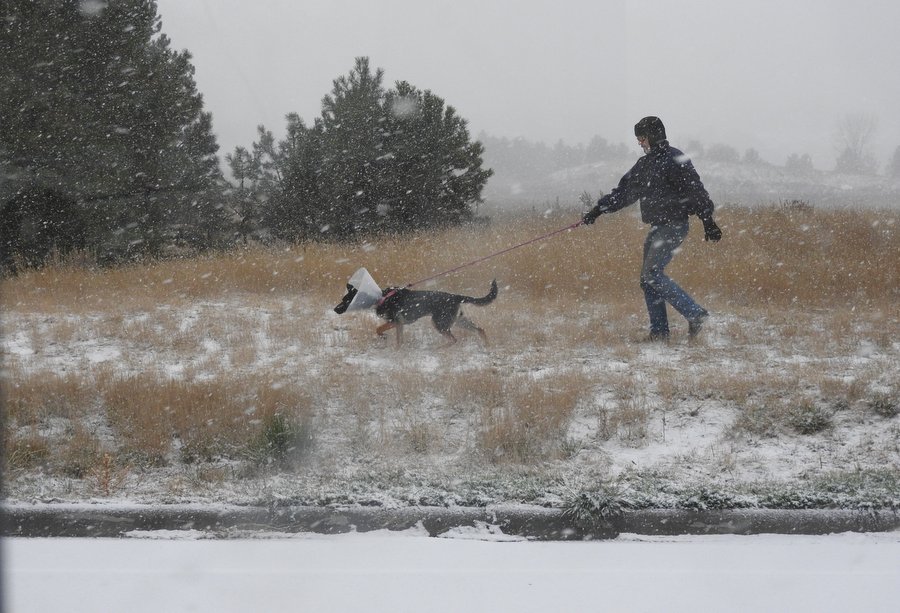 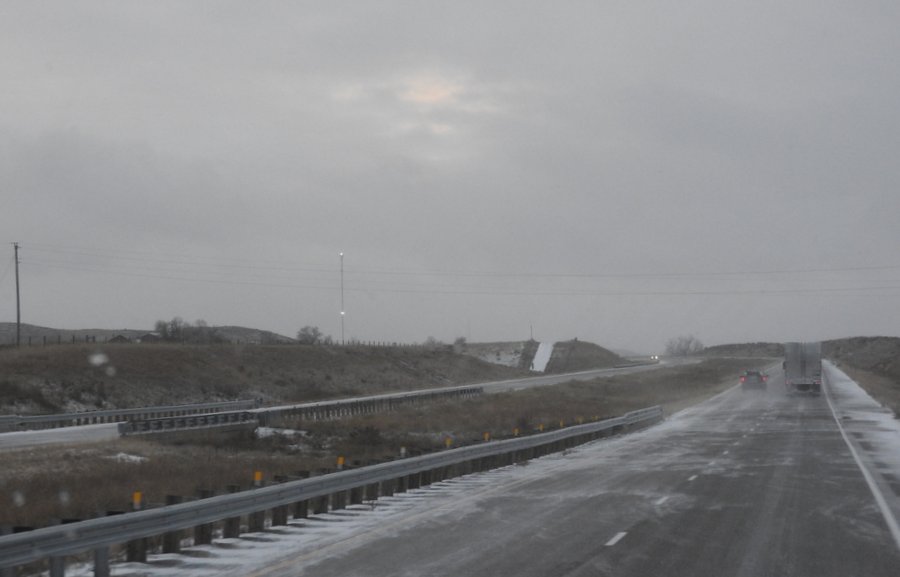 A hole in the clouds!

We stopped at the junction of I-94 and I-90 for gas.  We stopped at a truck stop for gas with the hopes of being able to take a shower.  However, the roads were becoming icy and we decided we needed to head on to Billings, four miles away, and stop for the night.  In spite of the snow storm, we got better gas mileage today because there was not much wind.

Tomorrow, we will be traveling on I-90.  Weather reports are calling for slightly warmer temperatures and more sunshine.  Low chance of moisture.  Maybe we can make it as far as Spokane, WA.  I thank God for His answer to all your prayers for us.  We are safe and should reach our final destination by Friday evening in spite of the setbacks we’ve had with the weather!