OK, so Mark and I were talking about things today and he says we probably could have left by Sunday except that we need to stop in Green Bay to pick up a part so the RV furnace will work, and the supplier won’t be open on Sunday.  It’s looking like we won’t be leaving Door County until Monday.

Mark continued to spend the day working on the RV.  Last spring, he had figured he would spend one hour a day working on the RV, but he was so busy this season that it was not uncommon for him to come home exhausted around seven or eight o’clock PM.  There were even occasional mornings when he had to get up before the sun to go to Green Bay for one thing or another.  It’s been kind of like the cobbler whose children have no shoes.  He’s having to spend this time repairing the RV.

I, on the other hand, have barely felt motivated to do anything.  I could be cleaning the house and RV and packing, but I sit here and look around, at a loss for what I should be doing.

I know that probably a big part of this is the realization that Sherill won’t be in Portland to greet us when we get there.  I was telling Mark this at dinner tonight and I started crying.  I have plenty of other family in the area that I want to see, but there’s something about parking next to the house Sherill lived in and knowing that we won’t be having late night conversations with lots of laughter and there will be no more Saturday night chick flicks.  I have been aware for the last couple weeks that I’ve been feeling kind of low.  I guess when I was still working, I didn’t really have time to process my grief and it’s all hitting now when I need to be most motivated to get going.

I do have things to look forward to.  I have had several emails today from Sock It To Me.  They are willing to interview me by telephone conference on the 7th, so it sounds as though they are fairly interested in me.  I am hoping I will be able to have Wednesday mornings off so I can join the quilt group at my church in Portland again.  I have joined the quilt guild here, but they have meetings and demonstrations.  They don’t really quilt together except for that one workshop I mentioned a couple weeks ago.  So that’s something I can look forward to.  And of course, there are the holidays with my family.

It’s just that I don’t know if Fred is going to want to have a Christmas tree this year, and Sherill took so much delight in watching me set one up for her every year.  She wasn’t able to do more than hang a few ornaments herself, but she would sit back and tell me if the tree was crooked in the stand or if the lights weren’t strung equally on the tree or where I needed to put another ornament.  Then we’d turn all but the Christmas lights off and listen to Christmas music.  She was so much fun to be with for the holidays.  Here’s a picture of her and Fred from last year: 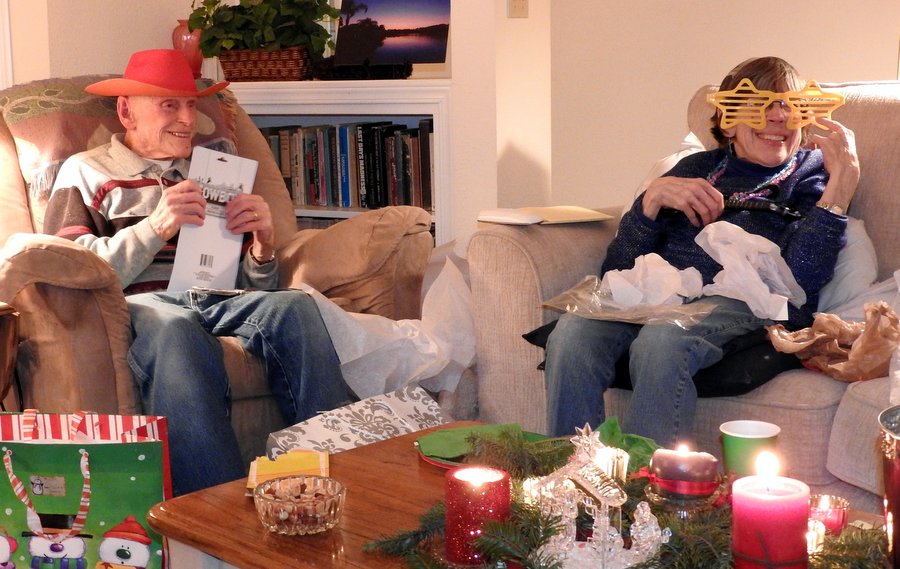