Yesterday (July 4th), Mark and I worked so hard that I wasn’t up to writing last night, but I have pictures to show how we spent our day off work. 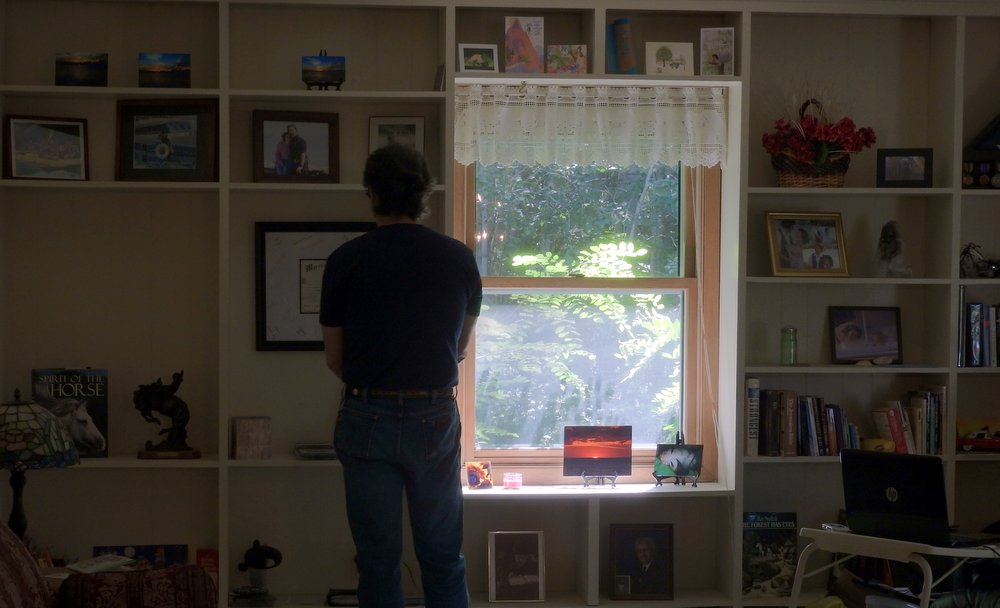 I put “The Battle Hymn of the Republic” on in the morning and Mark stood there enjoying it. 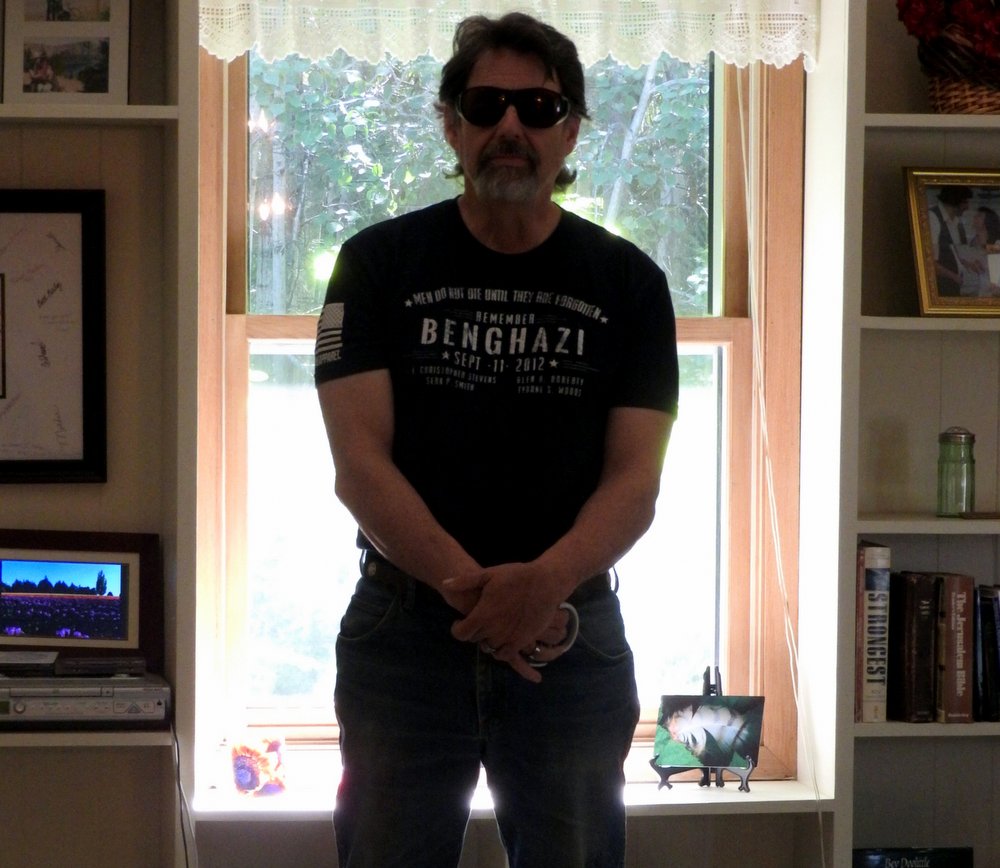 Then he turned around to reveal how cool he is!

I got caught up on some housework, and in the process, discovered where all the moths have been coming from in our house.  I ended up throwing out all our rice, flour, pancake mix and oatmeal just to be on the safe side.  🙁

I went over to Liuda’s house (rhymes with Buddha) to help her with her English.  I took a McGuffey’s Primer with me and asked if she could read English.  She told me she doesn’t read it very well because the language she studied besides her native Russian was German.  However, she did great.  The Primer started with words like “cat” and “rat” and got successively harder, but she kept up with it.  I left the book with her because we only got part way through it, and I also told her that she needs to sit with the English speakers at work if there are any in the break room when she takes her lunch.  My goal is to help her integrate so she isn’t so isolated there.  That was what I first noticed about her at work.  She kept to herself and the others let her because they believed they couldn’t communicate with her.  One day, I intentionally sat at her table and made an attempt to talk with her and found that she has a device that can translate back and forth.  She has been studying English on the computer but is not yet to the point of being able to say more than a few standard phrases.  I figure the best way for her to learn is to try to interact with others.  I’m confident she’ll get there.

When I came home, Mark was working on our back deck.  We had known there was an issue with the part behind the garage last fall when we came to look at the house, but shortly after we moved in, the situation became dangerous and I was afraid someone would fall through and hurt themselves. 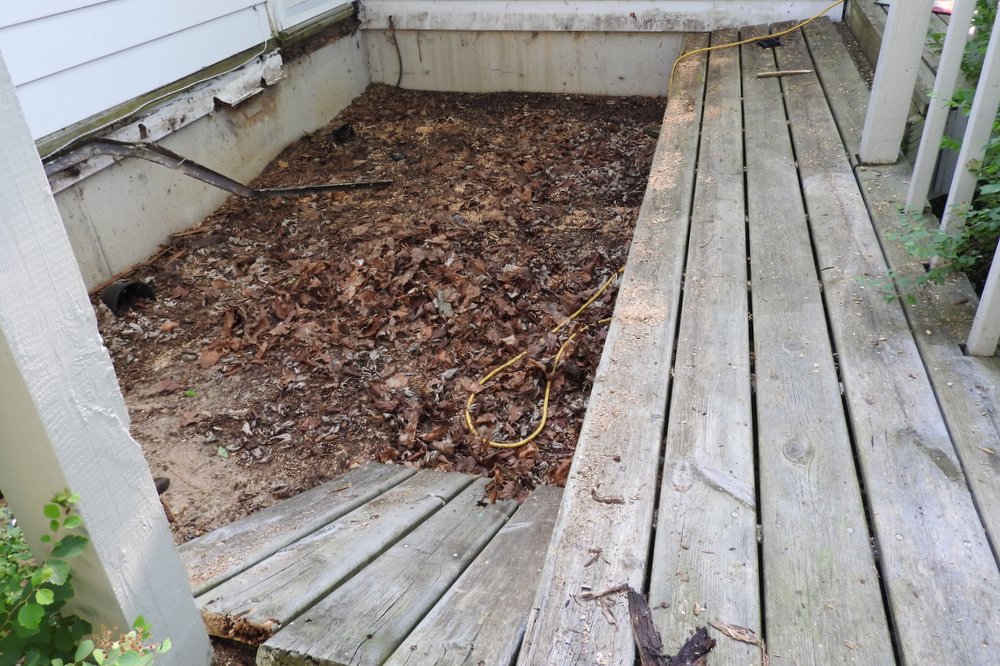 From this angle, you can see that the part to the right is bowed downward. 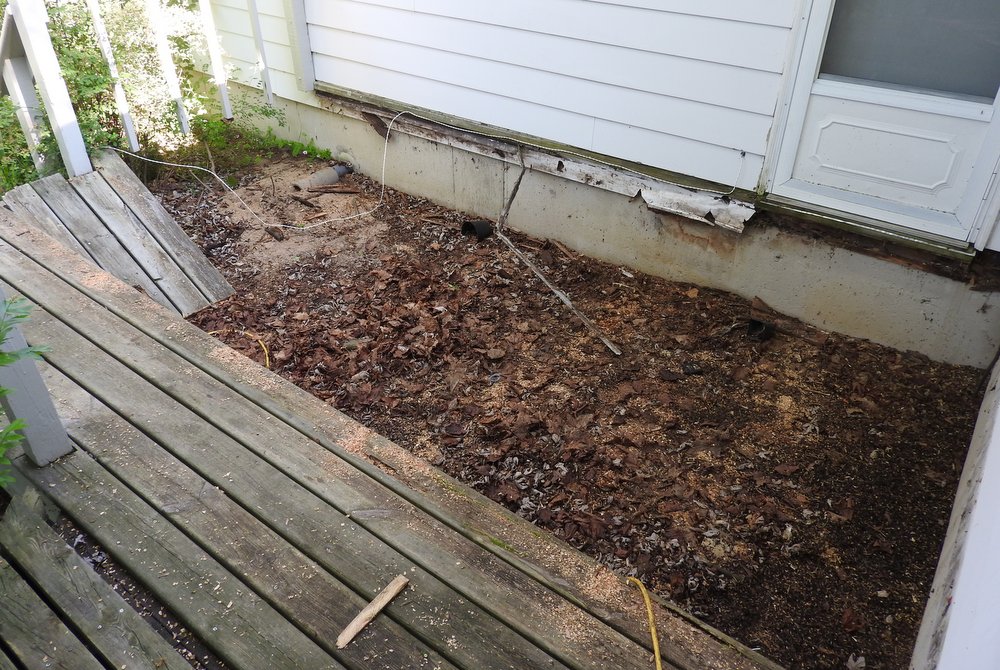 Looking across, you can see where the part that was attached to the back of the garage wasn’t at all secure. 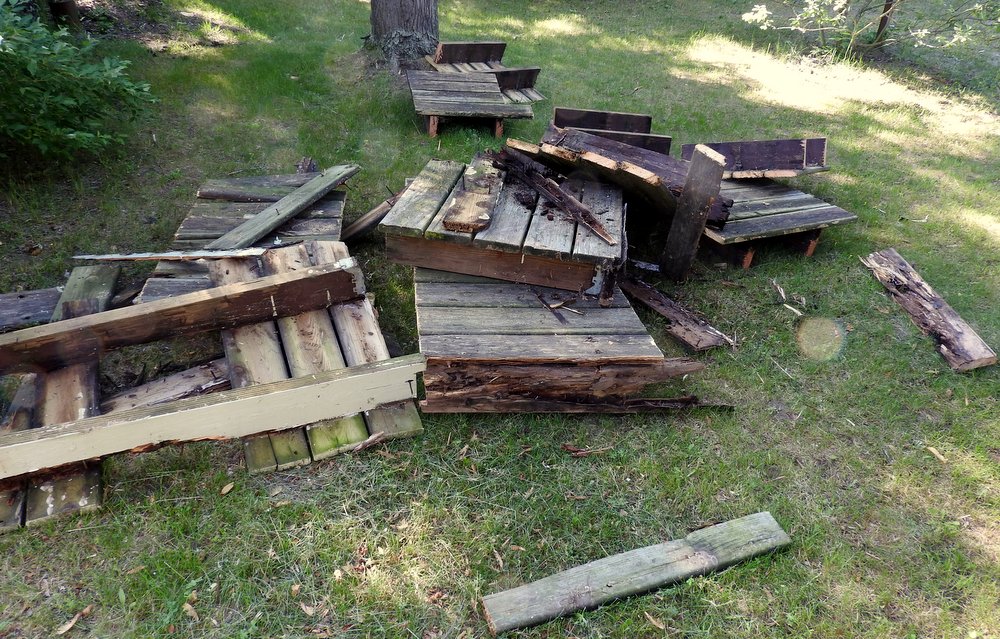 These are the pieces Mark cut out of the deck. The wood was never pre-treated and some of it is rotten.

I asked Mark to help me plant a geranium that isn’t doing very well in its pot.  I thought we could pull some vines that had a strangle hold on a little feature in the front yard and plant it there.  However, as we got started pulling those vines, we noticed they were in other places and were taking over the shrubbery as well.  There was a big shrub we’ve been calling an arbor vita except it’s low to the ground.  We didn’t like it, so Mark decided to cut it out. 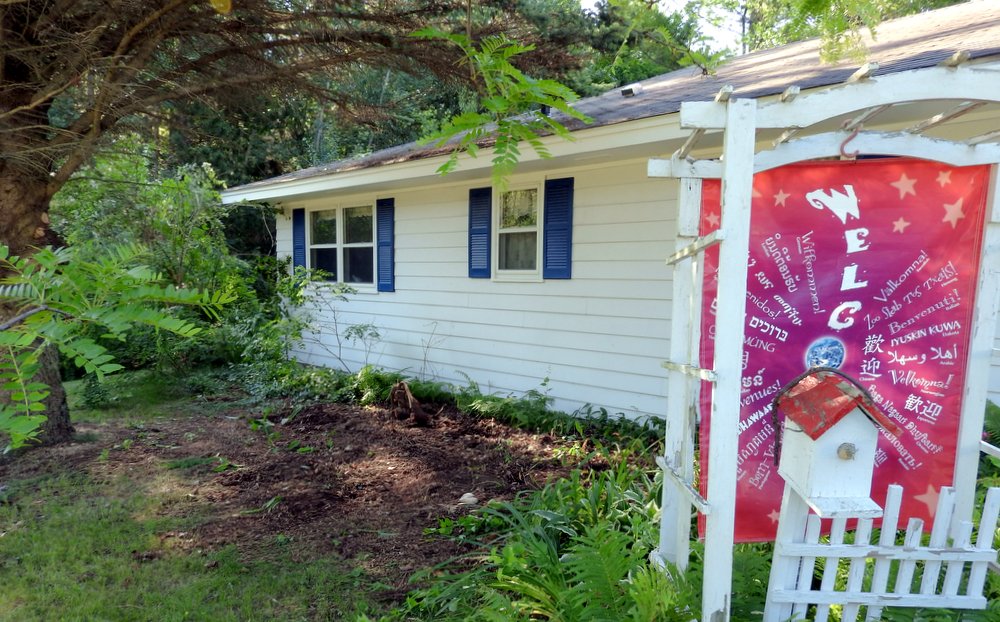 That one shrub left a huge bare space when we cut it out.  The structure on the right was the one we were originally trying to disentangle from the vines. 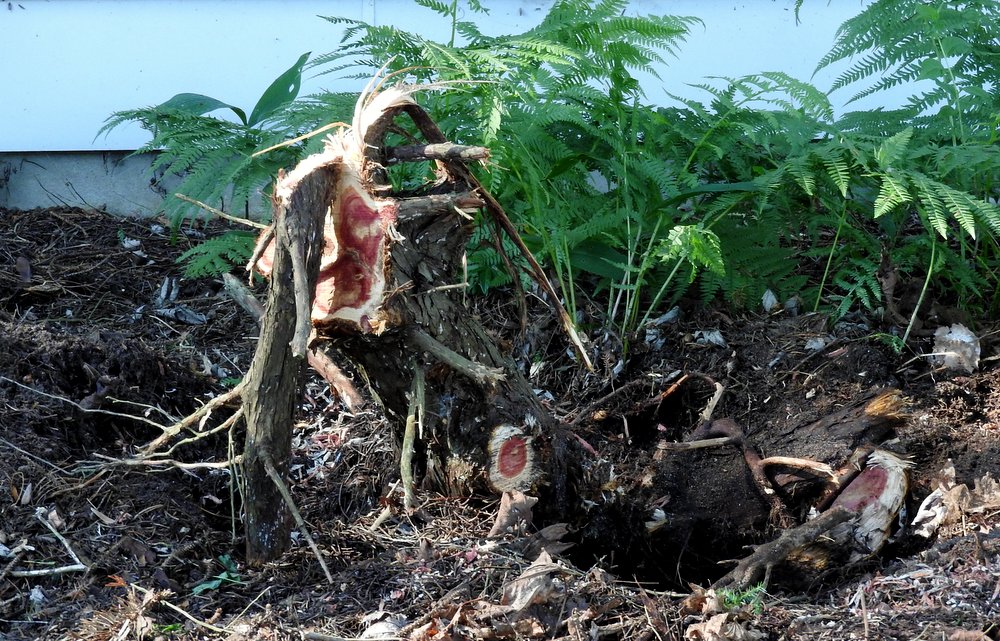 The stump was so embedded that Mark thinks we might need to pull it out with our truck.

Well, one thing led to another, and we decided to pull out the grape vines that were covering all the other plants on the side of the house. 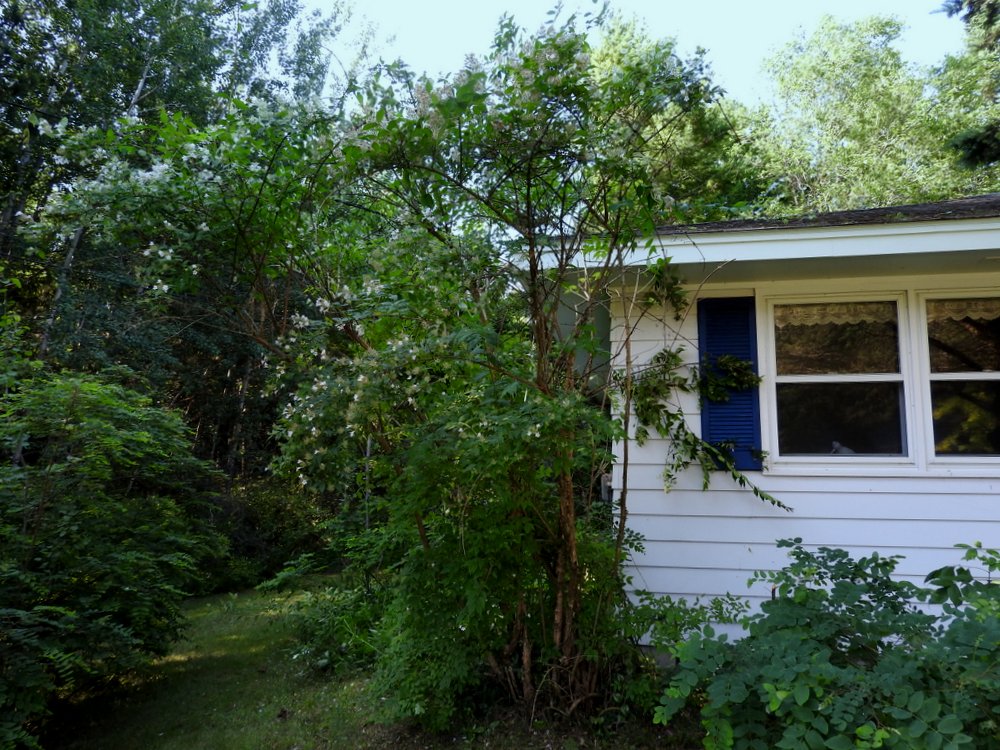 The grape vines had completely overrun this little tree on the corner of our house. They had also grown about thirty feet into our big fir tree. 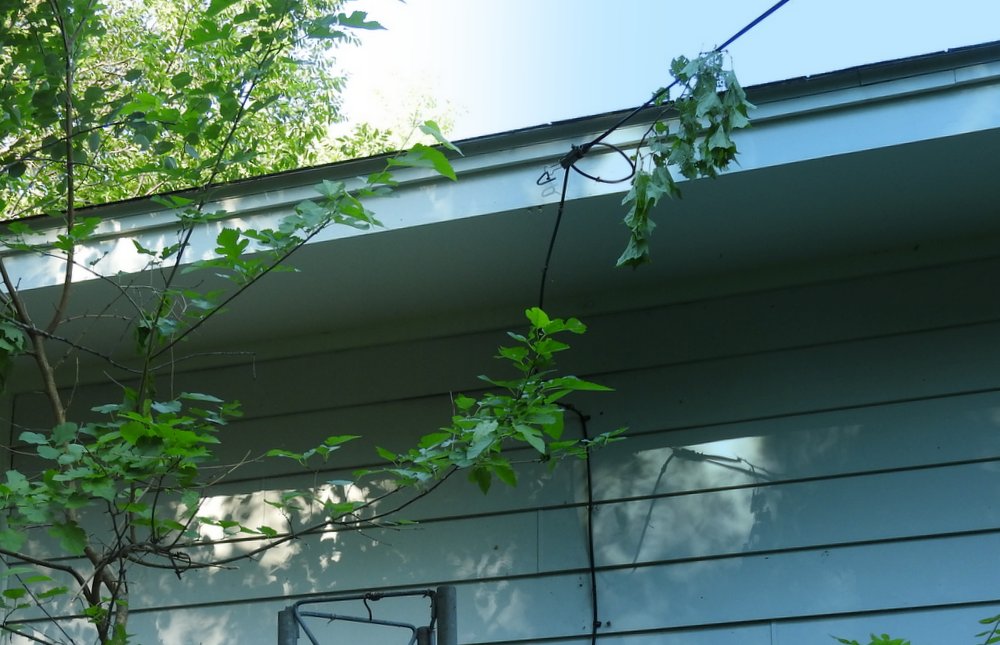 The scariest thing about the grape vines was that they had wrapped themselves around the wiring that comes into the house. You can still see a remnant hanging from this wire.

Lest you feel bad that we pulled grape vines out, the leaves on these vines were completely bug-eaten and the grapes were not developing properly.  Mark found another grape vine behind the Picker’s Hut that is doing much better and we’ve left it to see if it will produce.

As Mark was pruning and pulling out vines, I dragged the remains out and piled them in the meadow.  I was so exhausted after a number of trips that I told Mark we needed to stop the pruning and get the yard cleared and call it good for the day. 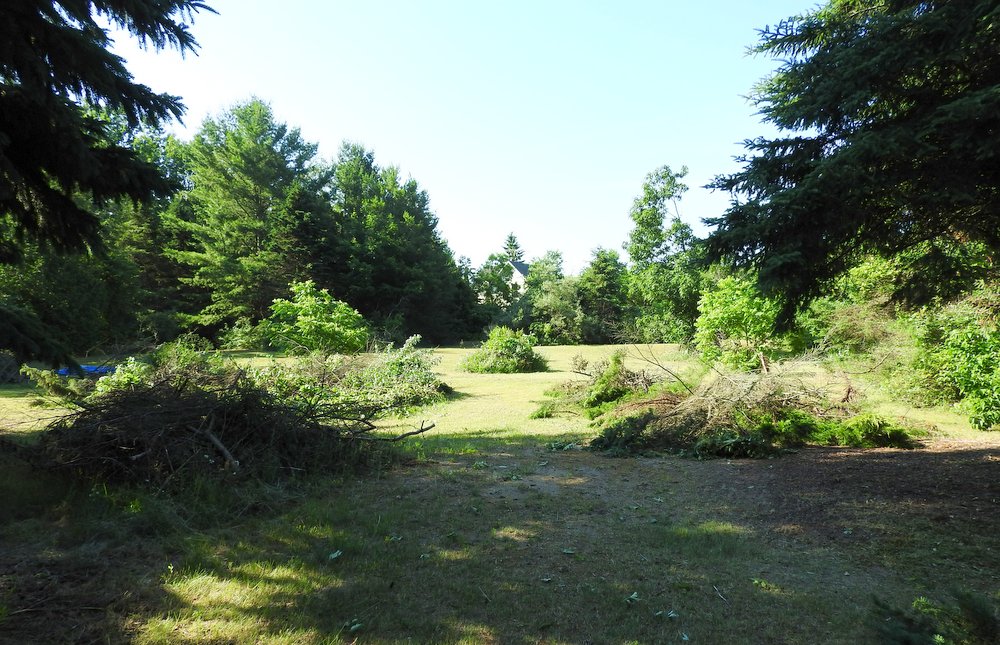 Piles of debris in the meadow.

In the end, we never did get the geranium transplanted.  The soil under the bushy arbor vita was sandy, so we need to put soil in there before we put the geranium in.

We recently had a surprise.  Mark had potted a rose bush at Wagon Trail Campground the first year we worked there.  He left it covered over the winter and it came back the next year we worked there.  Last winter, the rose didn’t seem to make it.  When we came back and moved our stuff from our old campsite to our new house, Mark brought it along but left the pot on the cart all this time.  He recently had time to unload the cart, and lo and behold, the rose was blooming!  Someone at a garden shop had told Mark that sometimes when a rose bush dies, the plant grows another shoot out of the bottom of the root and comes up. 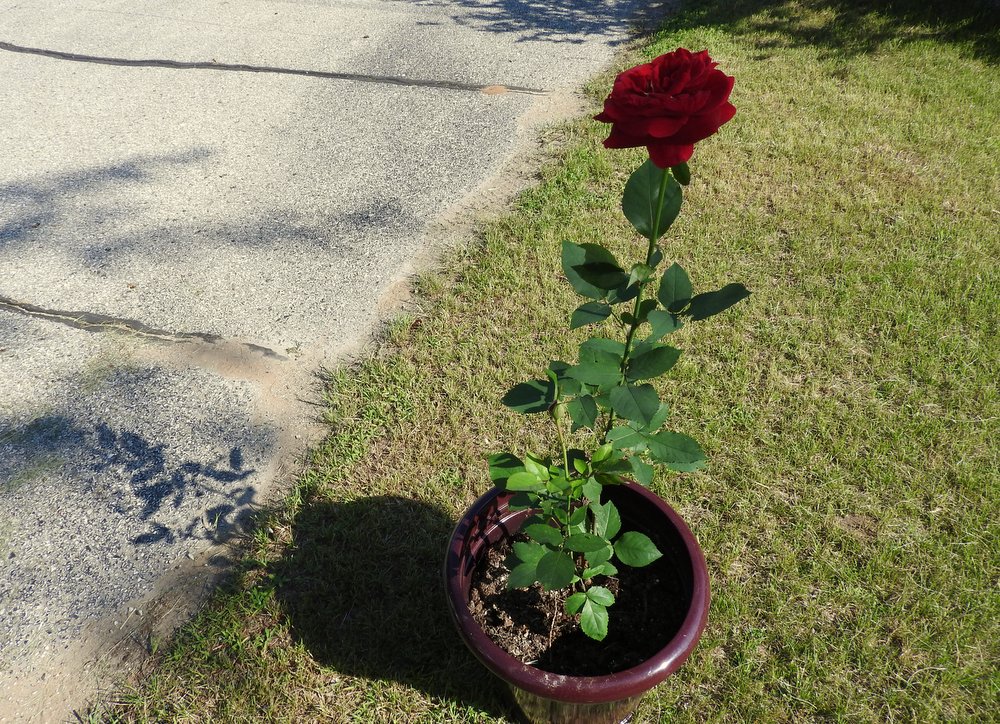 We had planned to go watch the fireworks last night, but we were too bushed to go out again.  We could hear them though.

I hope you all had a good 4th of July!