It was a relatively short trip today from Fort Dix, New Jersey to Dover Air Force Base in Delaware.  It would have been even shorter if we hadn’t run into some problems at the toll bridge between New Jersey and Delaware. 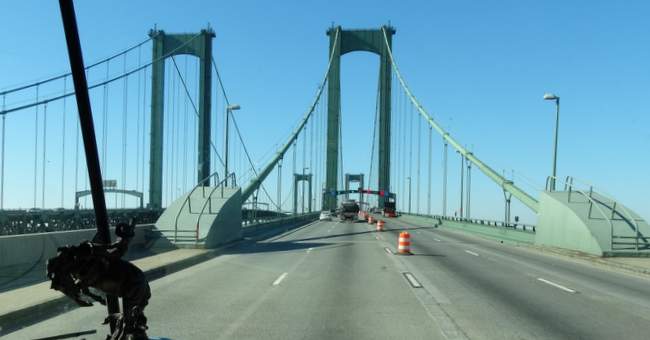 We crossed this toll bridge between states.

The toll booth was on the Delaware side of the bridge.  We had gotten $9.00 cash, uncertain how much the toll was going to be.  When we got to the booth they announced that it would be $20.00.  We told them we didn’t have that much in cash and asked if they could take a card.  The guy at the booth had to call his supervisor to ask about that and she brought out a machine that was supposed to read cards, but her machine was not working.  Mark turned off the engine because it was taking quite a while, and they finally gave up on their machine and said they’d bill us.

Mark went to turn the key and the RV engine did not turn over.  He tried again.  Still nothing.  He said, “Oh no!  I think the starter has gone out!”  I was wondering if we should call AAA.  The guy in the booth called someone who had the job of helping vehicles that couldn’t get going after stopping to pay their toll.  That person was getting ready to come out and help us move when Mark tried the key again and the engine roared to life.  He was praising God as we rolled out of there!

However, when we got past the toll bridge, Mark was complaining that if they were going to charge $20 to cross their bridge, at least the roads should be in better condition than they were. There were potholes and bumps on the Delaware side.  I don’t understand why the eastern US has so many toll roads and bridges when the western side has so much more vast expanses to cover and the roads are free.  We have been trying to avoid the toll roads as much as possible, but these toll bridges are impossible to avoid.  I remember we had a toll bridge between Oregon and Washington when I was little, but as soon as it was paid for they removed the toll booths.  I also remember it was a matter of putting a few coins in.  I realize that was a long time ago and prices have gone up, but sheesh!

So here are a few pictures I took after that little episode: 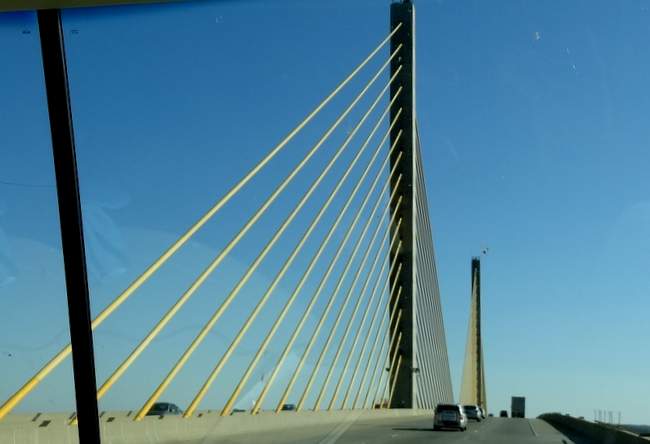 This looked like it was more for decoration than to support the bridge. It was kind of pretty. 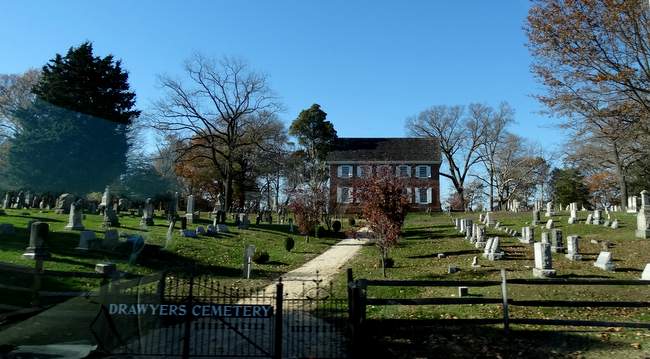 I have a fascination with how different states do cemeteries. This almost looked like a cemetery in someone’s front yard.

We finally arrived at Dover AFB.  This is the last place that wouldn’t take reservations on our trip, so I was a little nervous as to whether there would be space for us.  I needn’t have worried at this time of year.  We found a spot and got hooked up before going to fill out the paperwork and pay for it.

Mark pretending to be worn out after getting us set up. 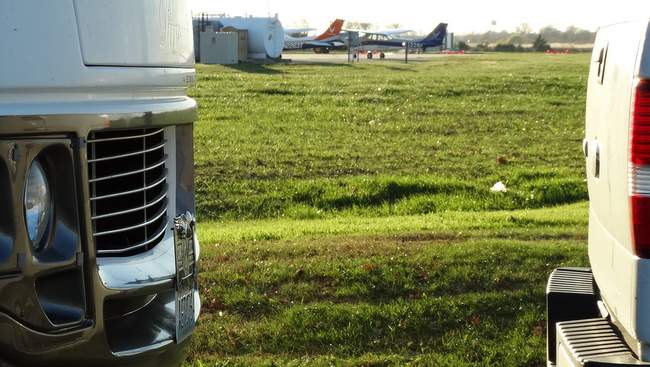 Yes, we are this close to the airstrip!

Tonight we’ve been hearing big planes taking off and landing.  I hope they don’t do that all night!