One problem with having to be somewhere at a certain time is that you don’t have time to really stop for pictures.  Mark and I had a long push today to make it for the 2nd Annual NRVIA Conference which starts tomorrow.  Actually, tomorrow is a training for me and the conference itself starts on Saturday.  At least we get to stay in one place for a few nights, which is lovely.  It means we get to take things out of the sinks and actually use them and bump out both slide outs so that the RV feels more spacious again.

So here are today’s pictures, and remember, we were pushing so you get the pictures through the windows, including the bug-filled windshield! 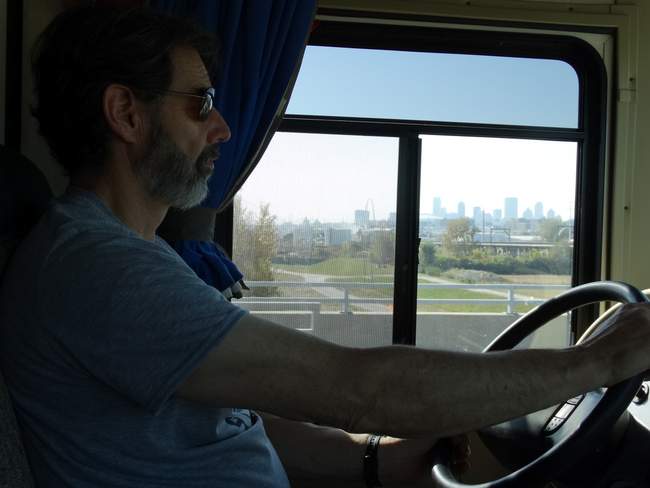 Crossing over into St Louis, MO 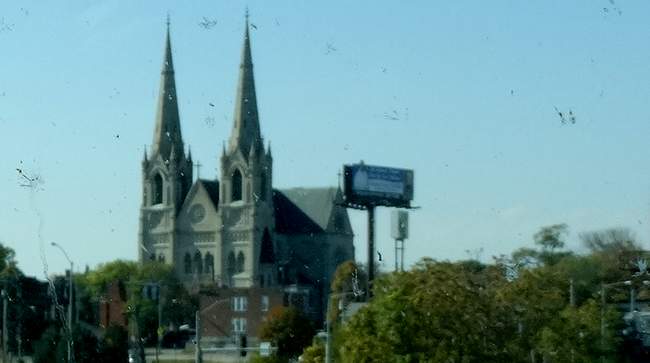 There was this huge cathedral, but there were also a number of other spires in St Louis. 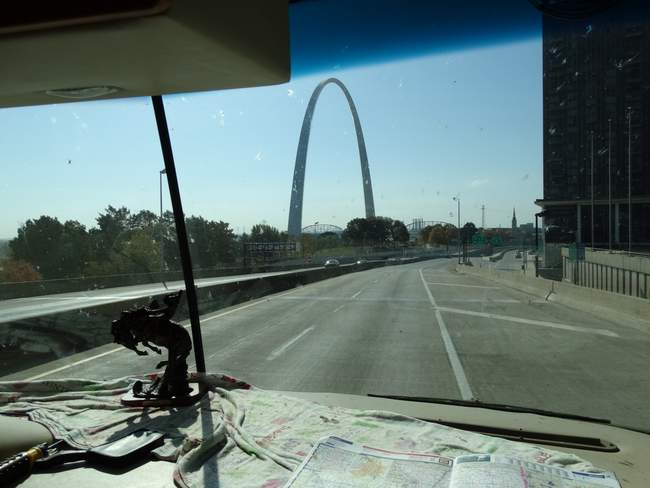 This is the closest I’ve been to the arch yet.

We finally left the flatlands of Illinois behind and started getting into the Ozarks.

About half way through the day we crossed into northern Arkansas.

There was a fair amount of field burning going on. It made things hazy for a while. 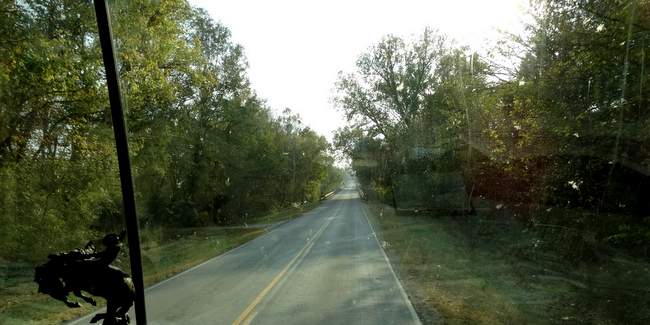 We got off the highway and were on narrow back roads most of the afternoon.

We passed lots of farms. 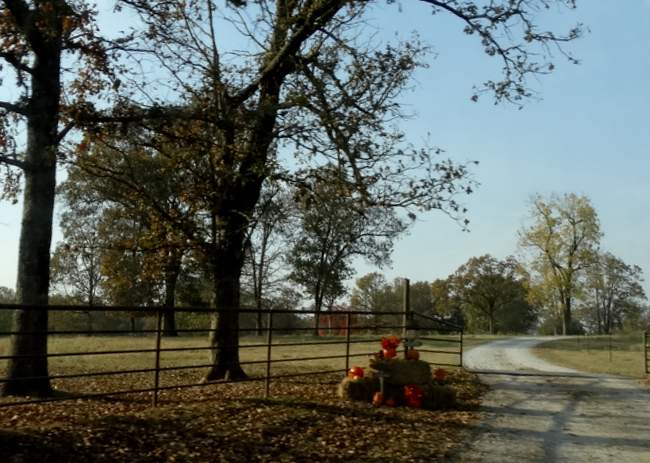 I keep having to remind myself it’s almost Halloween. One loses track on the road. 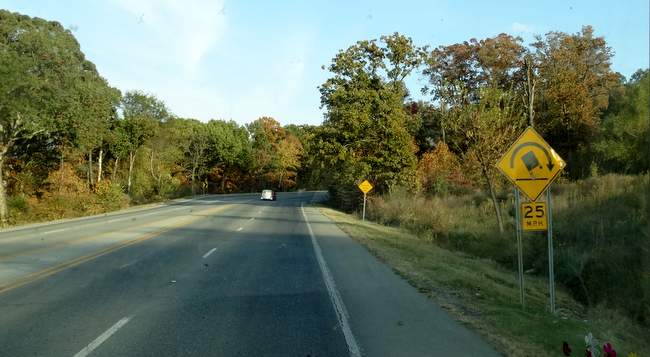 What was particularly tiring for Mark were the many curves and steep downgrades.

We got a look down into the valley on our way up a mountain. (We’d call it a hill in the Pacific NW!) 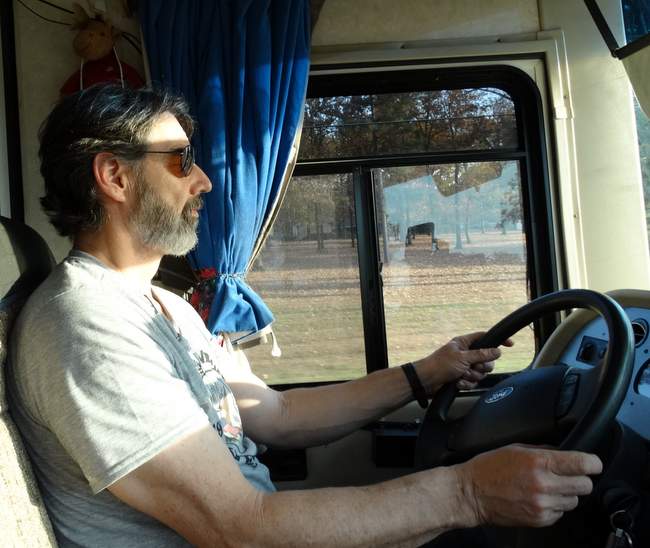 We were driving into the sunset.  See Morris the Moose above Mark’s head?  He’s traveled with us ever since our honeymoon! 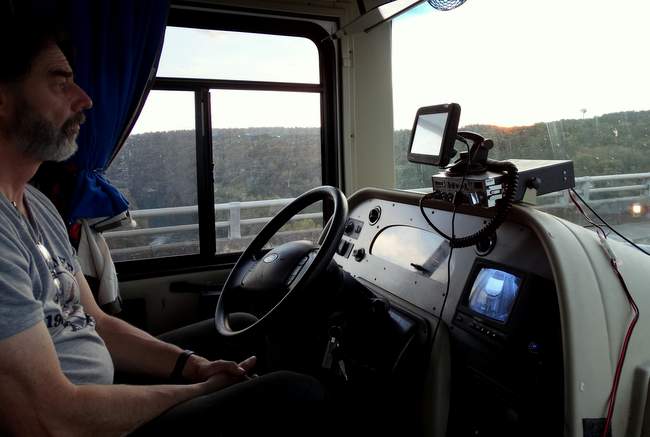 No, Mark didn’t take his hands off the wheel while driving. We were stopped for road construction. 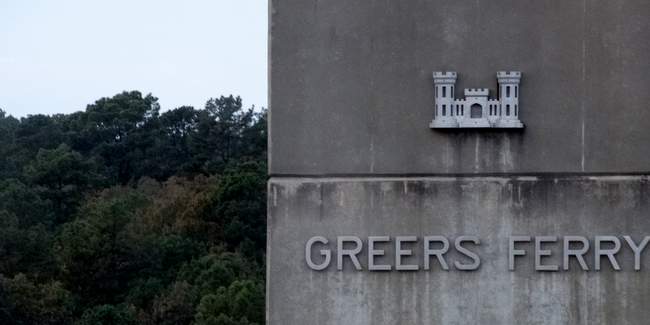 This is where we were stopped.

There was still a little bit of light when we arrived at the Army Corps of Engineers campground where we’ll be spending the weekend.  We found a site that wasn’t too sloped and got set up and spread out.  One of the RVers near us who isn’t part of the Workamper Rendezvous that was going on all week said that the others were at a barbecue for closing night.  We just stayed in our RV and had microwavable dinners.  We’re beat!  Fortunately, my training doesn’t start until the afternoon.

One last note, and this is a prayer request for those of you who are so inclined:  My stepfather, Cal Stout, was diagnosed a few weeks ago with a rare form of aggressive thyroid cancer.  It has already pinched off his vocal chords so that he can’t speak above a whisper.  Tomorrow (Friday) he will be having surgery to have the cancer removed.  Then he will require six weeks of five days a week radiation treatment.  Please pray that his surgery goes well and that the treatment will cure him.  Also, please include my mother, Donna Stout, in your prayers.  I’m not entirely certain she wanted me to mention this here, but I figure they can use all the prayers they can get!

2 thoughts on “From Heber Springs, AR”