The day that Mom and I returned from Klamath Falls, I spent the night with my older sister Sherill, but I was too exhausted by the end of the day to write.  Then yesterday I flew home and there was the long drive home and the reunion with Mark, so I didn’t get to write.  So after my first day back at work, I’ve decided to do a recap of the highlights of my trip out west. 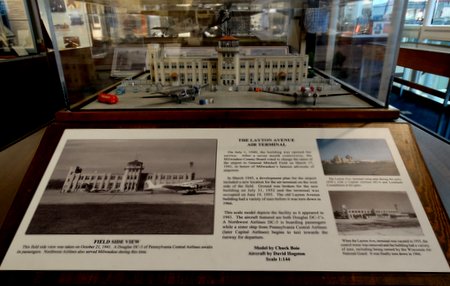 On Wednesday the 22nd, Mark drove me the three hours to Milwaukee, WI to catch a Southwest flight to Seattle, WA.  This is a replica of the original airport. 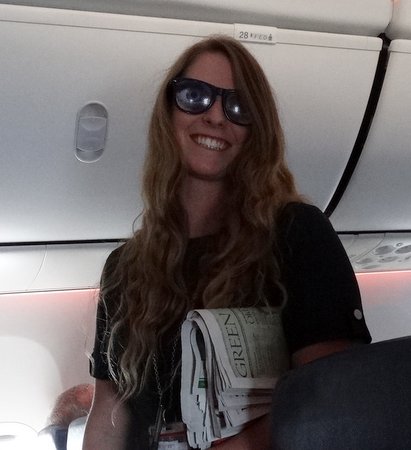 On this flight they made a concerted effort to add a touch of humor. This was my stewardess. 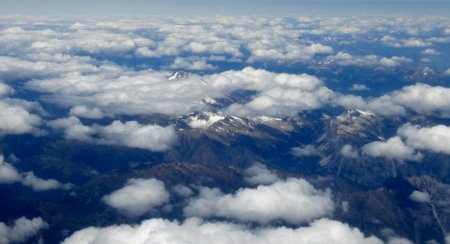 I got excited when I saw Mt Rainier poking through the clouds. I knew I was back in the NW. 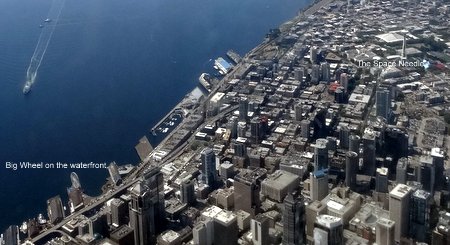 Coming into Seattle I could see the Big Wheel (Ferris Wheel) that Mark and I once rode, and in the upper right corner is the Space Needle.

From Seattle I took an Alaska Airlines plane to Bellingham, WA where my Aunt Marg picked me up.

My cousin, Dan, owns the whole house but lives on the main floor. The second floor is rented to his daughter and son-in-law, and Aunt Marg lives in a small addition to the right. This is looking at the back side of the house. 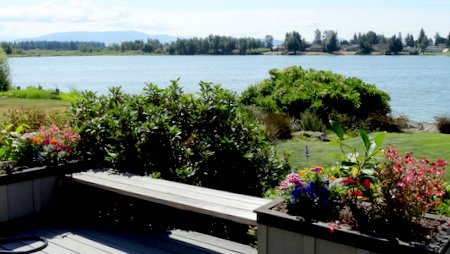 This is the view from Aunt Marg’s deck, looking toward Wiser Lake.

Thursday we had a number of errands to run and in the process we drove through downtown Lynden.  I was glad to see it is coming back to life! 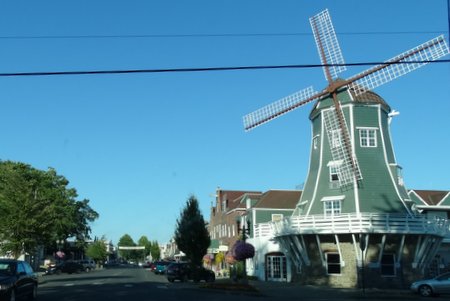 The windmill. Lynden is a small Dutch farming community.

Friday Aunt Marg put me on the Bolt Bus in Bellingham and I rode it all the way to Portland, OR.  I had an interesting seatmate named Sandy who helped make the trip go by faster.  Dad met me at the bus stop in downtown Portland and took me to his house for the afternoon.  Then he and Elaine took me to Mom’s house in King City. 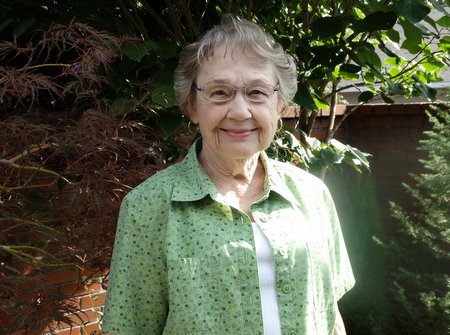 Mom in her garden.

Saturday morning Mom and Cal took me to the funeral of my second cousin, Cordy Pinner, in Salem, OR.  Cordy and I had been close when I was younger. 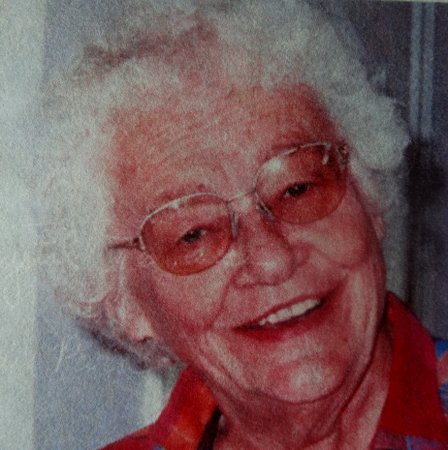 I took Mom and Cal to lunch and then Mom took me on probably the shortest shopping trip she and I have ever been on.  I needed shoes to go with the dress I brought for the reunion.  After we found some, I barely had time to get ready before my friend, Wendy Sharich, came to pick me up for the reunion. 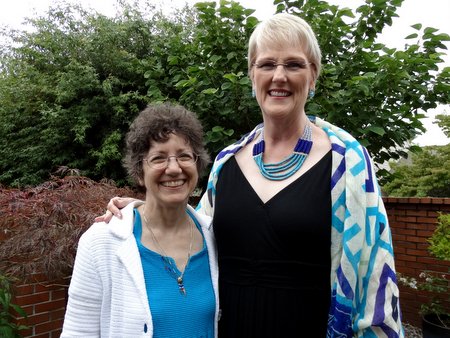 Wendy and me in Mom’s garden. 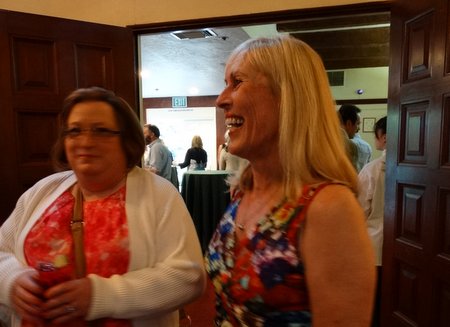 Cindy Jernigan, the wife of my former boss from Alaska, tried to talk me into coming back to work there next summer. 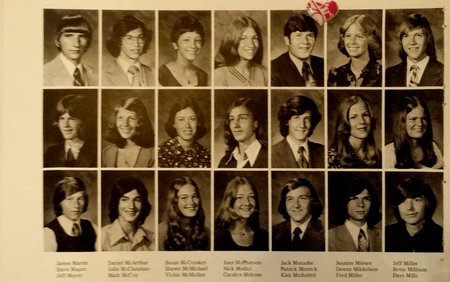 A page from my high school year book. I’m in the third picture from the top left. If you look down below you’ll see that my name was Susan McCroskey. I had it legally changed after my divorce, but everyone who knew me at the reunion called me Susie. 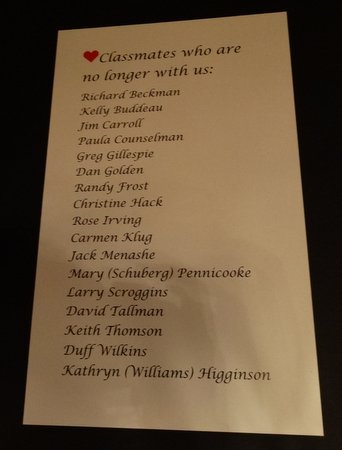 The list of former classmates who have died. I was a year older than most of them. It’s hard to believe people younger than me have died already.

Sunday there was an open house at my alma mater.  Jamey and Sarah met Wendy and me there.  It was an opportunity to share stories with my son about growing up in the early 70’s. 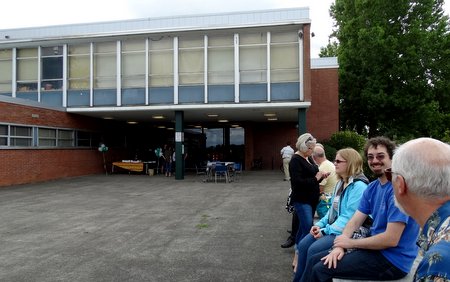 Outside Wilson High School waiting for the doors to open. 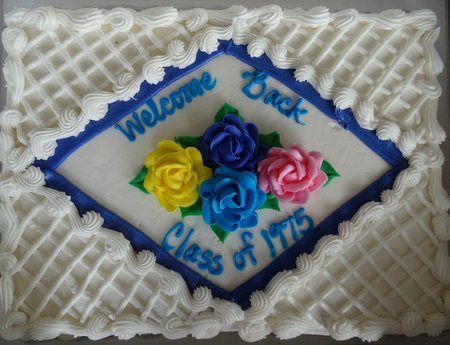 There was cake after the tour. 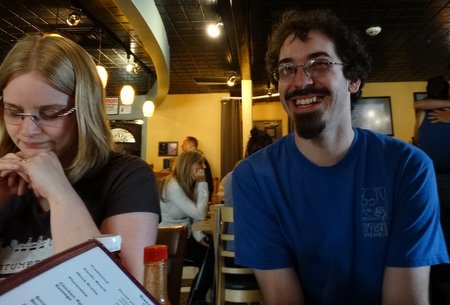 Then Jamey, Sarah and I went out to lunch.

Monday Mom and I rented a car and drove down to Klamath Falls, OR (southern Oregon) to visit with my younger sister, Lauryn, her husband, Rob, and my nephew, Nate.  Nate graduated from high school this last year and will be going to University of Oregon in the fall.  He was able to take enough college-level classes in high school to be a third of the way through college already. 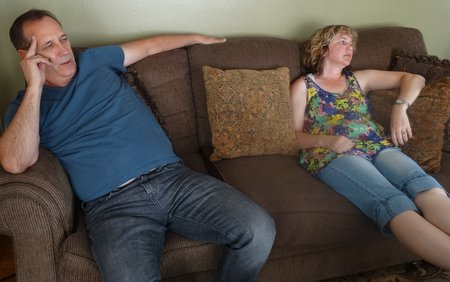 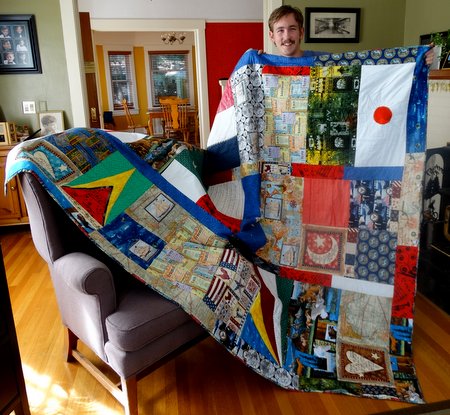 I had made a dorm quilt for Nate and delivered it in person. It has many things that interest him on it including world flags.

The highlight of the whole trip was taking Nate to a coffee stand and spending some time visiting with him alone.  I gave him all kinds of “auntie advice”!

Tuesday morning Mom and I headed back to Portland.  We took a little time on the way back to take some pictures of the scenery. 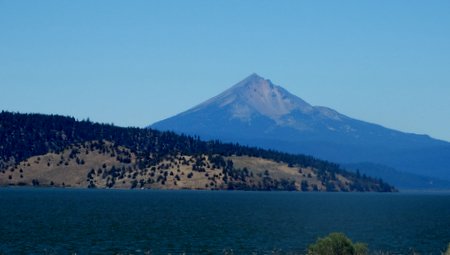 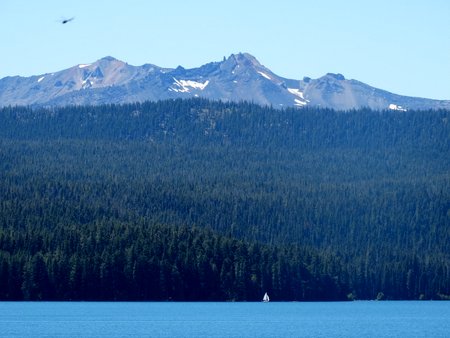 Mountains in the Willamette Pass

The road before us

A covered bridge, and behind that you can see a dam.

I dropped Mom off at home and then drove over to Milwaukie, OR to return the rental car.  My older sister, Sherill, picked me up there and took me to her home for the night.  She had just returned from a trip to Hawaii with a friend, but she’d gotten bitten by several mosquitoes there and it got into her blood system, causing hives.  She was still itching while we visited that night.

Wednesday morning we got up early and Sherill took me to the airport in Portland where I caught an Alaska Airlines flight to Seattle.

This was the first time I had no seatmate.

In Seattle I caught Southwest to Milwaukee, WI.  I was sitting next to a father with a six year old boy.  They had brought food and things for him to do, but he kept asking, “Are we almost there yet?”  He was smart though.  His dad would tell him that we’d be landing in four minutes and that would be 240 seconds, and the boy would start counting.  He did quite well for someone who just graduated from kindergarten! 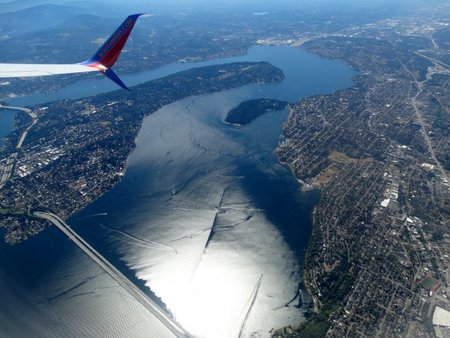 The sun reflecting on water below us. 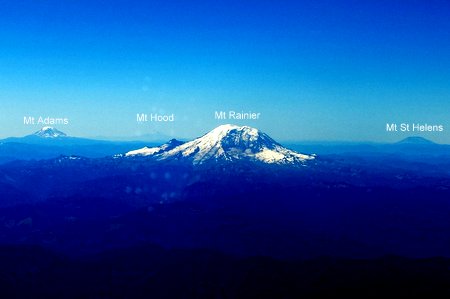 Four mountains in one shot: Mt Adams, Mt Hood (way back and barely visible), Mt Rainier, and Mt Saint Helens, an active volcano that erupted in 1980. 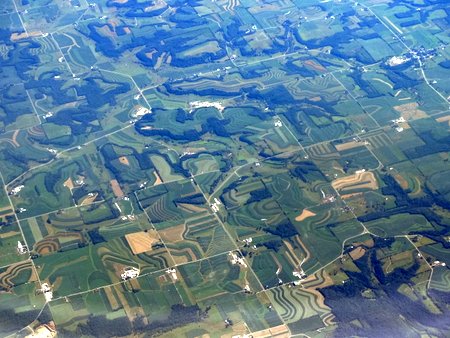 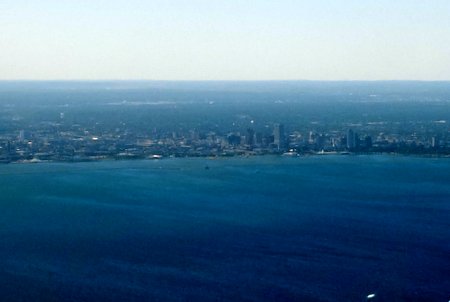 Flying into Milwaukee from over Lake Michigan. We flew out over the water and circled around. 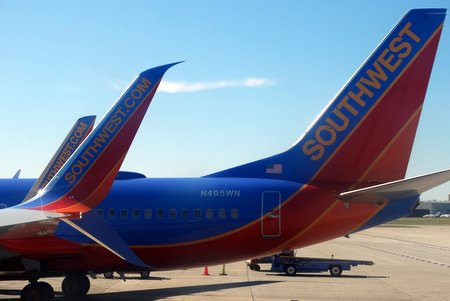 On the ground next to another plane. I like Southwest’s colors.

When I walked into the concourse, the last passenger off the plane, I didn’t see Mark at first because he was hiding behind a pillar.  He had planned to jump out behind me and grab me, but I found him first! 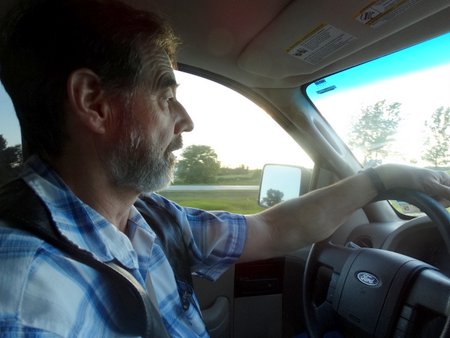 The love of my life bringing me home!