For the last couple of summers, my washing machine has been occasionally staining our clothes with streaks that look a little like oil.  This summer, it badly stained one of my costumes for work at the Noble House and my boss had to take it home and work on it to get the stain out.  She told me about a repair guy that she trusts, and when I told him what happened, he suggested I try powdered laundry detergent rather than liquid.  That seemed to work at first, but then…

…it stained some more of my clothes.  That’s when I decided I needed a new washing machine.

I put a request on the Sharing and Caring board at church and I also looked in the classifieds in our local paper every week.  I even tried looking on Craigslist even though it covered the Green Bay area, not up here.  One Sunday, two different people at church told me they’d seen a stackable washer and dryer for sale, one in Sturgeon Bay and the other in Green Bay.  The next day, I sent Mark to the Habitat for Humanity Re-Store in Sturgeon Bay to see if they still had the washer and dryer, and they did. 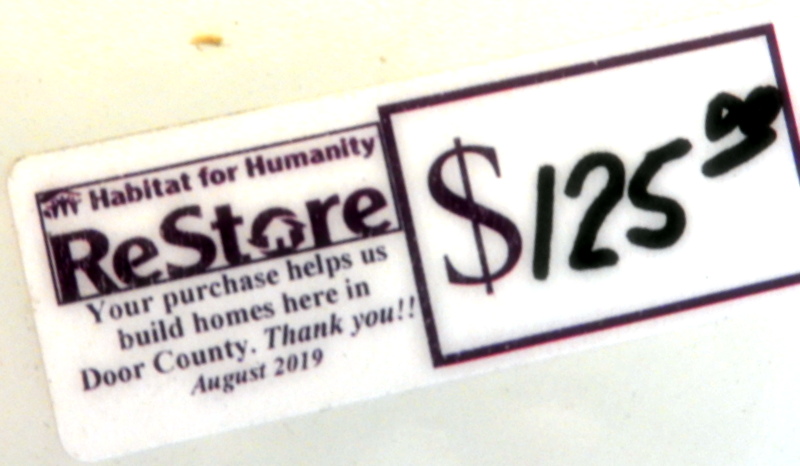 Mark bought it and honked as he drove past the Visitor Center where I was working. I was excited to see it on a trailer behind his truck! 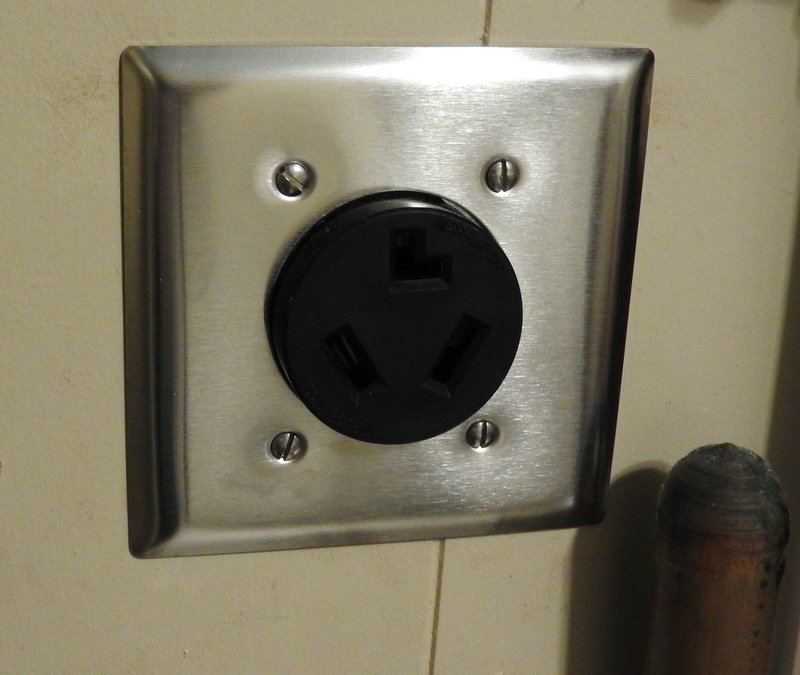 We were going to put it in that night, but then Mark discovered that it required a 240-amp receptacle and we only had 120-amps, so we had to wait for an electrician to put in the new outlet. 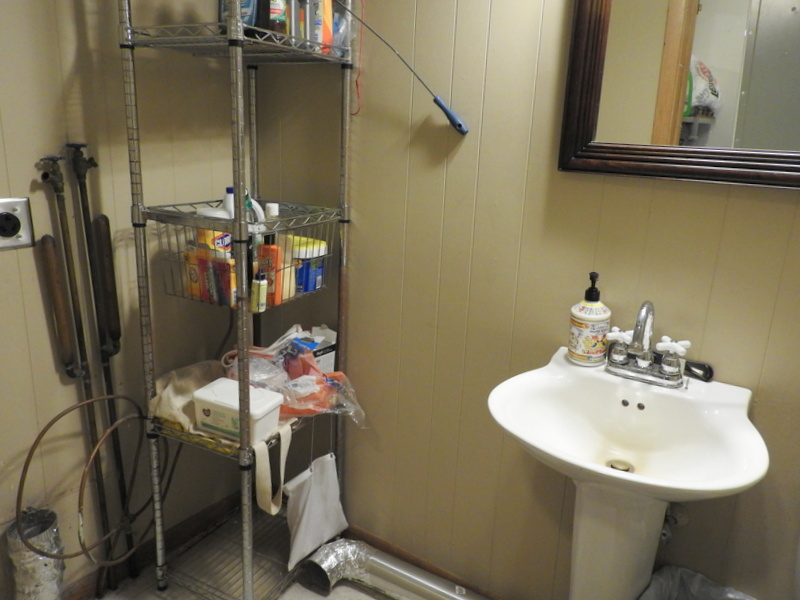 Tonight was the night to make the exchange. We got the old washer out with only a little effort. 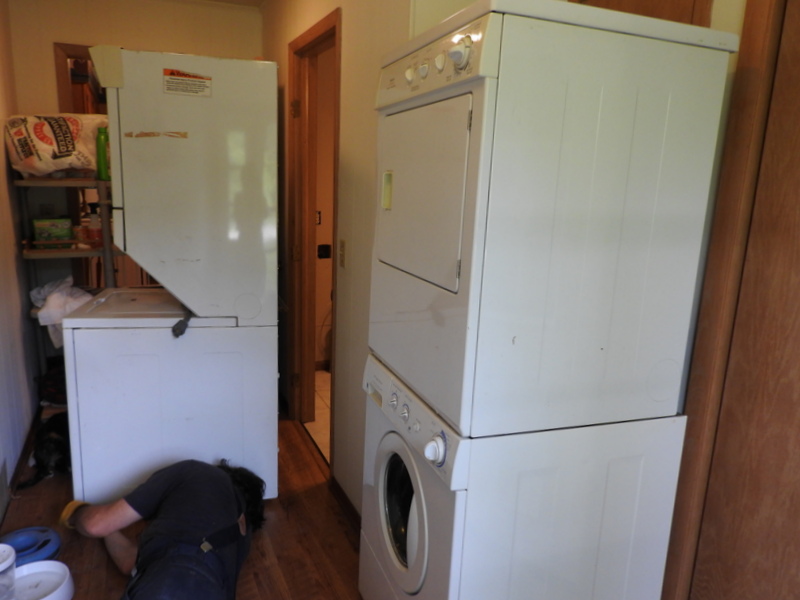 The old washer/dryer is in the foreground and the new-ish one is in the background. 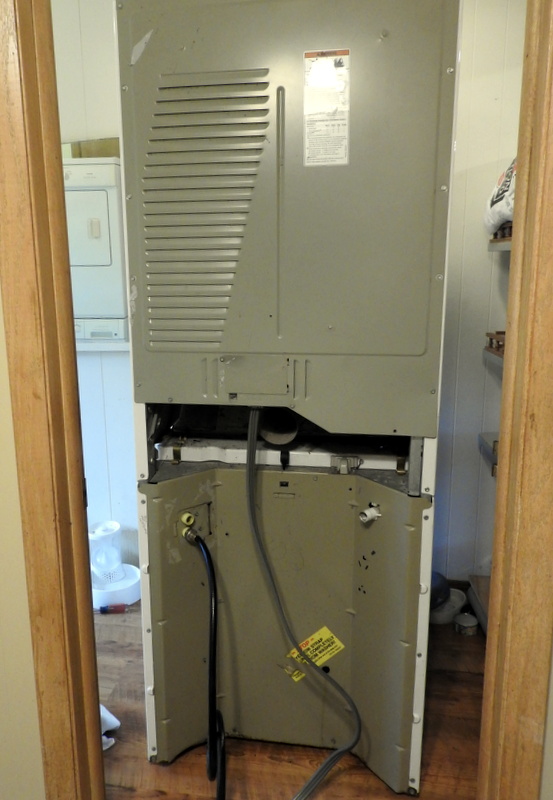 Mark got into our laundry room which also shares a tiny space with our half bath. 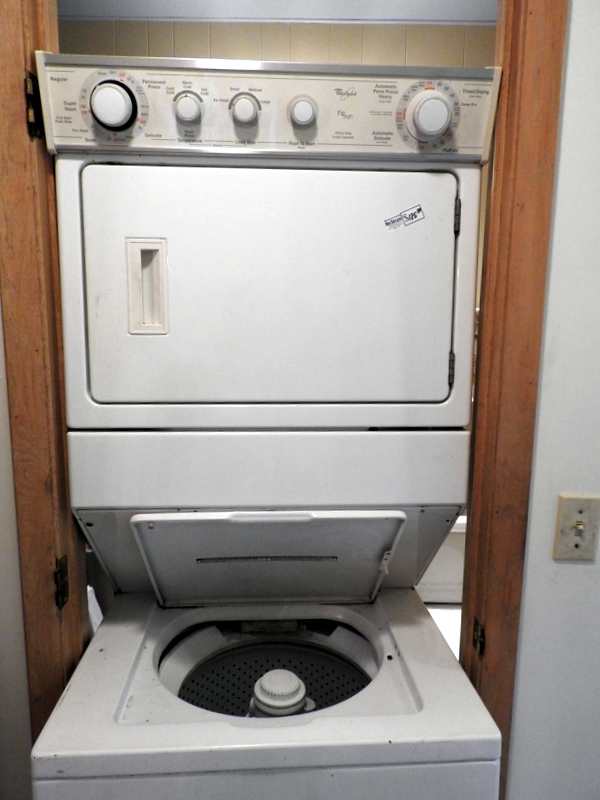 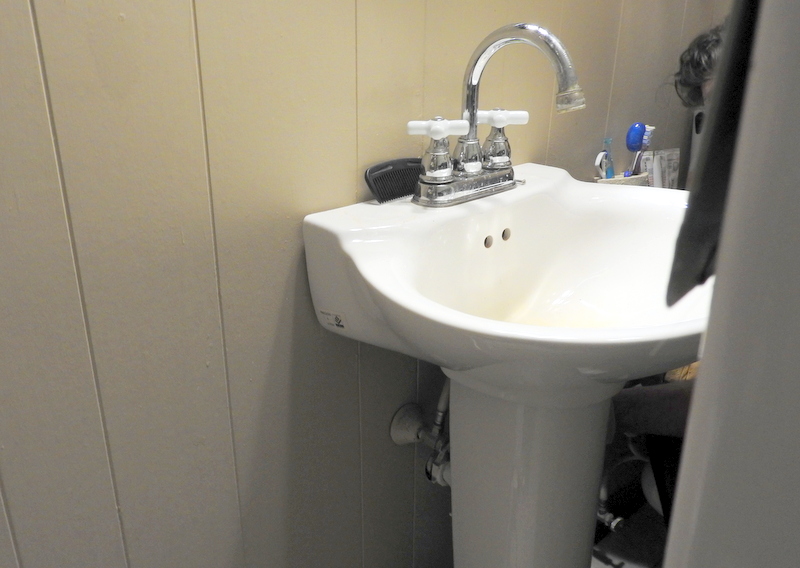 The “new” washer/dryer is bigger than the old one. It wouldn’t fit past the sink to turn around. 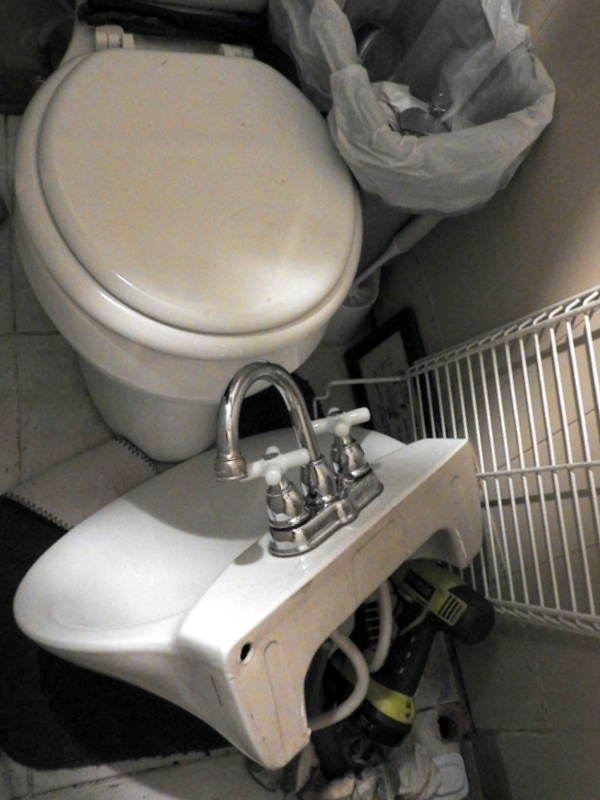 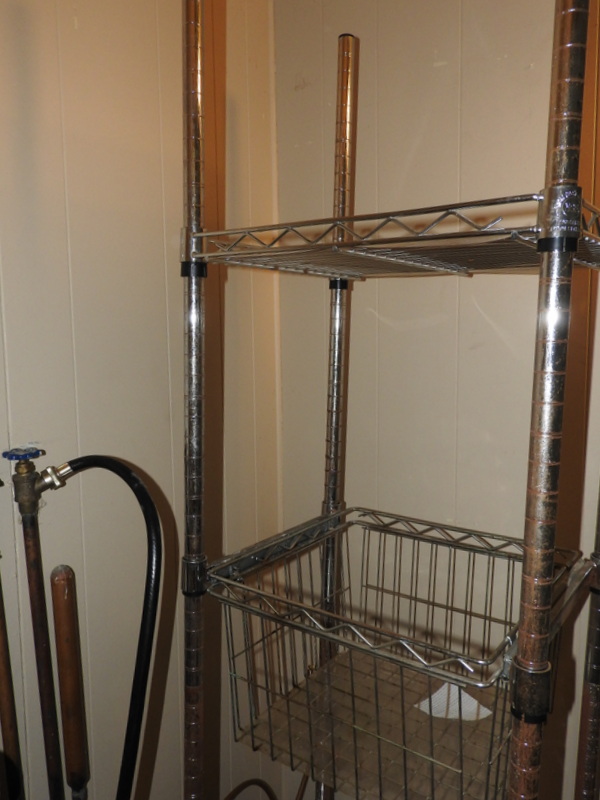 Mark was then able to get the washer/dryer turned around, but the shelving unit was in the way of getting it hooked up and in place. 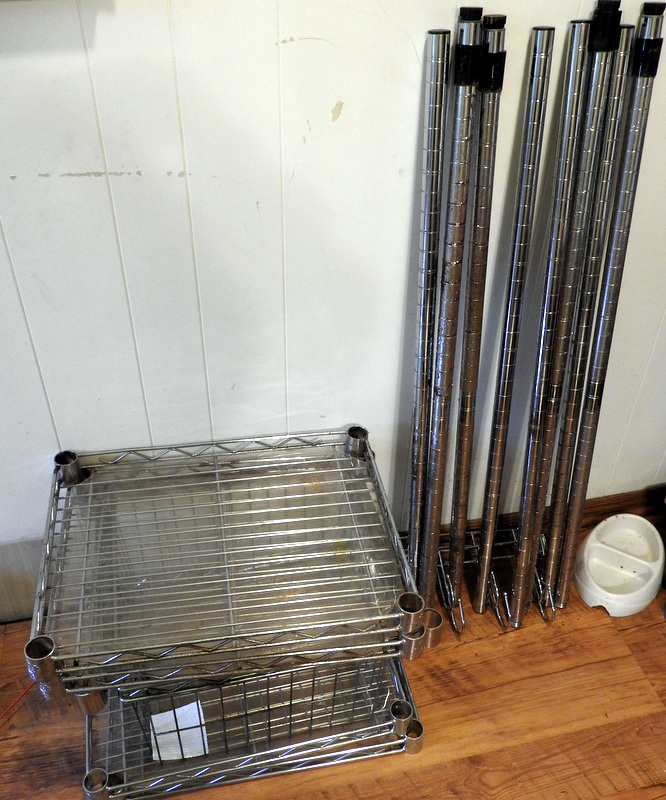 So Mark took the shelving unit apart and handed it out to me piece-by-piece. 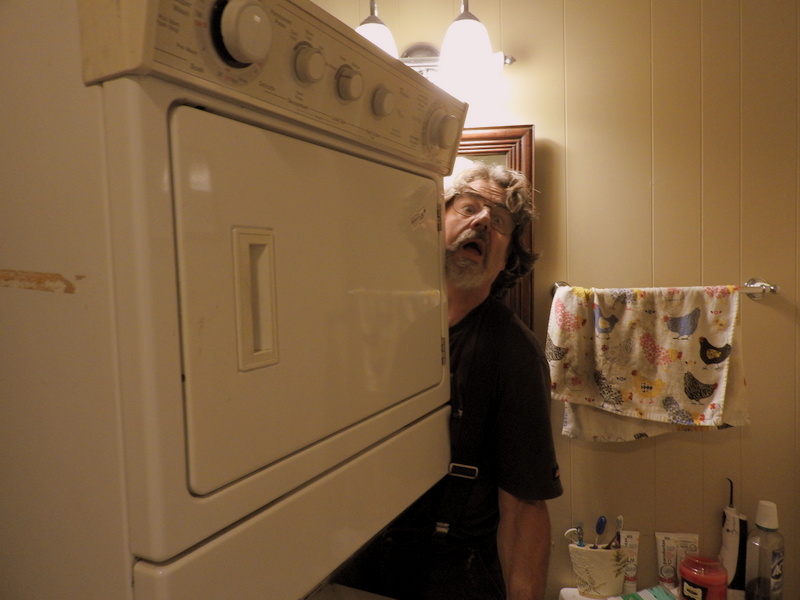 Mark hamming it up when he saw I was taking pictures! 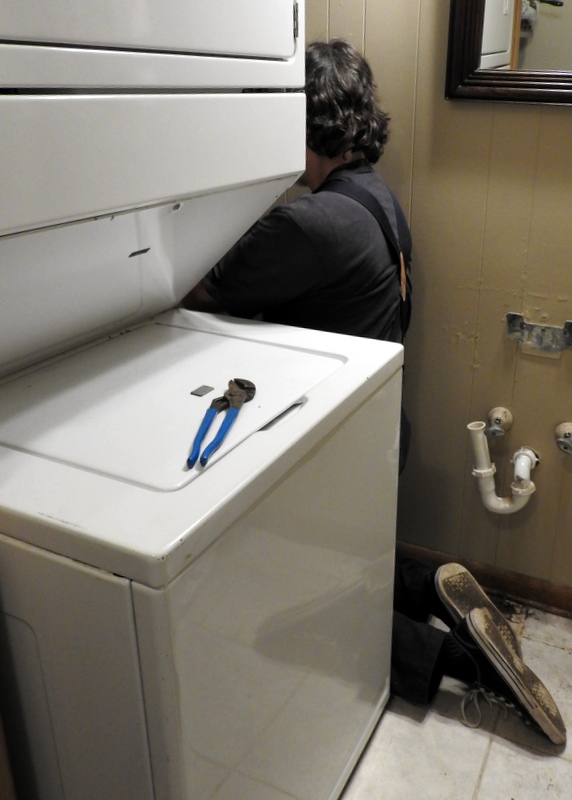 Working in a tight place 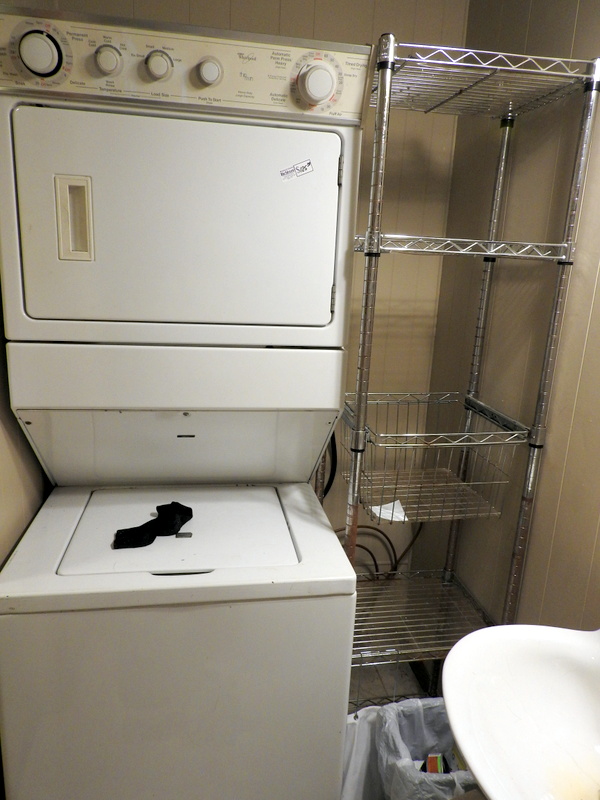 Finally, everything was back in place.

Time to try out the “new” machines.  Mark threw a load of his work clothes into the washer and during the cycle, he discovered a leak.  He put his clothes in the dryer while I put another load in the washer.  Still leaking.  When my clothes were washed, he took his clothes out of the dryer and I put mine in.  Maybe I’m not understanding how this dryer is supposed to work.  When it stopped, I opened the door, but my clothes were still fairly wet.  I tried to reset the dryer and I pushed the start button and nothing happened.  I was a little frustrated.  My old dryer had worked fine, but it didn’t come seperate from the washer.  I decided I was going to have to wait until morning and line-dry my clothes.  I left them there and sat down to process my pictures and write this blog, and at some point, the dryer started again.  It stopped a few minutes ago and I checked.  Some of the items I put in there were dry, but there was one towel that was still wet.  I am going to have to try to figure out how this thing works.