Over Labor Day weekend, Sister Bay is having their annual Marina Festival.  This year, through Mark’s efforts, BACA has a booth at the festival.  BACA is a biker group Mark belongs to and the initials stand for Bikers Against Child Abuse.

Mark got up this morning and left really early to go set up the booth.  The leader of his chapter, Ironman, and another guy who goes by the name of Lucky had come up from Green Bay this morning to help him set up, and they were waiting for him when he got there.  I finished getting ready for work and left fifteen minutes early so that I could stop by Seaquist Orchards Farm Market and get them some Pumpkin Softies which are really soft cookies. 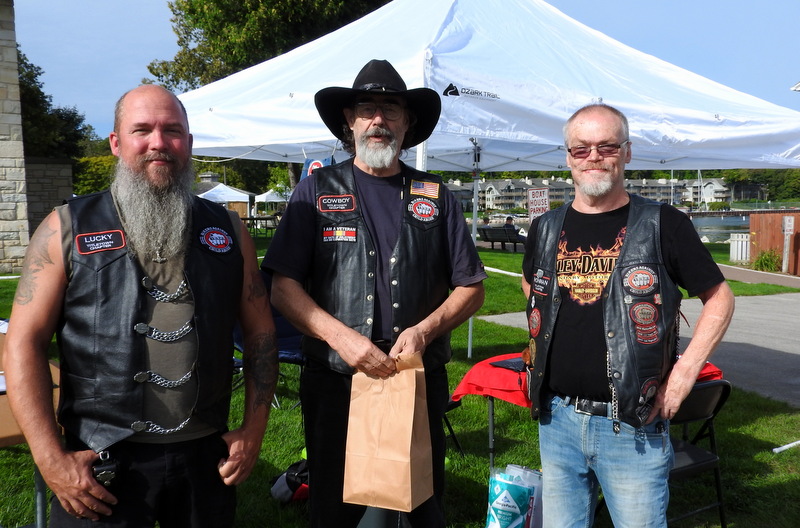 Mark’s holding the bag of cookies with Lucky (an ordained minister) to his left and Ironman to his right. By the way, in the group, Mark goes by the name Cowboy! 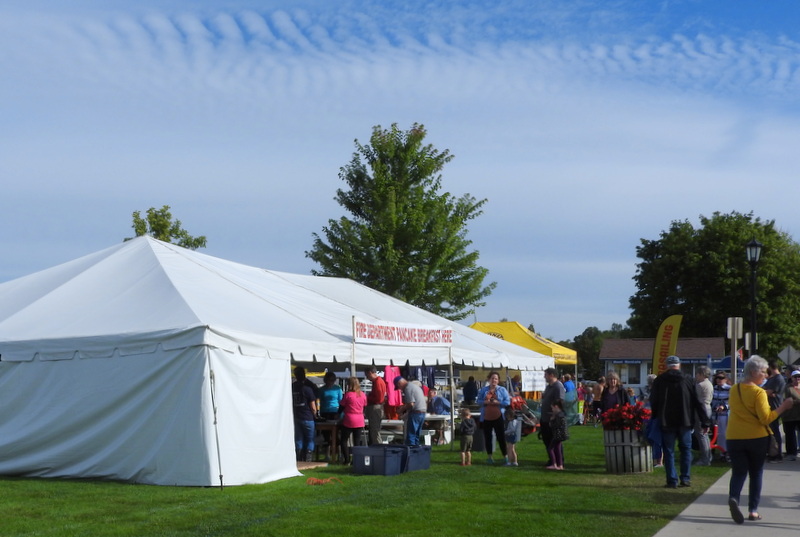 The Sister Bay Fire Department was serving a pancake breakfast this morning. 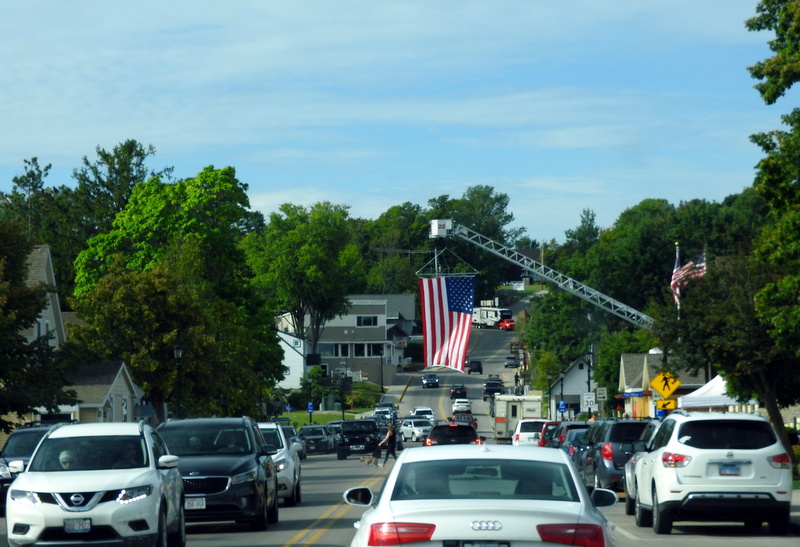 As I pulled back out into the traffic to head to work, I noticed this flag that the fire department hung above the street.

I had a very busy day at the Noble House and I was tired.  I normally take back roads to avoid going through the towns as much as possible, especially during a festival, but today I wanted to go by and see if BACA was still there.  It wasn’t easy to find parking, but I found a spot and went looking for them. 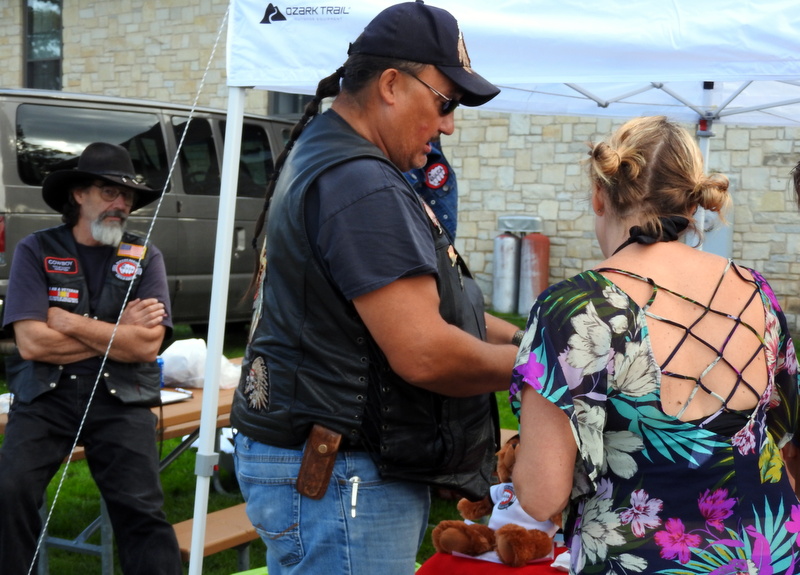 Mark was sitting back when I rounded the corner and he gave me the eye!

What BACA was doing all day was taking photos and fingerprints of children so that if they disappeared, the police would have something to go on.  Here, a Native American, who isn’t part of BACA but likes to ride with them, was giving a mother the ID they made of her child.  It includes the child’s photo, their fingerprints, and a detailed description of their height, weight, eye color, and hair color. 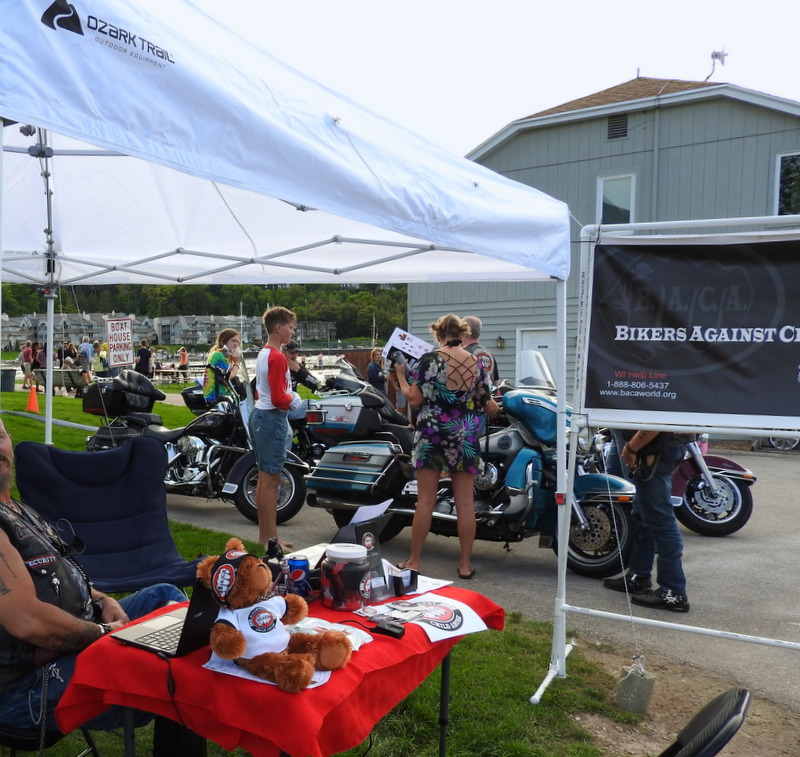 Their bikes were parked next to their booth so that if children wanted to get up on the motorcycles, they could help them. 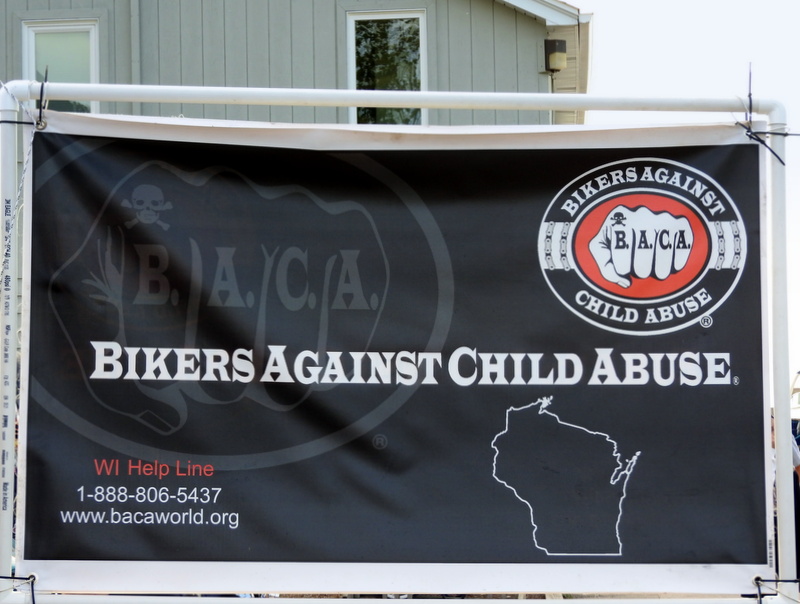 This event gave them a lot of exposure. Mark says that the police, the fire department, and a couple of other agencies came by and asked them if they would consider doing something with these organizations. 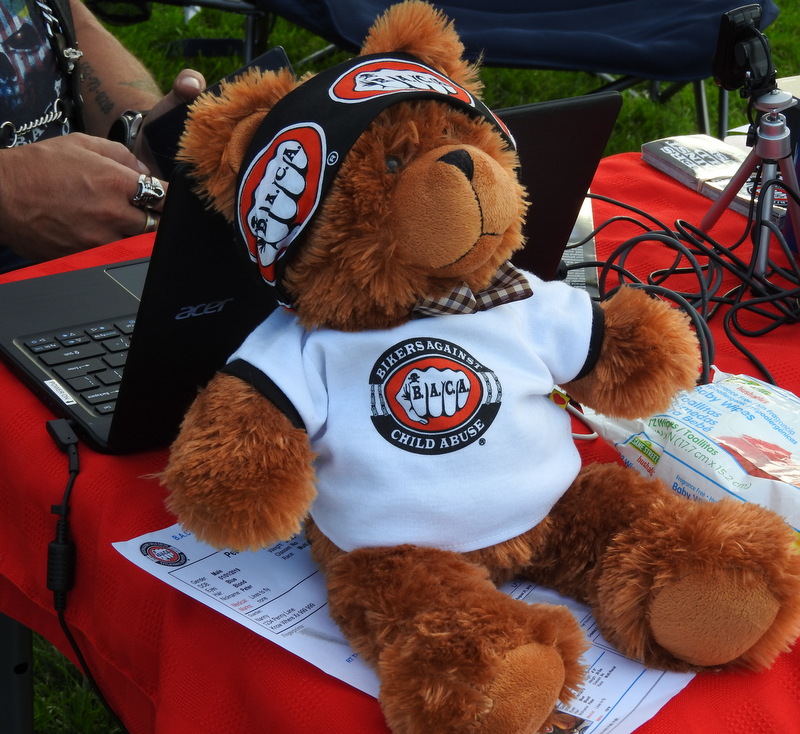 BACA Bear: These are given to children who have been abused when they are made members of the BACA family. 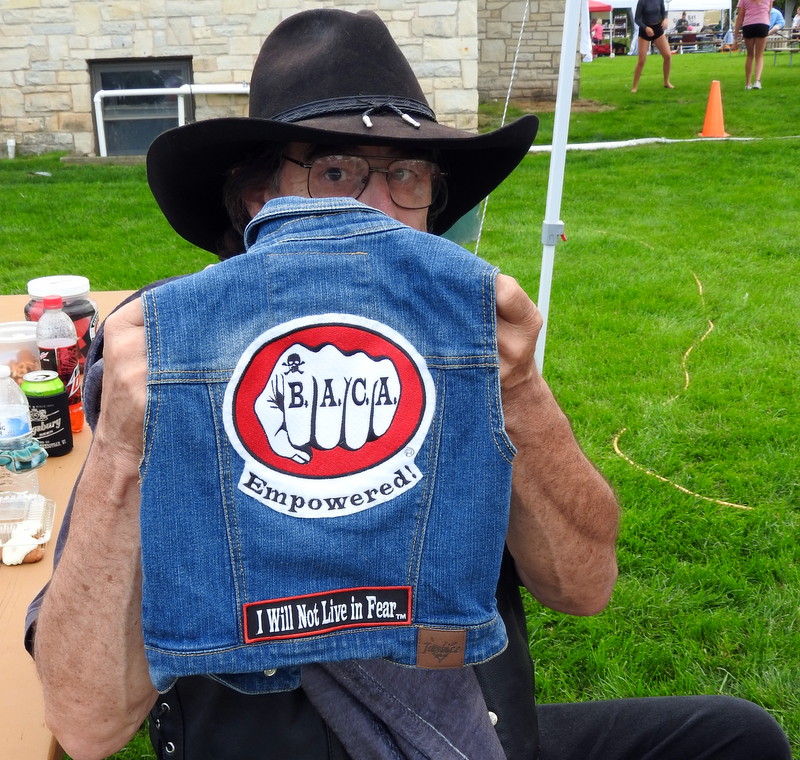 This is a BACA hero vest that will be given to a child when they are adopted into the BACA family.

So the way this works is that the BACA chapter hears about a child who has been abused and is afraid.  After consideration, and when the child is accepted into the family, a meeting is arranged for the child to meet the chapter members.  The whole BACA group rides up to their house on motorcycles and they form a half-circle in front of the child and introduce themselves by their BACA names.  The BACA bear is passed around to each member who hugs it to put all their love into it and then they give it to the child.  They give the child his/her very own BACA vest and s/he selects a BACA name.  They tell the child that s/he is now a member of the family and will be for life.  The child is given the opportunity to go for a motorcycle ride with the group to Dairy Queen or a park or something. 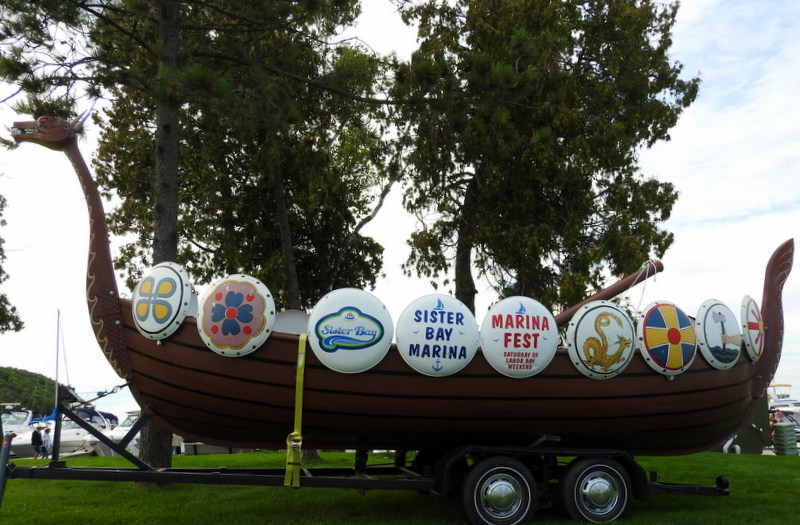 While BACA was closing up their booth, I went around and took some pictures of the festival. 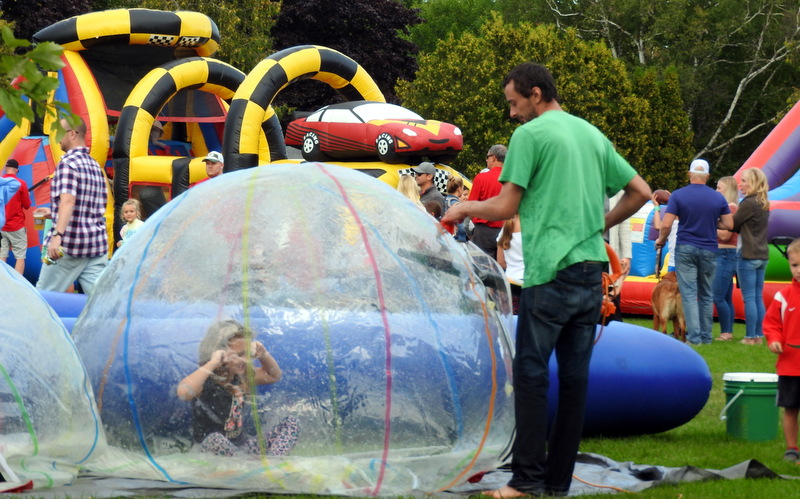 This ride involved a child getting into a big waterproof bubble, and once the bubble is blown up… 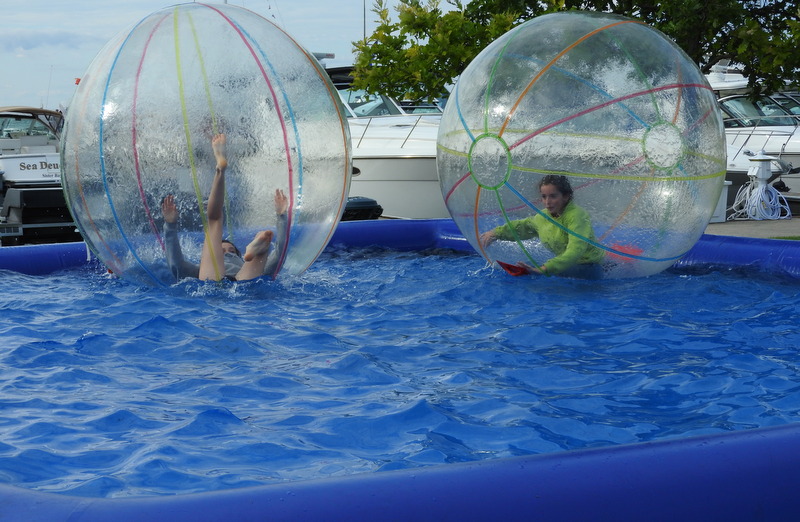 …they roll into a pool of water and try to move around however they can. 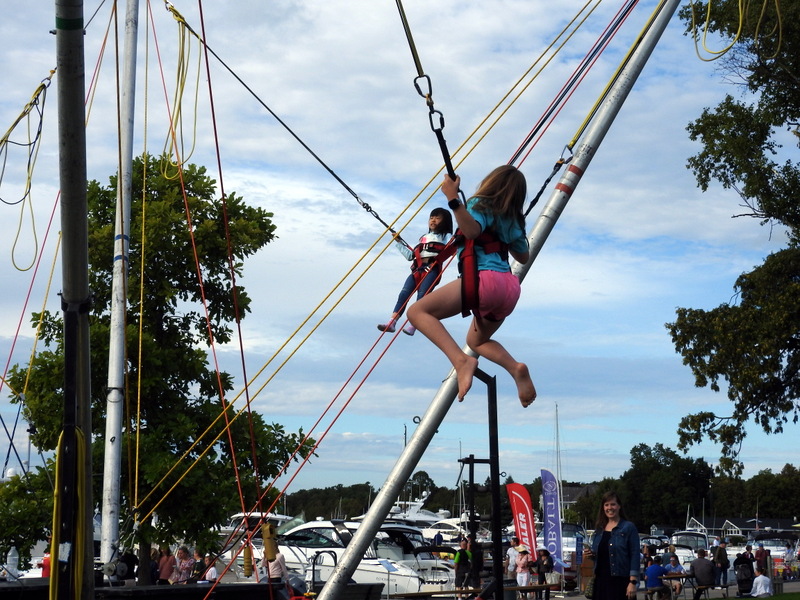 These were bungee cords and the children were able to do somersaults or just jump as high as they wanted. 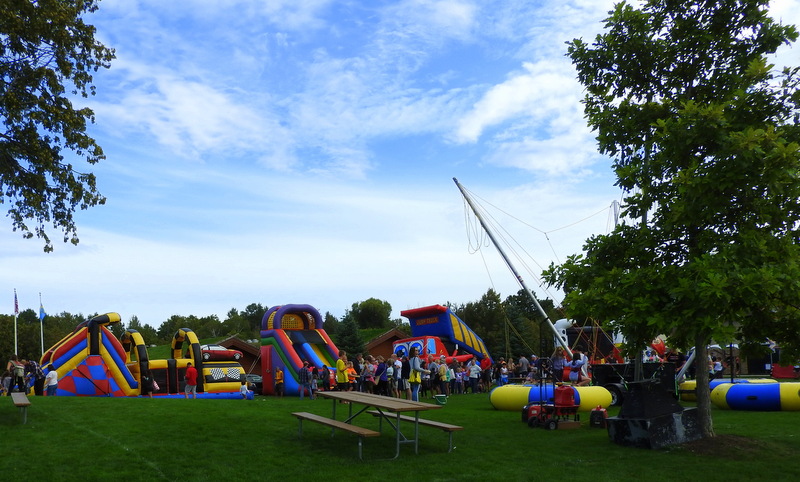 There were all sorts of things for kids to do. 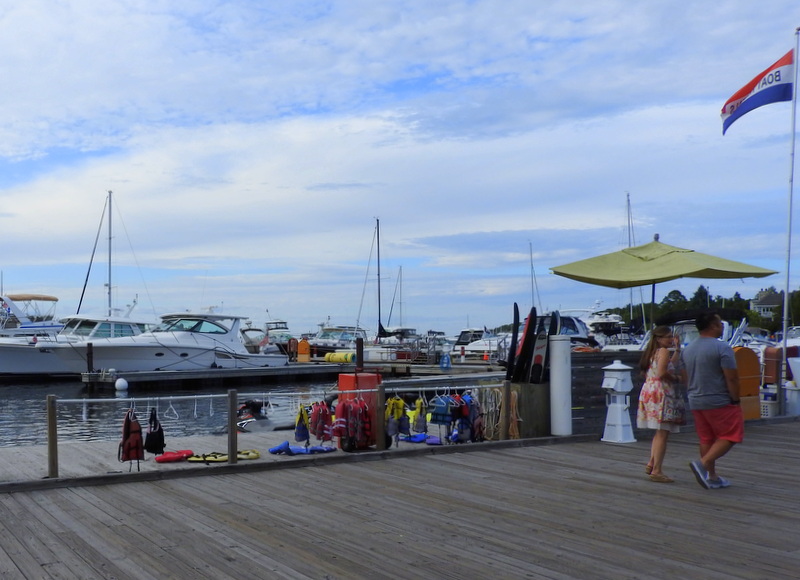 For the adults, there were boats for sale in the marina and there was also a raffle to win a wooden boat.

Originally, the BACA group had been assigned a spot behind the port-a-potties, but as they were beginning to set up, the fire chief invited them to take a spot that was closer to all the foot traffic.  It was perfect!  A bunch of people stopped by just to say they appreciated what the group is doing, and BACA was also given a lot of donations.  A couple of the BACA members are going to be coming up again tomorrow to help Mark with the booth.  Mark was excited about today and is looking forward to manning the booth again tomorrow.