June is a month of celebrations in my family, but this year, particularly so. 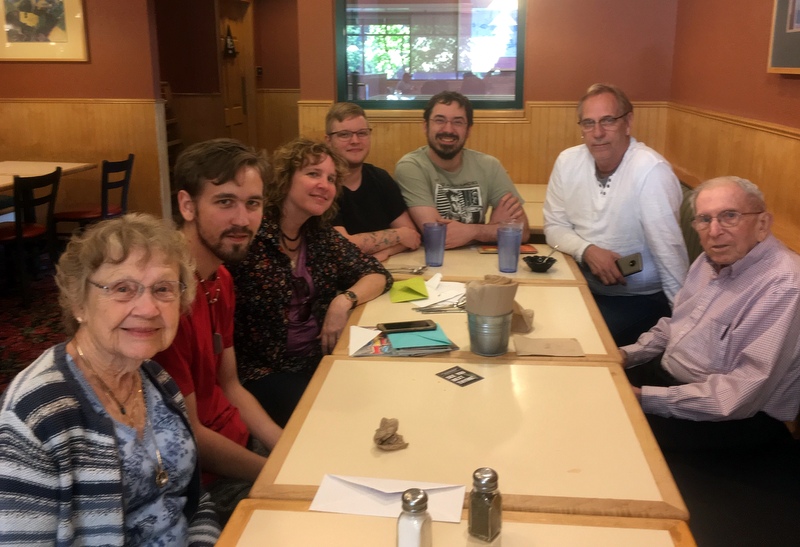 From L-R: Donna, Nate, Lauryn, Sage, Jamey, Rob, and Wayne. The photo was taken by Elaine.

June 16th was Father’s Day.  My father is Wayne, sitting at the far right in the above photo.  This year, my nephew, Nate, graduated from the University of Oregon on the 17th.  Today, the 18th, is Nate’s twenty-first birthday.  The 24th is Jamey and Sage’s twelfth wedding anniversary.  The 25th is my father’s 91st birthday.  The 28th is Jamey’s thirty-fifth birthday.  And, this is the first chance since April that my sister, Lauryn, and her husband, Rob, have had to celebrate their twenty-fifth wedding anniversary.  My mother is Donna, sitting on the far left, and the picture was taken by Elaine who is married to my father.

There is a story behind the white business envelope on the table.  Lauryn wrote a little speech and cut it up in parts for each family member to read.  Each speech was in an envelope addressed to the family member who was to read it.  The speech started out talking about all the birthdays, then Nate’s graduation and Rob and Lauryn’s anniversary, and it built up to revealing to Nate how his graduation, birthday, and his parent’s anniversary is to be celebrated.  On Friday, the three of them are going to fly to Scotland and England for a couple of weeks.  Nate had the final envelope and when he opened it, his part of the speech was, “Yay!”

I saw an extremely short video clip of Nate smiling while Lauryn said “Yay!”  I sure wish I could have been there to see his reaction when he found out where they are going.  Actually, both Mark and I wish we could have gone to his graduation and the family party.  That’s one of the hardest parts about being so far from home.