When Mark and I were still working at Wagon Trail Campground, our boss sent the whole staff to get training to be a Certified Tourism Ambassador (CTA).  One of the perks of being a CTA is that once a year, there is a free special event that we are invited to so that we can tell visitors about it and maybe peak their interest in doing it.  This year it was a cruise to Plum Island. 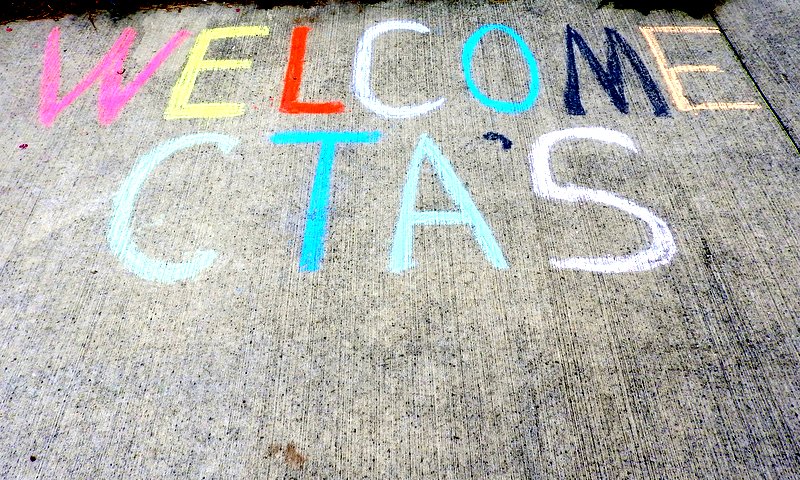 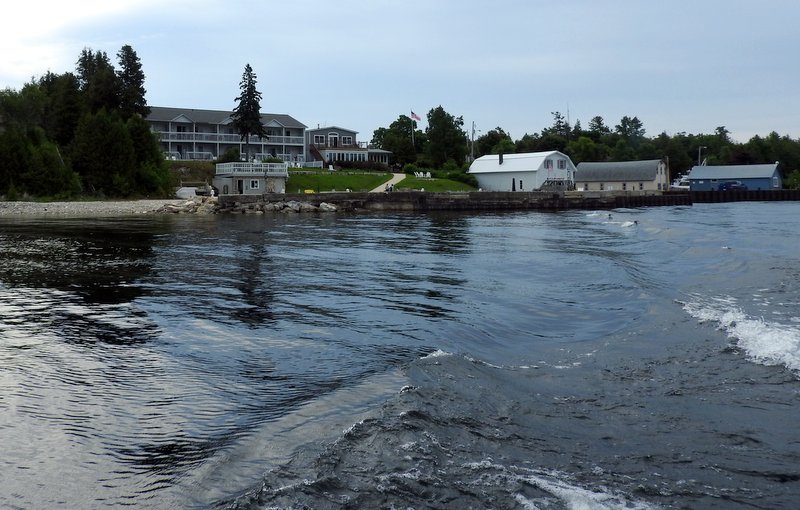 There were so many CTA’s that signed up for the event they had to take two boatloads. We left dock in Gills Rock at the very tip of the peninsula. 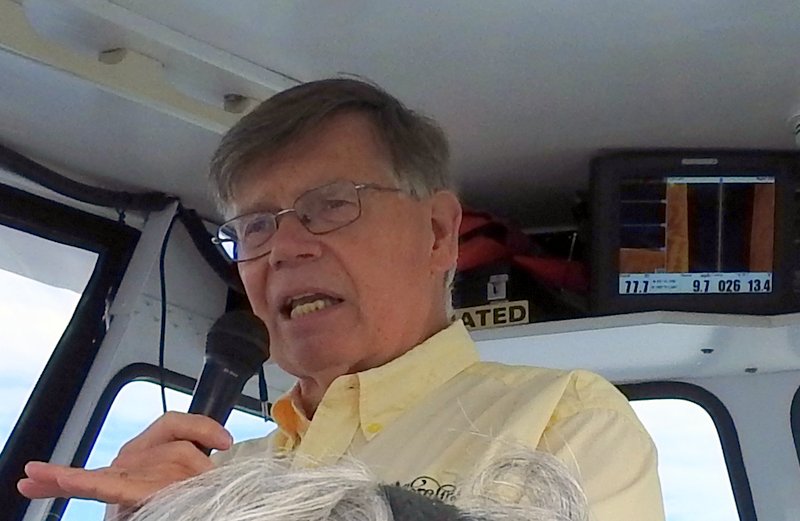 Mike was our tour guide. He told me later he is a Seaquist. I worked for the Seaquists last summer. 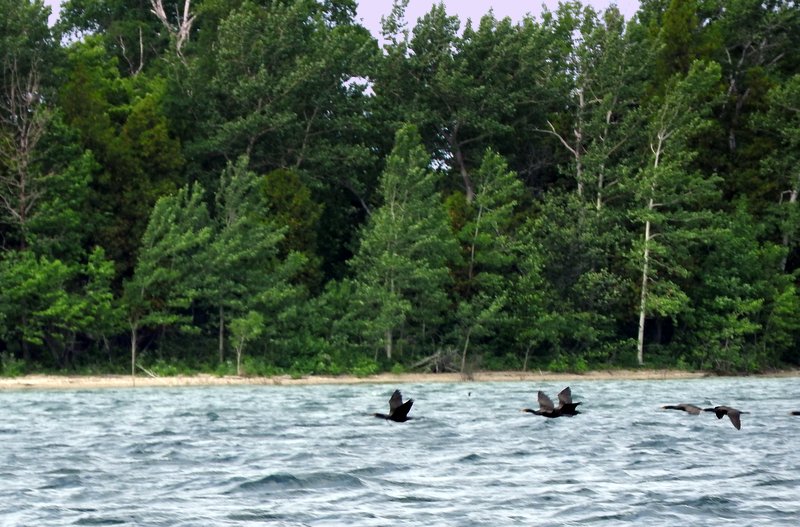 As we approached the dock at Plum Island, we saw these birds. 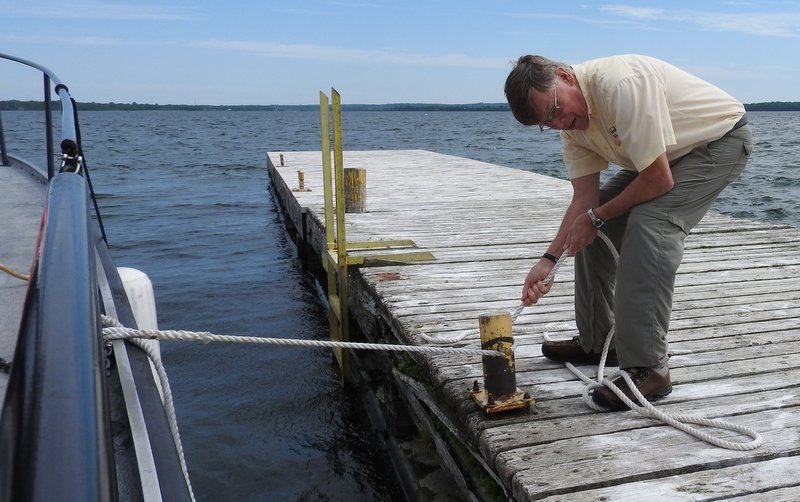 It was very windy and it took quite a bit of maneuvering for Mike and the captain to get us tied in close to the dock. 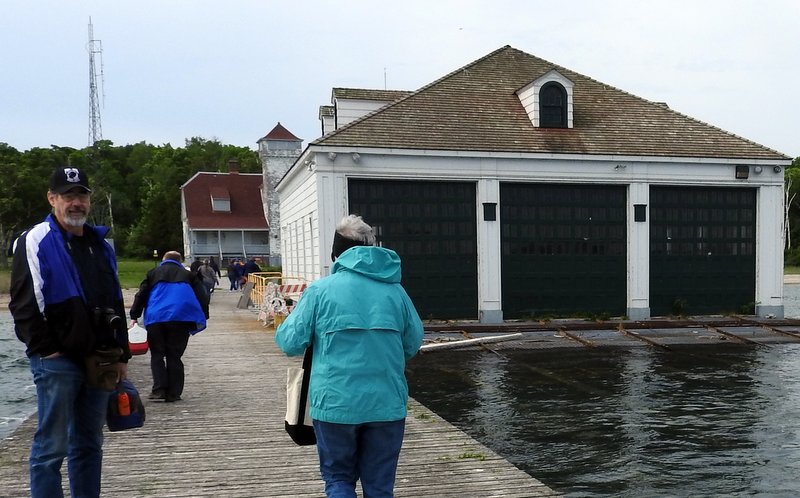 The boat house and the lifesaving station lay ahead when we disembarked.

Plum Island is uninhabited, and until last year, it was off limits to tourism.   It used to be operated by the Coast Guard and they’d rescue the people on ships that had run aground or sunk.  The Coast Guard moved to a new location in 1969 after the range lights here were automated.  We discovered we know someone who used to live out on Plum Island when he was in the Coast Guard.  He’s now the other captain of the Shoreline Cruise we were on. 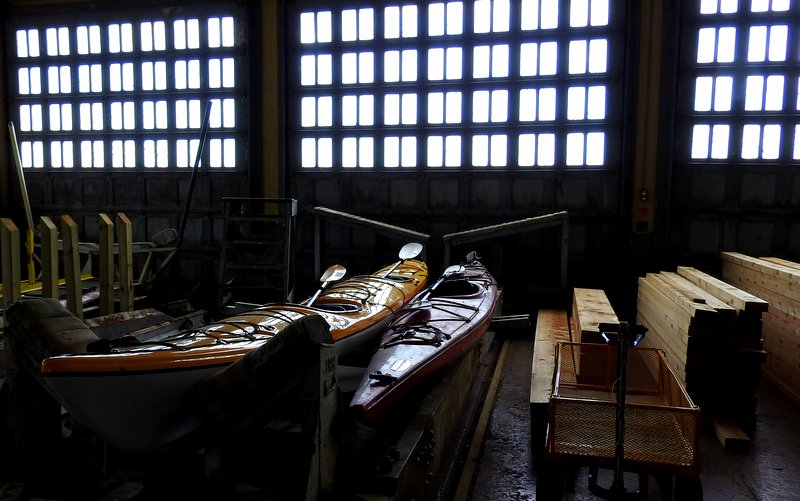 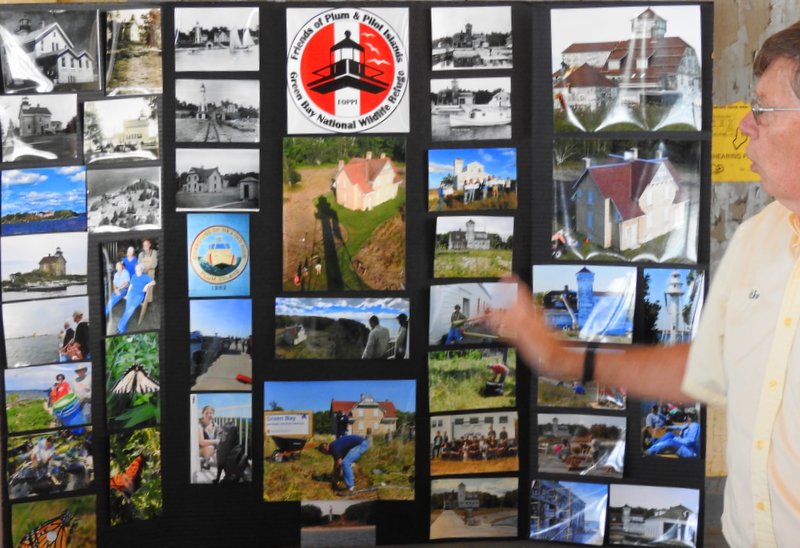 Mike gave a talk about the history of Plum Island and Pilot Island which had the actual lighthouse. 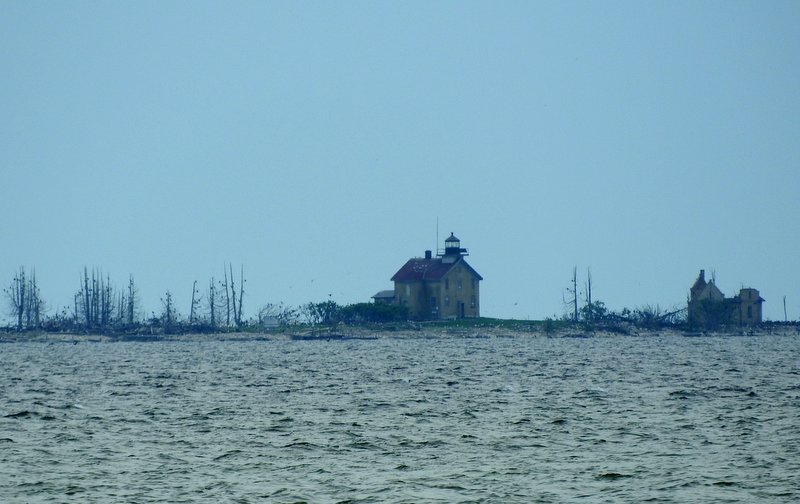 Pilot Island as seen from the dock on Plum Island

Pilot Island has been declared a bird sanctuary for migratory cormorants.  The lighthouse is automated and still works, but as you can see from the collapsed roof on the keeper’s house to the right, no one inhabits Pilot Island anymore.  Cormorants have no oil on their feathers, so when they get wet they sit in the trees and spread their wings to dry out.  While they sit in the trees, they defecate and their droppings are toxic.  The trees are all dead as a result.  The guano is so thick on Pilot Island that I’m told the ground is spongy to walk on.  The cormorants stick to Pilot Island because Plum Island has eagles and other birds of prey.  The only people allowed on Pilot Island now are people who have an official reason to be there.  The tour boats don’t even get particularly near it. 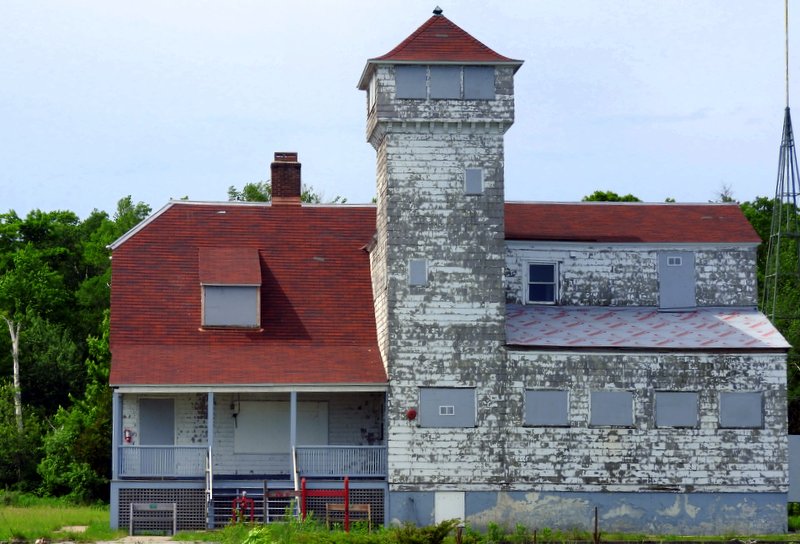 The lifesaving station with a watchtower. The Friends of Plum and Pilot Island (FOPPI) are trying to raise funds to fix this building and open it up. 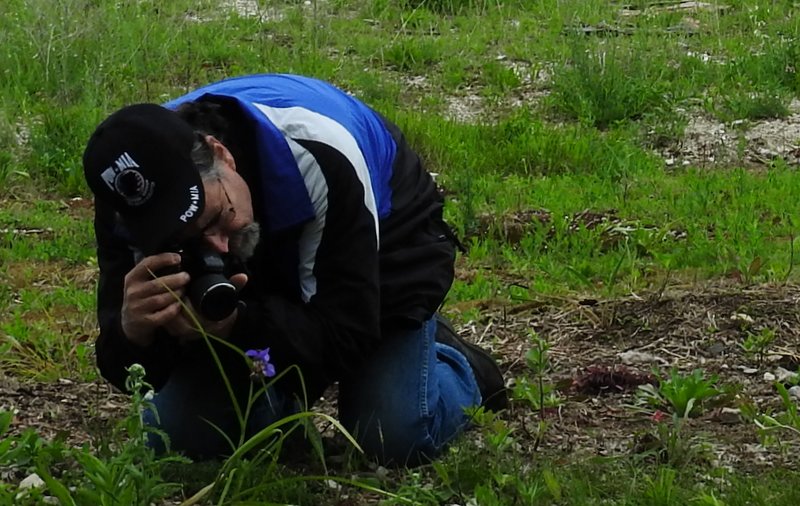 We were on the first boat and had a little time to kill before the second boat arrived. Mark and I used the time to take photos. 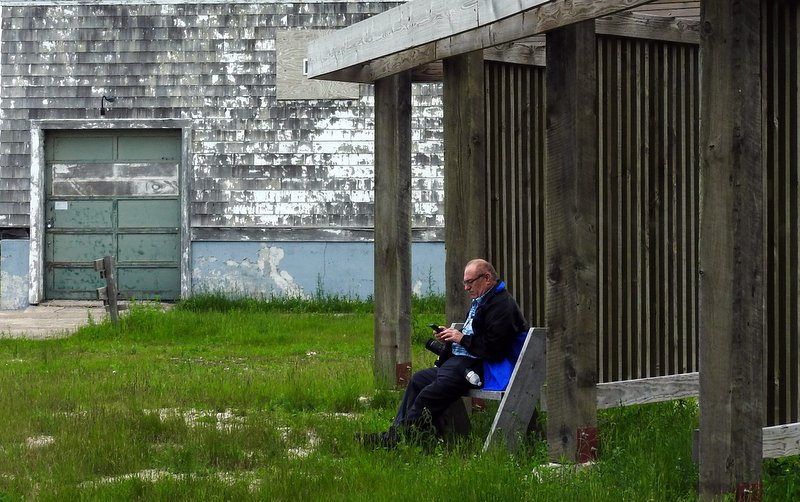 Other CTA’s explored or sat and waited. 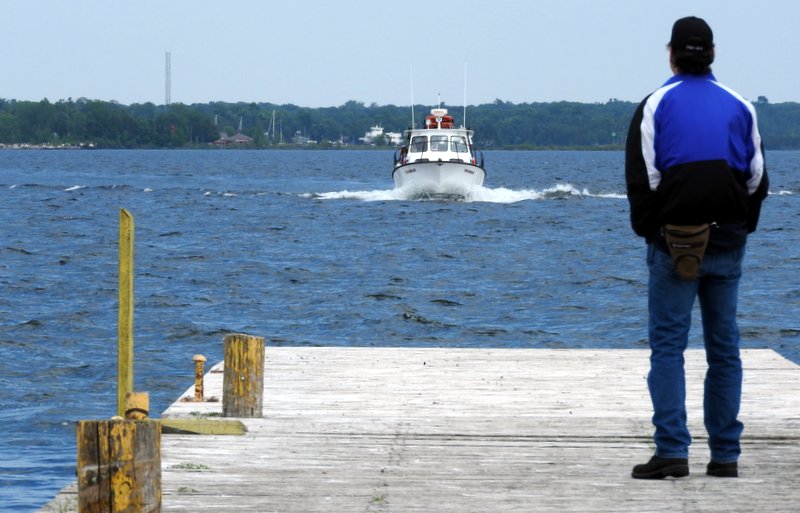 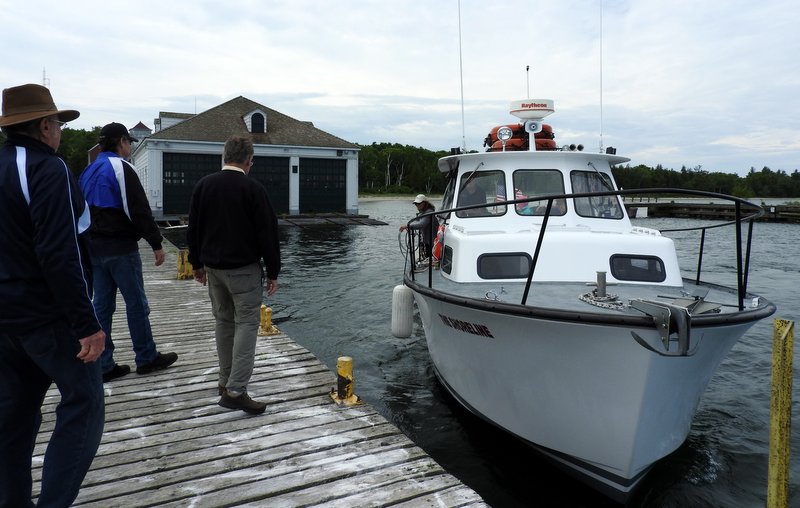 There had been so much difficulty docking when the first boat arrived that several men stood by to help the second boat. 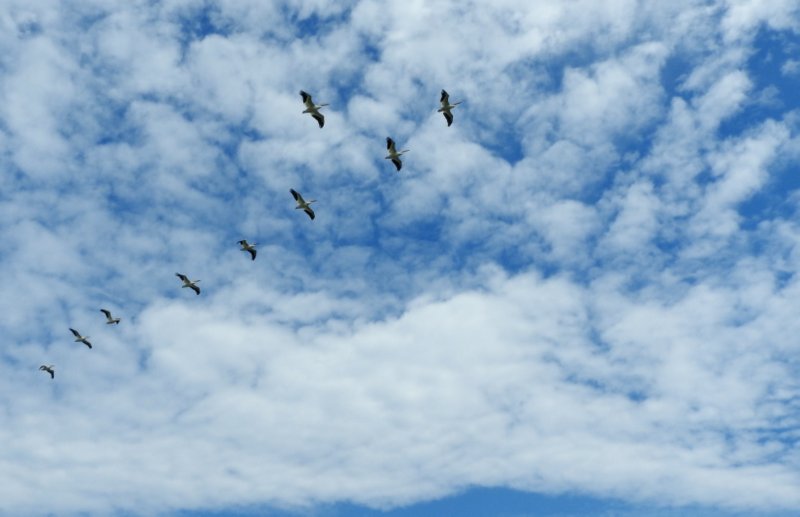 A flock of pelicans flew overhead 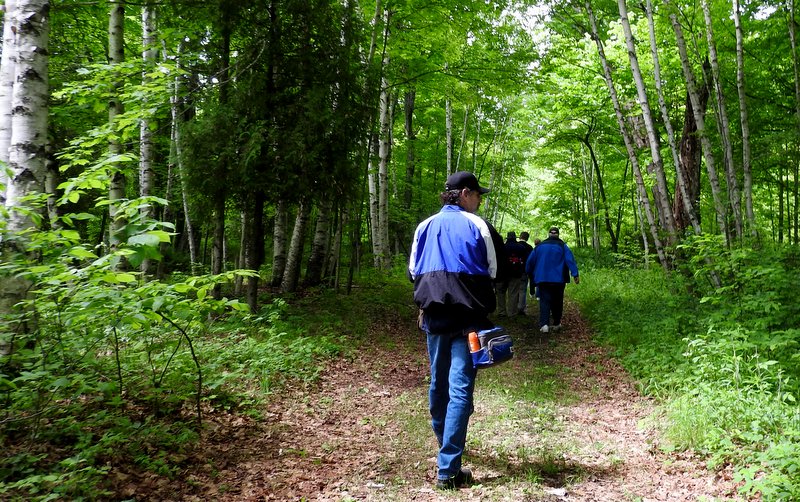 With the group at last united, Mike led us on a hike across the island. 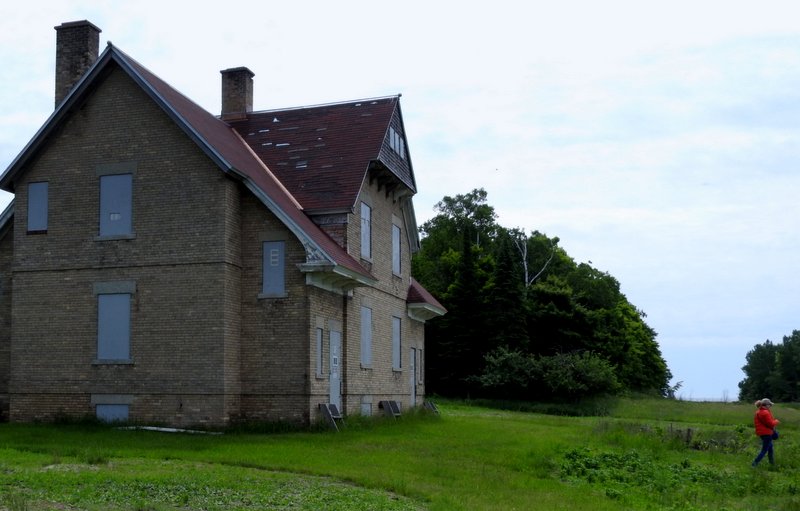 This was the light keeper’s house and I guess the second in command also lived here. Sailors who had been rescued from shipwrecks stayed here, too, while waiting to be picked up. 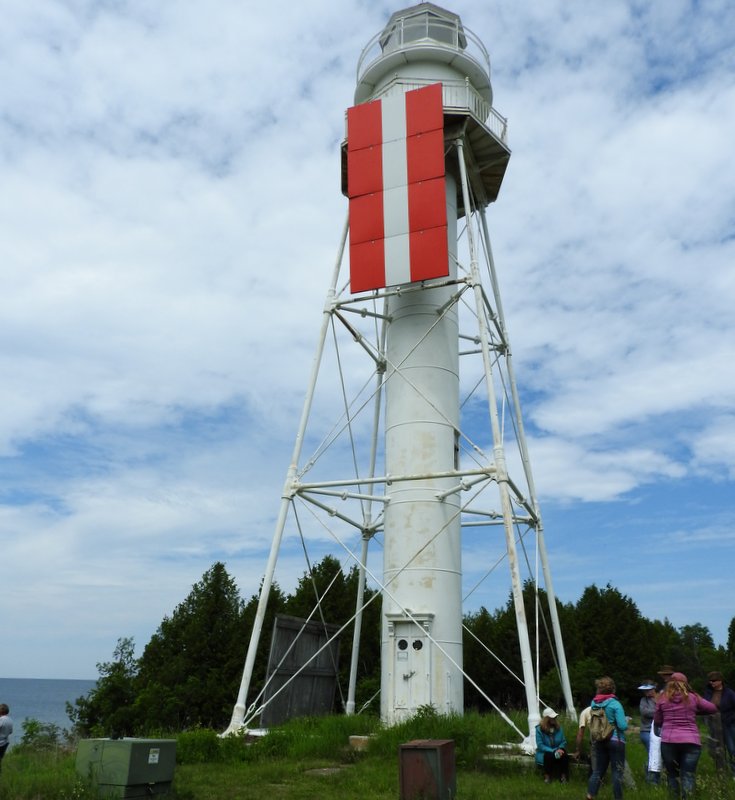 This is called the second range light because it is taller and lines up behind the first range light. 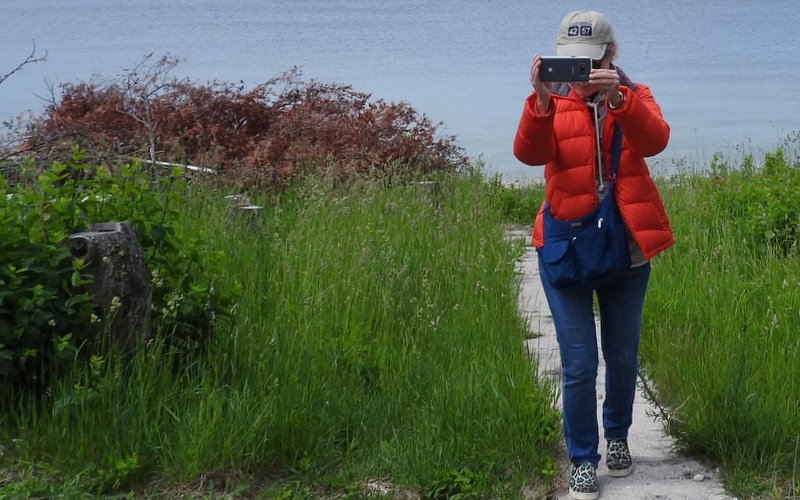 My boss, Mickie Rasch, doing the classic you shoot me while I shoot you! 🙂 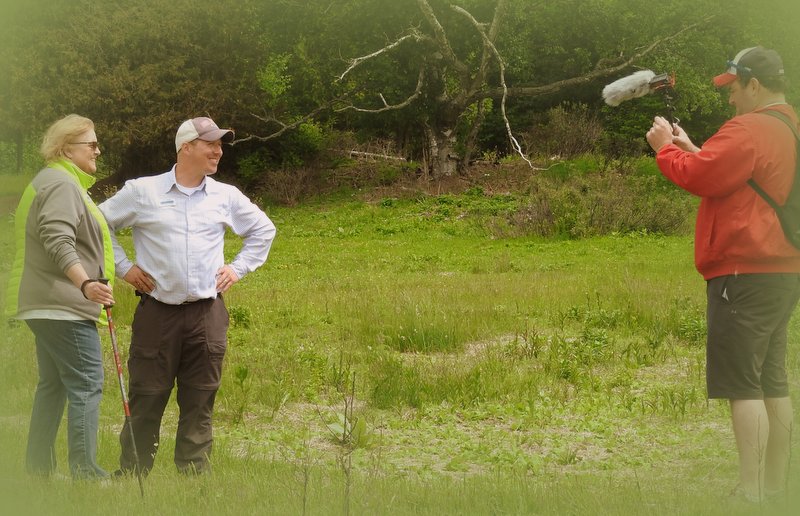 The Visitors Bureau in Sturgeon Bay is kind of over all the visitor centers on the peninsula.  They are the ones who trained all of us CTA’s and they organize these annual outings.  The video they were shooting was to advertise the CTA program and try to get more people to go through it.  In this video, they were talking about the perks of becoming a CTA and they told a little about this event:  (https://www.facebook.com/doorcountyCTA/videos/2119729988054598/) 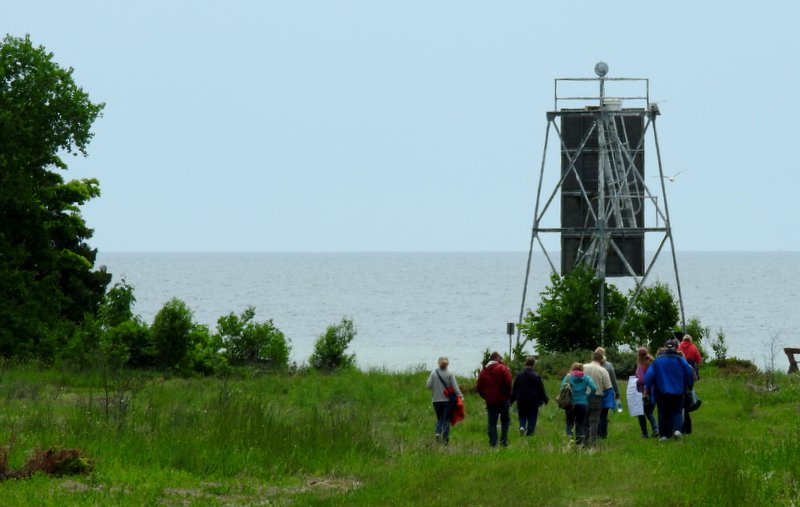 We all started to head to the first range light, but this is as far as Mark and I got before they started saying the first boat group needed to head back to the dock. 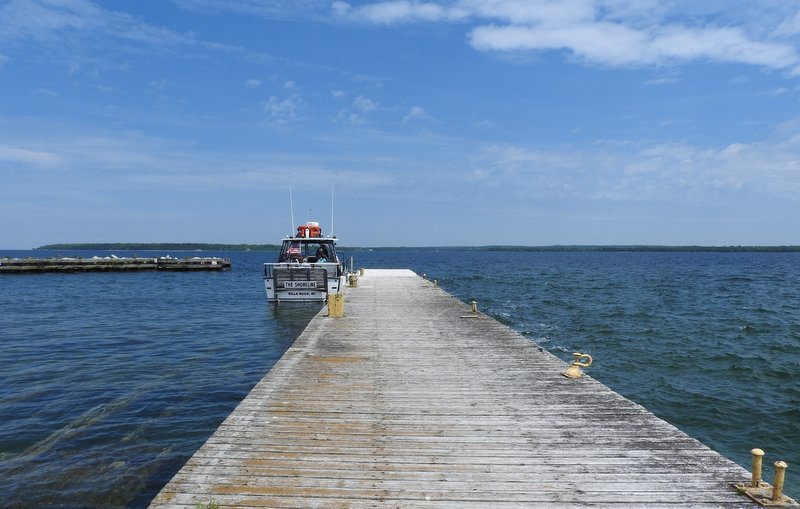 Our boat was already there waiting for us. 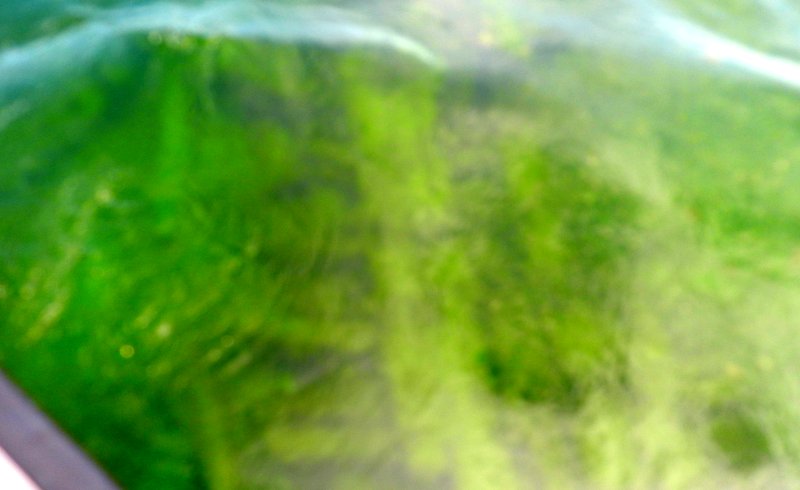 On our way back toward the mainland, the captain took us over the wreck of the Grapeshot which went down during the Civil War. 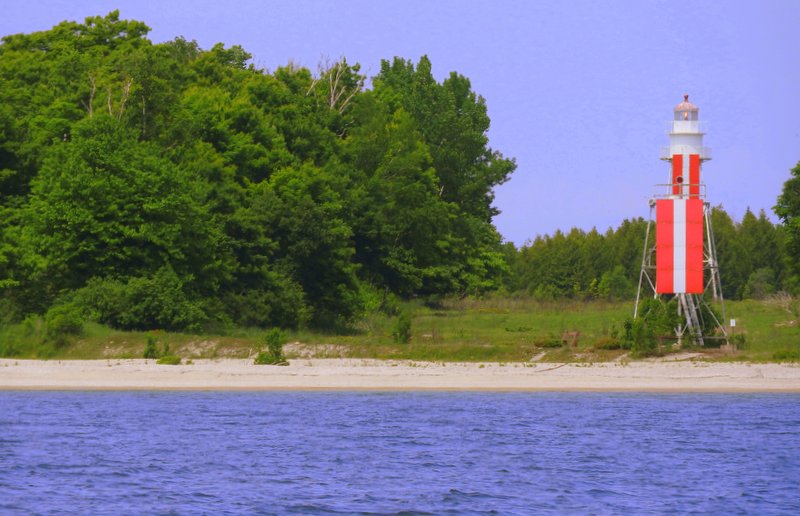 Range lights one and two lined up.  From this angle it’s hard to tell that they are 1,650 feet apart! 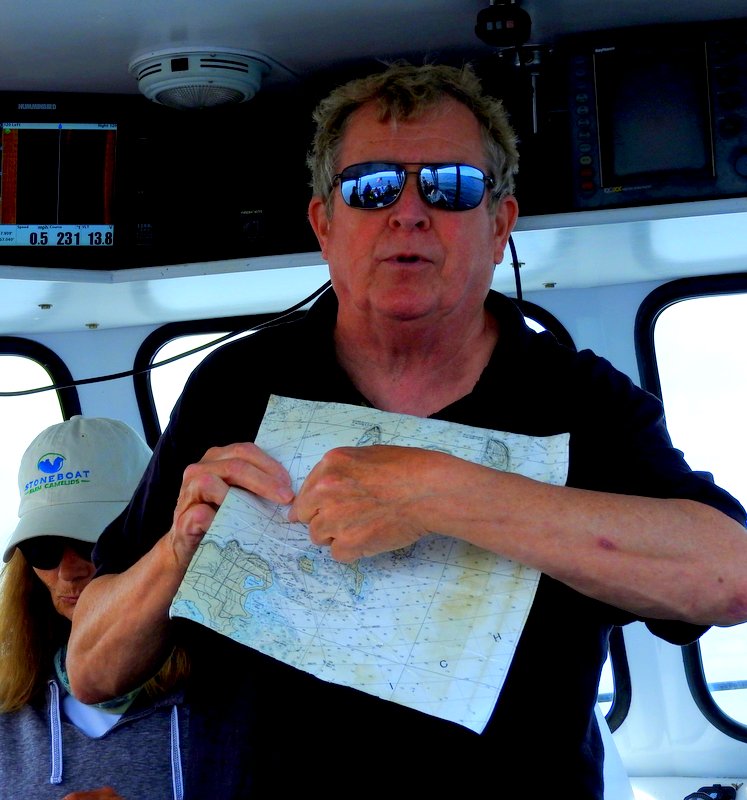 Captain Robinson explaining to us that lining up the range lights helps sailors know where the channels are for getting between the tip of the peninsula and the islands. 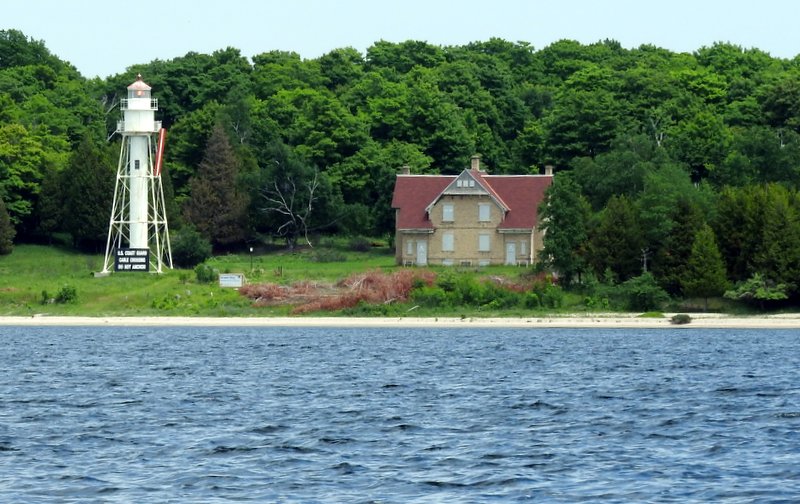 The spot we’d been earlier as seen from the water.

When we got back to Gills Rock and disembarked, one of my co-workers handed out bags of goodies and coupons for businesses in Liberty Grove.  Some of the CTA’s who had come up rarely get this far north, so this was a way to acquaint them with things to do up here.  One of the coupons was for the Savory Spoon which is a cooking school a couple doors away from the Ellison Bay Visitor Center.  The proprietor was waiting at the Savory Spoon with some fresh-baked chocolate chip cookies for the CTA’s who went on this tour.  I have walked past the Savory Spoon before but had never been inside.  I took the opportunity to get a picture of the gift shop in there: 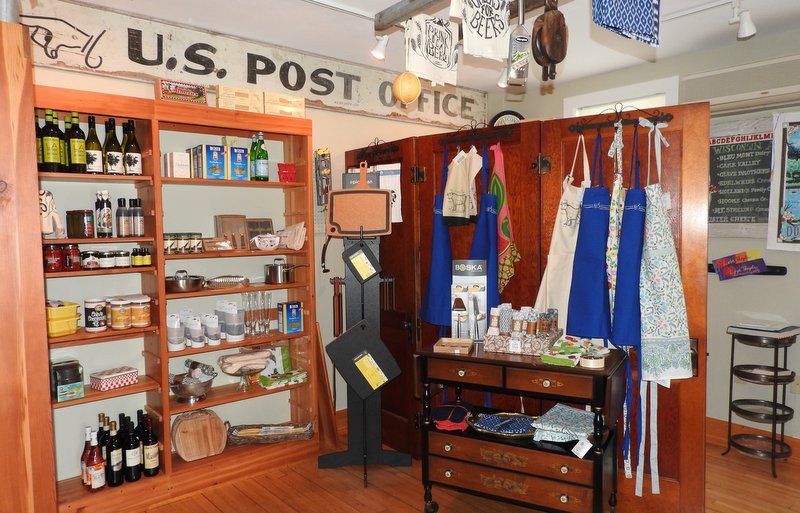 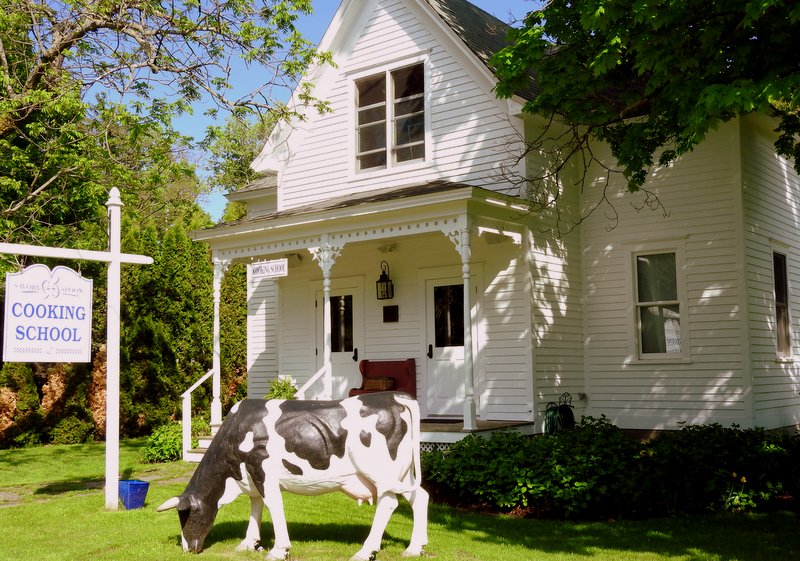 This is what the school looks like on the outside.

After getting our free cookies, Mark headed to work and I went to take the afternoon shift at the Visitor Center.  Now I can tell anyone who asks about the Plum Island tour.