I finally convinced Mark to go on an outing with me yesterday.  My father has described to me, several times, a place he would like us to visit before we leave here and we started out to go there, but we got sidetracked when we stopped at Old Tucson on the way…

Old Tucson is the Hollywood of the southwest.  It was started in the 1930’s as a set for shooting western movies and TV shows.  Bonanza, High Chaparral, John Wayne movies, and even more recent movies like Tombstone have been shot here. 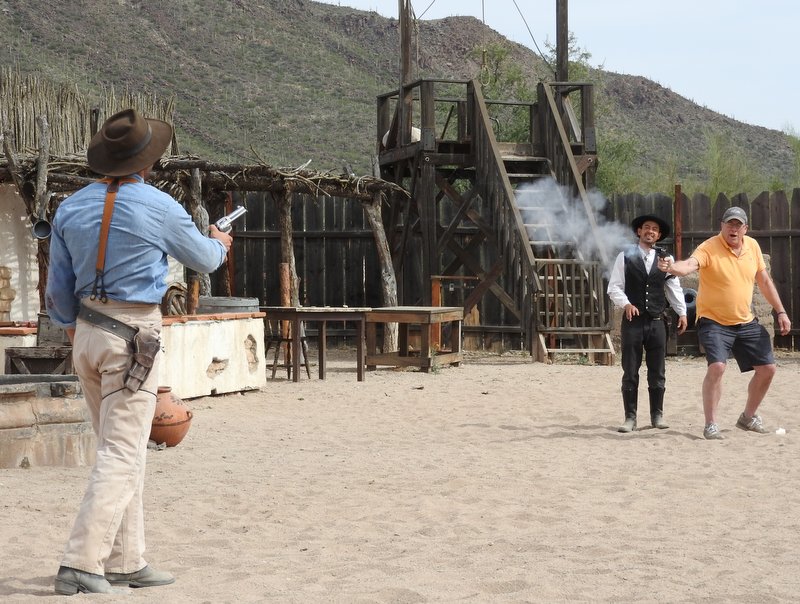 We started off watching a demonstration of how they shoot gun fights. Here, they pulled someone from the audience to demonstrate that they aim the gun in the general direction of the other actor but not right at him. The bullets aren’t real, but at high velocity, they could hurt nevertheless. 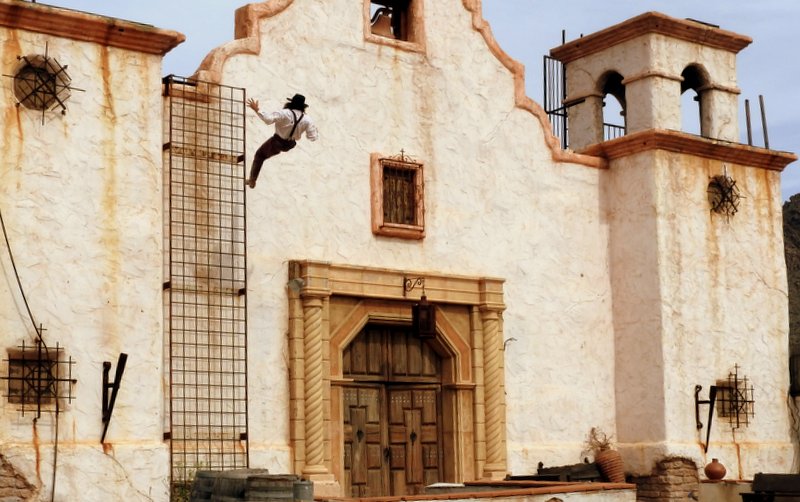 One of the stunt men demonstrating a fall after being “shot”.  You might recognize this mission from the opening scene of “Tombstone”. 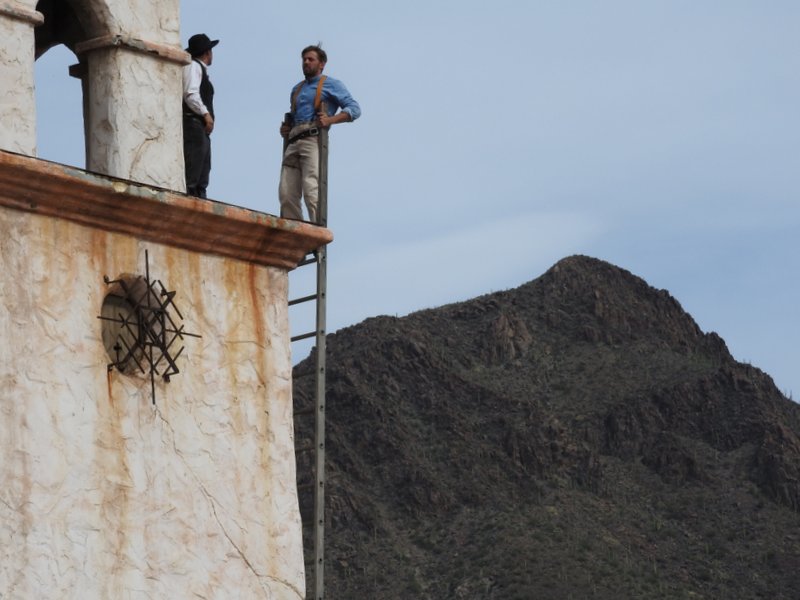 This stunt man had the ladder pushed away from the wall and he fell. 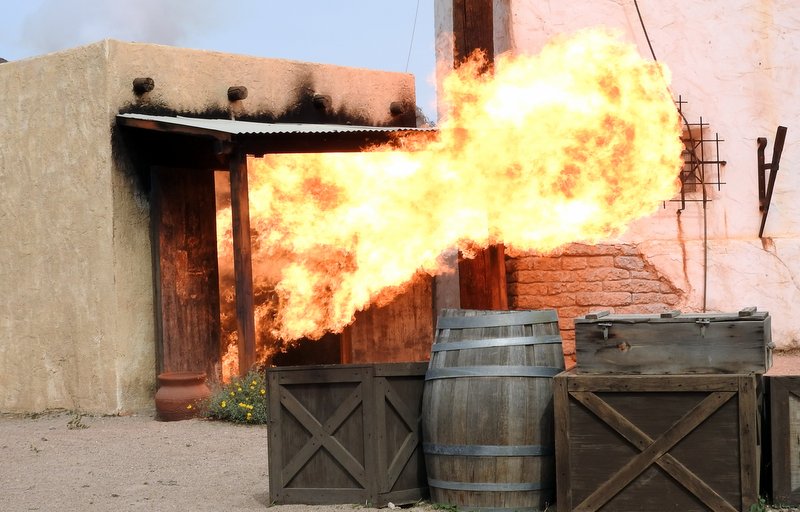 Here they demonstrated a fireball coming out of a “bombed” building.

After the demonstration, we continued to walk around the set. 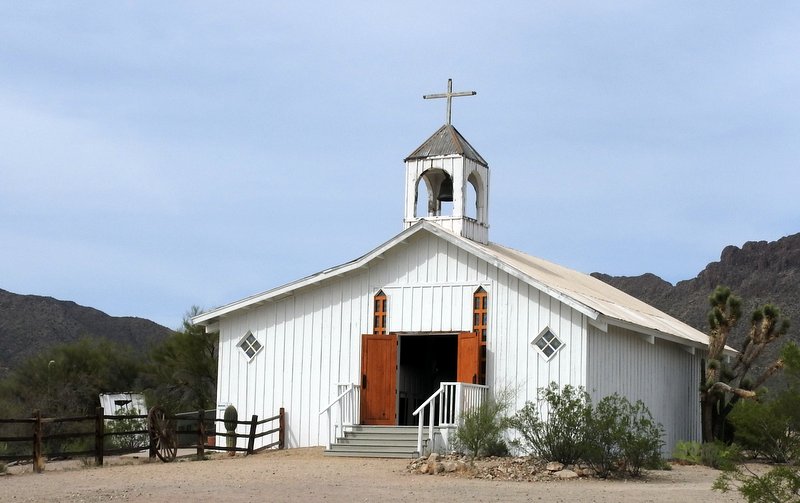 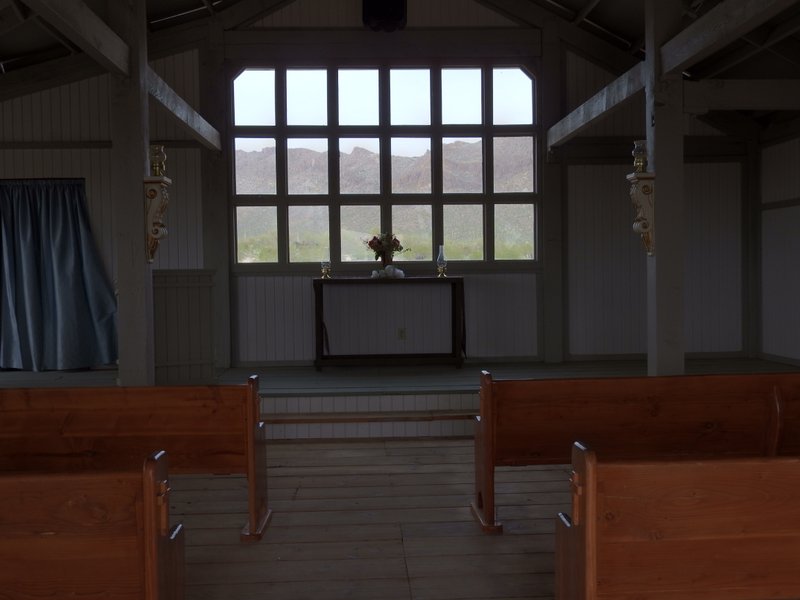 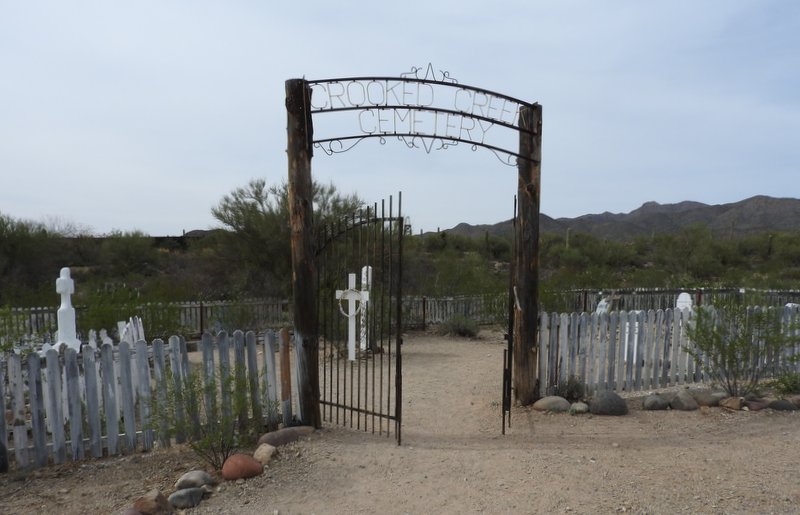 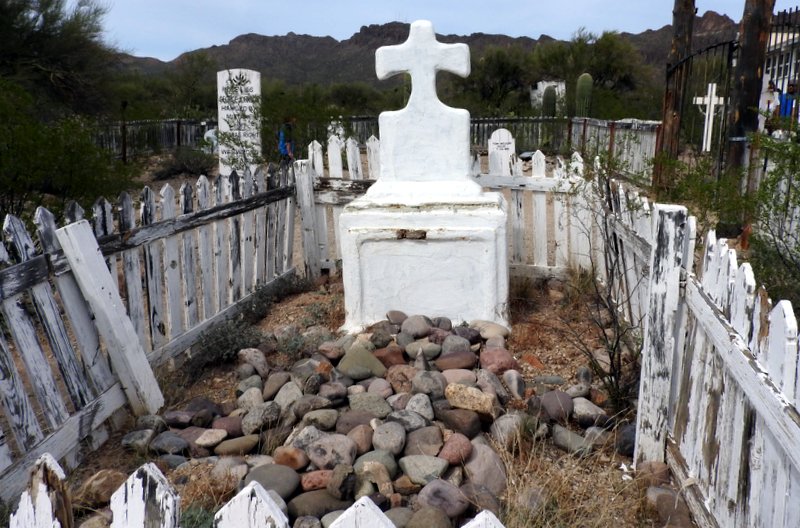 One of the graves 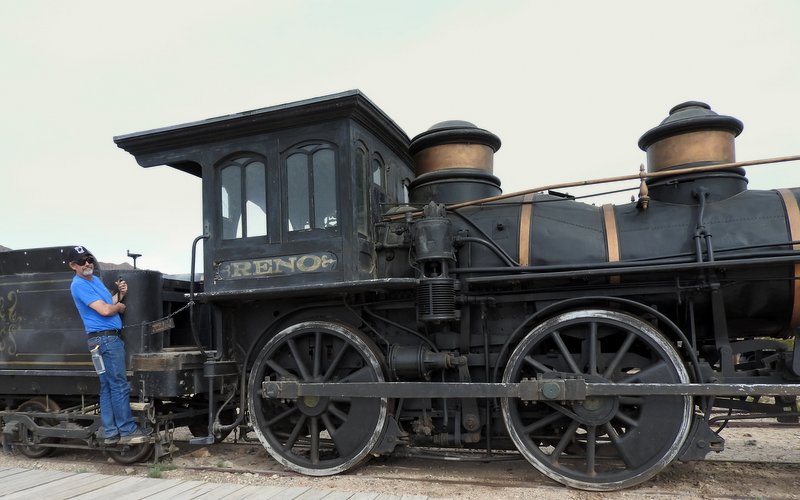 One of the most filmed trains 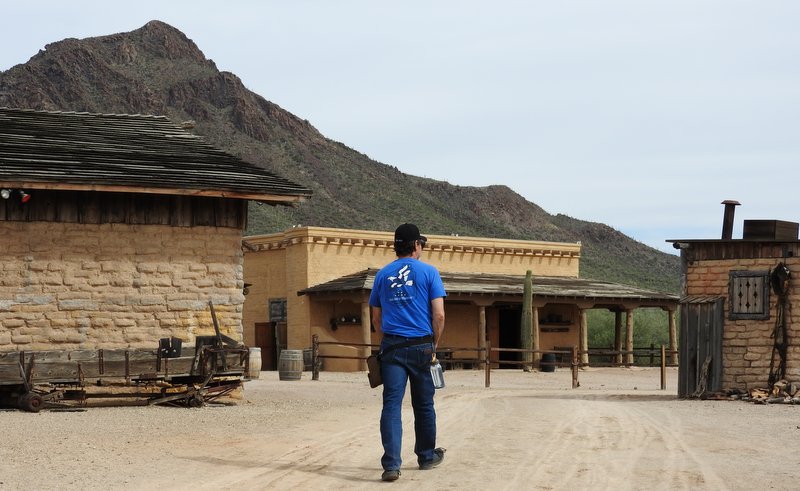 Mark walking onto the set of High Chaparral, one of his favorite shows as he was growing up. I heard a tour guide saying that the mountain behind this set is the most photographed in westerns. 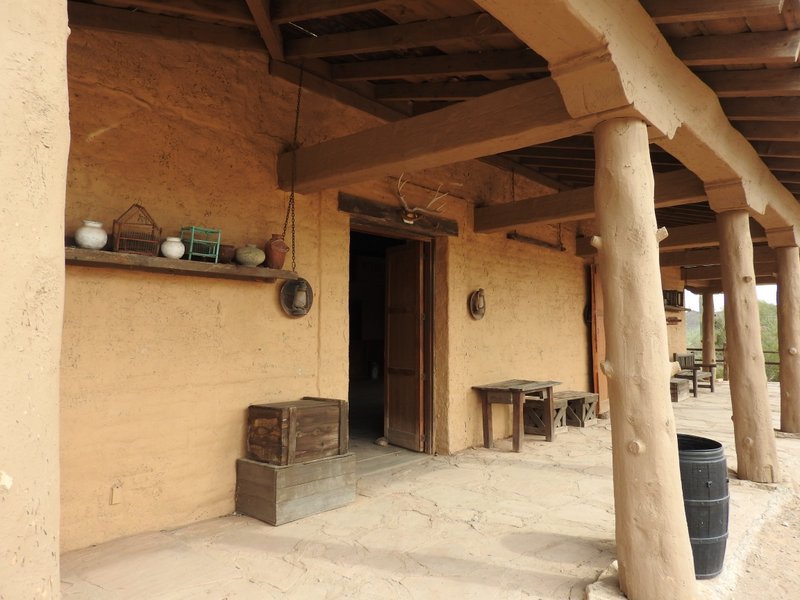 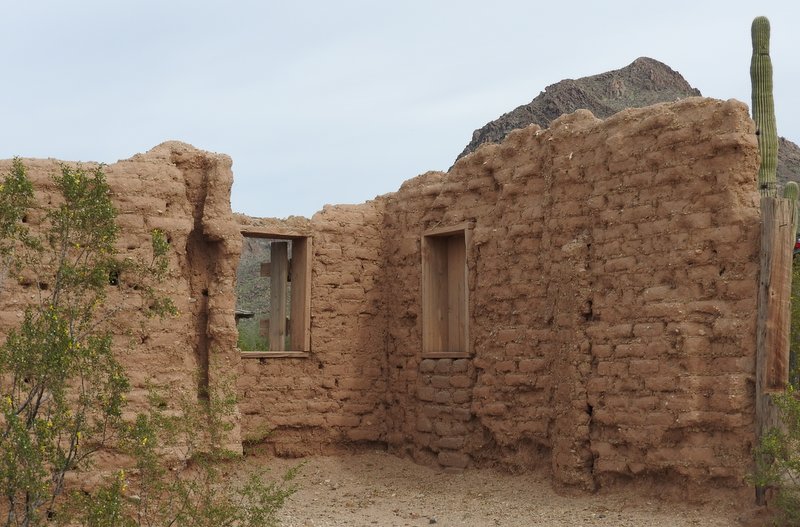 Mark remembered this structure from a John Wayne movie, possibly from “Rio Lobo”. 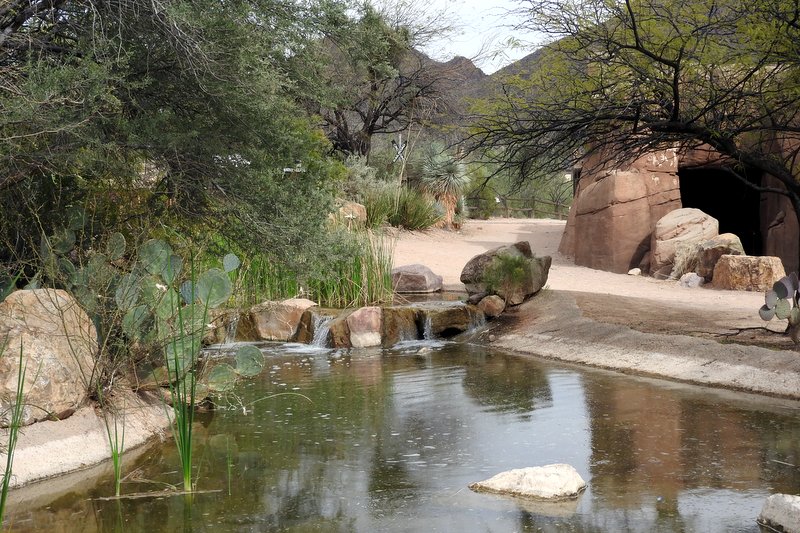 This man-made Rio Lobo site is where John Wayne made a hostage exchange in the movie of the same name. 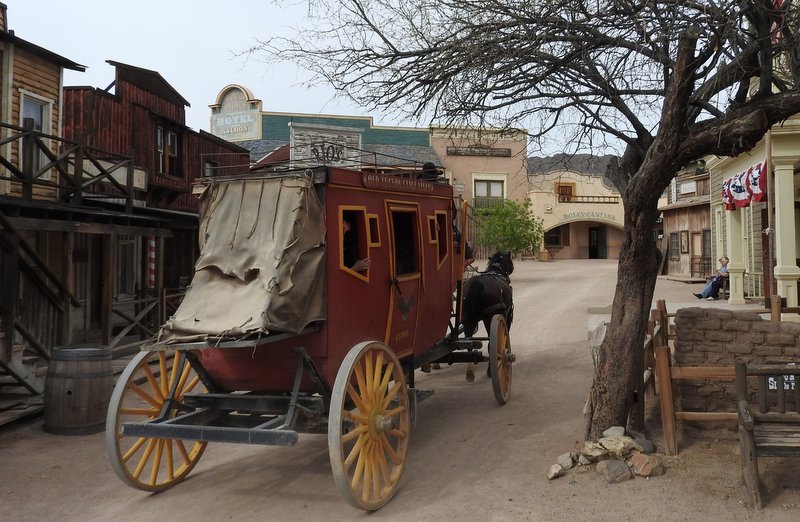 A stage coach riding into town. (They give stagecoach tours for a fee.) 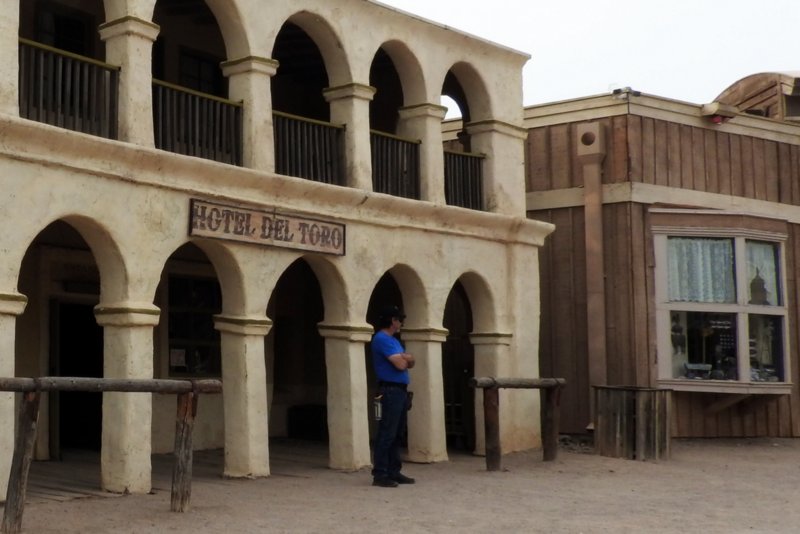 Mark standing in front of a hotel 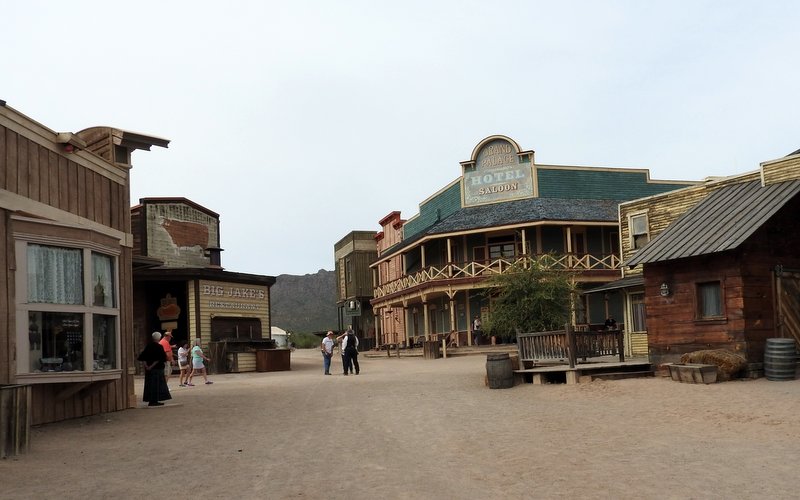 A street scene.  Most of the shops and restaurants actually are used as such for tourists like us. 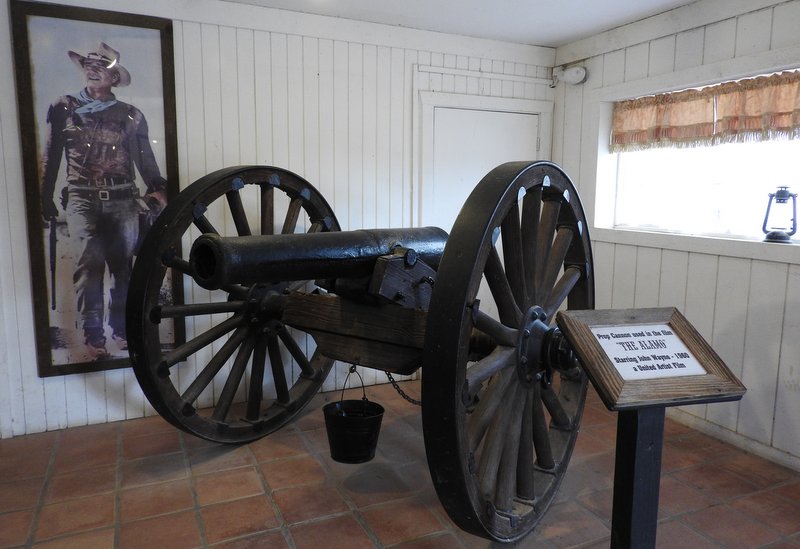 There was a Hollywood museum with lots of props, like this cannon from the John Wayne movie “The Alamo”.

Some of the clothing in the museum brought back memories to Mark and me.  He found a dress worn by the woman in High Chaparral that he remembered seeing on her when she wore it.  I was interested in the clothing from Little House on the Prairie.  They had clothing for each member of the Ingalls family as well as the clothing for the Olesons!  (Remember Nellie Olson?)

We spent most of the afternoon at Old Tucson, and by the time we got to the Arizona Sonora Desert Museum, which Dad wanted us to see, it was nearly closing time.  We’ll have to try again before we leave.

There was one last thing we got to see…Saguaro National Park West.  There are two Saguaro National Parks in Tucson: this one on the west side and another on the east side.  This is possibly the most interesting since there are several other things to see close by. 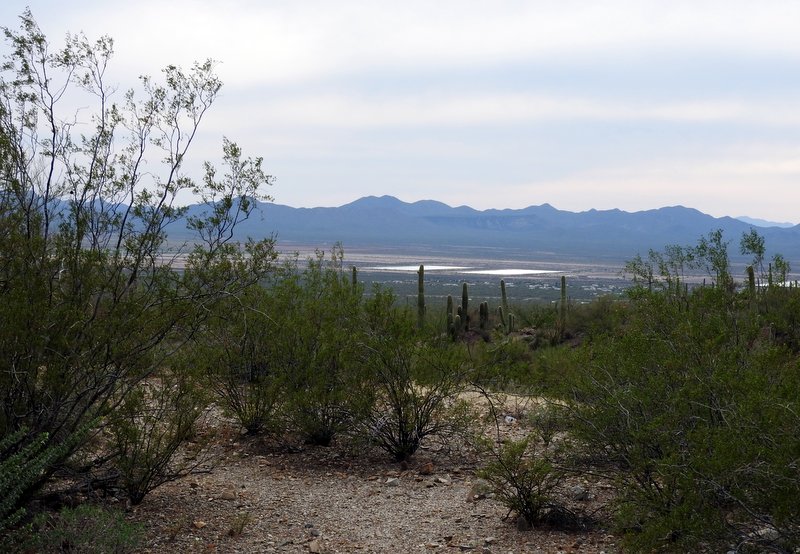 You can see how high this part of the desert is.  That’s the valley down below with what appears to be water reservoirs. 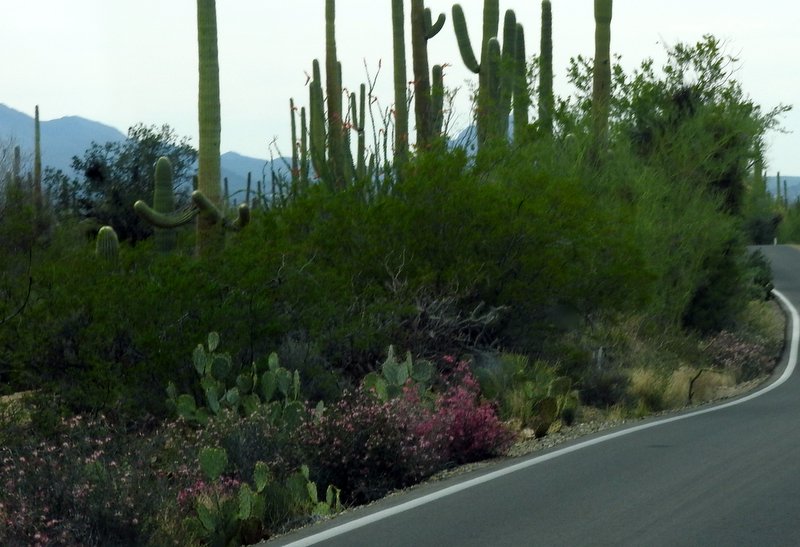 I have noticed lately that things are beginning to bloom, like these wildflowers along the roadside 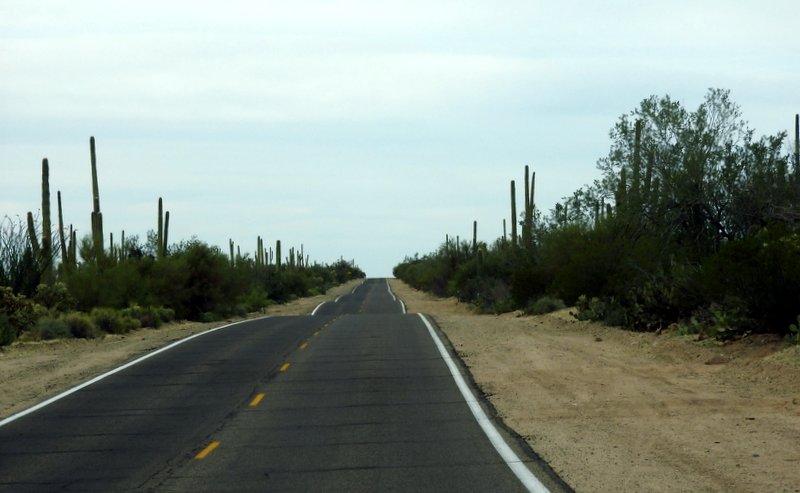 A bit of a rollercoaster 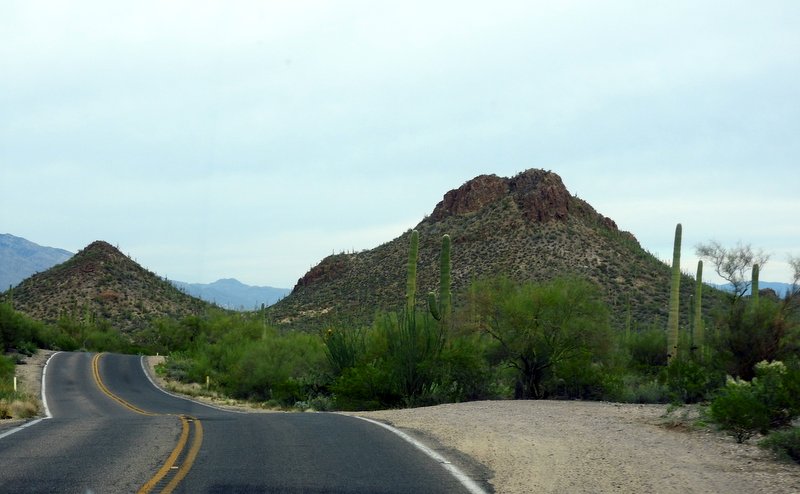 I have heard that the mountains here came from volcanoes. 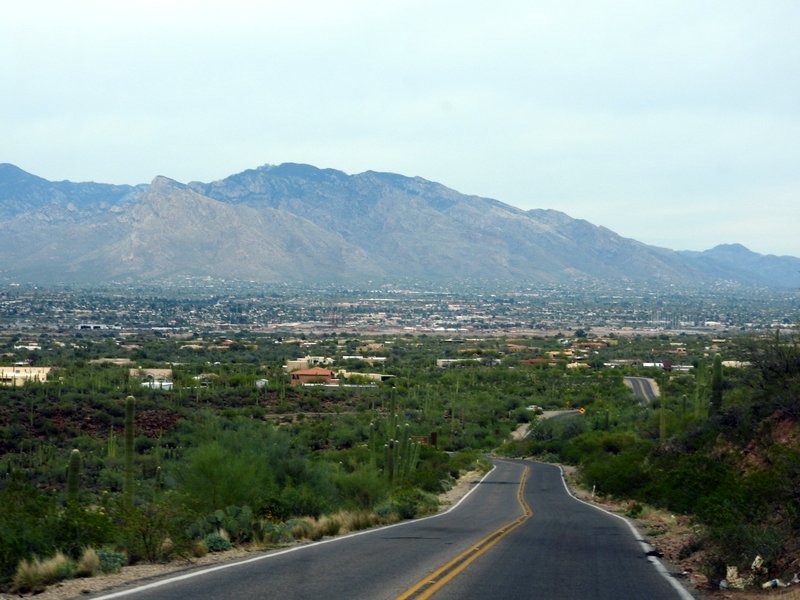 The road we took yesterday was perfect for a motorcycle ride, so since Mark had today off, he took his Harley back over the route we covered yesterday.  I think it’s destined to become a new favorite!