Judy, whom I call the president of my Wisconsin fan club, and her husband, David, live south of us about an hour’s drive during the winter.  Today, Judy and David and Mark and I met in Tombstone for a fun afternoon.

Tombstone is most famous for the gunfight at the OK Corral.  Wyatt Earp, his brothers, Virgil and Morgan, and his friend, Doc Holliday, met Ike and Bill Clanton and Frank and Tom McLaury in the alley of the OK Corral. 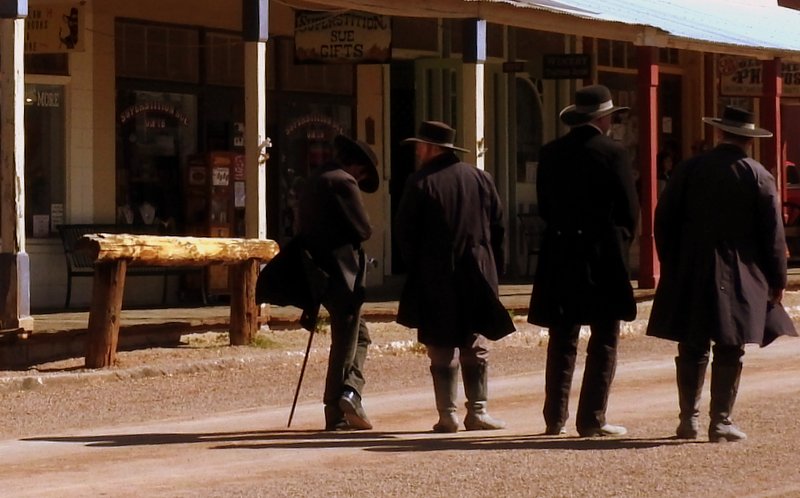 The Earps and Doc Holliday walking down the street toward the OK Corral. 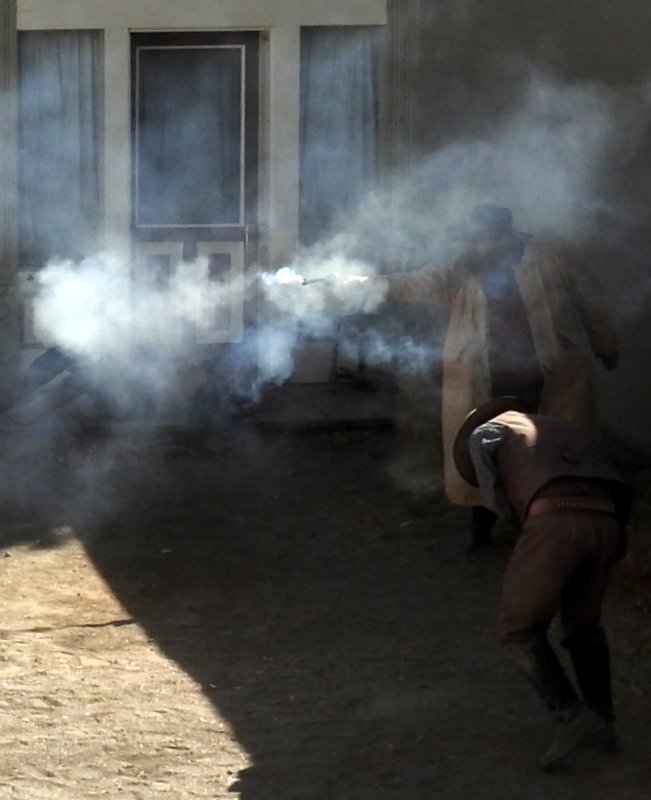 Stories differ as to who fired first, but according to Marshall Virgil Earp, Bill Clanton and one of the McLaurys started it. 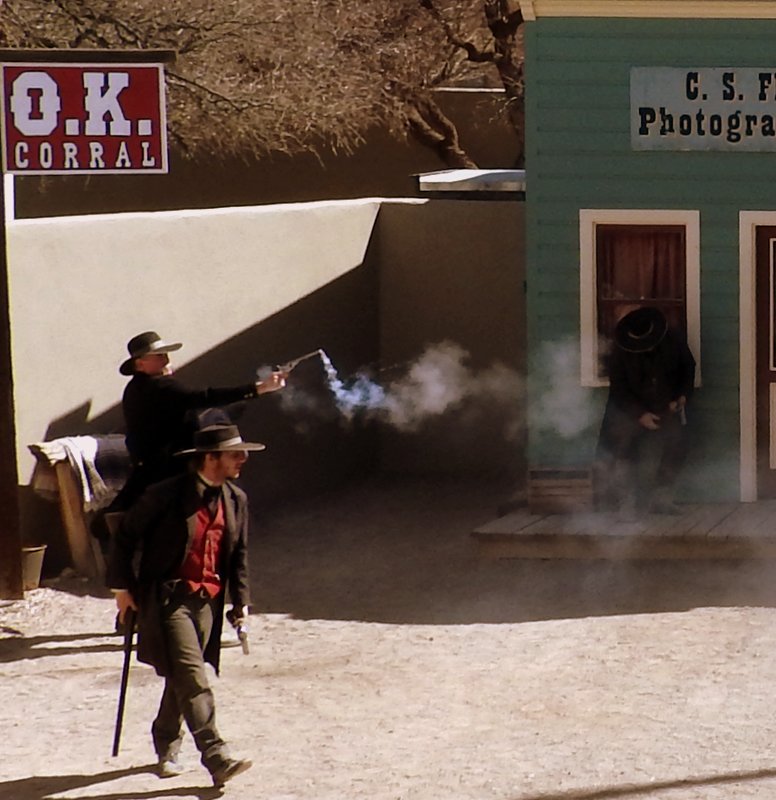 Virgil Earp was shot in the right leg. Morgan Earp was shot through the shoulders. Doc Holliday was hit in the left hip. Wyatt Earp wasn’t hit at all. They all kept firing. 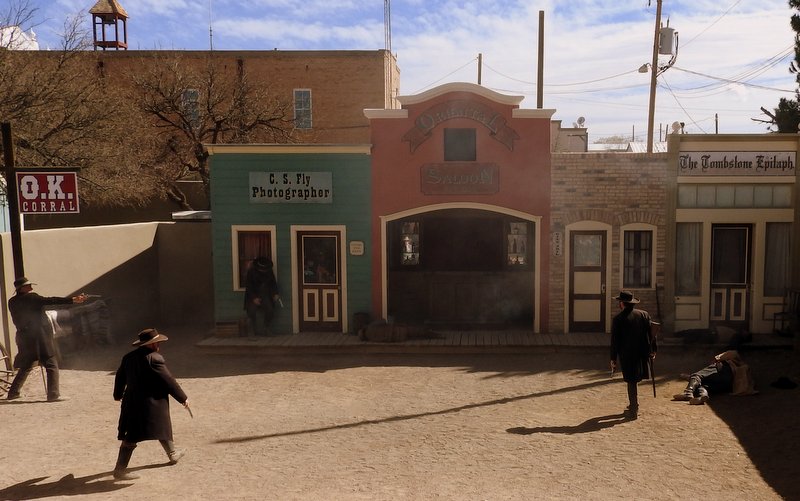 Within thirty seconds, the shooting was over. Tom and Frank McLaury and Billy Clanton were dead. Ike Clanton, who had fled unarmed, survived. 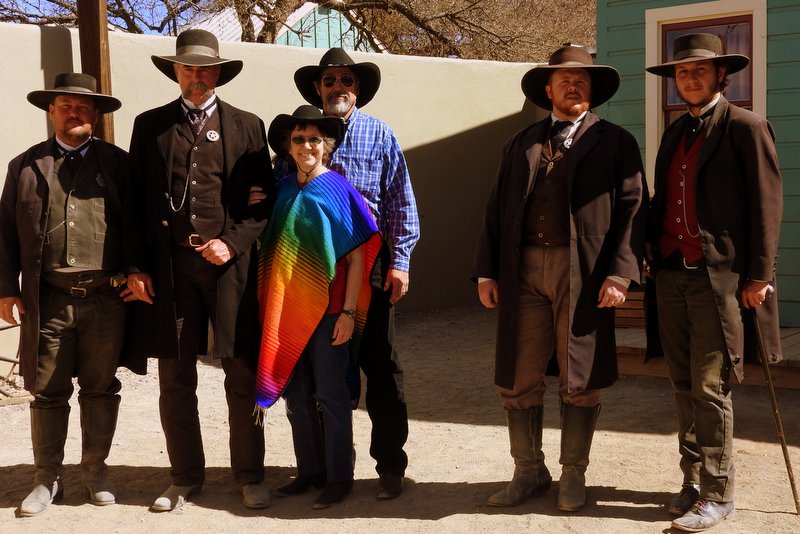 Mark and I got our pictures taken with the good guys!

After the shootout, we and our friends looked around a bit. 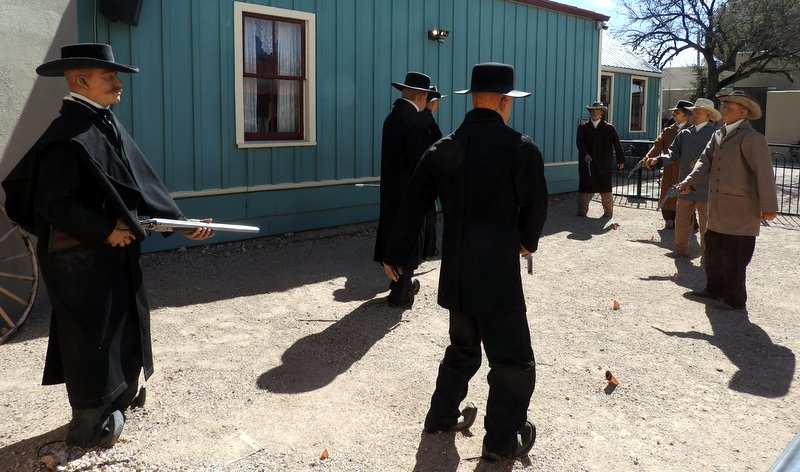 Statues set up in the positions of the fighters. 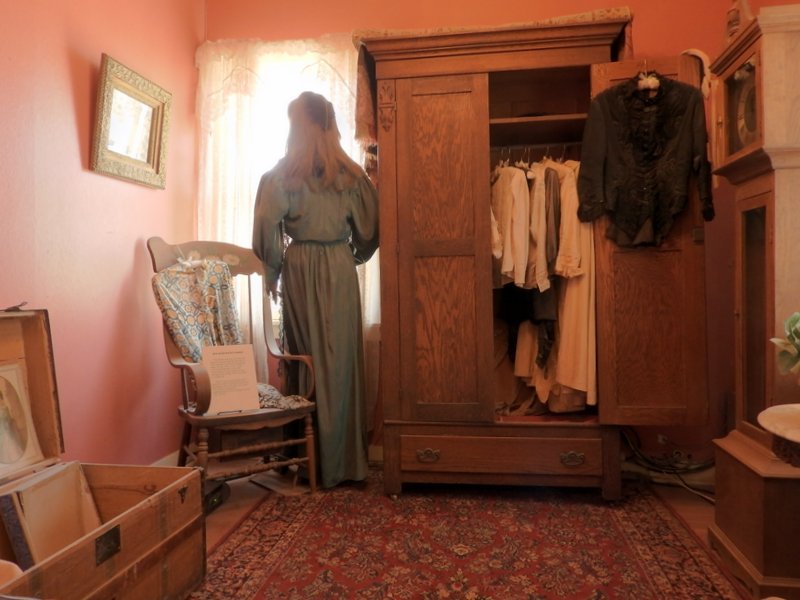 Doc Holliday’s girlfriend, Big Nose Kate, was watching the fight from the window of Doc’s room. 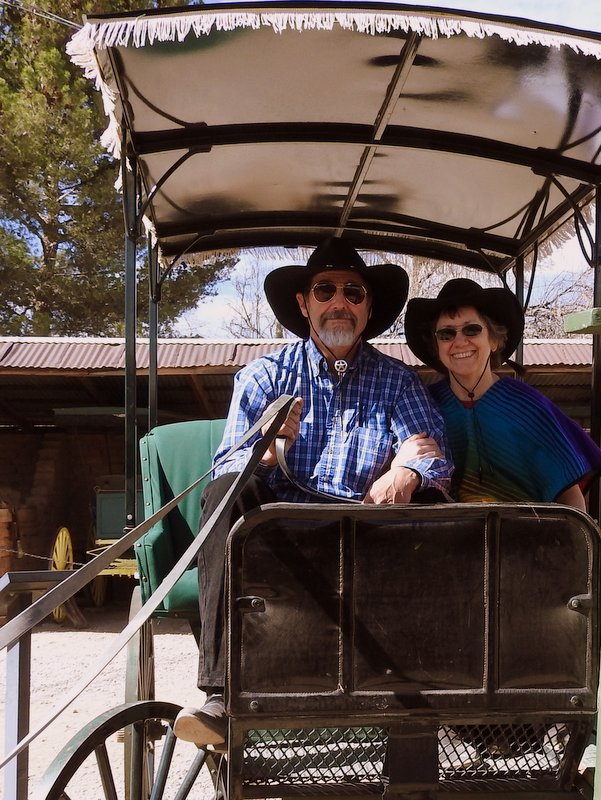 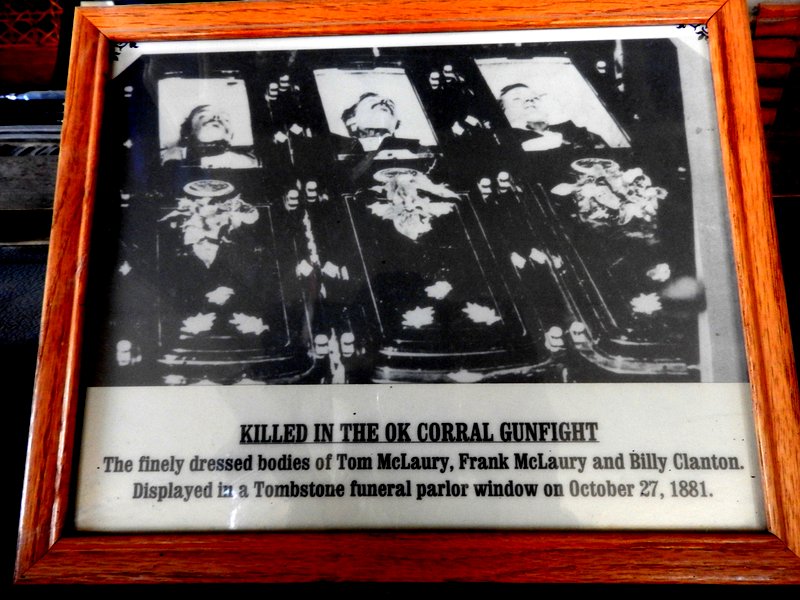 The coffins of the three dead men were displayed in the window of the funeral parlor. 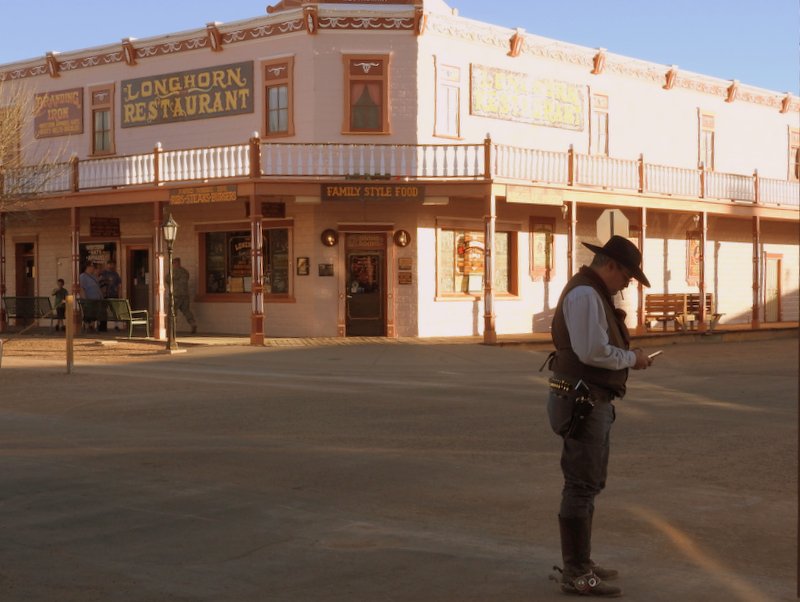 After the show, we went to lunch with Judy and David at the Longhorn Restaurant.

We had a wonderful lunch and interesting conversation with Judy and David.  They had to leave, but Judy suggested several places that we should see before we left.  There were a couple we didn’t make it to, and a place I wanted to see but didn’t get to, so we’ll have to go again sometime.

What we did do was poke around in some of the shops. 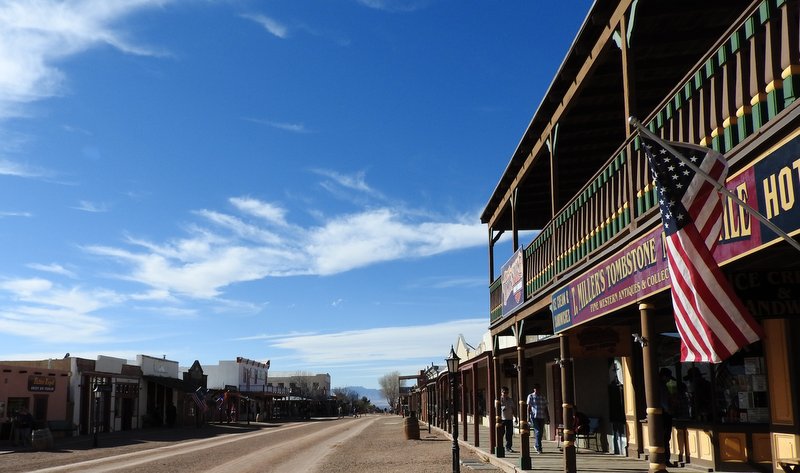 The main street in historic Tombstone 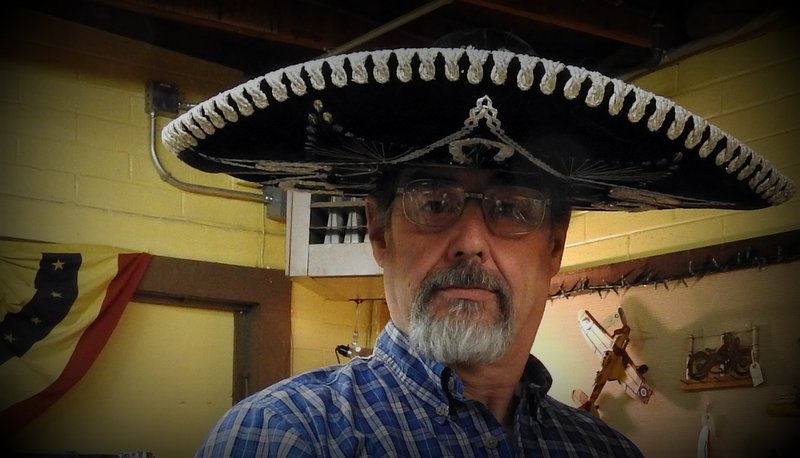 Mark, trying on a sombrero 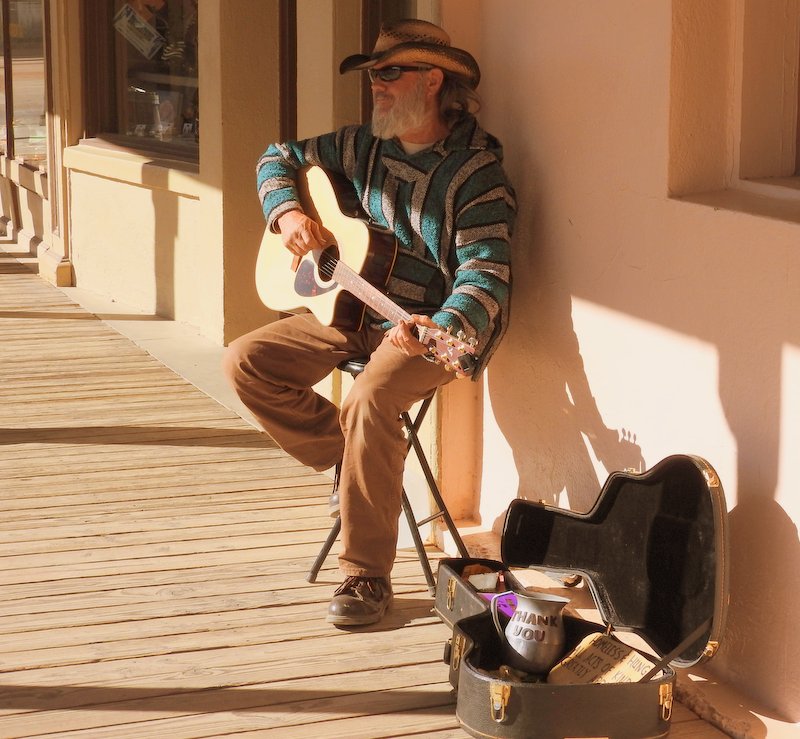 A musician on the boardwalk 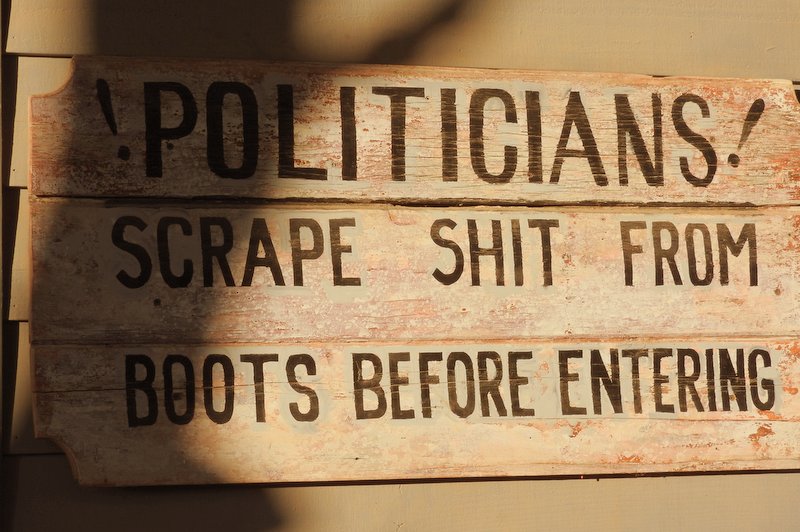 I wouldn’t put it quite this way, but I can sympathize with the sentiment! 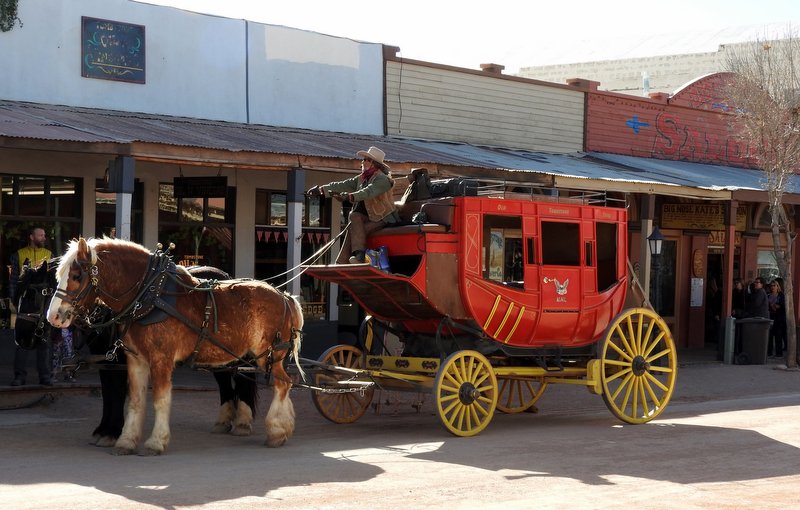 Stagecoach: it would have been possible to get a ride, but we didn’t. 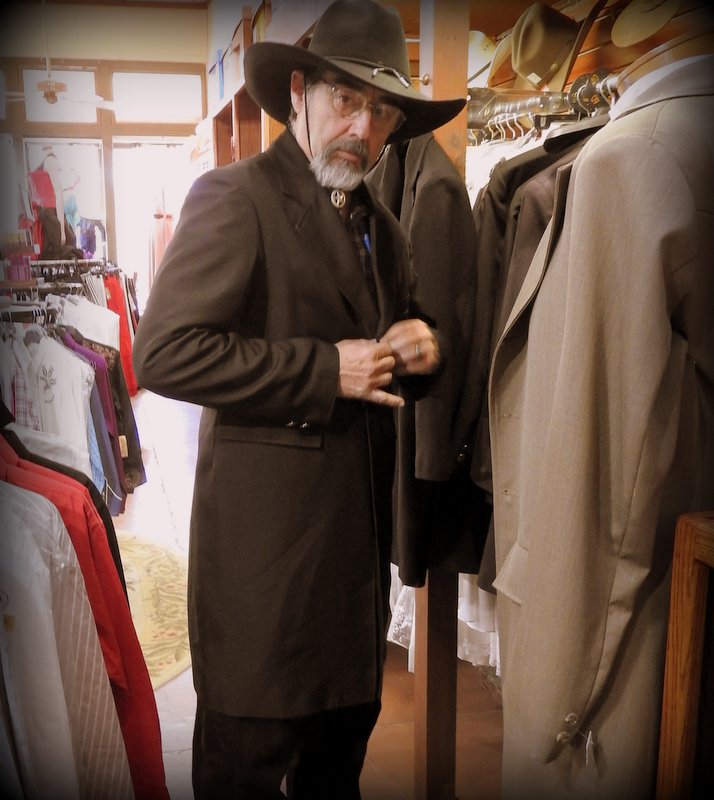 Mark trying on a frock coat

This was the reason we didn’t see all the things we wanted to see.  We got into this one western clothing store and Mark started trying on clothes.  He has been needing a new Sunday suit.  We got him this frock coat and a couple shirts and pants.  By the time we got out, most of the places were closed.

We did make it to The Tombstone Epitaph, the print shop where the newspaper was printed.  I took a few pictures there for my father. 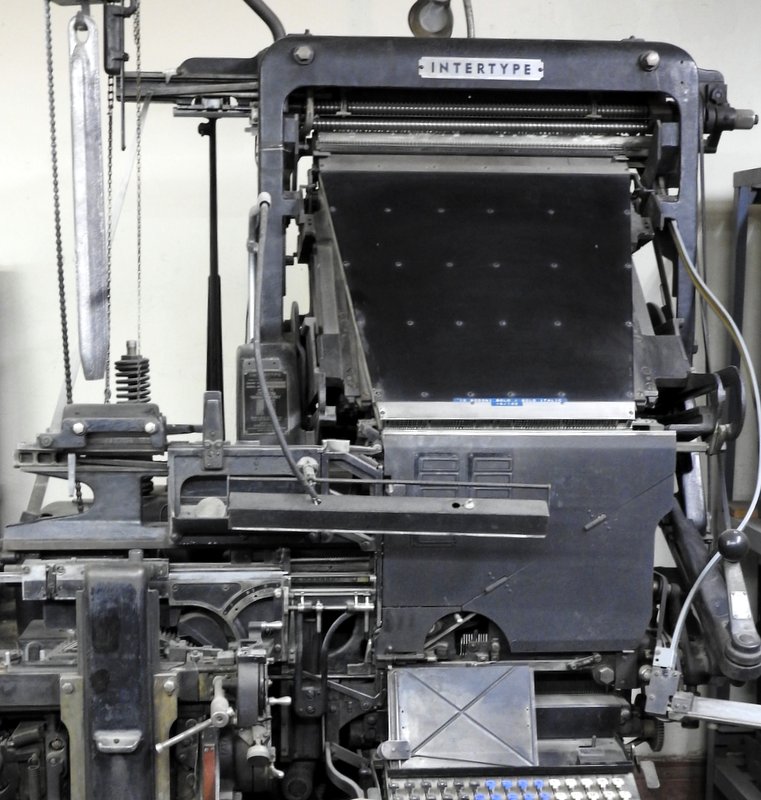 This reminds me of the old Linotype machine that was in my grandfather’s print shop when I was little. Someone would sit and type words and these metal keys would make a chigger sound as they went across to be placed on the printing plate. 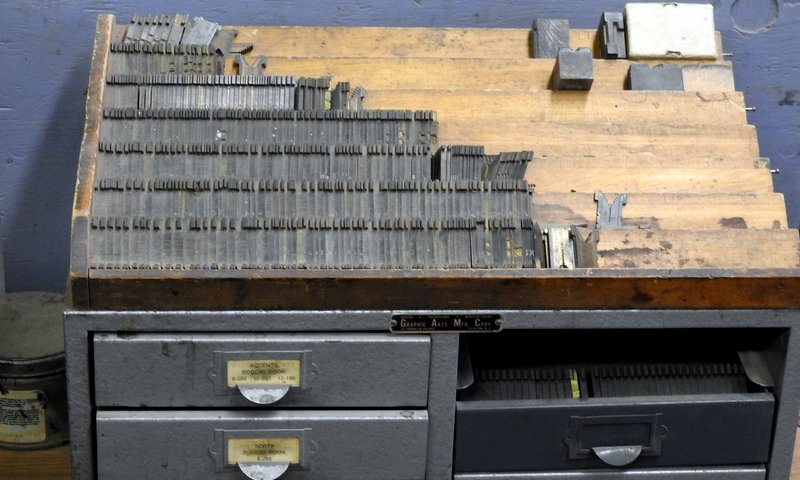 These were the metal keys with a letter on each. 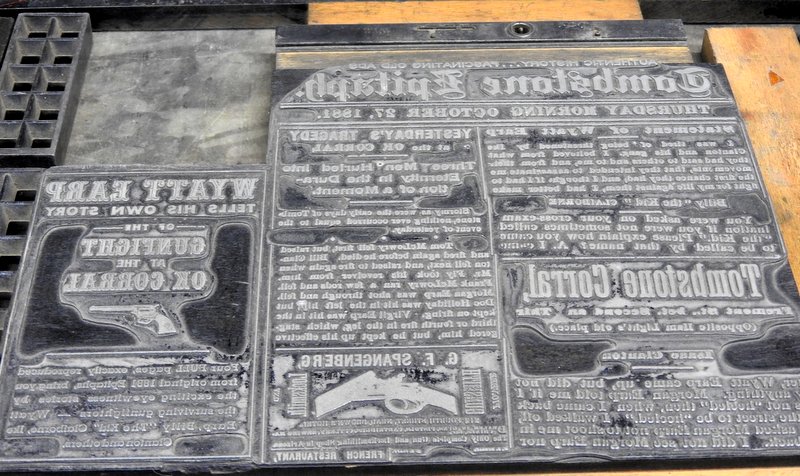 The type was all backward so that it would print forward on the paper. Some of you may not know that this is where the expression “Mind your p’s and q’s” came from. It was easy to get the two mixed up when they were backward.

And so, as the sun sank slowly in the west, we headed home. 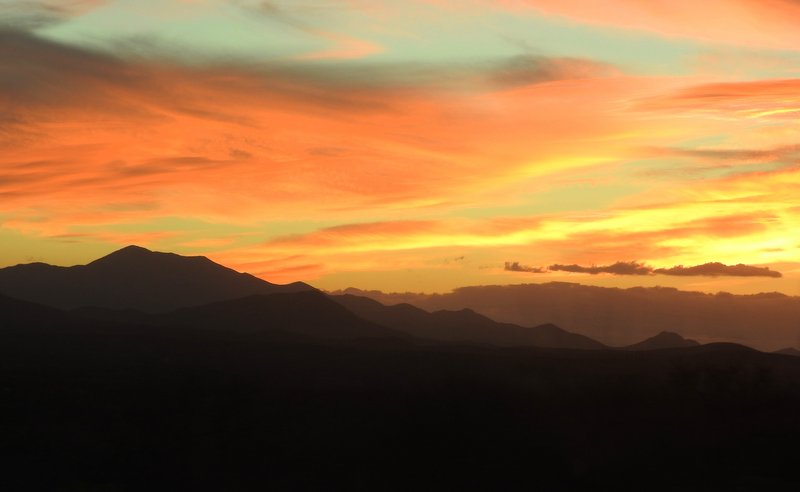 An Arizona sunset, almost as pretty as a Wisconsin sunset!