This morning as Mark and I were leaving our RV park to go to church, a whole family of Native Americans walked in front of us.  When they passed and we were driving down San Xavier (pronounced Ha-vee-AIR) Rd., we kept passing small groups of people walking toward the mission.  The mission is about two miles away from where we live.

After church, we decided it was time to visit the mission. 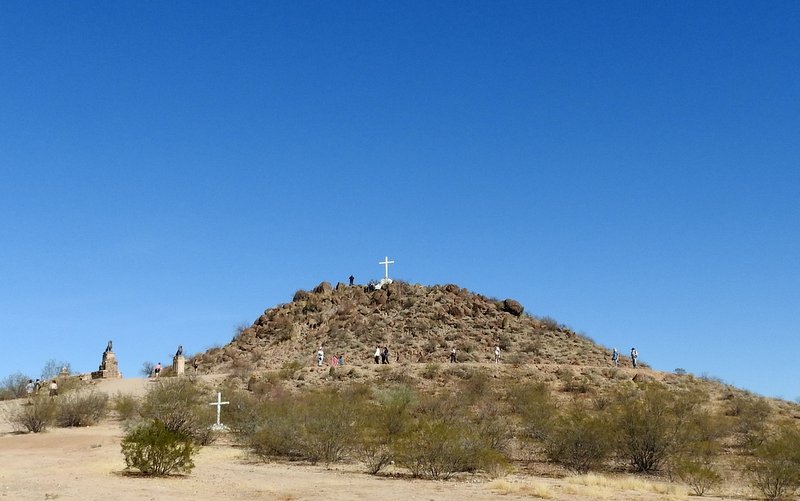 After parking, we first headed toward the hill beside the mission. 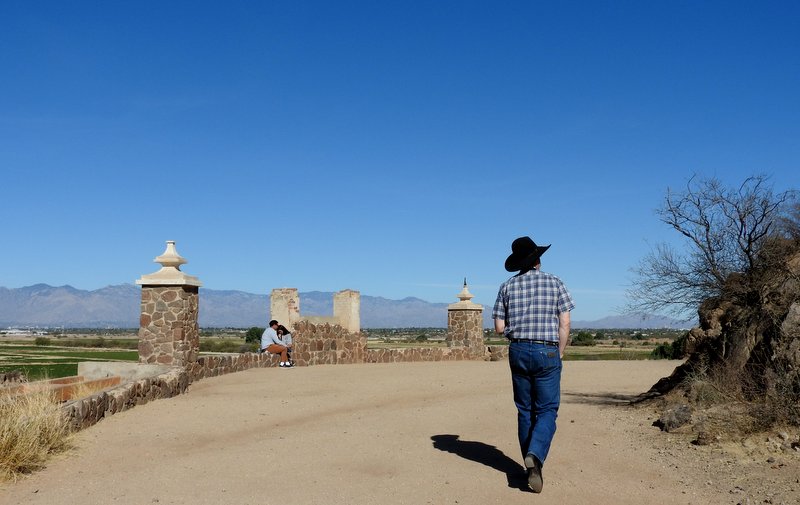 There’s a path that goes all around the hill about midway, but it doesn’t go to the top. 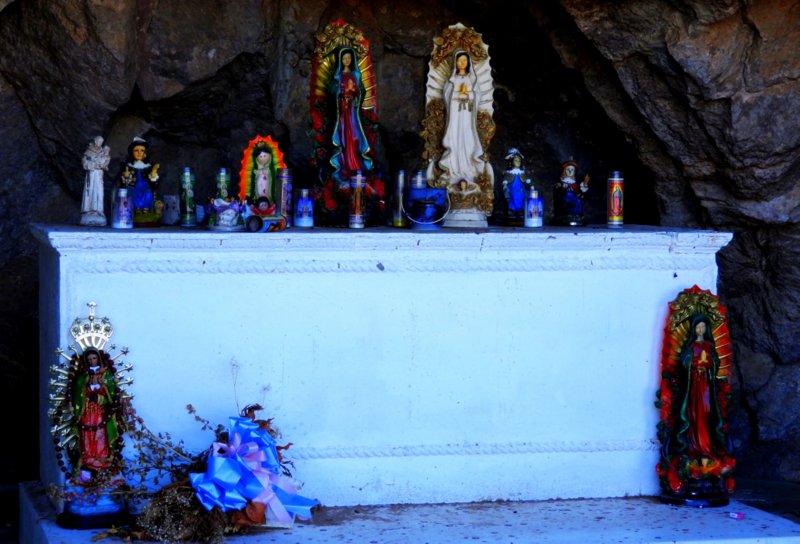 There was a cave shrine part way around the hill. 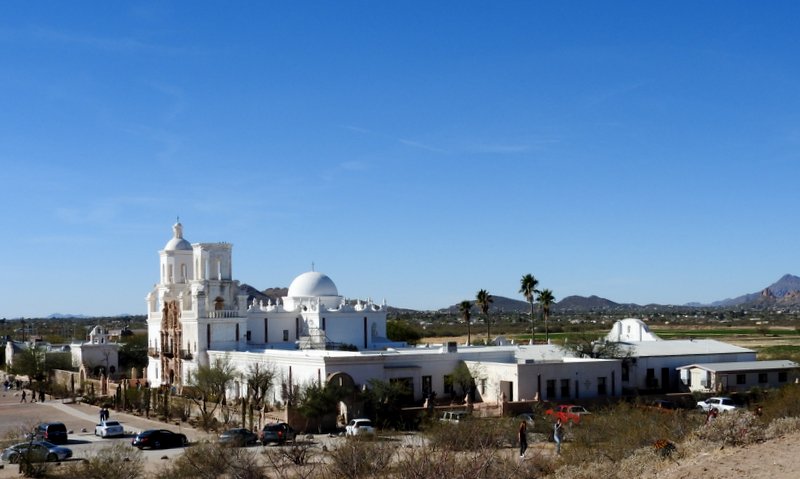 The mission as viewed from the hillside. 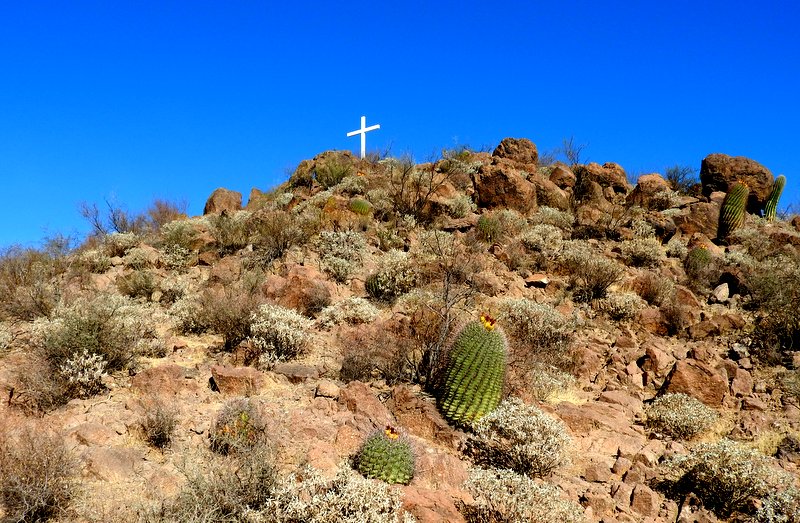 The only way to the top would have been to climb up. A number of people did, but not Mark and me. 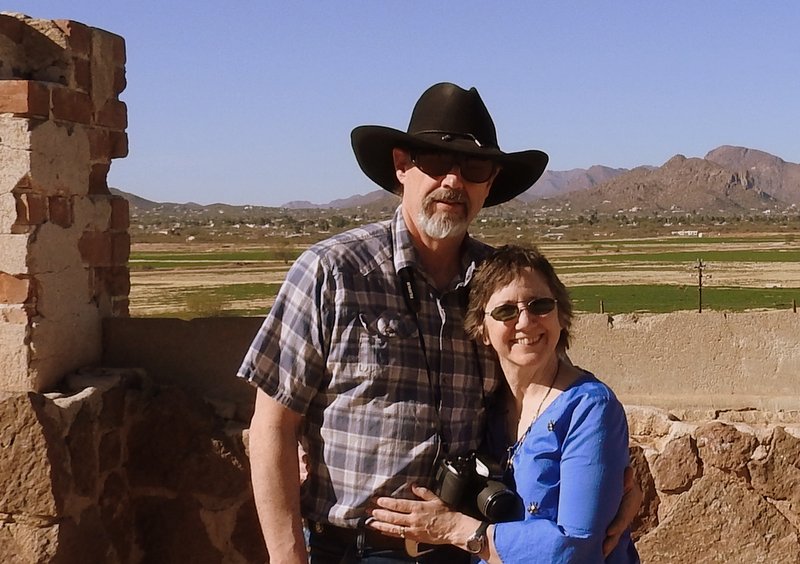 A nice couple offered to take our picture near the shrine. 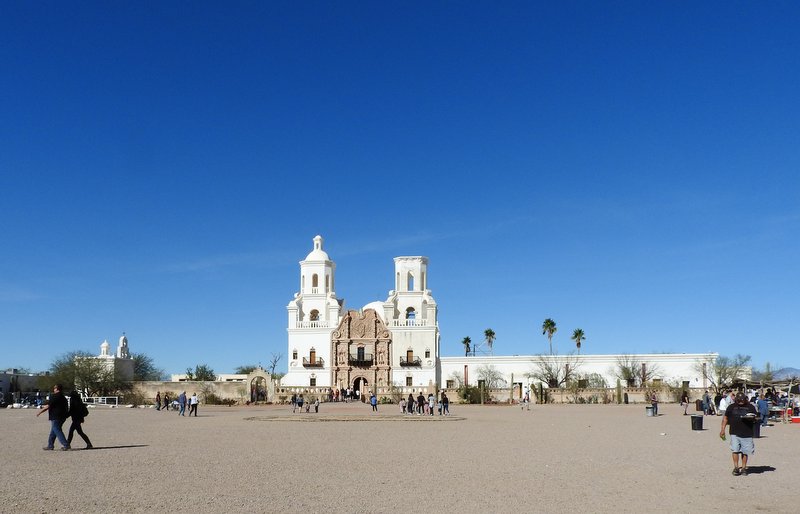 A mission was first founded here in 1692 by Father Eusebio Francisco Kino.  The current mission was begun in 1783.  Money was borrowed from a rancher to build the structure, but after fourteen years, the money ran out and the mission was left incomplete, as can be seen above in the tower on the right.  Mass is still held here for the Tohono O’odham people, those we saw walking here this morning. 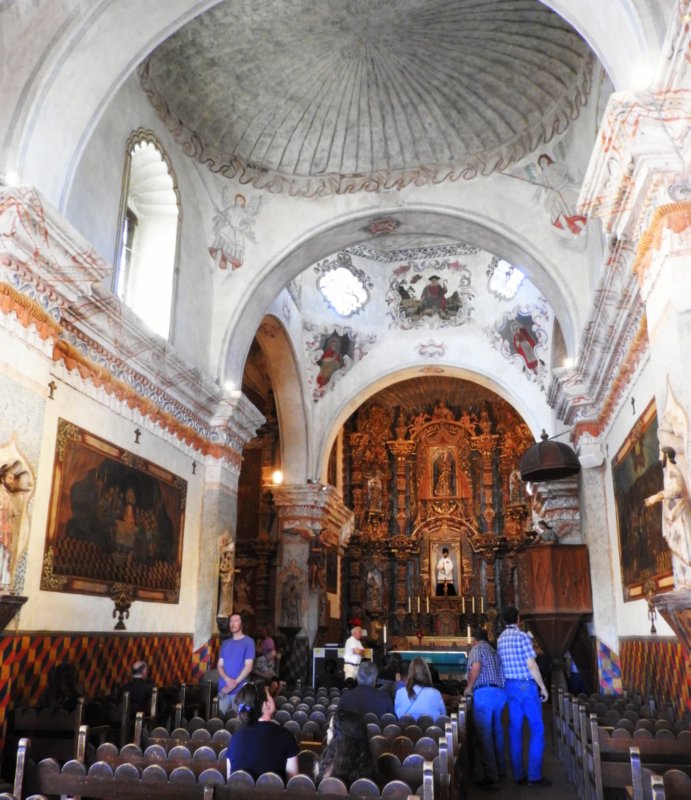 Inside the main sanctuary 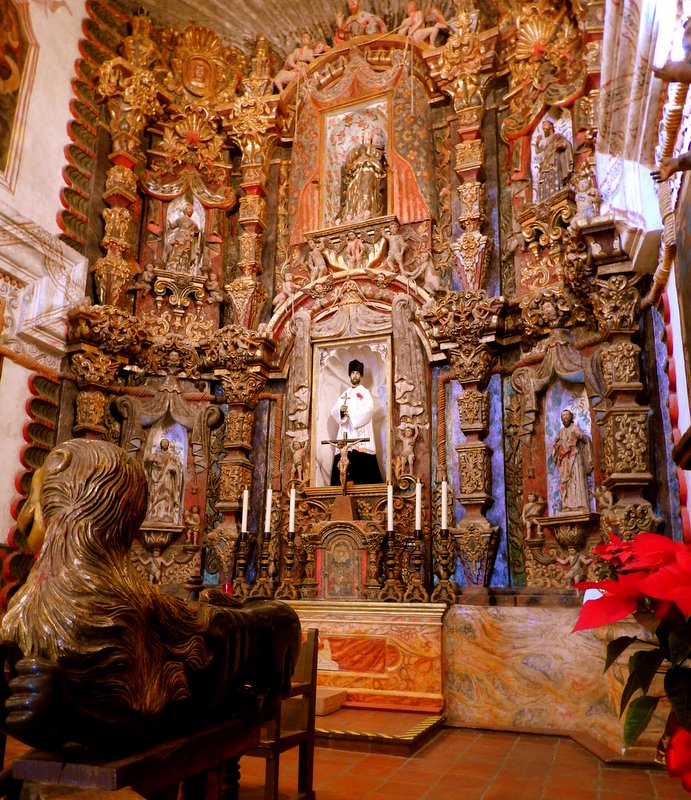 Ornate Mexican baroque at the front 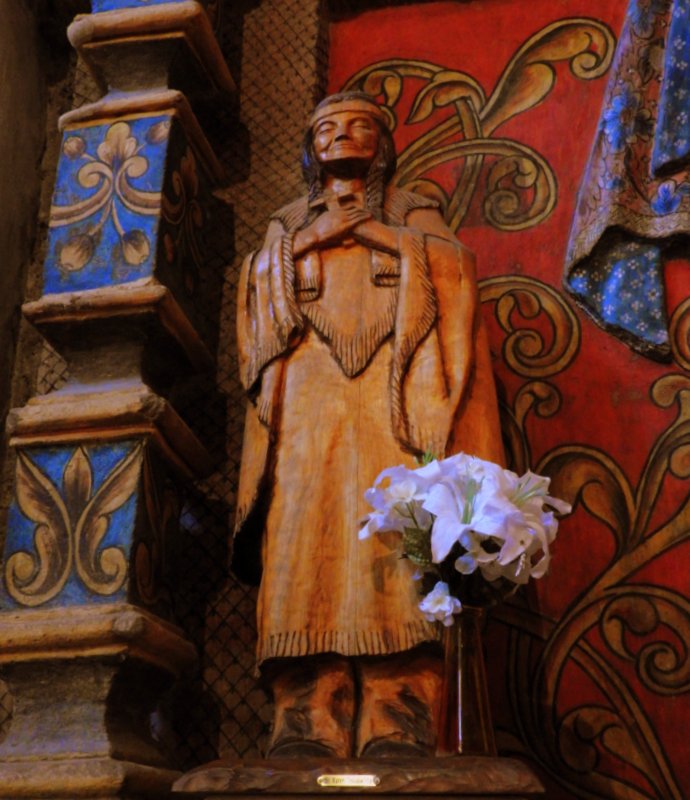 One of the statues in the east chapel 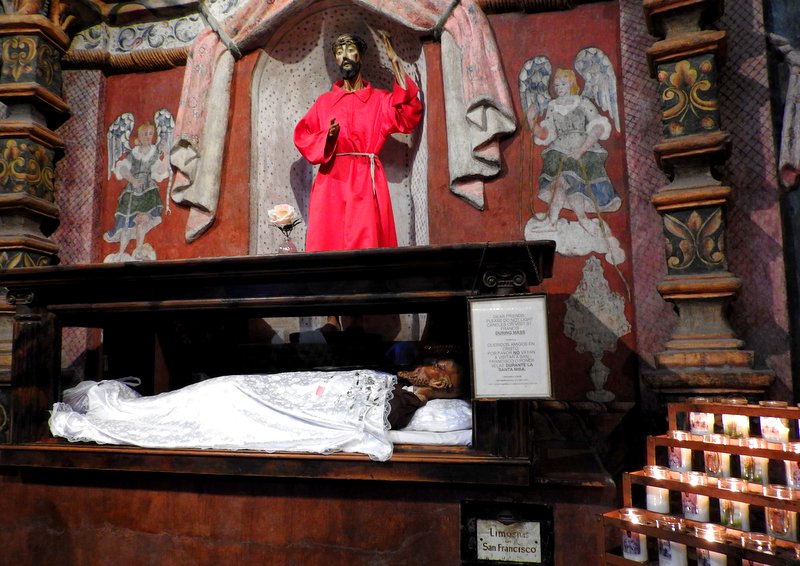 In the west chapel, there is a replica of St. Francis. The parishioners raise his head with their hand as they make their petitions. 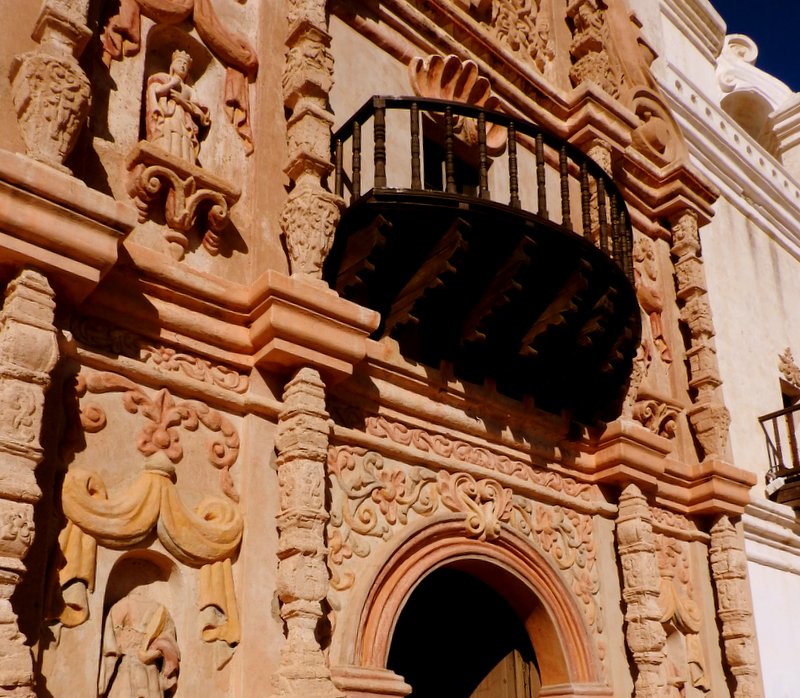 The edifice surrounding the main entrance 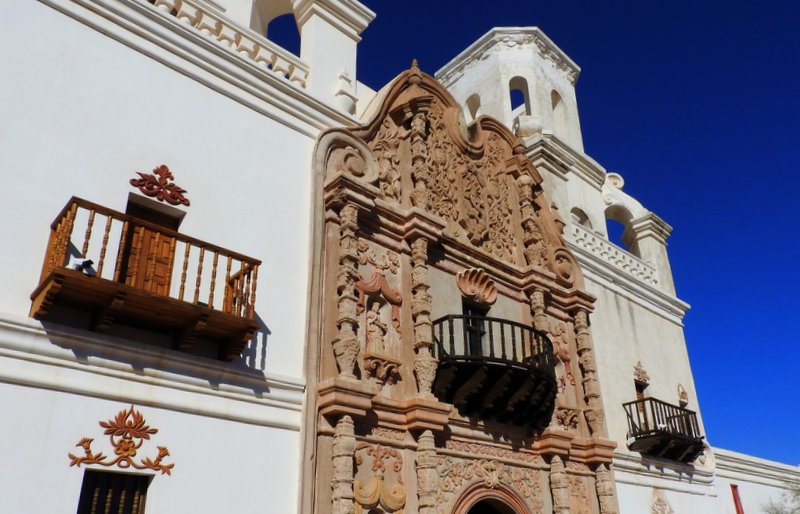 Note the difference in coloration between the west side and the east side.

In the above picture, you can see that the west tower is nicely finished while the east tower is discolored.  In 1978, a group of concerned citizens, called the Patronato, formed to raise money to have the mission repaired.  They brought conservators from all over the world to repair the damage done by water leaks, cement patches, and the soot from three hundred years-worth of candles.  Most of the detail work is finished.  The parishioners, themselves, are working to finish the restoration on the east tower. 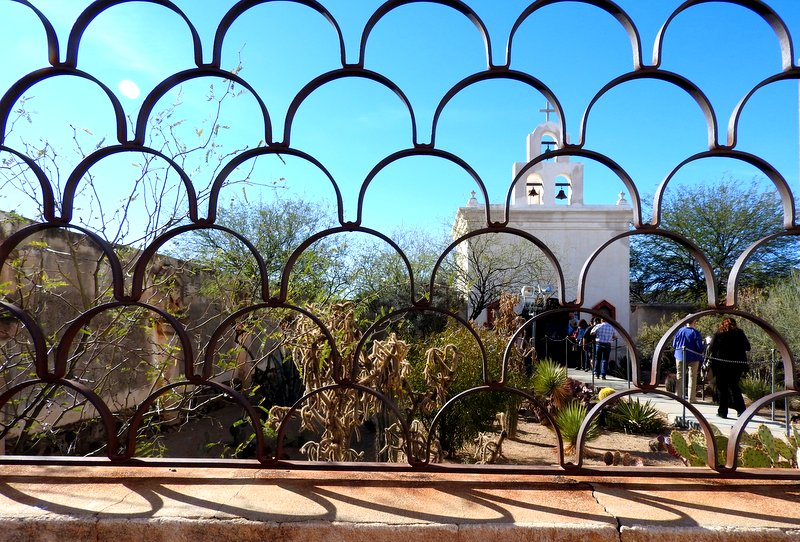 A small chapel on the west side of the mission 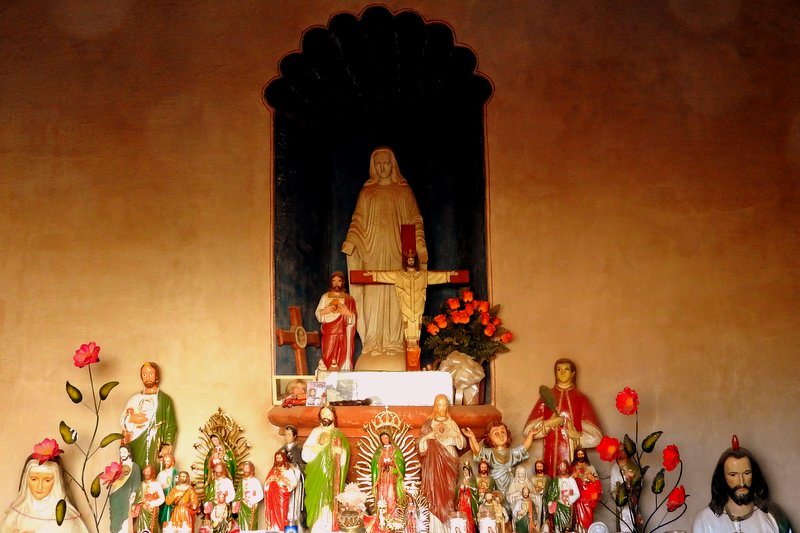 Inside the small chapel are many figurines of Mary and Jesus. 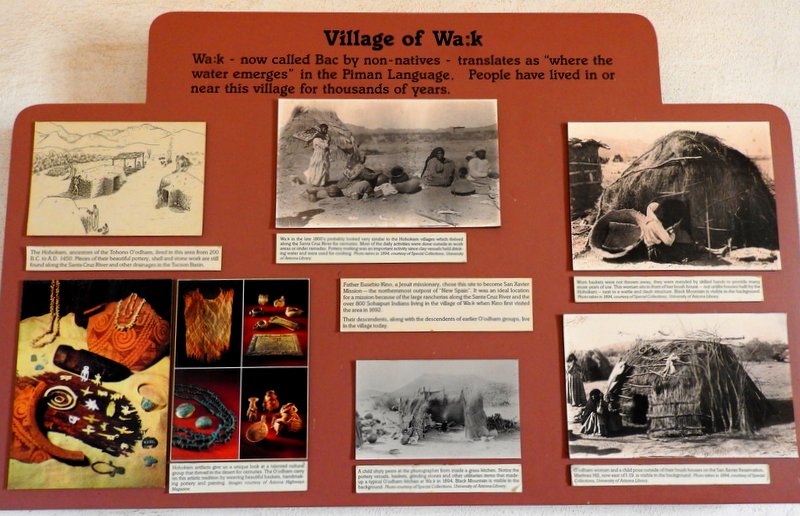 One of the displays in the museum on the grounds. I asked a woman how you pronounce Wa:k. She said that the colon indicates a kind of pause or drawing out of the “a”, like Waa-lk. 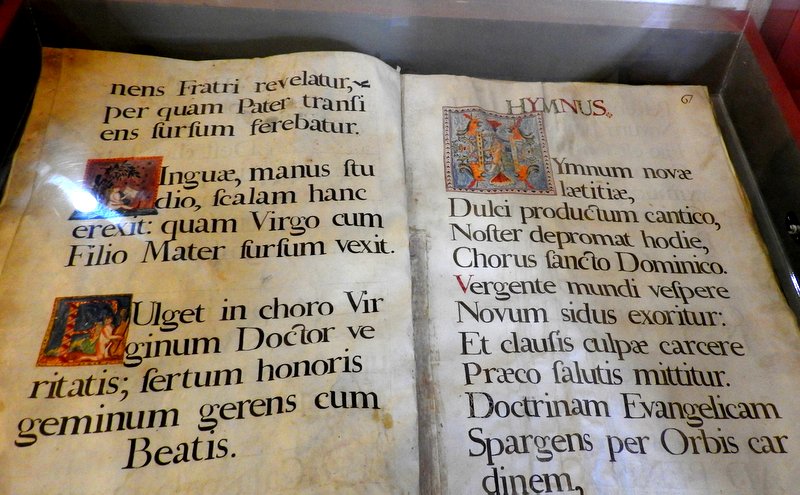 An illustrated prayer book, I think. 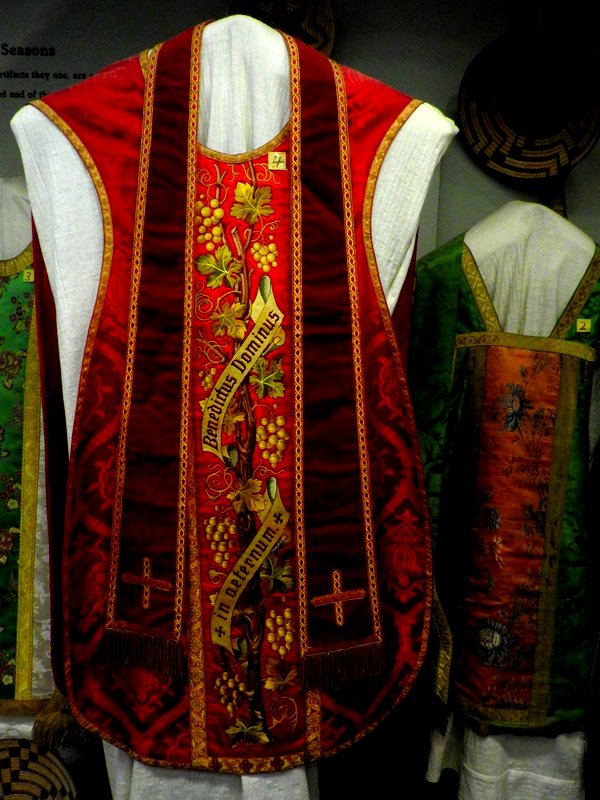 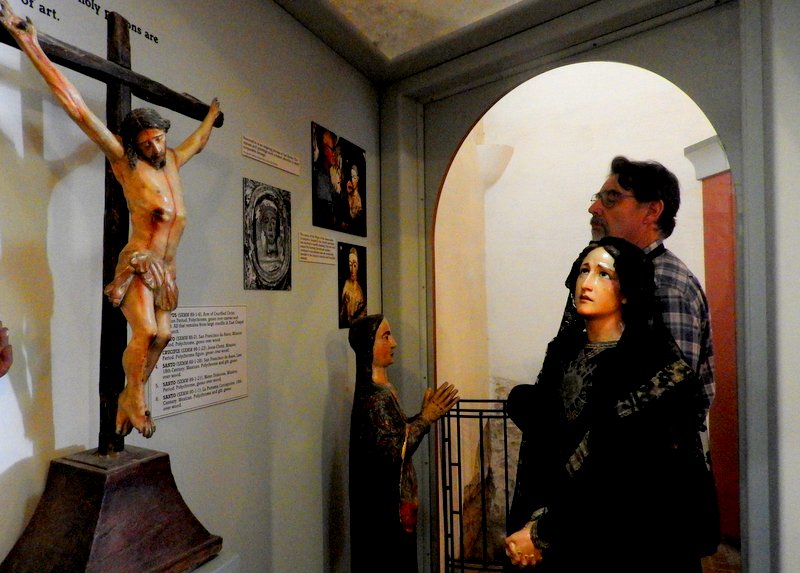 Mark appears to be part of the display! 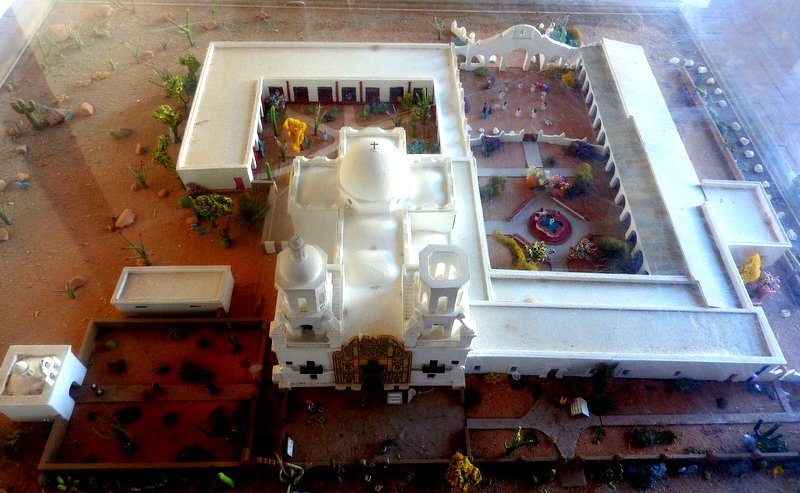 A replica of the mission 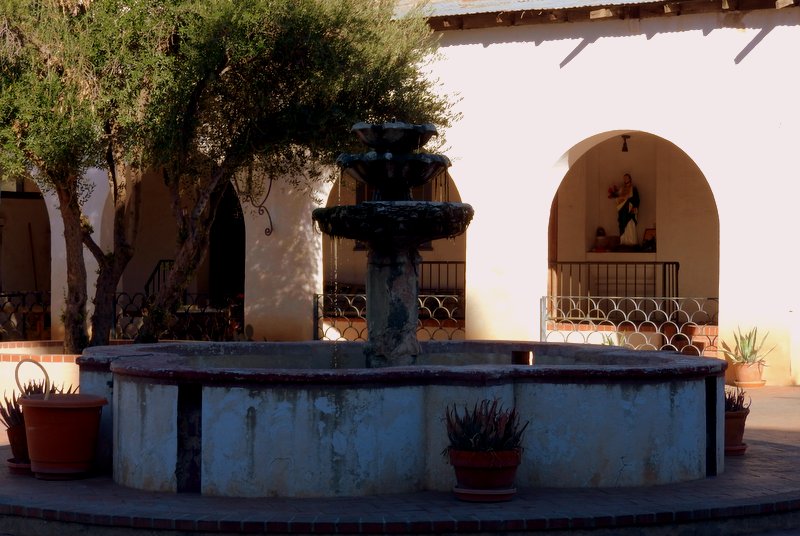 A fountain in the courtyard 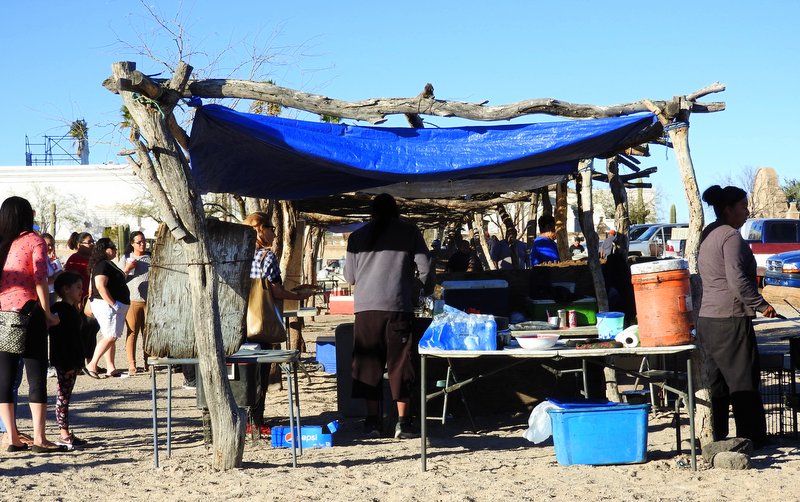 A series of booths

We had noticed when we came down off the hill and headed toward the mission that there was a smoky food aroma coming from these booths.  They were feeding people something that smelled very good.  If Mark and I hadn’t just had a large meal, it would have been tempting. 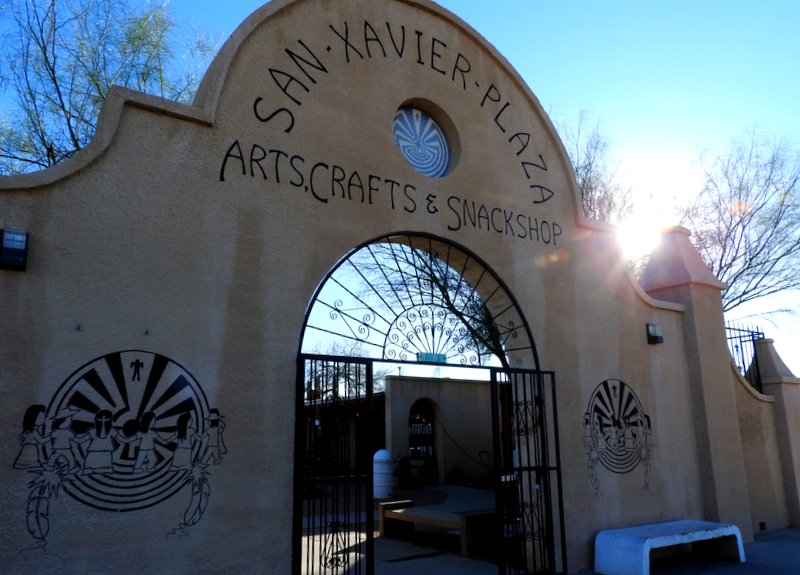 Across the way was a small plaza where native crafts and jewelry were sold. 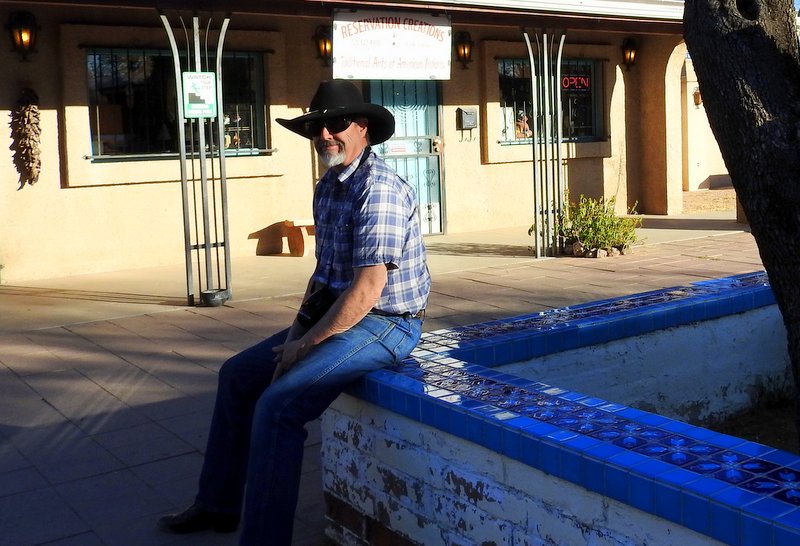 Couldn’t resist one last shot of Mark in the plaza! 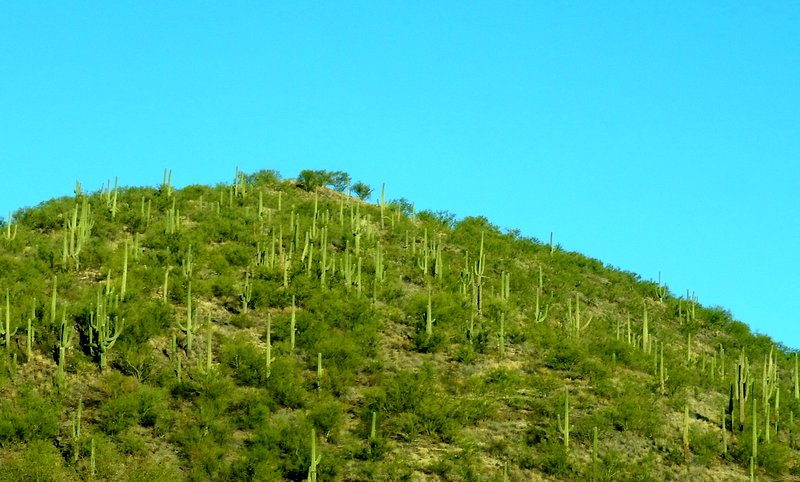 On the way back home, I finally got a good shot of the large hill between us and the mission. I find it interesting with all the saguaro growing on it.