I actually got up before Mark this morning and left him sleeping while I tried to attend an early morning walking session.  I got to Woodland Hall where we were supposed to meet, only to discover that it was called off due to a meeting in the building.  I decided to take my own walk around the park and see the end we haven’t gotten to yet.  (Did I mention there are 1500 sites here?)

I found the wood shop, the art studio, the lapidary shop, the stained glass shop, the archery center, the disc golf green, two tennis courts, one of the volleyball courts, a couple of dog runs, the car and RV wash, and a huge lake with signs warning not to feed the alligators and not to swim in the lake!  I also went into one of the bath houses and looked around the women’s side.  It had five showers and five toilet stalls.  At Wagon Trail Campground there were four of each on each side, so this isn’t that much bigger.  On the other hand, there are three bathhouses here and there were only two there.  Still, it looks doable.

When I got back to our place, Mark was up and the front door was open with the screen door shut.  Mark helped me get my sewing stuff together and set my sewing machine roller bag on the ground for me and I walked over to the pine room where a day of sewing was scheduled.  Everyone was working on their own projects.  One woman brought an embroidery machine.  Once it was programmed, she could get up and wander around the room while it worked if she wanted to!  There were a couple women working on charitable projects, several women working on Christmas projects, and others working on projects they had started and never finished (UFOs – UnFinished Objects).  I worked from 9:00 in the morning until 3:00 in the afternoon on a Christmas gift for my nephew.  One of the women was able to give me some advice on a part I was having difficulty figuring out how to do.  It was fun to spend the day with women! 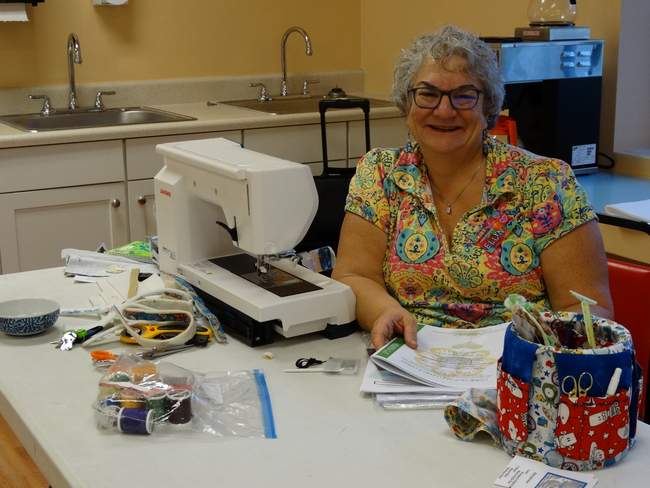 I forgot to take my camera with me during the working part of the day, but when I finished I went home and got my camera and by the time I got back, this was the only woman still there.

When I came home, Mark told me that a woman named Susan had called and asked if we could come into the office to finish filling out our paperwork.  Basically, she needed a photocopy of our passports.  Mark left me there for a few minutes and she showed me how to get into the restaurant kitchen to get pop or water or Gatorade whenever we’re thirsty while we’re working.  They want us to stay hydrated.  Susan isn’t going to be our boss, though, so she still couldn’t tell us when we’re going to be scheduled.  For that, hopefully, we’ll be called in to meet Marybeth tomorrow.  She has been in a meeting for the last three days, but tomorrow she’ll be in the office.

Mark and I went off the grounds to get some dinner and go grocery shopping.  We can finally get real food to cook again!  (We’ve only been doing zappable dinners while we were traveling.)  We are getting to know Fruitville Rd and Cattlemen’s Rd pretty well already.  Cattlemen’s Rd is all decorated for Christmas. 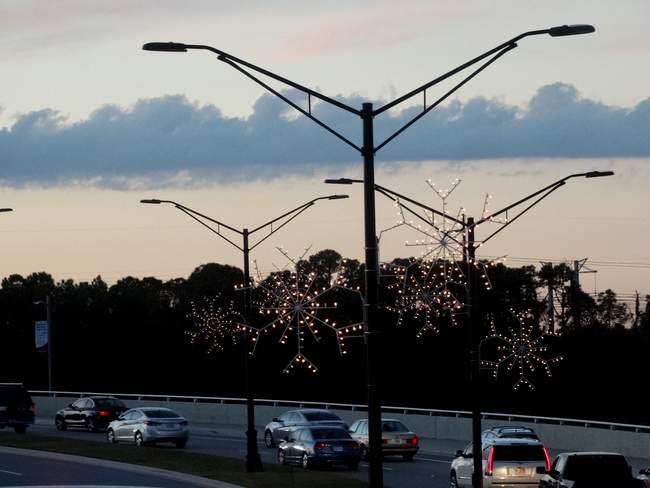 This was a moving display that looked like the rowers were rowing. 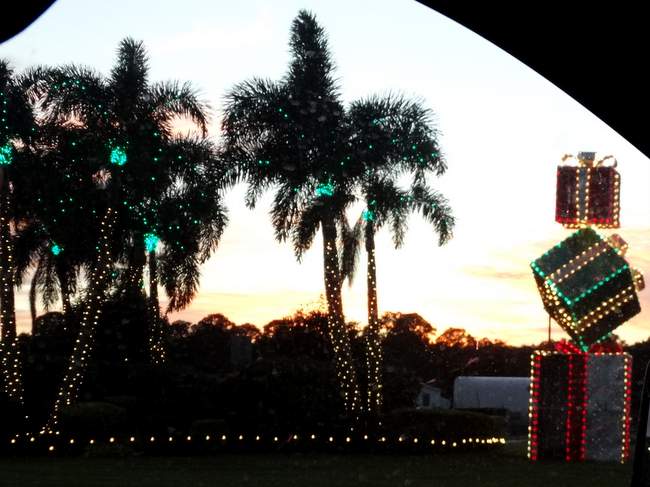 We brought the groceries home and I stocked our freezer and fridge while Mark went down to check out the billiards room.  There was supposed to be a men’s billiards tournament there this evening, but he came back early and said there wasn’t much going on.  We got our swimsuits on and walked down to the hot tubs.  There are two: One is set to 106° and the other is at 98°.  We tried them both and it felt so good!  A person could get used to this.