When I chose Edisto Island to spend several days at, it was because of its proximity to two other locations.  We are half way between Charleston and Hilton Head, SC.  Today we headed north to explore Charleston.  I had heard that there is a historic section of town, but I didn’t know much about it.

The first thing we did was stop in at the Charleston Visitors Center.  They had a list of all different kinds of tours one could take of the city.  Mark had wanted to see Fort Sumter, but that tour was going to leave before we could get to the location.  We settled for a horse-drawn carriage ride.  I was, unfortunately, sandwiched in the middle of the carriage so it was difficult getting pictures around the people on all sides of me. 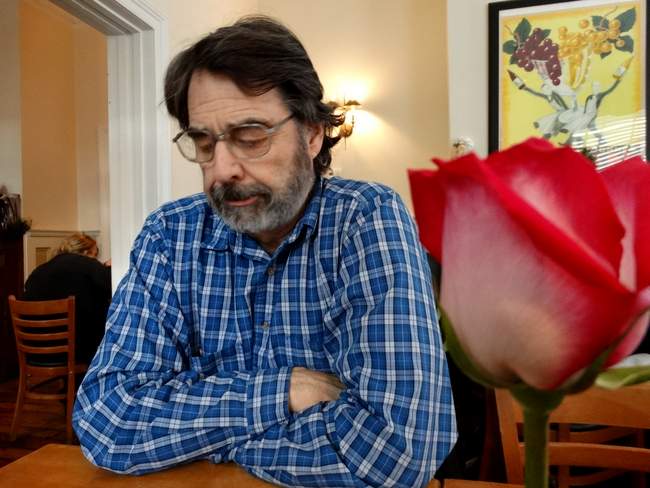 First we stopped for something to eat. (A rose for my love!)

The barn where we were to catch our carriage ride was right across the street from where we ate. 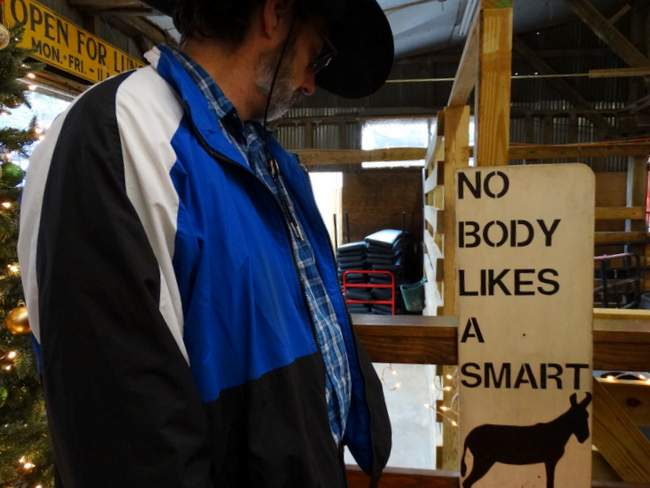 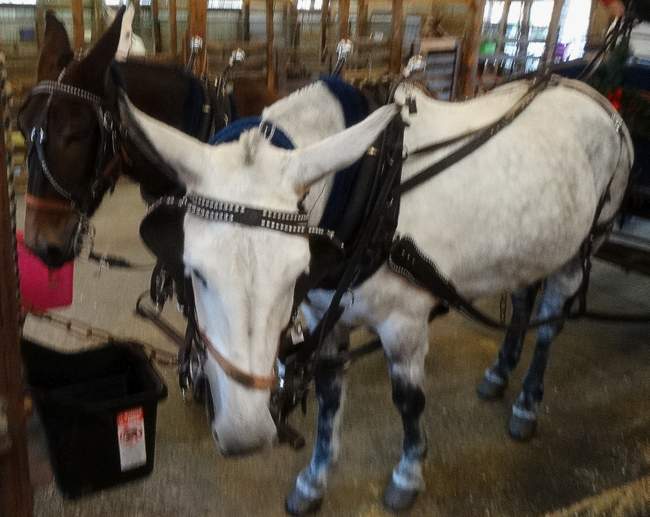 Our carriage was actually mule-drawn. These are Rhyme and Reason. 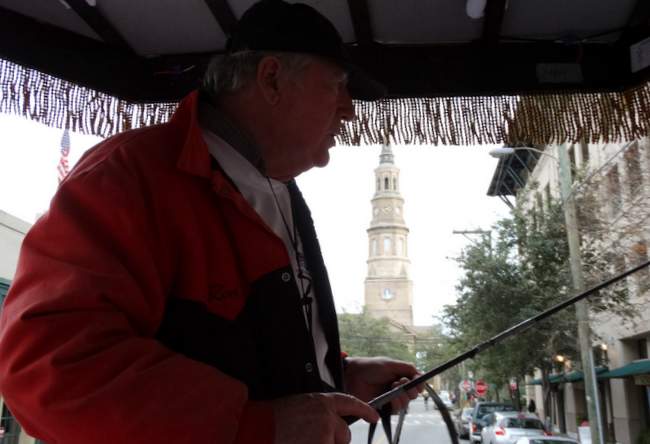 This was our tour guide. 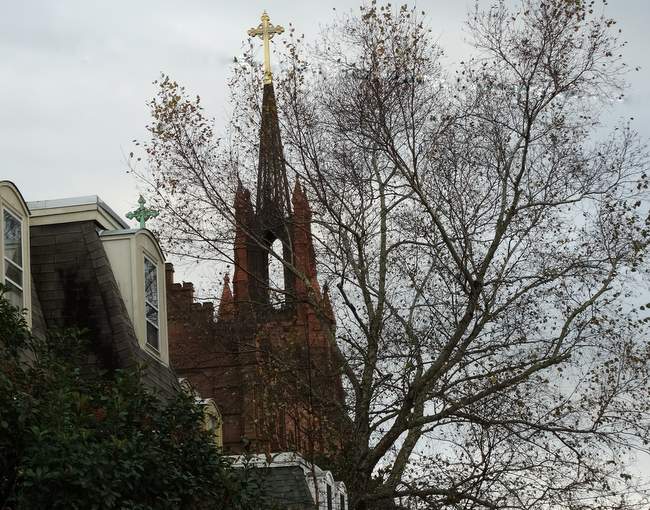 One thing Charleston has is a lot of really tall steeples. 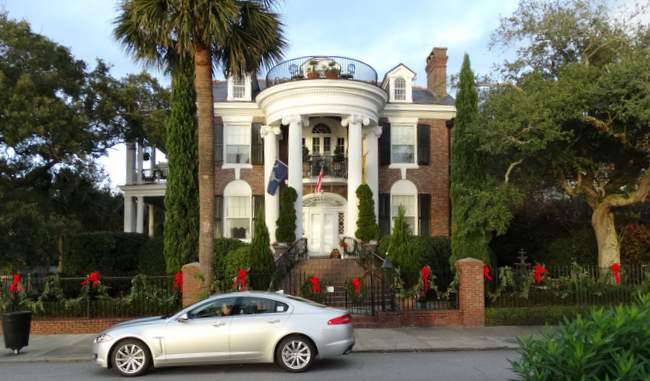 The carriage ride took us around a lot of expensive homes. 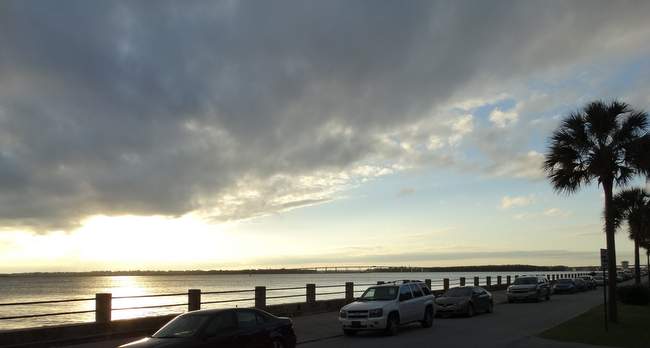 We went as far as the waterfront. The guide said this seawall was put in first, then the land behind it was filled in. I guess this used to be a swamp, and it is still prone to occasional flooding. 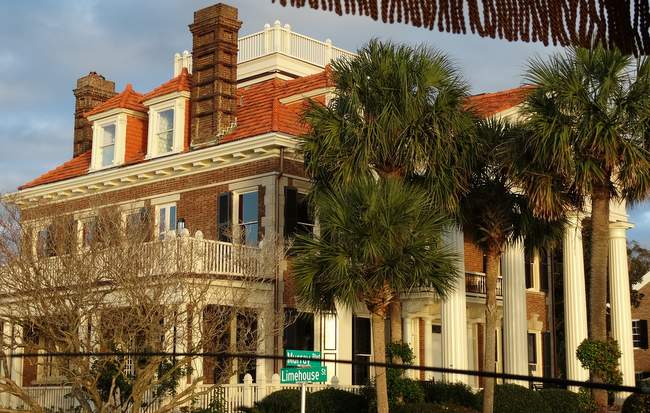 I think the guide said this was the first house built behind the seawall. 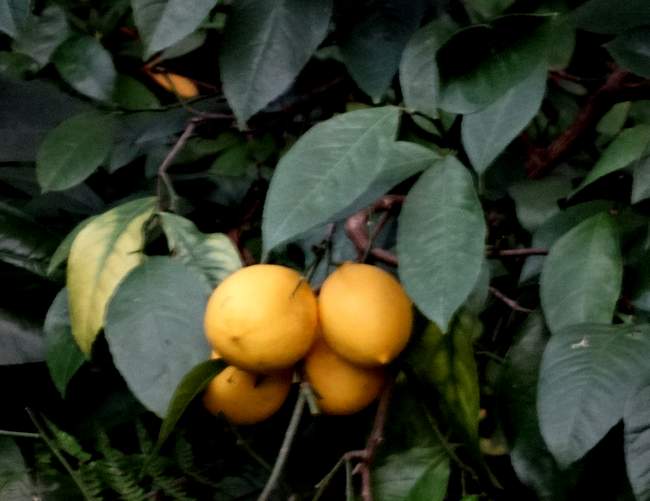 These are lemons growing in somebody’s back yard! 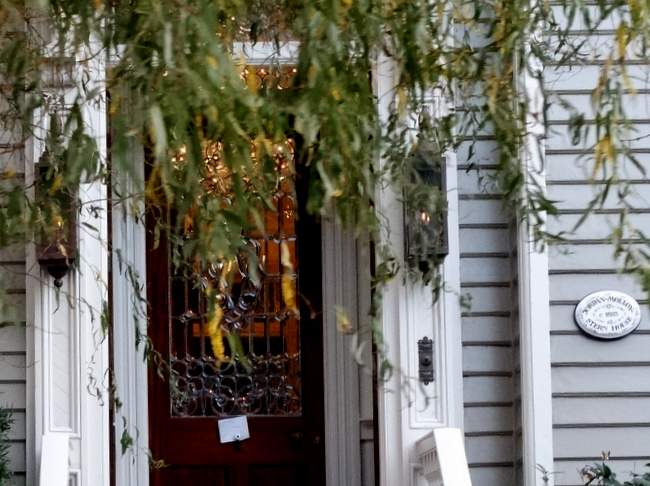 I loved this leaded glass door! 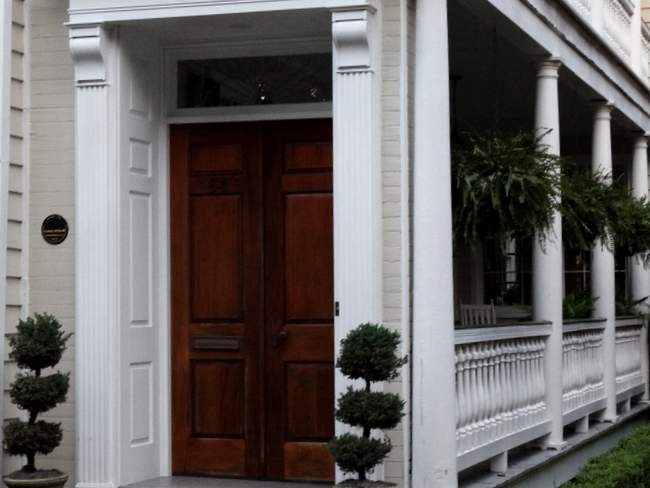 The guide pointed out several of these porches that had doors in front of them. I guess it was to keep strangers from going on the porch or something. 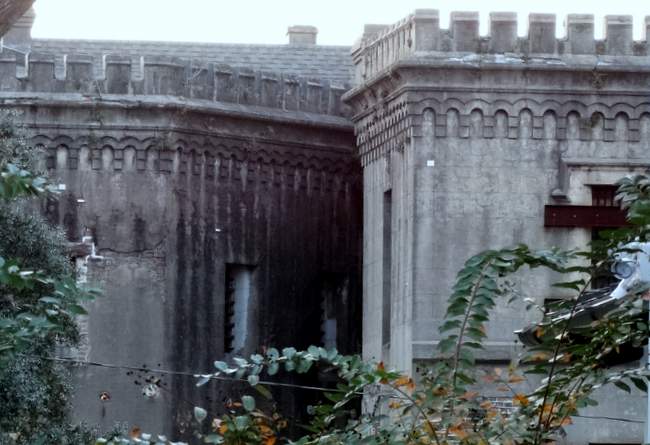 We got a mere glimpse of the old jail behind some houses. The guide said that a number of pirates were jailed here before they were hung. There was a judge who hung forty nine pirates in one month, so for a while pirates stopped coming to Charleston. Eventually they came back. 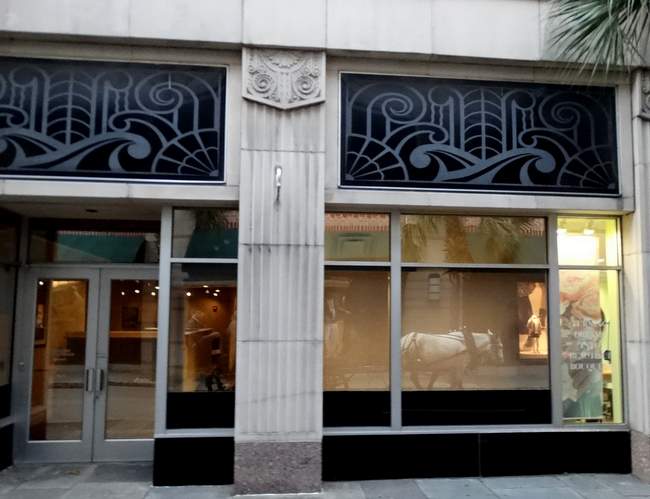 Much of the tour the guide was talking about the various styles of architecture. Most of that went over my head, but I do remember him saying this is art deco. 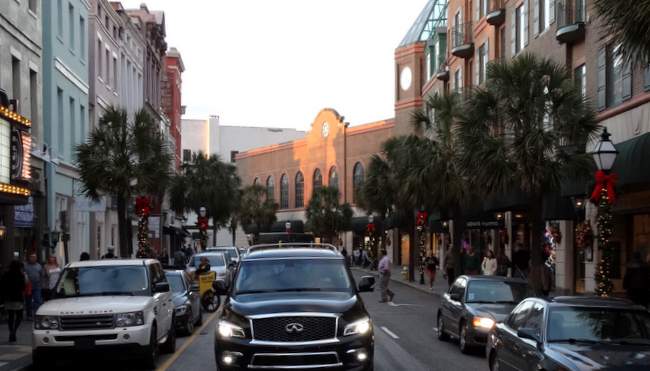 Looking down one of the streets in the business district of historic Charleston. 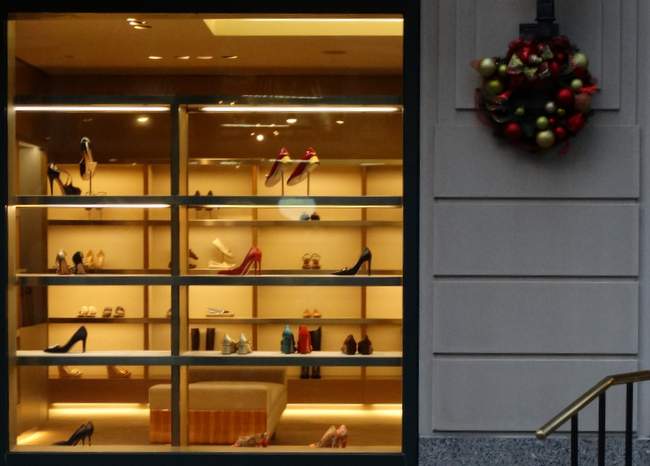 Then I started looking through some of the shop windows. This was Gucci. 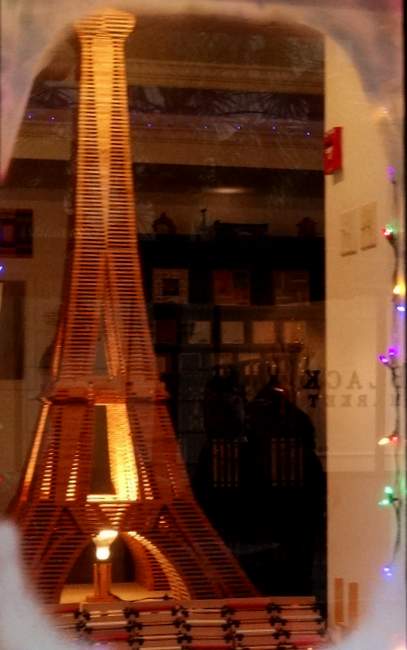 I liked this stick replica of the Eiffel Tower. 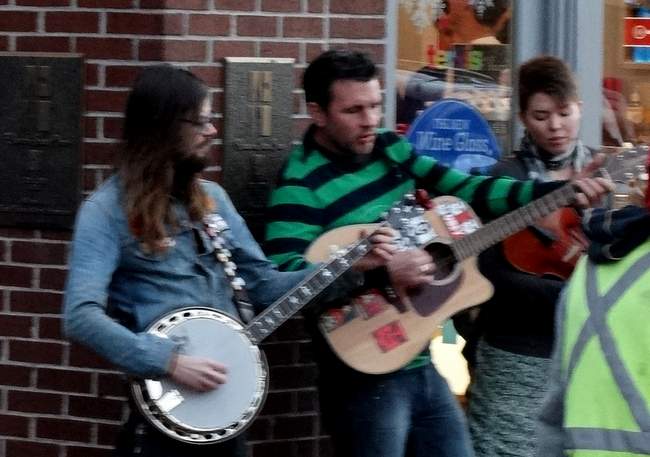 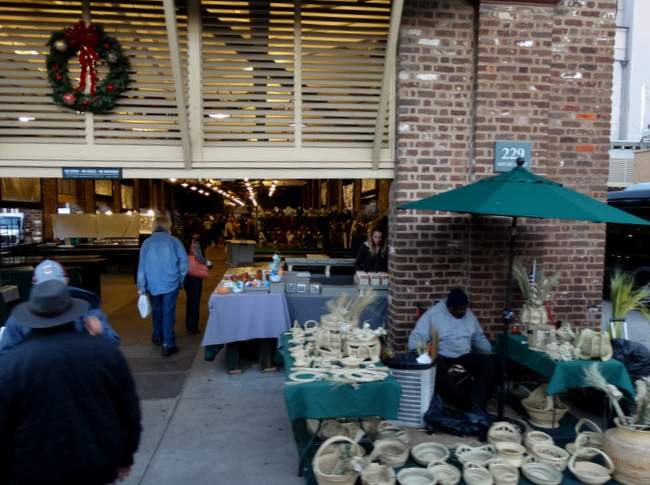 This is kind of like an indoor farmer’s market.

When the tour was over we headed back to our place.  Leaving Charleston we crossed a kind of pretty bridge: 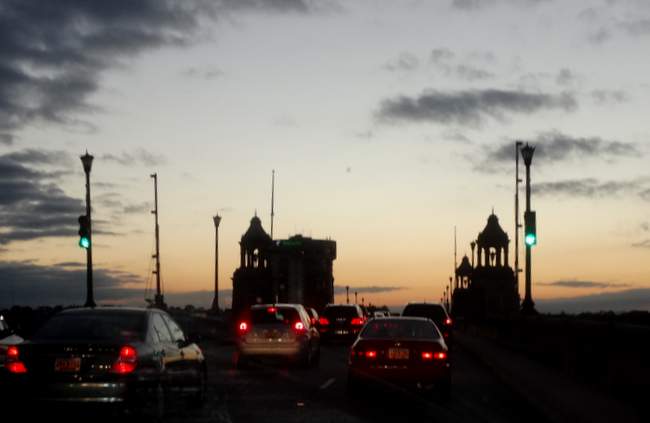 This reminded me of the song that says, “…even streetlights blink a bright red and green.”

When we got back to the entrance to our park, I asked Mark to drive up just past it where I had seen a display this morning that I knew would be lit tonight:

A nativity…But just like folks who only bring out a few pieces each week of Advent, only some of the pieces are currently lit.