Today we had an extra long day of driving, especially since we crossed over into Eastern Time.  I don’t believe we’ll be back in Central Time till our return trip to Wisconsin.  For those of you in the Pacific NW, if you want to call us, remember that we are now three hours ahead of you.

I have to admit to having had a prejudice against Kentucky before we drove through it.  In 2013, we worked with a couple from Kentucky who seemed so backwards that I half expected Kentucky itself to be kind of a backwards state.  I enjoyed Paducah, but I didn’t think the rest of the state would be anything to see.  I was pleasantly surprised today to find that there were many things I would have liked to stop and see, but because I knew we would be getting in late tonight at our next campground I didn’t ask to stop.  Still, Kentucky may warrant another visit someday. 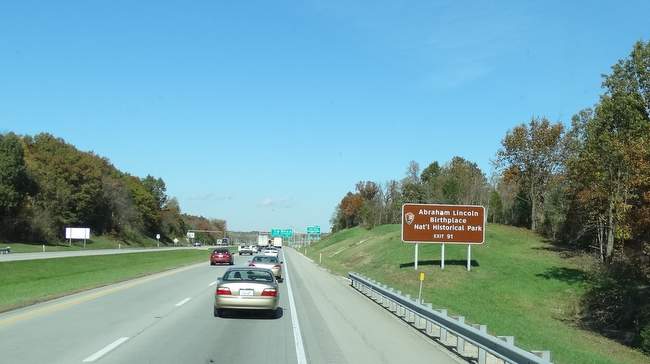 I’m not as good at history as I should be. I had always thought that Abraham Lincoln was from Illinois. Maybe that was just where his career was before he became president. Anyway, I would have liked to see where he was born and his boyhood home. 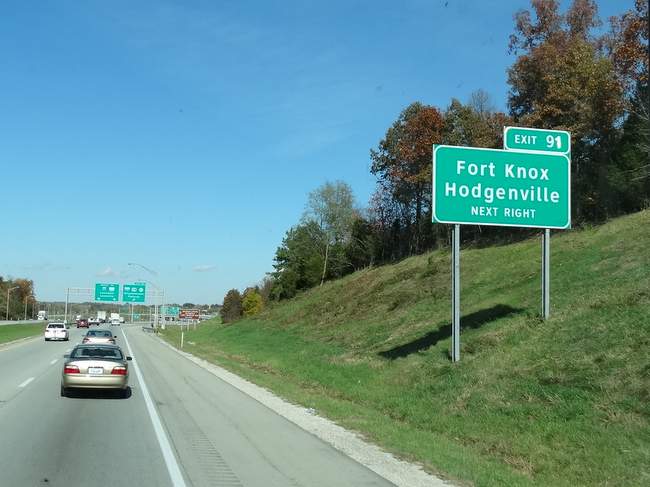 Whoa! Fort Knox? It was a surprise to me that the US bullion depository is in Kentucky. 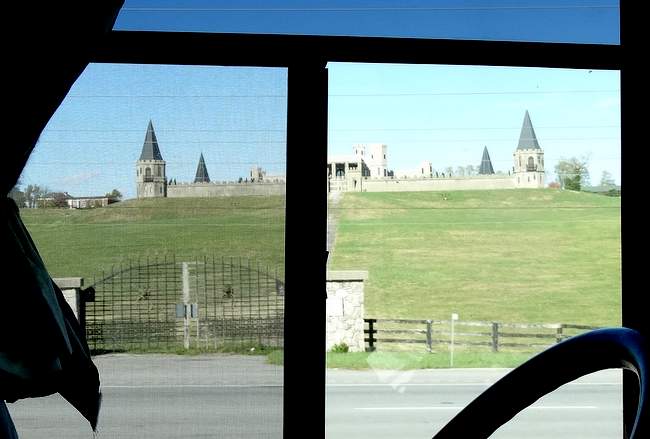 Not quite sure what this was, but it looked intriguing.

I should have realized that the Kentucky Downs were in Kentucky, but I never thought I would actually get to see it. 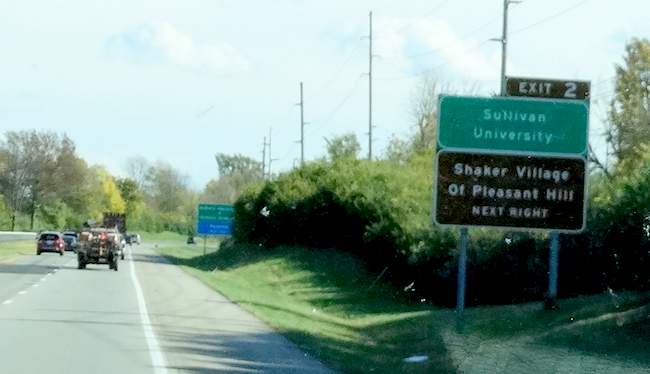 Somehow it hadn’t occurred to me that the Shakers were in Kentucky. I remember the first time I ever heard of Shakers was when my older sister, Sherill, took an interior design class in college. She had to do a report on a furniture style and she chose the Shakers. For those of you who may not be aware of who the Shakers were, it was a religious society that didn’t believe in marriage so even in the 70’s when Sherill took the class I think there were only three Shakers still remaining. They must all be dead by now. At any rate, they were the ones who wrote the song, Simple Gifts. Their homes were simple and efficient. They had a rail on the wall with pegs and they could hang their chairs on the hooks till needed, making it easier to keep the floors clean.  I could use something like that! 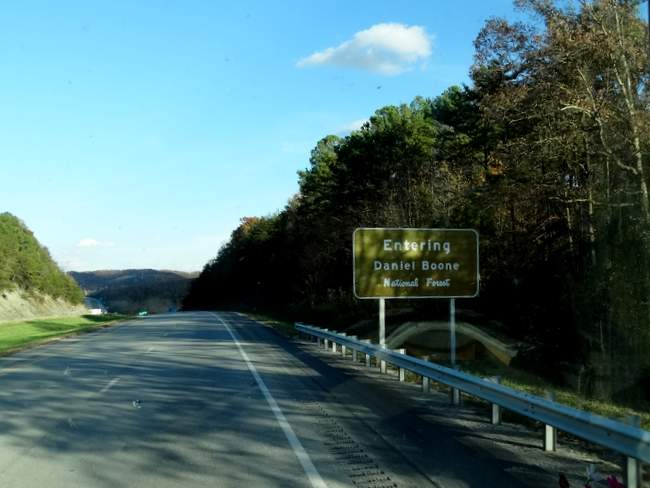 I had also somehow forgotten that Daniel Boone was from Kentucky. 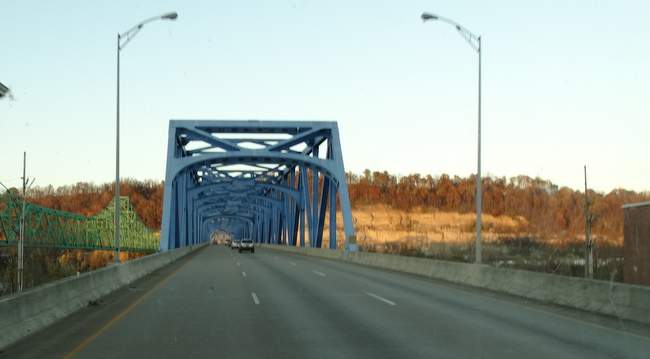 This bridge marked our departure from Kentucky. 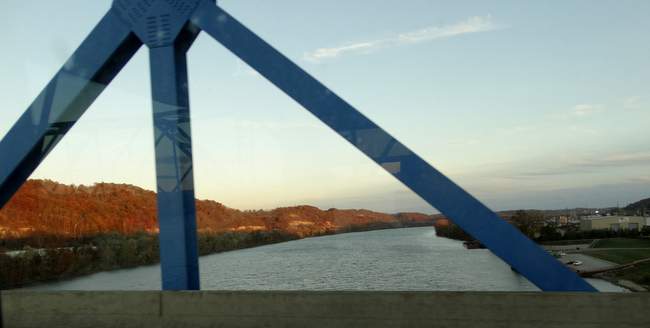 On the other side of this river, (to the left of the picture), we entered Ohio. It was nearly sundown as we crossed the border.

By the time, we entered Ohio we still had about an hour of driving left to get to our campground for the night.  All day we had been traveling on good roads till we got into Ohio.  Then the roads became narrow, windy, and steep.  Not only was it dark because of the sun going down, but there were no street lights.  As dusk fell, we went through a town where the local church was having a Trunk or Treat and there were costumed people walking along the narrow streets.

We were aiming to spend the night at the Bob Evans Farm in their campground.  The Bob Evans Farm was well lit and there were a Bob Evans restaurant and a number of other buildings, but that wasn’t where the campground was.  Our GPS wanted to direct us to someplace down the road, but prior to reaching that point we saw a very small sign that said, “Bob Evans Campground”.  We still weren’t sure when we pulled in that we were in the right place.  There was no office for registering and there were hardly any RV’s here.  I finally went and knocked on the door of one of the RV’s and said, “We’re looking for the Bob Evans Campground.”  The man said, “This is it.”  He told us we could just pull into any space and go over to the office in the morning to pay.  We were relieved to be able to set up camp and have dinner.

Today is the day Mom and Cal went to talk with the doctor about setting up his radiation treatments.  Here is what Mom wrote about their visit:

This morning Dr. Kim removed the little bit of tape over Cal’s incision; asked if the Ptld V.A. Oncology Dept. had called us re: radiation treatments (it hasn’t), and said to call if we hear nothing by next Thurs.   He said Cal had Stage 4 cancer and the radiation would give him ‘months.’  Of course, I’m expecting a lot more than months.  I called the Naturopathic Clinic on SW Corbett and Porter just now and got an app with one of their 2 docs who provide the high potency Ascorbic Acid IV’s.  He’ll go to see a Dr. Fuller tomorrow at 2:00p.m.  God is Good and all is well at the Stout house.

Sherill is the one who first told me about the results.  She said when Mom told her this news, Sherill said she wasn’t surprised since prior to the surgery the doctor had talked about “quality of life”.  Mom told her that she had not wanted to hear that so she had been thinking Cal would be cured by the treatments.  These high potency vitamin C infusions are something she’s read about that have shown results even with stage four cancer patients.  Please continue to pray for Cal and Donna Stout as they try, against all natural odds, for a cure.