This morning after a breakfast of garbanzo bean and coconut flour pancakes and home made sausage and raw milk at the house, Mark and I got the RV and car moved.  We had to leave the car in the pasture with Folger (the horse).  It was hard enough as it was to get the RV in behind the guest house and get it plugged in. 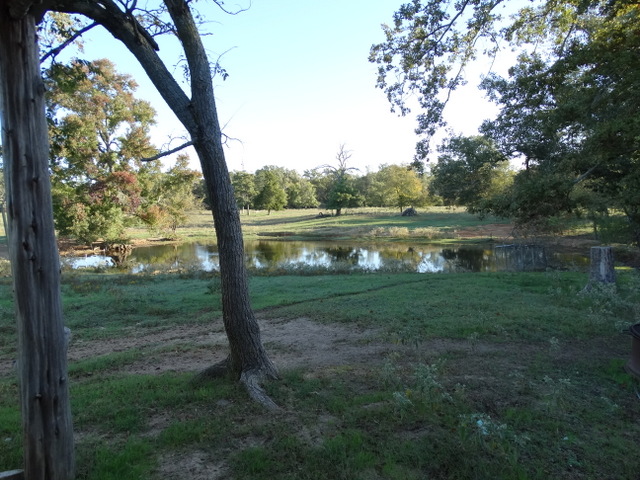 The view outside the cabin when we got up this morning 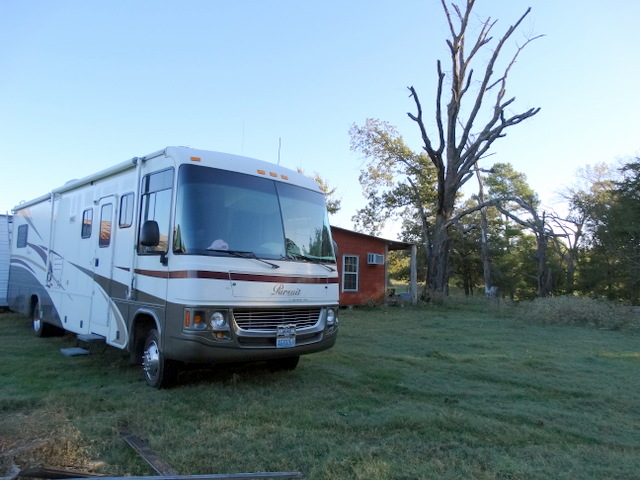 Our RV parked behind the cabin

Then we were ready for work.  Karl had kept a calf from its mother last night so that he could milk the mother this morning.  He had me take the can full of milk to the garage of the house and then I helped him pour it into two gallon-sized jars.  He let me drink a little out of one of the jars.  It was very sweet!

Every animal on the farm has a job.  There are a couple cats that keep the mouse population down.  There are two dogs.  Willie helps shepherd the animals and Stewart is the watchdog at night.  He makes sure no predators come onto the farm to injure or steal the chickens and guineas and ducks.  There’s also a brilliantly colored bird named Sunshine whose job is to keep Nancy company.  The bird is called something like a sun parrot and she’s very friendly and loveable.  I had to rescue her one time when the guineas frightened her while she was out of her cage.

Karl needed help “processing” the cows.  First I got to drive a little lawnmower-sized tractor pulling a cart behind to get some chairs and a table.  I was so proud of myself for being able to figure out how to strap the table onto the cart so it wouldn’t fall off.

I set the table and chairs up in a little fenced in area and that was where I sat with a clip board, taking notes about what all Karl did with the cows.  Karl carefully explained to Mark and me how to get the cows to move.  We let the cows into the area around where I was going to be sitting and then shooed them into a narrow area where they had to stand in line.  Mark was in charge of kind of pushing them forward. 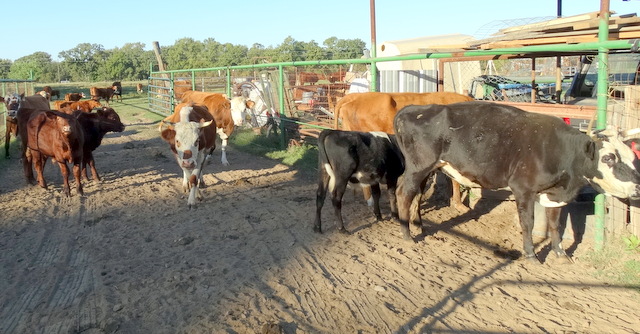 One cow at a time, Karl would let them into a metal contraption where they could barely move.  Then he’d open a door in front of them, and as soon as they tried to get out, he’d shut it around their neck to hold them in place.  Some of the calves who had not really been around humans till today were so frightened that they’d try to move anyway and Karl had to wait for them to calm down.  He did various things with them.  He drew blood from the tails of seven of them.  One he put a long plastic glove on and reached inside her almost up to his shoulder to have a feel around.  Most he had to tag in the ears and put something on their backs to repel flies.   He gave them shots for worms.  Then he’d release them and send them to another pen before letting another cow (or bull) in.

At one point during this process he saw that a couple cows jumped over a fence in the pasture, so he took his trained dog, Willie, and Mark and I out to the pasture to try to get all the cows down there back to the holding pen.  He taught us how to move our arms and where to stand to get them to move, but Willie was the real expert.  Karl would call commands out to Willie and he would slowly creep up behind the cows, or nip at their heels, or lay down and not bother them.  With his help, we got a bull, a cow, and three calves rounded up and brought back to the pen.  Karl was still missing one, but he had to let it go temporarily.

Once he had the cows processed he gave me a paper and sat me down in the house to transfer my notes to the paper.  Then Nancy helped me wrap up the vials of blood Karl had taken to be sent to a lab to be tested.  After that it was time for lunch.

We had beef with onions, quinoa with spices, pickled beets, and a dessert of a pear half set on a bread pudding and filled with sour cream over which was drizzled lingonberry preserves.  The others had iced tea, but I had a glass and a half of well water.  I was thirsty!

This afternoon Mark continued to help Karl process the cows which also entailed taking some of the bulls to the vet to be “steered”.  That means they got fixed.  Mark said that first the vet cut their tubes and then he used a drill with a clamp to wind them up and yank them out.  Mark demonstrated to me how the bulls eyes would get big and they’d bawl out.  He said one of them got so mad it charged him and the vet.  At that point Karl also had the vet remove its horns so it couldn’t hurt anyone too badly.

While they were doing all that, I spent the afternoon with Nancy in her garden.  We dug two long rows and I planted garlic and cauliflower till the sun went down.  I’d put the garlic in the ground so it was just barely showing above the dirt and then I’d put compost over it by hand.  At one point I said, “I probably shouldn’t ask, but what’s in this compost?”  Nancy said it was manure and I said I’d be sure to wash my hands very well before dinner!

Dinner was soup with chicken bone broth in it, and for dessert we had little chunks of healthy chocolate cake topped with frozen yogurt that Nancy had made.  One of her businesses is as a chef and she prepares meals that she delivers to people’s houses.  She’s a good cook.