This morning we tried Crosspoint Community Church which is only a few blocks away from us.  It meets on the bottom floor of a dance studio so it already doesn’t look much like a church, but the people also dressed very casually.  There are probably about twenty or thirty people in the congregation.  The band isn’t the best, but at least they did a mix of modern choruses and hymns with a beat.  The sermon was adequate.  It was no Saratoga Federated, but then again, it wasn’t like the churches I tried in Gore.  The people were friendly and I could settle there for a month and a half.

We came home and had lunch and changed clothes and then went on an adventure.  I have been wanting for several years to show Mark the Black Rock Desert, and now we live about a two and a half hour drive from there.  I wanted to show it to Mark as early as possible because I knew that the longer I waited the less likely it would be that we could go out on the playa.  So we jumped in the car and went.

The ride there was through a lot of barren wilderness; mountains, sage brush and sand.  Mark said it would be a great road for a motorcycle ride.  Then we came to Gerlach.  It’s a town that’s even tinier than Gore.  It doesn’t even have it’s own grocery story.  Mark laughed when he saw the sign as we came into town that said “Gerlach: the center of the universe”!

We drove a little farther.  I’d programmed the longitude and latitude coordinates of the place I wanted to go from a Portland State Aerospace Society (PSAS) web entry.

At this point I should explain why I was so eager to show this desert to Mark.  When my son, Jamey, was a teenager, he got involved with the PSAS.  He’s still highly involved with the group.  It’s a group at Portland State University that builds and tries to launch really sophisticated rockets.  What distinguishes their rockets from amateur rockets is the complicated electronics they put in their rockets.  Jamey’s part is programming the computer launch.  There are only two places the group tests their rockets.  One is in eastern Oregon near Bend but out in the desert.  The other is the Black Rock Desert here in Nevada.

Two times in my life I’ve been privileged to go with Jamey to the Black Rock Desert.  The first time we traveled all day from Oregon and got to the playa (a dry lake bed) after dark.  There were five or six cars in our convoy and one had the GPS coordinates for where the rocket launch was set up.  People from all over the country, and sometimes even from other countries, go to the center of the Black Rock Desert to test their rockets, but you can’t see the location from the road, even in the daytime.  In fact, by some trick of the desert, you can’t see the whole encampment until you’re practically on it.  So my first night there, we spread out like a flock of geese and the car at the point followed the GPS settings to find the encampment.  We were at the left tip of the wing, and with the dust being kicked up there were times I couldn’t even see the other tail lights.  It was kind of scary because it seemed we could be lost in the middle of the desert.

We pitched our tent in the dark and went inside to sleep.  The next morning I pulled on my clothes and poked my head out of the tent door.  It was the most amazing thing I’ve ever seen.  It was like I’d awakened on the surface of the moon.  There’s no vegetation and absolutely no bugs out there!  There was a long line of campers from many groups who were there to launch rockets.  The launch sites were quite a way away from the line of people.  Our group was frantically working to get everything ready for their launch, but periodically someone else would send a rocket up.  We wives and parents visited and got to know each other while the PSAS members were all busy.  We prepared meals for them.  It was a fond memory for me.

The second time we went to the Black Rock Desert, we spent the entire weekend in a sand storm.  The group had put a tarp up on the windward side to keep the sand from blowing in, but there was a gap at the bottom and our ankles got sand blasted.  Still, we were all in good spirits.  I drove us out at the end of the weekend, and couldn’t see where I was going until we were back to the road.  As we were driving down the road through the mountains, I came around a corner and there was a whole herd of cows on the road in front of me.  There were several cowboys on horseback and one of them rode up to my window and said he would make a path for us and we should follow him.  Sure enough, he rode his horse through the cows and they parted like the waters of the Red Sea.  I later learned that that horse was a “cutter” horse.  Most horses don’t walk backwards but only forwards.  Some horses are taught to walk backwards as well and the cows know that if they try to close in behind the horse the horse will walk backward, so the cows give up and stay parted.  Another fond memory.

These rocket launches go pretty high, so in order to put on this annual event, the event planners get special permission from the FAA for a specific period of time, say Friday afternoon through Sunday at noon.  This is strictly observed because the FAA has to steer jets on a flight plan that takes them out of the way of any of these rockets, just in case!

I believe the annual event is held in early September.  After the long hot summer the playa is dry, but later in the year it fills with water and becomes a lake.  My concern was that there might be water on the playa when we got there today.  It looked okay and Mark cautiously drove out onto it.  We drove out as far as we could before he got too nervous to go further.  We got out of the car at that point and took a couple pictures.  We could tell that the ground was already slightly moist and softened.  Fortunately it held for us to get back.

Here are the pictures: 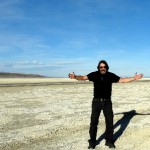 There’s nothing out here! 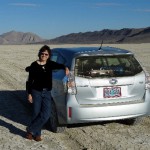 Can you see the dust on the back of our car?